Pfizer has issued a voluntary recall of four ounce bottles of its bubble gum-flavored liquid Advil for children over concerns after customers complained that its mismatched dosage information could lead to overdoses.

A batch of the drinkable medicine has dosage marked in milliliters (mL) on the instruction label, but in teaspoons on the dosage cup.

In its recall statement, Pfizer admitted that the confusing labeling could cause lead parents to accidentally give their children an overdose of the medication.

It is now urging families across the US to throw out the poorly marked medication and its packaging, and instructing stores to pull it from the shelves. 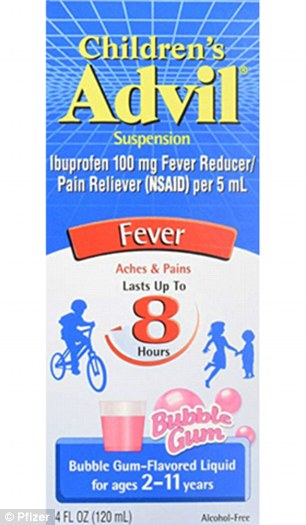 The dosage cup that comes with Pfizer’s drinkable bubble gum-flavored Advil for children is in teaspoons (left) but the package directions  (right) are in milliliters, leading to confusion and, today, a recall

The fledgling immune systems of young children are vulnerable to all manner of infections, so fever reducers that don’t pose choking hazard are a crucial part of many families’ medicine cabinets.

But dosing medications like Advil properly is even more important for kids, whose small bodies can easily be overloaded, even by the relatively safe drug.

Too much of the medicine can cause drowsiness and nausea, vomiting, drowsiness, dizziness, headache and blurred vision.

If too high a dosage is given repeatedly – especially if done too close together – Advil can be corrosive to the gastrointestinal tract, causing stomach ulcers and bleeding.

In the most extreme cases, an overdose of a non-steroidal anti-inflammatory drug (NSAID) can even cause kidney damage, seizures and coma in children.

And even with clear labeling, parents and caregivers are already prone to accidentally giving their kids the wrong dosing of medications – especially liquid ones.

A 2016 study published in the American Journal of Nursing found that given nine tries, 84 percent of parents made errors when meting out doses of liquid medication.

The majority of those mistake (86 percent) were overdoses.

Parents were more than four-times more likely to give improper doses of a medication when they used teaspoon-marked measuring cups – like those included with Pfizer’s drinkable Advil packages – than when they used syringes labeled in milliliters.

‘Pfizer concluded that the use of the product with an unmatched dosage cup marked in teaspoons rather than milliliters has a chance of being associated with potential overdose,’ the drug maker said in a statement.

Pfizer has instructed wholesalers, retailers and distributors to stop selling the medication and ‘quarantine any existing inventory.’

Parents might consider throwing out the confusing product, and should call their health care provider and Pfizer with any concerns over its liquid Advil.