Bullseye host Jim Bowen was laid to rest at a private funeral – while fellow comedian Sir Ken Dodd had his packed memorial service, it was revealed yesterday.

The one-time PE teacher began his stand-up career in the 1960s and was best known for hosting ITV darts show for 14 years between 1981 and 1995. 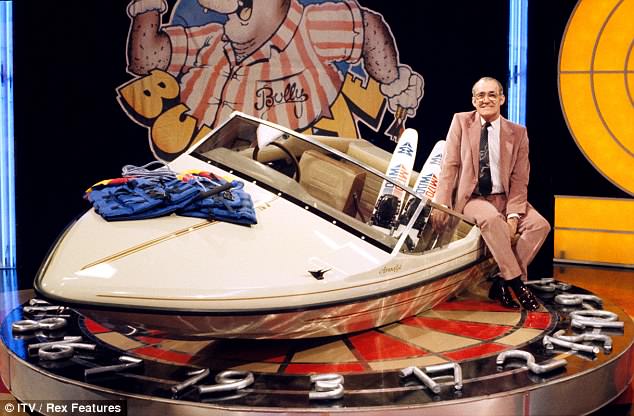 Bowen, 80, passed away on March 14 having suffered a number of strokes in recent years 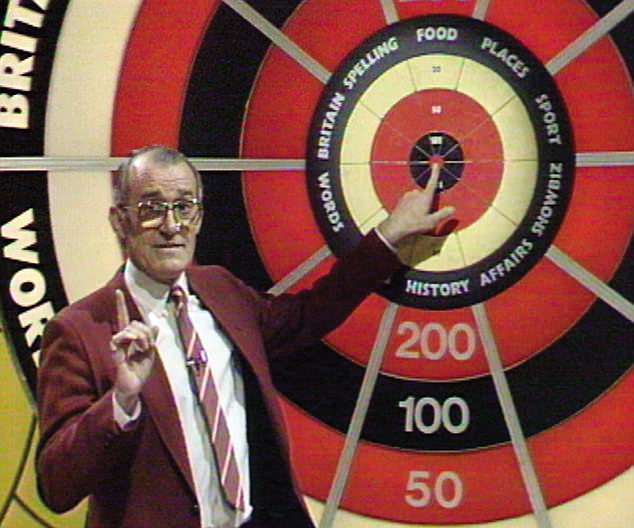 But on Wednesday as Sir Ken enjoyed a packed service at Liverpool Anglican Cathedral, Bowen had a private crematorium service for family and close friends.

An announcement on Wednesday on the official Bulleye Facebook site read: ‘With permission from Jim’s wife Phyllis, we are able to announce that Jim Bowen’s funeral took place this afternoon at Beetham Hall Crematorium, Milnthorpe, Cumbria.

‘The celebration of Jim’s life was attended by close family and friends and was a heartwarming, loving and incredibly moving send off for Jim.

‘A truly fitting service to say our fond farewells to a super, smashing, great husband, father, grandfather and friend, who was loved by millions.’

Before Bullseye, Bowen trained as a PE teacher – where he met his wife Phyllis.

He later became a deputy headmaster before giving it up to become a comedian on the northern club circuit. 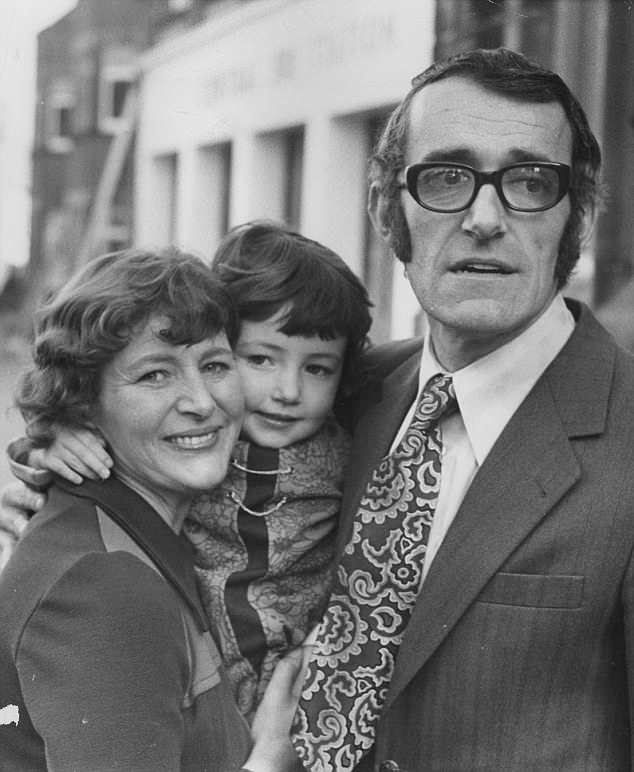 Bowen, pictured here with his wife Phyllis and daughter Susan, had originally trained as a PE teacher and became a deputy headmaster before quitting and joining the comedy circuit 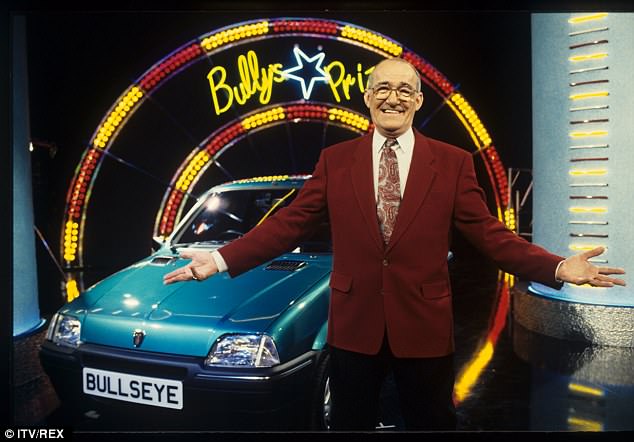 In a statement released on the official Bullseye Facebook page: ‘The celebration of Jim’s life was attended by close family and friends and was a heartwarming, loving and incredibly moving send off for Jim’

Born on the Wirral to an unmarried mother, he was adopted as a baby and brought up in Accrington by Joe, a brickworker, and Annie, a weaver in a mill.

He was named after his father’s friend, who died in the First World War. He went onto have his own children, Pete and daughter Susan.

He was first appeared on our screens, in Granada TV stand-up show, The Comedians, alongside Bernard Manning, Stan Boardman and Mike Reid.

He was hugely popular with audiences and was asked to host a new darts-based game show but always admitted his failings as a slick show host.

He once said: ‘I was so poor at the game show game.

In 1997, he was given a hero’s welcome at the Oxford Union when it drew 1,200 people – the biggest crowd for four years – and they chanted ‘Jim, Jim, Jim’ while stamping on the floor.

When the shouting ended, Bowen began: ‘Mr President, distinguished audience, thank you for that. But may I say I do feel you’re taking the p*** a bit.’Bowen once admitted that getting the Bullseye job was ’90 per cent luck’.

He has also previously said: ‘I always said the game was the star. It was downmarket, but accessible. Joe Public could identify with my fallibilities.

‘Game shows today are too high-tech with a £1 million prize. The nice thing about us was they were excited if they won a toaster.

‘But that was 31 years ago when not every household had a toaster. People lose sight of that.’

In 2011, Bowen, also known as Alf in the Tetley Bitter adverts, said he had learned to ‘appreciate all the things in life’ after suffering two strokes..

But in August 2015, he admitted he would never work again after suffering his third debilitating stroke, leaving him struggling to walk or even talk. 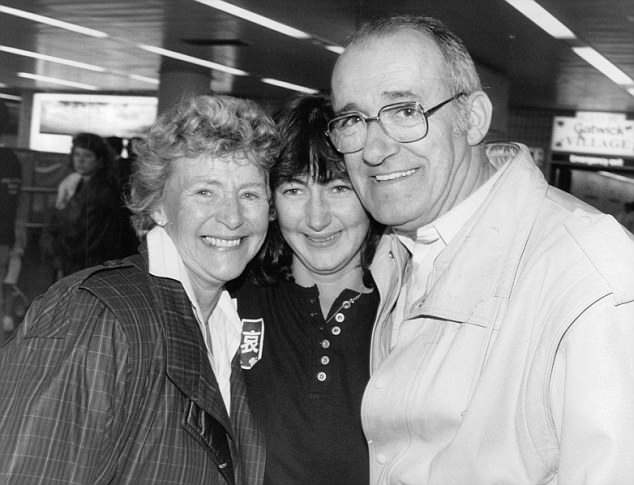 Bowen, pictured with his wife Phyllis and daughter Susan, once complained about the size of jackpots on modern-day game shows suggesting contestants on Bullseye were happy with a a toaster. He added: ”But that was 31 years ago when not every household had a toaster. People lose sight of that’

He said at the time: ‘I’m still here. And I have had a good life.

‘I’m struggling with my speech now and I am walking with a stick. But the people I meet are very caring.’

Bowen, who often enjoyed three or four pints a night at his local village pub, also had emphysema from his 80-cigarettes-a-day habit, which he quit in 1973.

When news broke of his death earlier this month, moving tributes flooded in not just from darts stars and comedians – but contestants on his hit TV show.

‘I done every year of Bullseye and ten Xmas shows and had 15 days with him on the QE2.

‘I played Darts in the afternoon and he played with his band at night. We had some late nights, ha ha. Great memories. #RIPJimBowen.’

It was presented by Jim Bowen, and co-hosted by commentator Tony Green.

Its mascot was named Bully – a bull in a red and white shirt and blue trousers.

Watched by 17million viewers, it involved three pairs of contestants to win prizes on the throw of the dart.

Players competed for Bully’s star prize, which could be a new car, a speedboat, a caravan, or a luxury holiday.

Bullseye was revived for a new series in 2006, for Challenge. It ran for 30 episodes and was hosted by comedian Dave Spikey.

And boxer Frank Bruno added: ‘Great comic. We worked together many times, had a lot of laughs together.

‘Jim and Ken Dodd, sad time for the entertainment industry.’

Former World Professional Darts Champion Keith Deller said: ‘So sad to hear the news of my friend Jim Bowen who passed away. I was very fortunate to go on Bullseye many times.

‘It was great to be one of Jim’s guests on his This Is Your Life.

‘He always made you very welcomed and he made Bullseye the great show it was. RIP Jim.’

And ex-contestant Kevin Painter tweeted: ‘Thanks for the memories Jim… even managed to grab a Bendy Bully from my time there. Super, smashing, great..’