A wealthy member of an elite sex club has been kicked out for inappropriate behavior – and forfeited his $75,000 a year membership.

Phuong Tran, who is also known as the Bunnyman, was accused of ‘disgusting behavior’ by Snctm which took the extraordinary step of publicly naming him and releasing his picture.

Tran is said to have been ‘mean-spirited’ and ‘exploitative’ and sent messages on Instagram to the 12-year-old daughter of a Snctm founder which left her upset.

According to a profile in Esquire Tran is 34-year-old Vietnamese immigrant and was the very first person to buy a Snctm membership.

He described himself as sexually repressed until he attended one of the events and is now so liberated that he wears a black leather mask and rabbit ears when he’s partying.

Phuong Tran, who is also known as the Bunnyman, was accused of ‘disgusting behavior’ by Snctm which took the extraordinary step of publicly naming him and releasing his picture (seen above) 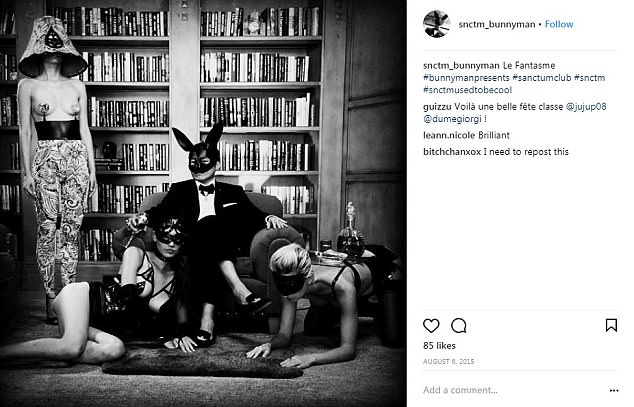 Snctm’s decision to publicly name Tran – an apparent breach of its own rules regarding secrecy – speaks to the extent of the rift between the two parties.

Snctm parties in Beverly Hills, Los Angeles and New York for the ultra wealthy and the beautiful where they indulge their fantasies with lovers and strangers, often in view of others.

The events have been called ‘Hollywood’s most elite sex party’ and attendees include actresses, billionaires and executives.

In a release to its members, Snctm said that Tran was losing his Dominus membership, which costs $75,000 and is only available to 20 people worldwide.

Basic memberships cost $20,000 each year and three individuals have the Violet Key Benefactors which are a one time payment of $1million.

In a statement Snctm said: ‘Phuong Tran aka the Bunnyman has been banned for life from the club for behavior unbecoming of a Snctm member.

‘He was stripped of his Dominus membership, and will never again be seen walking our hallowed halls.

‘Nothing he says may be relied upon, and he is now outside our circle forever. We won’t tolerate mean-spirited or exploitative behavior towards others at Snctm, even from our highest ranking members.

‘Yesterday Phuong stooped so low as to contact our founder’s 12 year old daughter on Instagram with messages that hurt her deeply. This was the final straw.

‘We feel it necessary to shine light on his disgusting behavior, taking the extraordinary step to expose one of our former members so that our growing community knows to avoid him.

‘We have never done this before. Phuong’s actions are despicable, and we are compelled to announce the truth’.

It would have got him entry the private ‘Oculus Dei’ lounge at Masquerade events.

Scntm says that ‘inside this elite sanctuary ‘awaits decadent indulgences many will never know’. 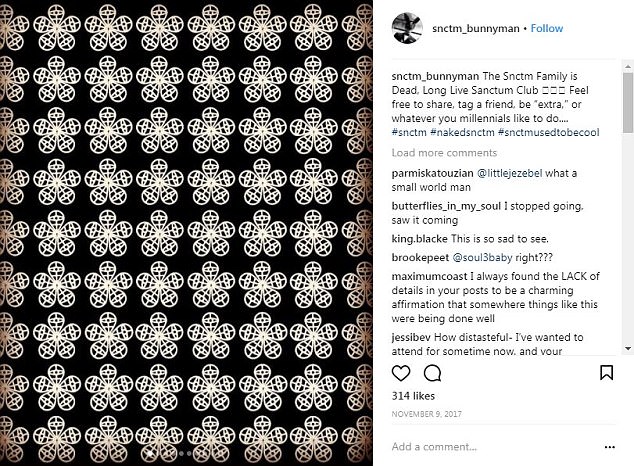 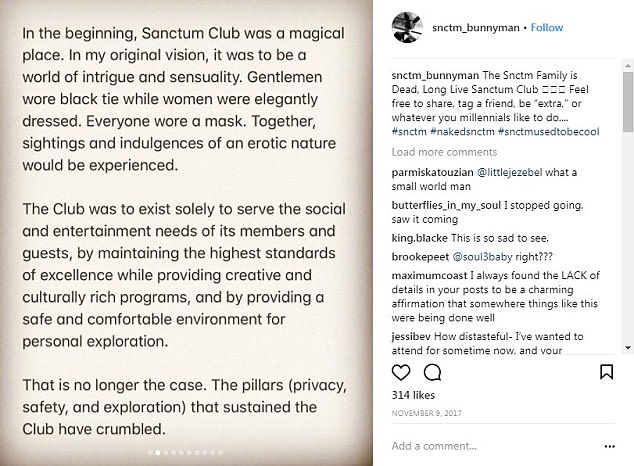 The same account issued a statement in November saying that ‘The pillars (privacy, safety, and exploration) that sustained the Club have crumbled’

An Instagram page which has the handle snctm_bunnyman, appearing to belong to him is filled with pictures of women bound by ropes or scantily clad in just their underwear.

Posts shared to the account in November paint a picture of a member disgruntled with the club. One was captioned: ‘The Snctm Family is Dead, Long Live Sanctum Club. Feel free to share, tag a friend, be “extra,” or whatever you millennials like to do….’

‘The Club was to exist solely to serve the social and entertainment needs of its members and guests, by maintaining the highest standards of excellence while providing creative and culturally rich programs, and by providing a safe and comfortable environment for personal exploration.

‘That is no longer the case. The pillars (privacy, safety, and exploration) that sustained the Club have crumbled’. 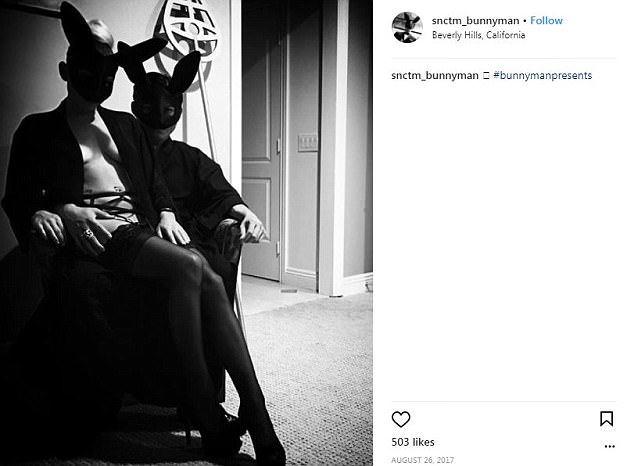 Masked: This snap shared to Instagram was hashtagged ‘bunnymanpresents’ 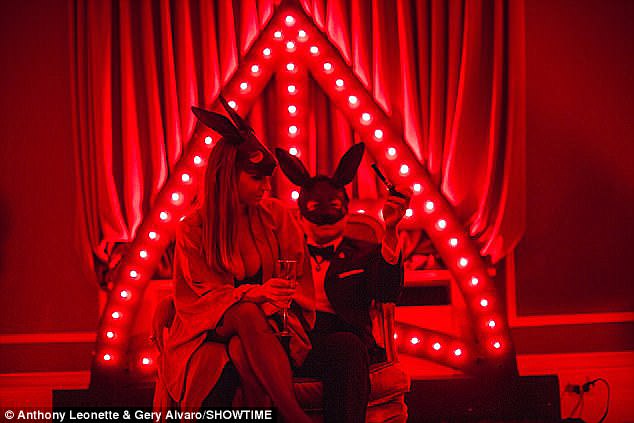 A provocative documentary series aired on Showtime last year offering a candid look behind the scenes of the club. A still from the show above 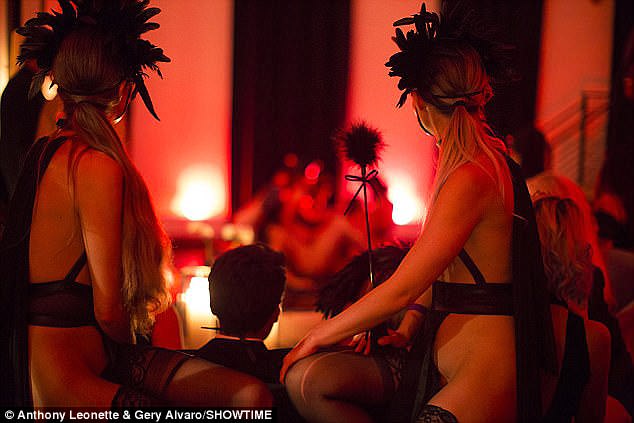 He complained that it is more like a ‘college house party’ and there are no longer any ‘intimate moments’.

It also says that allowing TV cameras in to film a show was an ‘appeal to the lowest common denominator’ and that it is no longer an ‘elite’ club.

A provocative documentary series aired on Showtime last year offering a candid look behind the scenes of the club.

Lawner, 45, who is a father-of-two and divorced, founded the club four years ago. 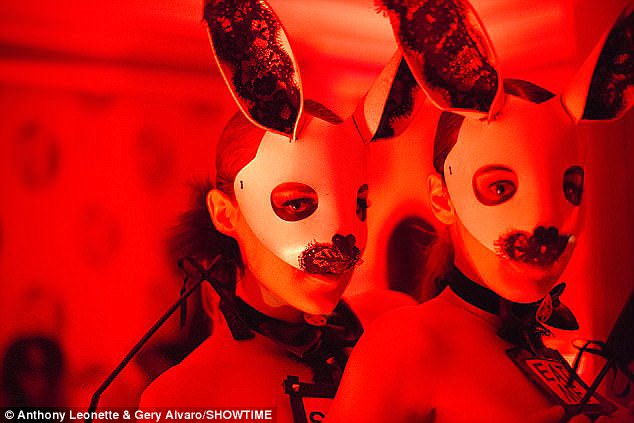 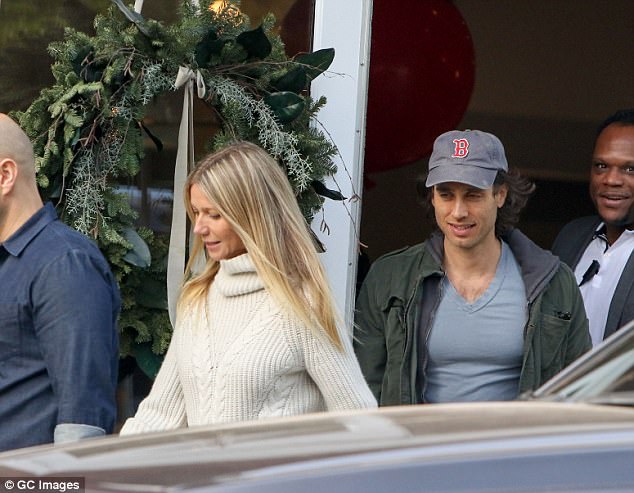 The founder of SNCTM previously claimed its members include Grammy-winning artists and said Gwyneth Paltrow has attended their parties with her boyfriend, Glee producer, Brad Falchuk

The founder of SNCTM previously claimed its members include Grammy-winning artists and said Gwyneth Paltrow has attended their parties with her Glee producer fiance, Brad Falchuk.

Lawner said he and his staff are banned from engaging in sexual activities during their events, but, according to an article published in the New York Post last year, he likes to watch.

The club hosts monthly adult black-tie costume parties, private dinner soirees and summer pool parties where female guests can come dressed in a bikini, or opt for their birthday suit.

The Esquire profile describes Tran as somebody who likes to ‘geek out’ on a subject until he becomes an expert.

His hobbies – aside from Japanese bondage techniques – include fine Scotch whiskey, cigars and tobacco pipes and Post WWII art.

Tran said that he joined up ‘because some of my friends were in other private social clubs, like the Johnathan Club and the California Club, and I wanted to be able to reciprocate with something a little different’.

Snctm was founded in 2012 by entrepreneur Damon Emanuel Lawner who has said in previous messages to members that it is ‘comprised of respectable individuals from all walks of life, dedicated to enriching our Grand Playground’.