Tension has arisen in the Cabinet again as Justice Secretary David Gauke claimed a no-deal Brexit would be ‘pretty disastrous’.

The MP also suggested he backed parliament being given a free vote on extending Article 50 when amendments to Theresa May’s withdrawal bill are debated in the Commons next Tuesday.

His comments came after Commons Leader Andrea Leadsom stressed the need for Cabinet unity on the possibility of a no-deal exit.

When asked if he believed it would be ‘pretty disastrous’ for the UK to leave the EU without a deal, Mr Gauke told the BBC: ‘Yes, I do.’

The Justice Minister also said he would need to ‘consider his position’ if a no-deal policy was adopted when other options were available.

He said: ‘What I have said repeatedly is if there is a conscious choice “right, that’s it, we’re going no deal” when there are other options available, that would be something I would find extremely difficult.

‘And, given the requirements of collective responsibility, then, obviously, I’d have to consider my position.’ 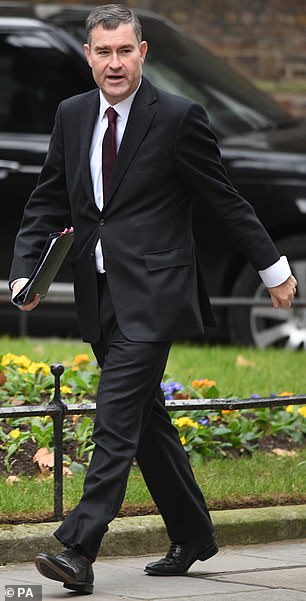 Pressed on whether he backed MPs being given a free vote on extending Article 50 when amendments to the Government’s Brexit motion are debated in the Commons next Tuesday, Mr Gauke said: ‘I think there is a case for free votes in this area to resolve things.

‘We need to see what all the amendments are going to be to see whether Tuesday is a crunch point or not.

‘I do think that Parliament is entitled to be involved in this process.’

His comments came as Mrs Leadsom signalled that the UK could remain in the EU beyond the scheduled March 29 exit date.

The Commons Leader told BBC2’s Newsnight: ‘We can get the legislation through.

‘And in particular I think we do, in spite of everything, have a very strong relationship with our EU friends and neighbours and I’m absolutely certain that if we needed a couple of extra weeks or something, that would be feasible.’

Mrs Leadsom said that with ‘good will’ the necessary legislation could go through parliament on schedule.

She said: ‘I’m totally aligned to the Prime Minister. I believe that is where collective responsibility should lie.

‘So number one, the legal default is we leave the EU on March 29 without a deal unless there is a deal is in place.

‘That hasn’t changed. That is the Prime Minister’s view and that’s my view.’

Mrs Leadsom’s comments came after Chancellor Philip Hammond declined to rule out quitting his post if the UK goes through with a no-deal Brexit.

Mr Hammond said a no-deal Brexit would cause ‘significant’ disruption and damage to the economy, and that it went against what Leave voters had been told before the 2016 referendum.

Ireland’s Europe minister, Helen McEntee, insisted that a backstop to prevent a hard border was ‘absolutely necessary’ due to the UK’s red lines on leaving the single market and customs union.

The backstop would see the UK obeying EU customs rules if no wider trade agreement is settled after a transition period.

Ms McEntee told the BBC: ‘It is because of those red lines that a backstop is absolutely necessary.

‘I think now, for some reason, the onus by the UK has been shifted back on Ireland. That we should compromise. That we are the ones that are trying to be awkward or difficult. 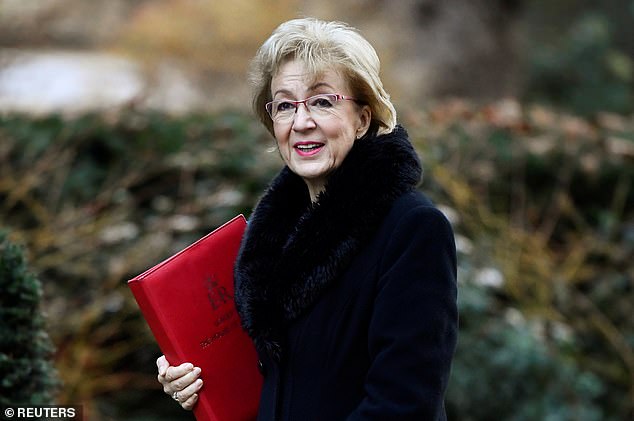 ‘We are protecting a peace process. There is an obligation on the UK to ensure that the peace process, the Good Friday Agreement, is protected.

‘And any suggestion that they can walk away from that, we simply won’t accept that.’

Tory MP Andrew Murrison, who has tabled a Commons amendment requiring the backstop to be ‘replaced with alternative arrangements to avoid a hard border’, called for movement from Dublin.

He said: ‘The crucial thing here is it’s not for a period of time – it doesn’t allow us to get out after a while – it’s potentially forever. And that’s the problem.

‘And that’s why my amendment would seek to put a sunset, as it were, on that part of the agreement.’

He added that limiting it to five years could work. He said: ‘The Polish foreign minister, very helpfully, suggested five years. That seems not entirely unreasonable to me.’

Mr Murrison added: ‘Dublin needs to understand that if Brexit goes wrong then the UK will not prosper. But the effects in the Republic are going to probably be even worse.

‘So, it is in all of our interests to make sure that what happens is good for us all, including the European Union.

‘That means getting this deal over the line.’