Call the Midwife fans have praised the show for sensitively handling a storyline that saw Nurse Crane come to the aid of an immigrant woman who was resisting treatment due to embarrassment.

Phillys Crane, played by  Linda Basset, is one of the central characters of the BBC One show following the lives of the fictional nurses working in Poplar in 1960s Britain.

In last night’s episode, she met with Mrs Mohamed, a Pakistani mother-of-two who was suffering with a post-natal fistula, which caused her to lose control of her bladder and unable to leave her flat.

She had only recently arrived in the UK, but her husband, scared off by her illness, had ‘moved in with friends’, complaining that his wife and their flat smelled of urine.

In a particularly touching moment, the nurse had the perfect response when Mrs Mohamed said she felt ‘dirty’ because of her infection, saying ‘You’re not “dirty,” you’re unwell, and there’s no shame in that.’

Viewers adored Nurse Crane’s sensitive and kind attitude towards her patient throughout the episode, as she helped her get an appointment with Dr Turner and examined the patient herself to make her feel at ease. 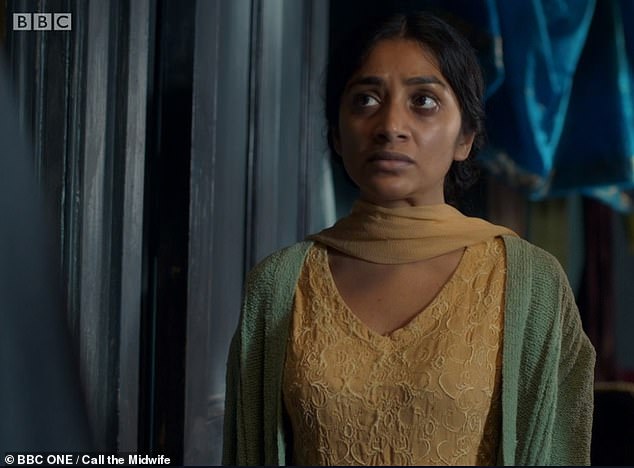 Mrs Mohamed was ashamed of her condition, which caused her to lose control over her bladder, and said she was dirty

Initially, Nurse Crane, who had met Mrs Mohamed’s two boys at school, went to visit her to inquire about the children’s vaccinations. She realised the mother-of-two was not well when she caught a glimpse of her loose trousers, which were wet.

‘Mrs Mohamed, I’m very worried about you,’ Nurse Crane said. ‘Are you having trouble getting to the toilet?’.

But when she warned Mrs Mohamed she could be suffering from an infection and needed to come to the surgery, the mother-of-two refused, apparently distraught.

Mrs Mohamed revealed through choked up tears that her husband had left her and was ‘living with friends,’ because he thought the ‘smell was very bad,’ and that she felt dirty. 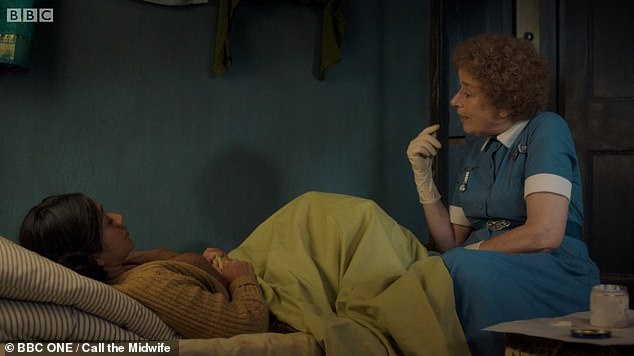 Nurse Crane made sure that Mrs Mohamed got the care she needed and that she was comfortable, going as far as to perform the exam herself

Asking Nurse Crane to go, she then wet herself in front of her guest, which drew her into more panic.

But not deterred by her patient’s distress, Nurse Crane said she would first clean up while Mrs Mohamed changed, and that she would be coming back.

On her second visit, the nurse found that the mother-of-two had a strong fever, and again pleaded for her to agree to see the doctor, which Mrs Mohamed eventually consented to.

Mrs Mohamed explained she had likely contracted the infection after losing her unborn daughter following a home delivery that saw her go through four days of excruciating labour, three months before her move to the UK.

It took a few more efforts to get the woman to agree to a professional examination, including finding her husband to translate for Dr Turner, who shared Nurse Crane’s concerns.

Mr Mohamed, who had first left his wife, scared of her illness, reconnected with her while translating for the healthcare professionals, telling her that he and their children needed her to ‘get better.’

She only agreed to be treated after Dr Turner said Phyllis would be carrying the exam while he waited in the other room. 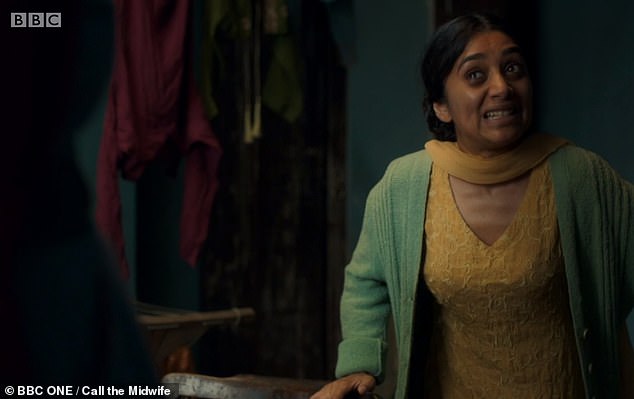 In a moment of panic, the mother-of-two said she was dirty and could not go see a GP when Nurse Crane first visited her 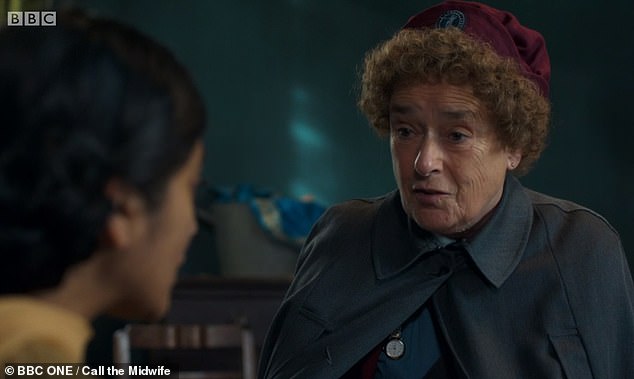 The health professional reassured the mother and told her children needed her, and that she needed help from a doctor

The exam revealed the mother-of-two had a fistula between her birth canal and urethra, which had caused the infection.

She had also reduced her water intake in the hope it would reduce her symptoms, which had worsened her chance of getting a urinary tract infection, as well as making the ordeal even more painful.

Nurse Crane and Dr Turner sat her down for a chat and convinced her to agree to an emergency procedure in hospital.

Viewers of the show loved Nurse Crane’s thoughtful attitude throughout the episode, and said people should be more like her. 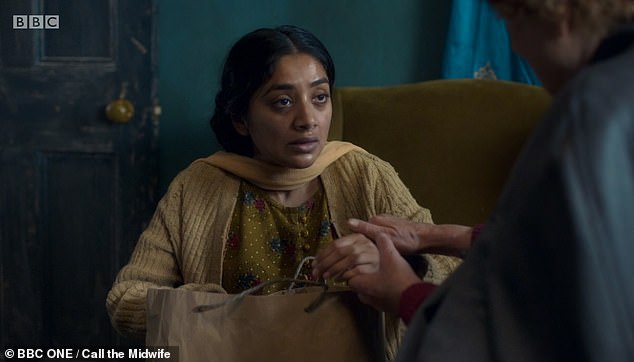 Caring Nurse Crane did not back down and visited Mrs Mohamed a second time, where she realised she had a fever due to her infection 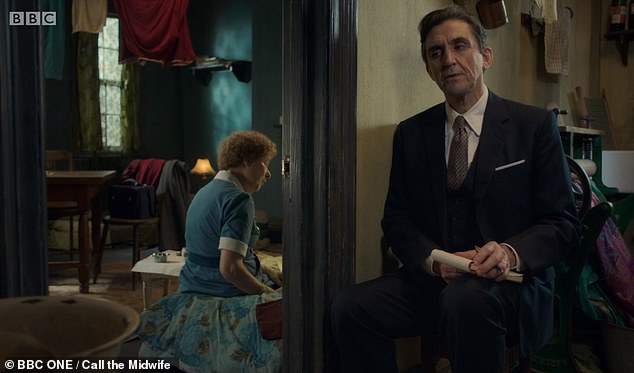 Dr Turner waited in the other room while Nurse Crane performed the exam on their patient, describing what she found (pictured)

‘I love Nurse Crane, she is just the most wonderful caring kindhearted nurse. And I so loved the friendship she had with Barbara and how she is on everybody’s level no matter their age, class, race, religion whatever. Be More Nurse Crane,’ one wrote.

‘I’m always blubbing through #CallTheMidwife. “Brave lass”. This programme explores many of the taboos around childbirth and prejudice. It touches my heart,’ said another.

‘Nurse Crane is my favourite midwife. She’s so lovely in this episode,’ another poitned out.

‘You’re not dirty, you’re unwell, there’s no shame in that.’ – Love Nurse Crane. My grandma as a Bangladeshi, witnessed and talks about how women were made to feel ashamed when they’re unwell due to a lack of education & support. Superb episode & message,’ one wrote.

‘A wonderfully heart-warming story of suffering in silence is never the answer. Another great watch,’ said one 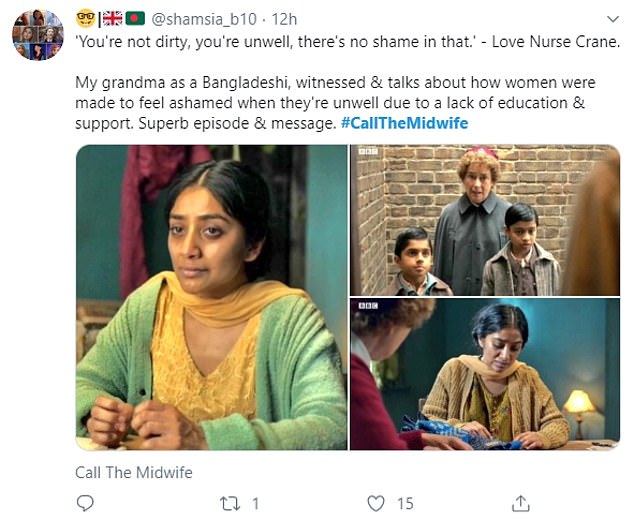