Calvin Klein is now offering shoppers the chance to totally expose themselves — for over $1,000.

In February, the design house presented its Fall 2017 collection, raising eyebrows with a series of sweaters that had entirely sheer panels made out of nylon across the chest, which completely exposed the wearer’s nipples. Even more bizarrely, the sweaters also featured chunky wool sleeves.

Now, those sweaters are actually available to buy for both men and women, and they cost over a grand. 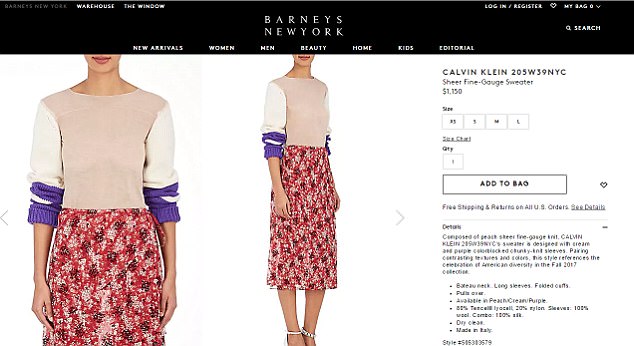 Pricey: They’re currently selling for $1,150 at Barneys, though the store appears to have added an extra layer underneath the sheer panel in front 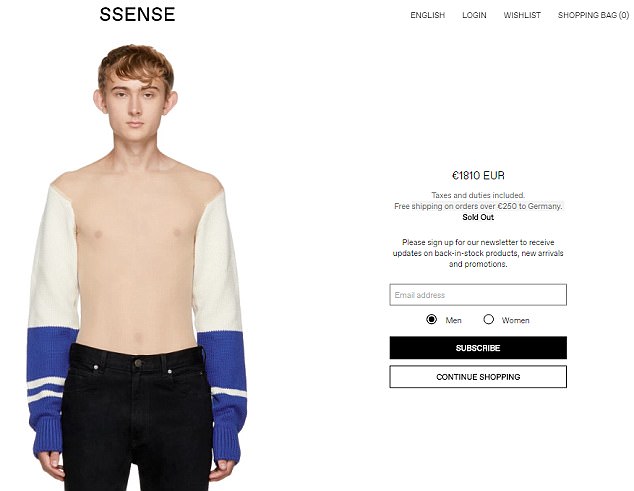 Taxes and duties: The sweaters, which are available for both men and women, are even pricier on some international sites 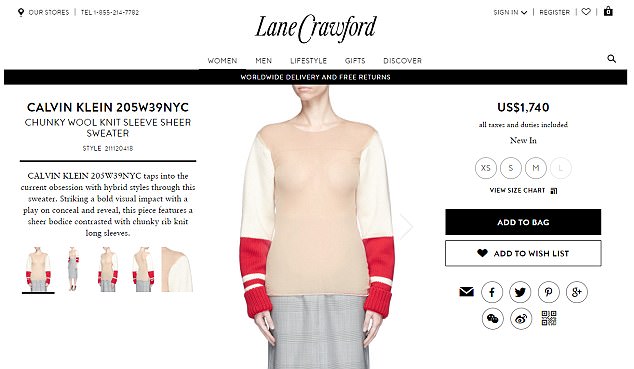 Odd combo: They feature chunky wool sleeves but nylon across the chest

The Fall 2017 collection has hit stores, and while many of the items are incredibly wearable — like the more traditional chunky-knit sweaters — others will only appeal to proponents of the Free the Nipple movement.

With chunky knit sleeves accented with red or purple stripes, the strange sweaters start promisingly enough — but the entire torso connecting the two sleeves is made of a sheer peach nylon, the material stockings are made of.

Naturally, this leaves little to the imagination. But what the sweaters expose is considerably less shocking than the price tag: Barneys is currently selling the sweater for $1,150, while other international sites (which add taxes and duties) are offering them for as much as $2,155.

Even more surprisingly, the men’s sweater that was sold on the site Ssense has already sold out. While it’s unclear how many were carried in the first place, it is certain that at least one was sold. 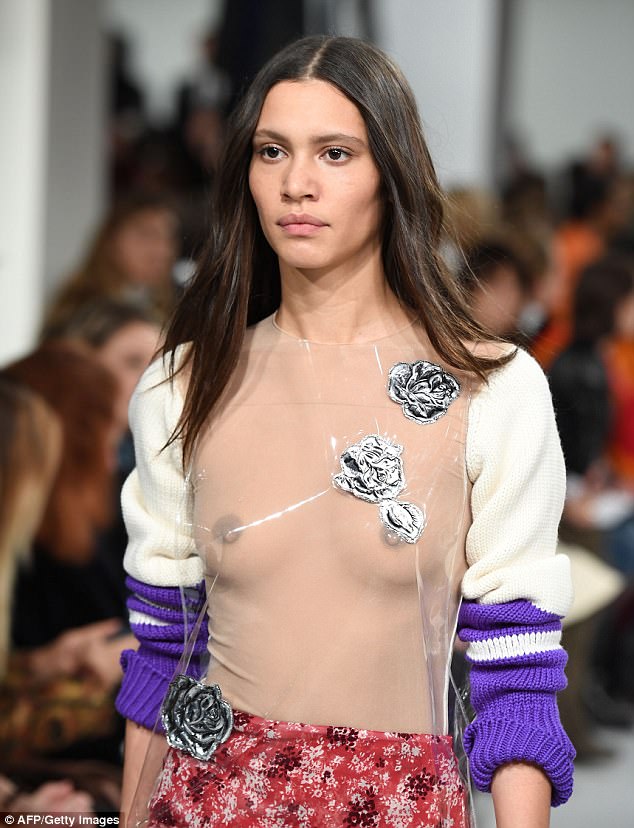 Debut: This was designer Raf Simon’s first collection for the fashion house

See it all: Raf’s sheer sweaters and plastic dress overlays were shocking

The sweaters are part of Raf Simons’ first collection for Calvin Klein, after he left Dior in 2015 and signed on with his new brand in August of 2016.

The fashion crowd buzzed about his new take on Calvin Klein in February, watching models presenting a series of oversized jackets and blazers, pencil skirts, colorful pants, and steel-toed boots.

The most eye-catching pieces, though, were those that were see-through. In addition to the sweaters with sheer fabric, there were several totally clear vinyl dresses.

These pieces — some of which were simple see-through shifts with no adornment, and others of which had floral appliqués — were worn as overlays on other outfits.

The plastic dresses are also now available to buy, with the appliquéd vinyl overlay going for $895. There are also versions with floral slip dresses underneath for $1,595. 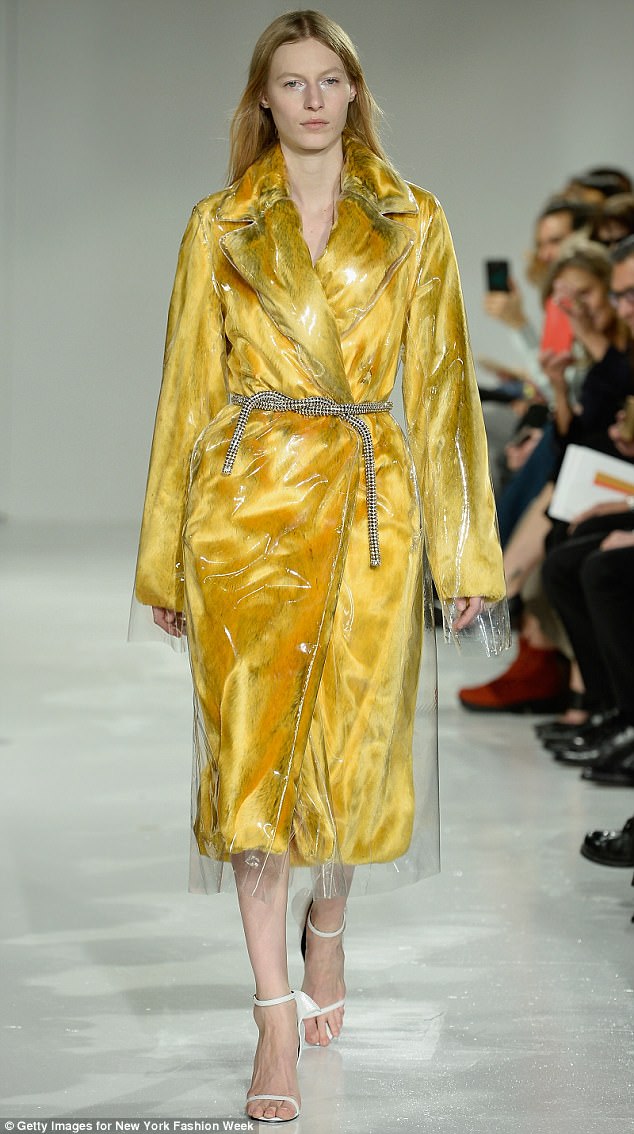 Brave: Several coats were also covered with the sheer fabric, which could block against the elements but also show off cute coats 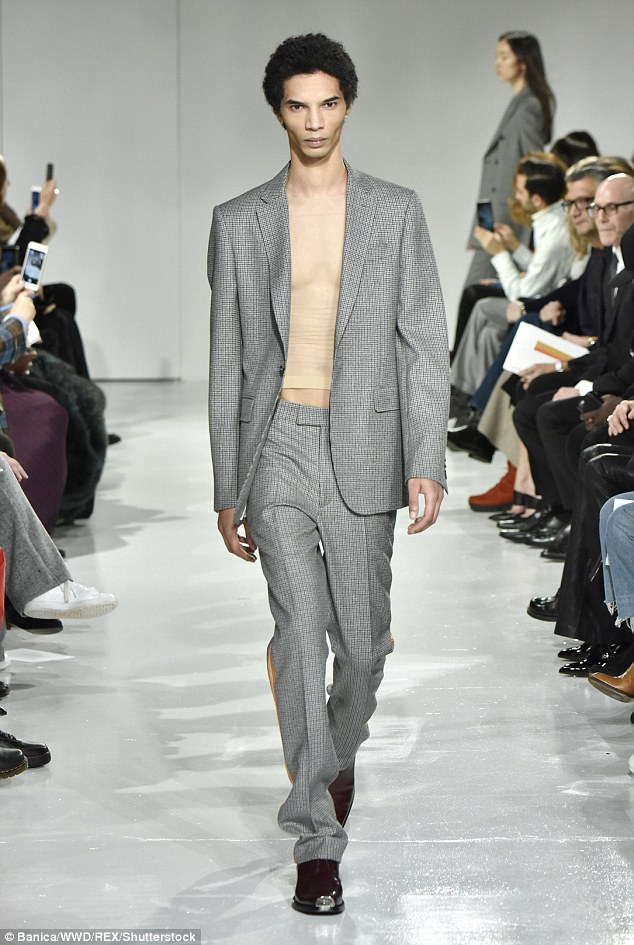 Nothing left to the imagination: Men and women walked in the same show and both wore the sheer tops

Suit up! These suit ensembles are clearly always meant to be worn with jackets, since the tops underneath have cutouts over the breasts

Underboob was visible on models showing off crop tops and skirts

Speaking to GQ, Raf said both his first Calvin Klein collection and his Fall 2017 collection for his eponymous line reflected the way he is inspired by New York, his new home.

He also seemed acknowledged that not all of his pieces are wearable for the masses, saying: ‘Fashion keeps thinking that it can serve everybody, that it can be there for everybody, high fashion.