A Canadian convicted of drug trafficking in China has been sentenced to death, according to a Chinese court, amid tensions over Canada’s arrest of a Chinese technology executive late last year.

Robert Lloyd Schellenberg, 36, was arrested in 2014 on suspicion of smuggling crystal meth, according to the Dalian Intermediate People’s Court. He was said to be caught while trying to flee from China to Thailand.

He was initially sentenced 15 years in prison by the intermediate court in November, but a high court last month deemed the decision ‘too lenient’ and Schellenberg was given the death penalty in an open hearing today.

‘I am not a drug smuggler. I came to China as a tourist,’ Schellenberg, said in his final statement before the sentence was announced. He was brought to the hearing in handcuffs.

Robert Lloyd Schellenberg, 36, was sentenced to death on Monday by the Dalian Intermediate People’s Court. He was arrested in 2014 on suspicion of smuggling crystal meth 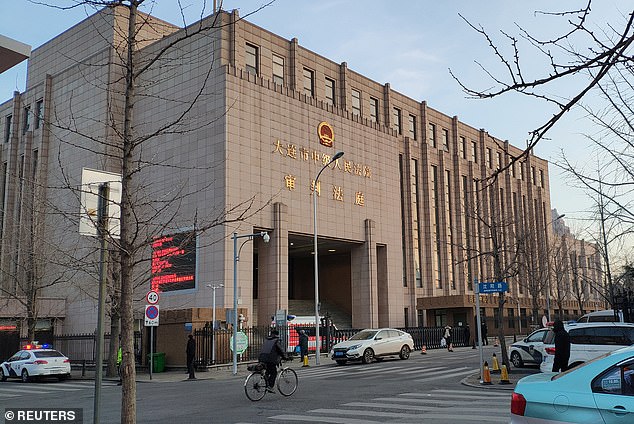 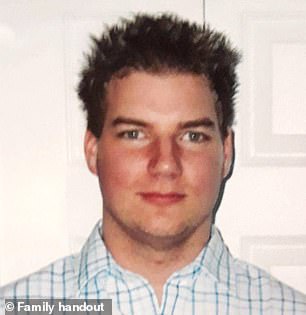 Robert Lloyd Schellenberg shown in a handout released by National Post. His case has been publicised by Chinese press lately

His case has been publicised by the Chinese press lately following the arrest of Meng Wanzhou, chief financial officer of tech giant Huawei on December 1 on U.S. charges related to trading with Iran.

Since then, China has arrested two Canadian citizens on charges of endangering national security in apparent retaliation. A Canadian teacher was detained but released.

Schellenberg’s death sentence was announced during a first public trial by the Dalian Intermediate People’s Court today, according to an online court statement.

‘The court completely rejects the accused person’s explanation and defence because it is completely at odds with the facts,’ the chief judge said in a courtroom packed with observers – among them Canadian embassy officials and three foreign reporters.

The Dalian court said Schellenberg, who was detained in December 2014, played a ‘key part’ in an international drug trafficking syndicate that planned to send some 222 kilogrammes (490 pounds) of methamphetamine to Australia, hidden in plastic pellets which were concealed in rubber tyres.

‘Not just content with spreading drugs in one country, the syndicate has spread across borders … it is a harm to human health and also to the stability of countries,’ the court said. 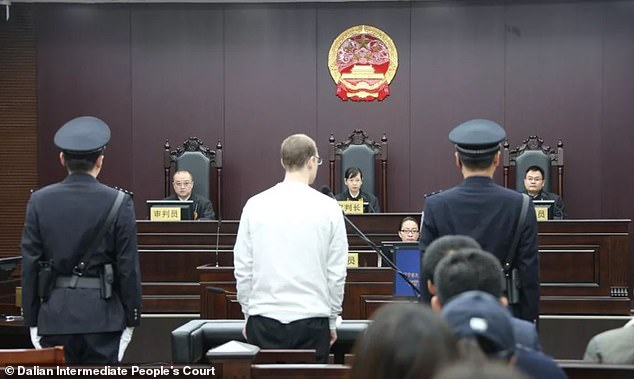 ‘I am not a drug smuggler. I came to China as a tourist,’ Schellenberg, said in his final statement before the sentence was announced. He was brought to the hearing in handcuffs 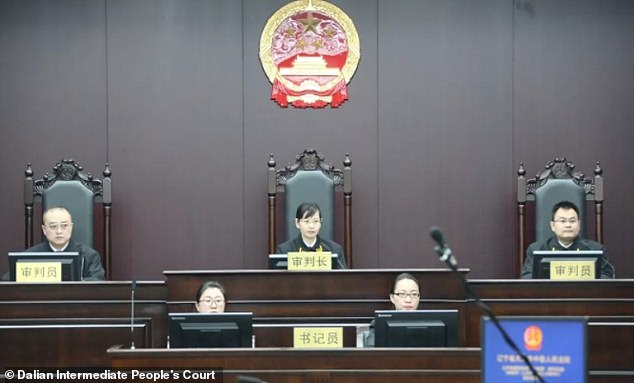 The Dalian court said Schellenberg, who was detained in December 2014, played a ‘key part’ in an international drug trafficking syndicate

All personal assets belonging to Schellenberg will be confiscated by the court, the statement said.

According to the court, Schellenberg was initially sentenced to 15 years in prison during a trial in November 20. The court also ruled to confiscate 150,000 yuan (£17,250, $22,170) from Schellenberg and to deport him. He appealed against the decision.

The Liaoning High People’s Court on December 29 ruled that the sentencing was too lenient and ordered the Dalian Intermediate People’s Court to re-try the case.

Ottawa has said it was following the case ‘very closely’ and has provided Schellenberg with consular assistance.

Beijing has repeatedly denied any diplomatic pressure in the case.

‘Global Affairs Canada has been following of this case for several years and has been providing consular assistance to the Canadian citizen since they were first detained in Liaoning, China,’ spokesman Richard Walker said.

China has executed other foreigners for drug-related crimes in the past, including a Japanese national in 2014 and a Filipina in 2013.

In 2009, China executed a Briton, Akmal Shaikh, on charges of smuggling heroin despite his supporters’ protest that he was mentally ill.

Experts said retrials are rare in China, especially ones calling for a harsher sentence. 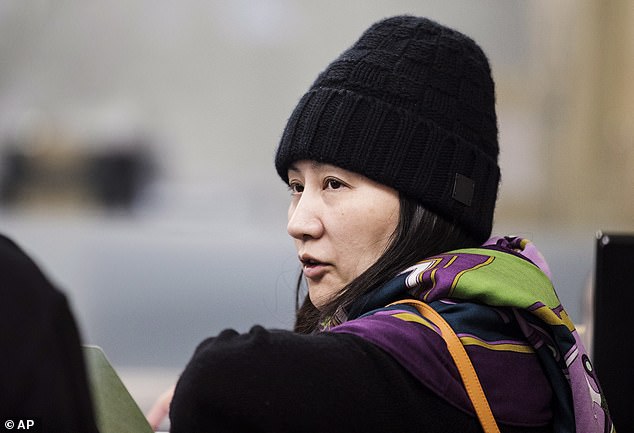 Schellenberg’s case is likely again to test relations between Beijing and Ottawa, which have been tense since Meng Wanzhou’s arrest.

Meng was detained in Vancouver on December 1 at the request of the U.S., which accuses Huawei of using a Hong Kong shell company to sell equipment to Iran in violation of U.S. sanctions.

Meng is the vice chairman of Huawei, the second-largest smartphone creator in the world.

After three days of hearings, she was released on bail of C$10million (US$7.4million) on December 11 – on the condition she surrender her two passports and agree to wear an ankle bracelet.

She have been staying in Vancouver and confining herself to one of her two Vancouver homes from 11pm to 6am as she awaits possible extradition to the U.S.

After the news of the Wanzhou’s release broke, a White House official told Reuters Trump did not know about a US request for her extradition from Canada.

Meanwhile Canadian Prime Minister Justin Trudeau said officers who arrested her Saturday as she was changing planes in Vancouver had acted on their own. 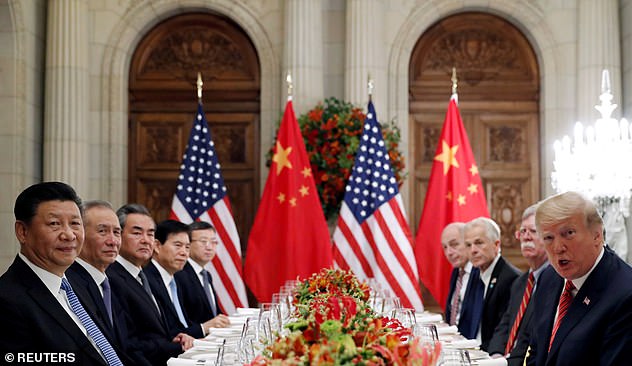 President Trump sits across from Chinese President Xi Jinping during a working dinner after the G20 leaders summit in Buenos Aires, Argentina, December 1. Last week, Chinese and US officials wrapped up three days of trade talks in Beijing aimed at resolving the tariff fight 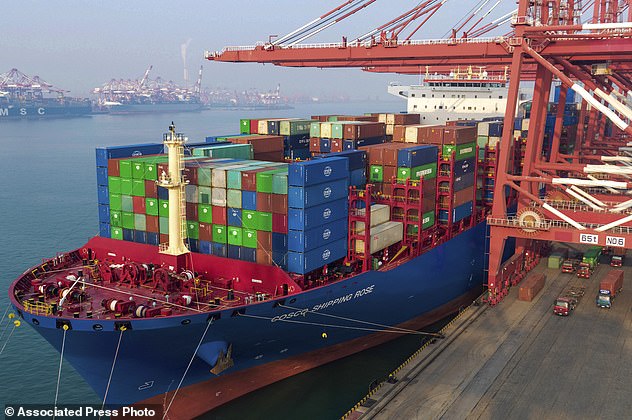 A cargo ship at a port in Qingdao in east China’s Shandong province. China’s trade growth slowed in 2018 as a tariff battle with Washington heated up

‘I can assure everyone that we are a country (with) an independent judiciary,’ Trudeau told a tech conference in Montreal. ‘And they took this decision without any political involvement or interference’.

Last week, Chinese and US officials wrapped up three days of trade talks in Beijing aimed at resolving a tariff fight that threatens to chill global growth.

The two sides will ‘maintain close contact,’ China’s Ministry of Commerce said Thursday, adding that the talks ‘enhanced mutual understanding and laid the foundation for addressing each other’s concerns.’

Officials from both countries discussed ‘ways to achieve fairness, reciprocity and balance in trade relations,’ the U.S. Trade Representative’s office said in a statement.

‘The talks also focused on China’s pledge to purchase a substantial amount of agricultural, energy, manufactured, and other products and services from the United States,’ the USTR said.

The meetings in China were the first face-to-face negotiations since U.S. President Donald Trump and Chinese President Xi Jinping met in Buenos Aires in December and agreed a 90-day truce in a trade war that has disrupted the flow of hundreds of billions of dollars of goods.