A Canadian women’s hockey player refused to wear her silver medal after her team lost to arch rivals USA in the Olympic finals.

Jocelyne Larocque yanked the medal off her neck during the ceremony in Pyeongchang just seconds after an official gave it to her.

The 29-year-old and her teammates lost the gold to the USA on Thursday in a dramatic shootout, ending a streak of four gold medals in the last four Olympic games.

Team USA celebrated gold medal joy and ended 20 years of Olympic misery against Canada in the most anticipated clash of the Winter Games last night.

They held their nerve and won the dramatic shootout after the game ended 2-2 in regulation time.

Dejected: Jocelyne Larocque (middle) immediately took off her silver medal after she was awarded it. Canada lost the gold to the USA in a nail-biting shootout on Thursday 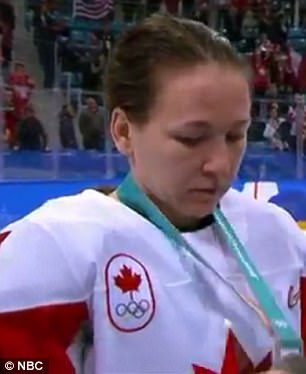 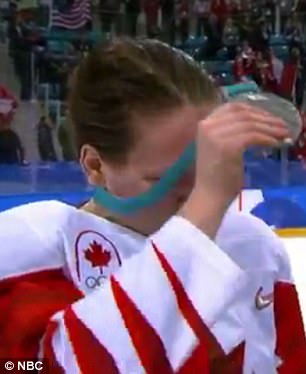 Unimpressed: Larocque only wore the silver medal for seconds before taking it off her neck 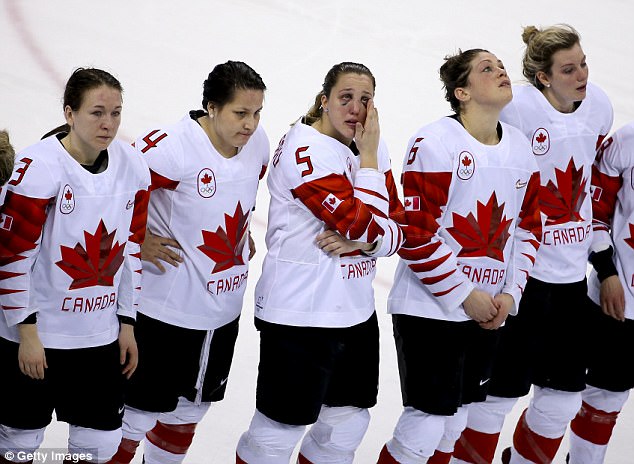 The Canadian team was crying on the ice after their heartbreaking loss to the USA. The women’s hockey team had dominated in the last four Olympics before ending their streak on Thursday night in a shootout 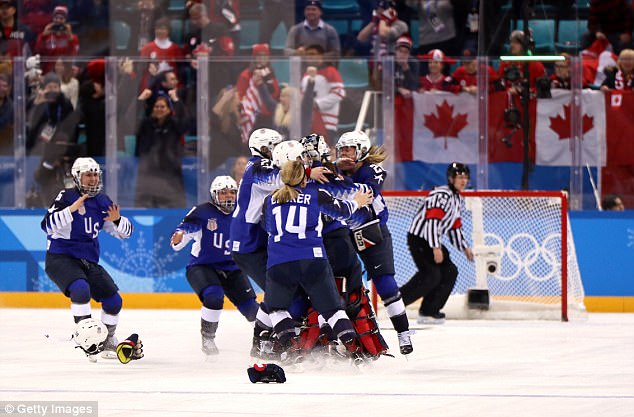 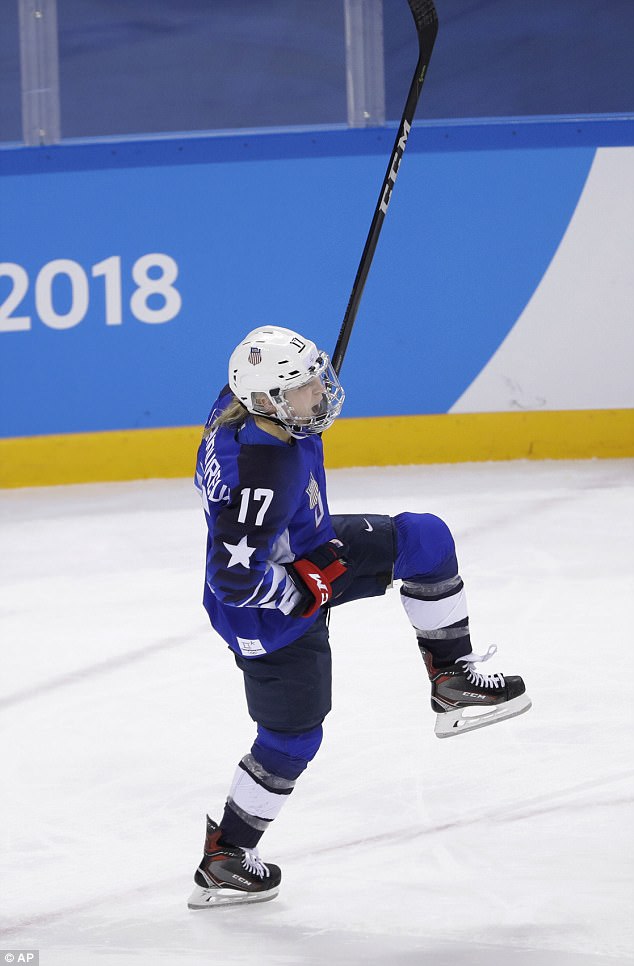 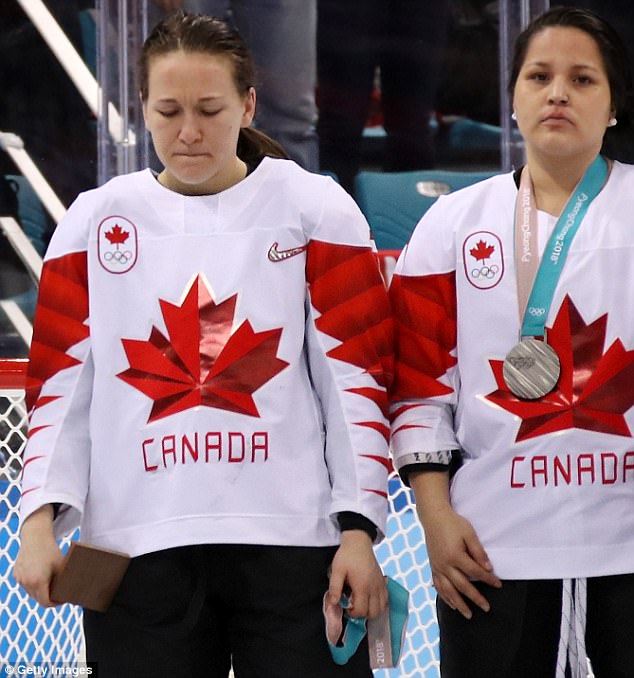 Larocque (left) is the only member of her team who refused to wear her medal. She reportedly was told to put the medal on by an official with the hockey’s governing body

For more than half an hour, Larocque refused to put on her medal for anyone who asked her to, including her teammates.

American fans could be heard shouting: ‘Put your medal on.’

‘It’s just hard,’ Larocque said in her post-game interview. ‘You work so hard. We wanted gold but didn’t get it.’

People on social media were calling her refusal to wear her medal ‘poor sportsmanship’.

Larocque finally wore the medal after her post-game interview when an official from the hockey’s governing body said she needed to wear it, according to The Globe and Mail.

Canada had won the last four Olympics before the US women ended their streak in a nail-biting game on Thursday.

Team USA were looking to end the 20 years of domination and took the lead through former Boston Pride star Hilary Knight just before the end of the first period.

But the team, watched by hundreds of fans screaming ‘USA USA’, could not contain the Olympic title holders who also had a large following. 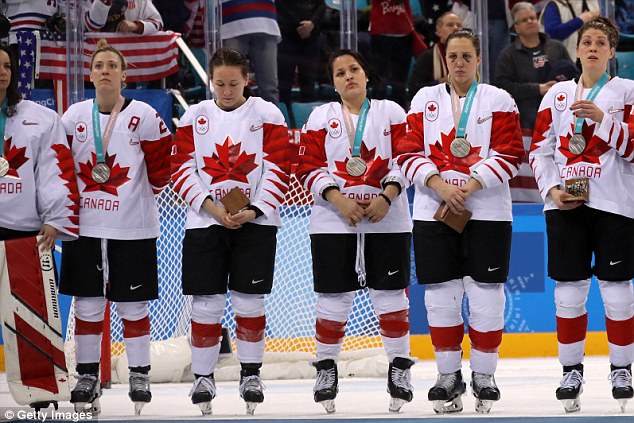 Head down: Laroqcue didn’t wear her medal for more than half an hour after the game until an official with the hockey team told her she needed to put it on 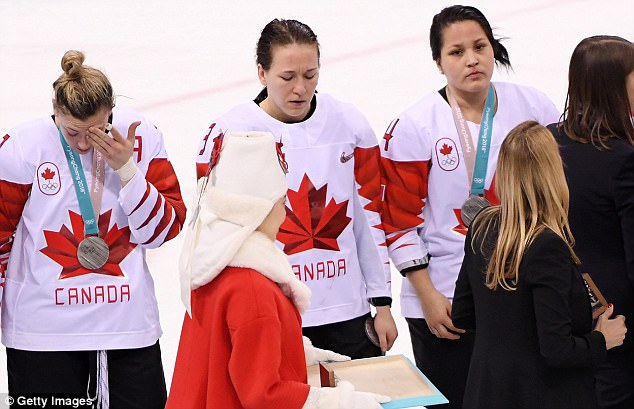 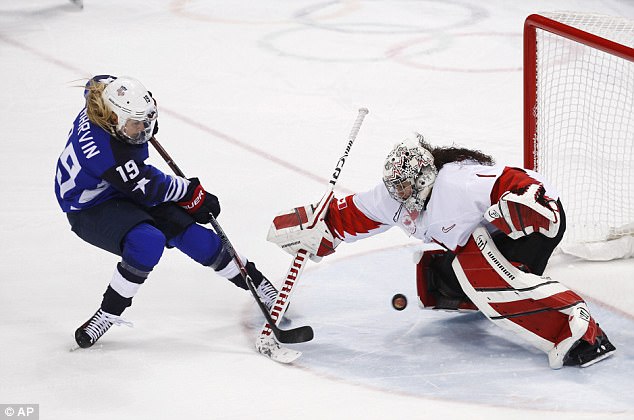 Gigi Marvin (19), of the United States, scores a goal against Shannon Szabados (1), of Canada, in the shootout 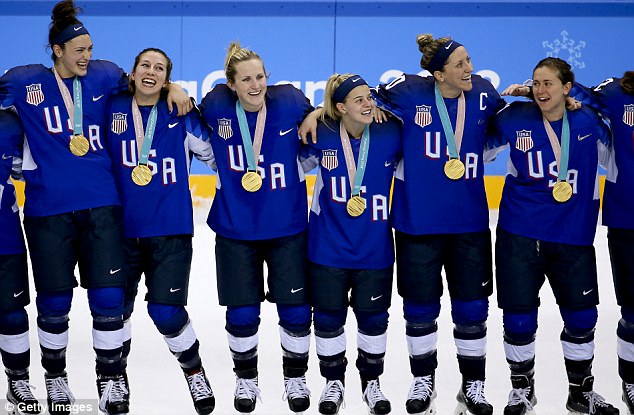 Elated: Players of Team USA celebrated their gold-medal victory over Canada on Thursday. The team defeated the reigning hockey organization in a shootout 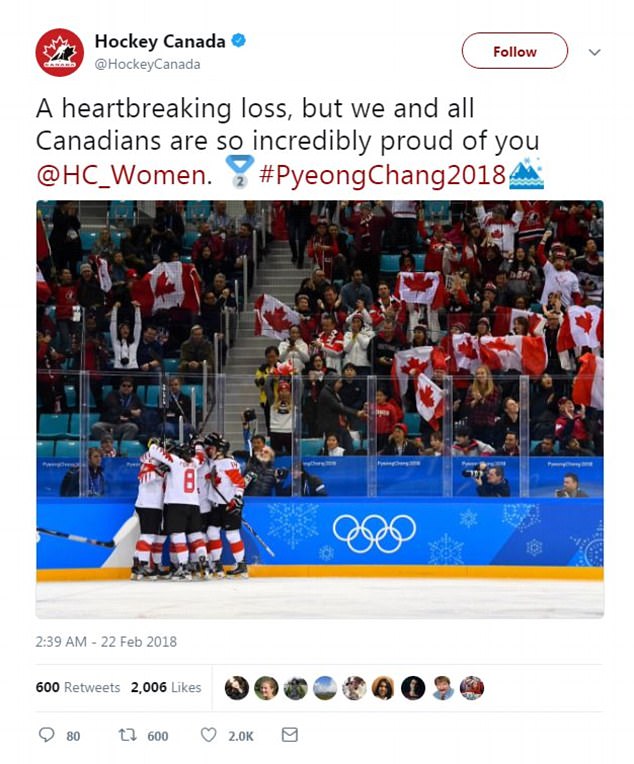 The official Twitter account for Canada’s hockey team said they were proud of how their athletes performed. But some people on Twitter criticized Larocque for her poor sportsmanship in refusing to wear hear silver medal

Goals from Haley Irwin and Marie-Philip Poulin in the second period looked to have sealed it for the Canadians and their fifth successive gold.

But a late US goal from Monique Lamoureux took the title match into sudden-death overtime at 2-2.

She netted the final to bring US gold at 3-2 in the shootout.

It was particularly glorious for captain Meghan Duggan who had settled for silver twice before.

Duggan, the captain, 30, was defeated against Canada in Vancouver and Sochi.

But last night she punched the air and held the Stars and Stripes in celebration as Bruce Springsteen’s ‘Born in the USA’ rang around the arena. 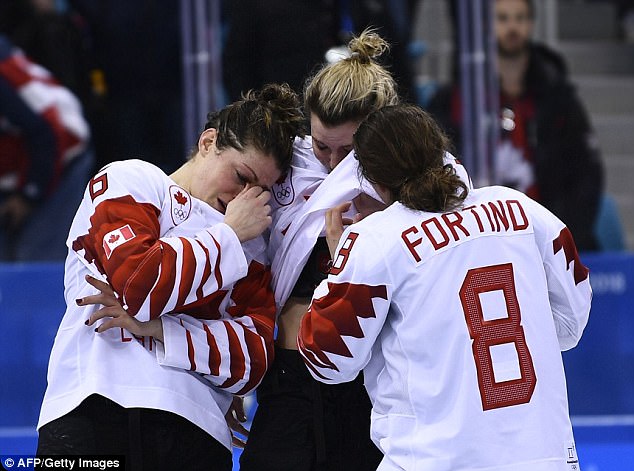 Heartbroken: Players from Team Canada consoled each other after their loss to the USA in the women’s ice hockey finals 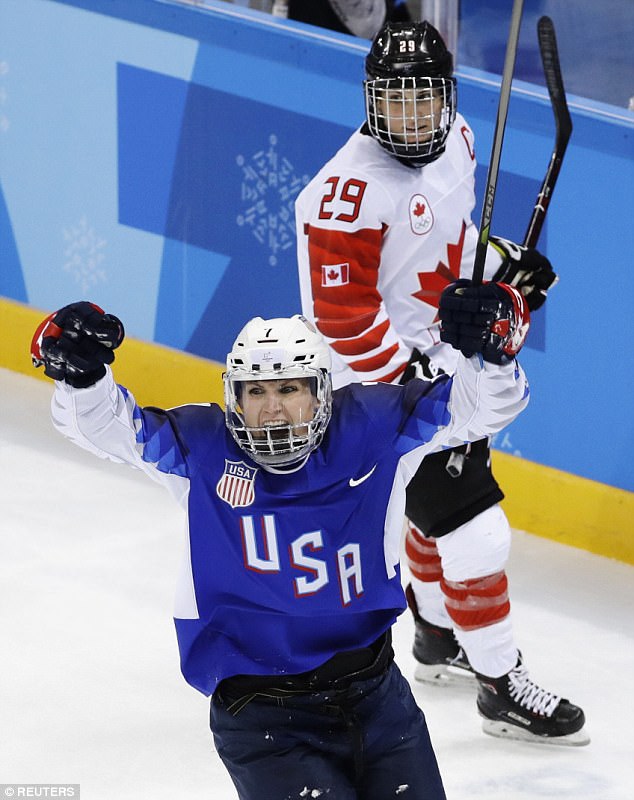 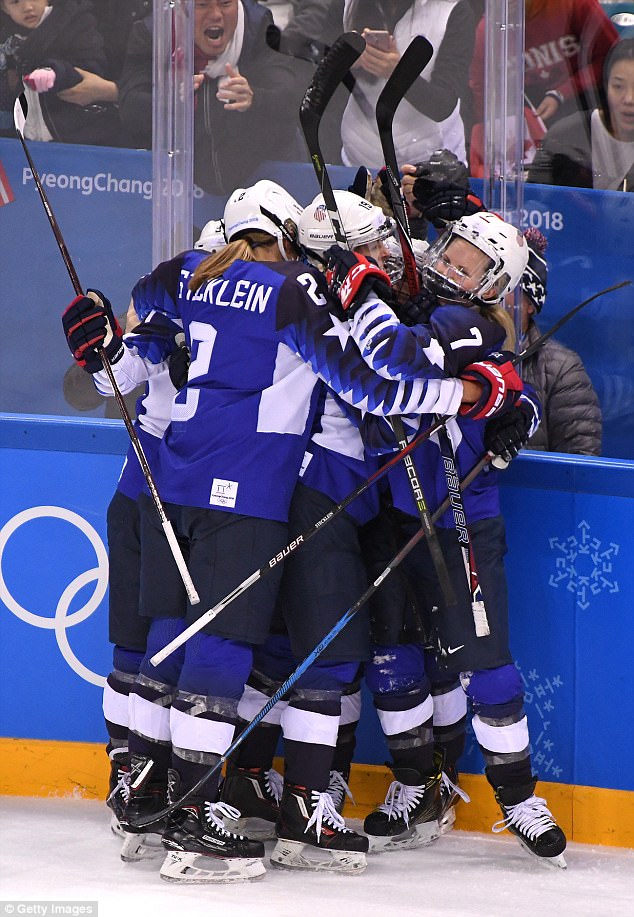 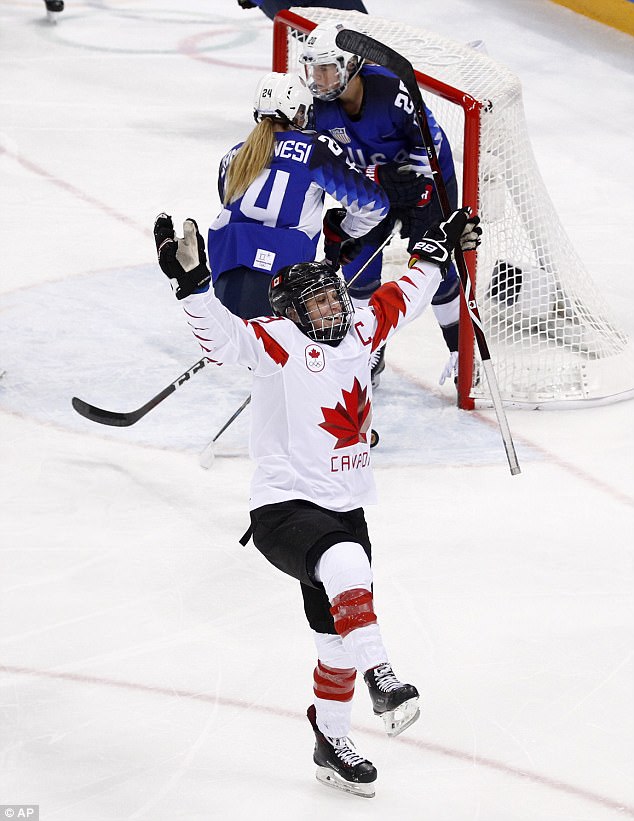 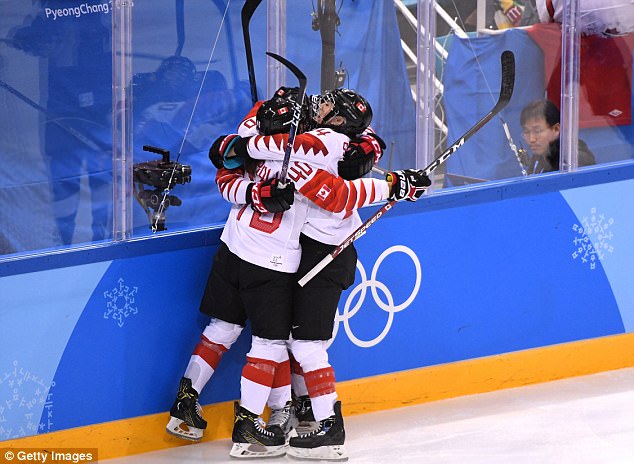 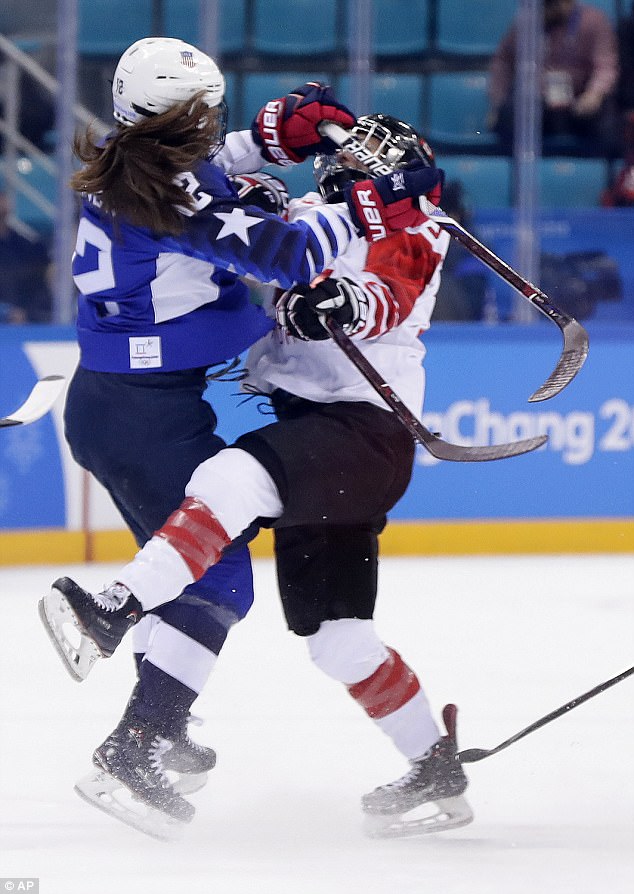 Kelly Pannek (left), of the United States, and Marie-Philip Poulin (right), of Canada, collide during the first period

Talking about how the gold medal had eluded her twice before, she said: ‘It is so sweet right now that I can’t think about anything but pride and excitement.

‘You come to the Olympics and you set out to win a gold medal.

‘But when you take a step back and think about who you are representing.

‘Everyone behind you back home; people that you don’t even know, veterans, Americans and they love that you are representing them.

‘There is so much pride in that and that is what it is about.

‘We are standing there on the world stage, representing our country and waving our flags high.

‘I am so proud to be an American. It was a great moment listening to the anthem.’

The two countries have been fighting for international supremacy since America last claimed gold in 1988. 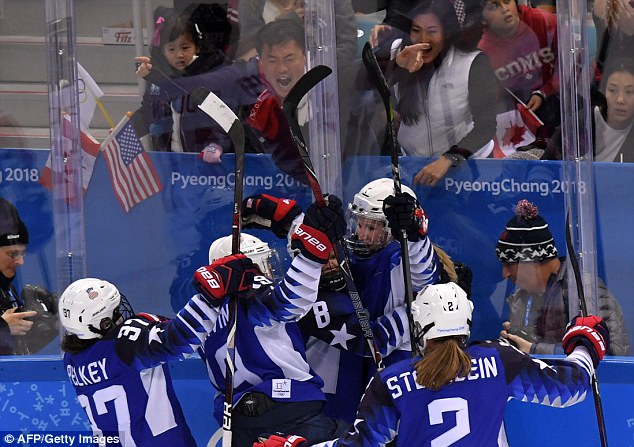 The US team celebrates scoring a goal, as a fan cheers them on, at the Gangneung Hockey Centre in South Korea 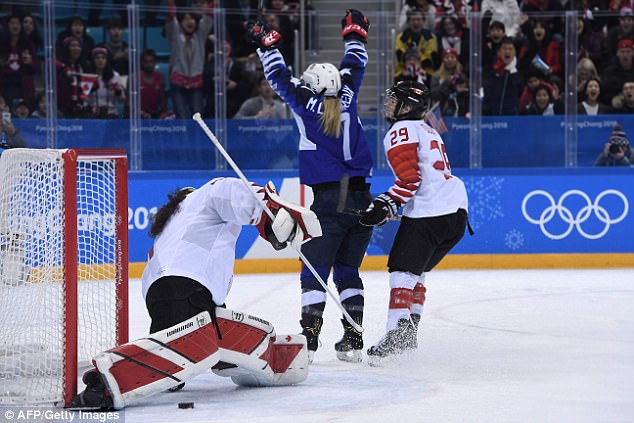 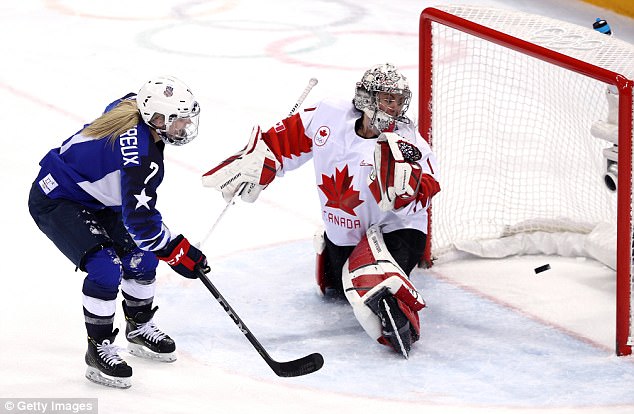 Lamoureux-Morando (left), #7 of the US, scores a goal against Szabados (right), #1 of Canada, in the third period

America has been the bookies’ favorites despite being beaten by the Canadians in a preliminary Pyeongchang match en route to the final.

America had dominated the overtime but almost lost the final when Meghan Keller was sent to the sidelines for a two minute punishment for an illegal hit with less than one minute and 35 seconds remaining.

With the US a player down, Canada stormed forward but the Americans held in for overtime… and golden glory.

Several of the Canadian players openly wept at their defeat as captain Marie-Philip Poulin walked among them consoling and hugging them.

Meanwhile, there were tears of joy from the US. 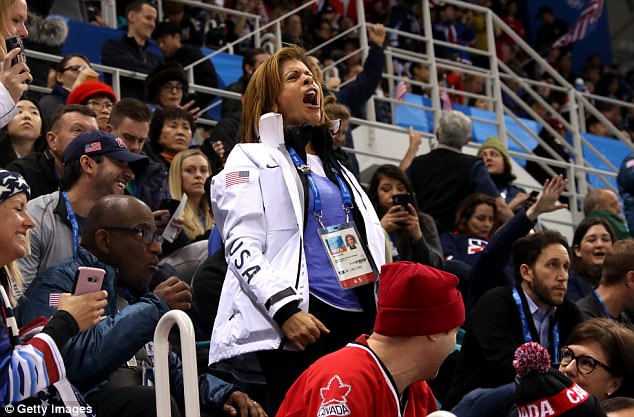 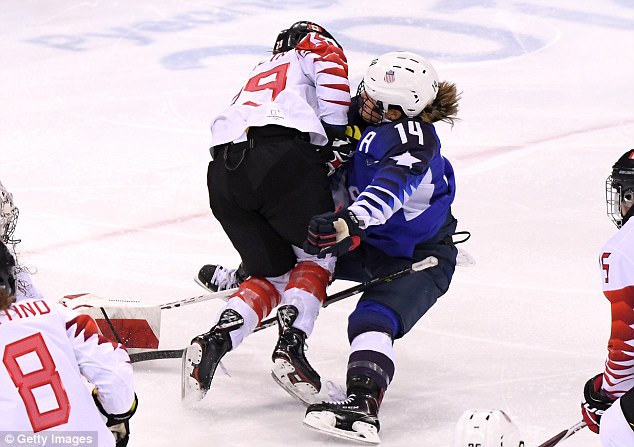 Marie-Philip Poulin (left), #29 of Canada, collides with Brianna Decker (right), #14 of the United States, in the third period 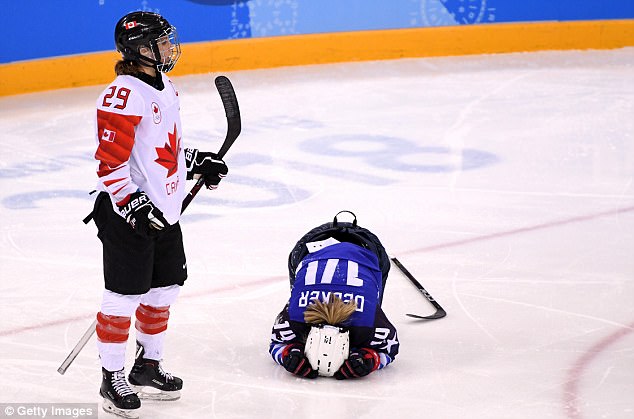 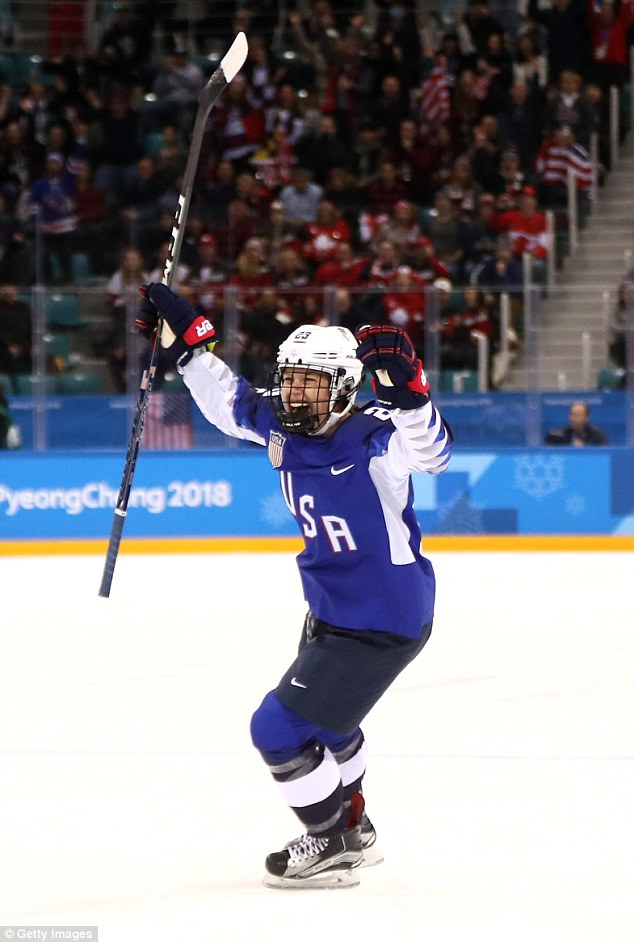 Sidney Morin, #23 of the United States, celebrates after a first period goal by Hilary Knight, #21 (not pictured), against Canada