In seven weeks’ time, the much-awaited Avengers: Endgame arrives in cinemas, and it is an open secret that Captain Marvel, one of the few female superheroes in the so-called Marvel Cinematic Universe, features prominently.

So time had definitely been running out if the clever folk at the now Disney-owned Marvel wanted to get her origins story out first.

But here it is, just in the nick of, and very good it is too. Yes, it’s a complicated tale, particularly for the first half hour, when normal conventions, such as starting at the beginning, are ambitiously abandoned. 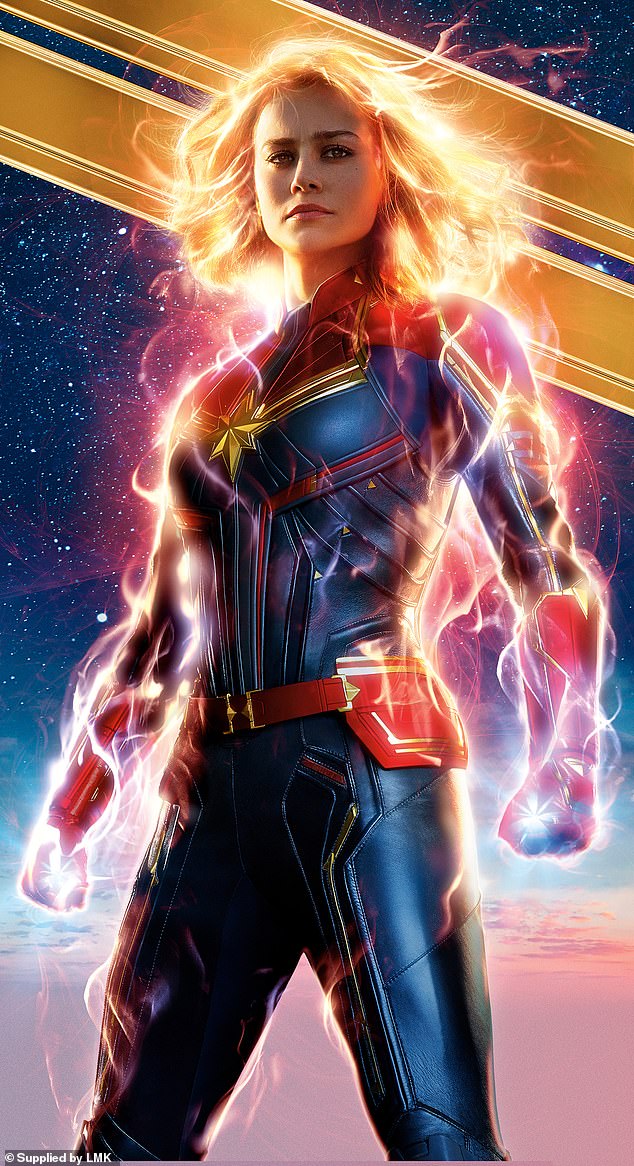 Brie Larson as Captain Marvel whom we first meet on the home planet of the Krees, where she’s already in possession, if not yet control, of her basic superpowers

But it’s also cool, clever and delivers a very funny explanation of how Nick Fury – the oft-returning Shield agent played by Samuel L Jackson – lost his eye. I guarantee it’s not what you’re expecting.

First and foremost, however, Captain Marvel is very much a superhero film for our more inclusive and enlightened times. Not only does it feature a female Marvel superhero in her own film (an honour not yet afforded Scarlett Johansson’s Black Widow), but it’s co-written and co-directed by a woman, Anna Boden (working alongside her long-time film-making partner, Ryan Fleck) and adapted from the comic series written by the famously feminist Kelly Sue DeConnick.

But there’s more. Carol Danvers, the US Air Force pilot destined to become Captain Marvel, may be feisty and just a little bit flirty, but she definitely hasn’t been oversexualised. 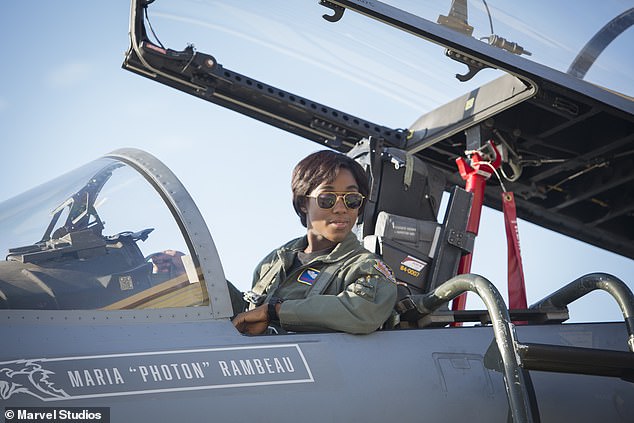 There are two strong female supporting roles, one of them is Lashana Lynch as Larson’s best friend and fellow pilot, Maria Rambeau (above). Cynics may see this as a box-ticking exercise

And there are two strong female supporting roles. Annette Bening plays both a walking, talking computer known as the Supreme Intelligence and the inventor of the light speed engine, and Lashana Lynch plays Carol’s best friend and fellow pilot, Maria Rambeau.

Cynics may see this as a box-ticking exercise – kick-ass female lead: tick; older woman: tick; black woman: tick – but it blows through the male-dominated superhero universe like a refreshing blast of fresh creative air.

Brie Larson, the Oscar-winning star of Room, takes on the title role, whom we first meet on the home planet of the Krees, where she’s already in possession, if not yet control, of her basic superpowers. 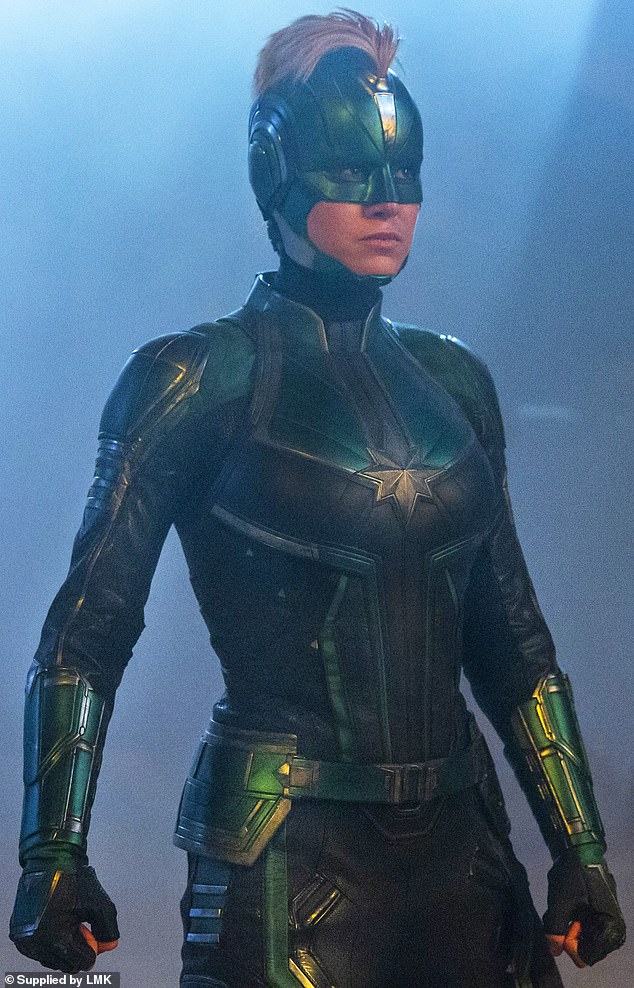 Captain Marvell (known as Vers) can fire photon-blasts out of her fists and boil a kettle just by touching it with her hand. Any minute now she will be ready to join Starforce

Such as firing photon-blasts out of her fists and boiling a kettle just by touching it with her hand. Helping her hone her fighting skills is Yon-Rogg, head of the Krees’ crack Starforce security team, played here by Jude Law apparently channelling Marlon Brando’s Jor-El in Superman.

Any minute now, Vers – as she is currently known – will be ready to join Starforce and do battle with the Krees’ arch enemy, the shape-shifting Skrulls. Krees? Skrulls? Vers?

Confused? Me too. So let’s just say her first run-in with the Skrulls doesn’t go to plan and very soon she finds herself on Earth – in a Blockbuster video store to be precise – where it’s 1995 and someone has been tampering with her memory. 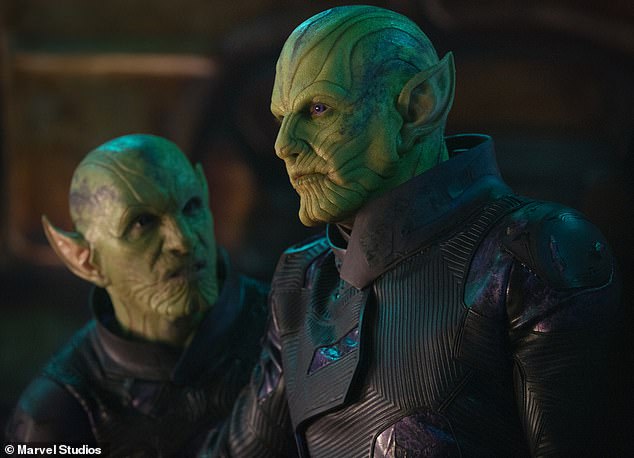 But there is one bit of good news. She’s about to meet Nick Fury, who for reasons of Avengers continuity is now played by a digitally ‘de-aged’ Jackson. Given that he’s lost 25 years overnight and gained an eye in the process, it’s an alarming sight.

But at least now we’re up and running. As the Skrulls come after them, Vers and Fury wrestle very amusingly with late 20th-century technology (it’s all dial-up connections, AltaVista search engines and CD-ROMs that take an eternity to load) but Vers can’t shake off the feeling that she’s been to Earth before.

See what I mean about not starting at the beginning?

Brie Larson trained so hard to get into superhero shape that by the end she could push a two-ton Jeep truck for 60 seconds.

The likeable Larson and the digitally rejuvenated Jackson soon establish a winning screen friendship and what follows is spectacular and fun, marred only by a clumsy late twist on the goodie-baddie front, and by Captain Marvel’s growing resemblance to DC Comics’ Superman, a comparison that has dogged the Marvel character since she was a he back in the Forties.

But those reservations apart, this is very much a case of mission accomplished. Captain Marvel is back in the superhero game.

What happens next? We’ll find out in just seven weeks.

The Kindergarten Teacher (12A)

Maggie Gyllenhaal does not do conventional, so from the moment we lay eyes on Lisa Spinelli we’re pretty sure she is no ordinary New York kindergarten teacher, despite the peasant blouses and flowery skirts.

And we’re right; Lisa is soon convinced that one of her pupils, five-year-old Jimmy, is a genius poet way beyond his years.

But when she starts passing off Jimmy’s work as her own at her weekly class run by handsome Gael García Bernal, we’re just at the beginning of a story that gets more disturbing the longer it goes on.

Sara Colangelo writes and directs with understated style, while Gyllenhaal is her normal fearless self as a woman in the grip of a potentially life-changing obsession.

A large extended Spanish family reunites for a wedding at a small village near Madrid. But in the middle of the festivities, the teenage daughter of the beautiful Laura (Penélope Cruz) goes missing.

Who has taken her? Professional kidnappers, or perhaps someone closer to home? 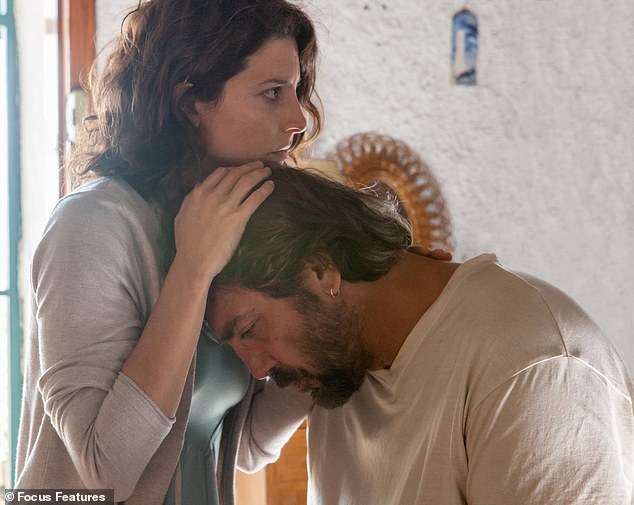 The teenage daughter of the beautiful Laura (Penélope Cruz) goes missing. Javier Bardem (above with Barbara Lennie), is splendidly convincing as Laura’s ex

Tracy Edwards I knew about, but King Hussein of Jordan? Who knew he played such a pivotal role in Edwards’ tireless efforts to put together the first all-female crew to contest the Whitbread Round The World Race in 1989?

At first I thought Alex Holmes’ documentary might as well be on telly, but the wonderful last hour is brilliantly effective and unexpectedly moving.