A man with ‘wide staring eyes’ who wandered into an Asda store moments after slashing the throat of a man outside and said ‘I have just killed somebody’ has been jailed for almost 11 years.

Colin Clarkson, 51, badly wounded a 19-year-old man outside the supermarket in Grimsby in the ‘random’ assault which had no motive.

He then walked into the store, took a packet of raspberries from a shelf, calmly sat down cross-legged on the floor and started eating them.

Clarkson, of Grimsby, took the knife he had used out of his back pocket and put it on the conveyor belt of a till.

Colin Clarkson, 51, pictured, slashed the throat of a young salesman outside an Asda and was described as having ‘wide, staring eyes’ by witnesses 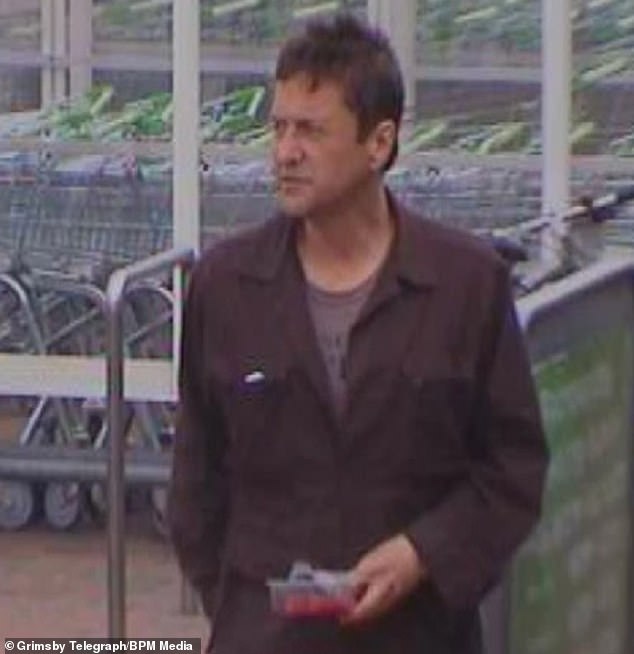 Clarkson slashed the teenager’s throat outside the Grimsby shop before calmly walking inside and eating a packet of raspberries, pictured 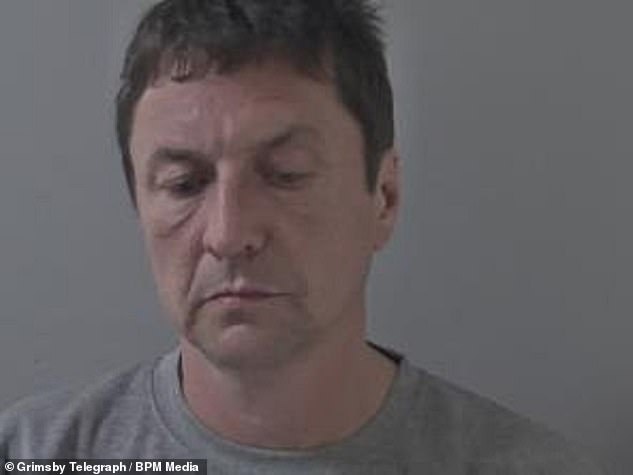 The 51-year-old, pictured, admitted attempted murder and was jailed for almost 11 years

He was jailed for 10 years and eight months after admitting attempted murder.

Judge Paul Watson QC told him: ‘You are a real danger. It must have been an absolutely terrifying ordeal.’

The 19-year-old victim – a salesman working with a colleague for First Utility, needed 26 stitches following the incident on July 18.

Jeremy Evans, prosecuting, told Hull Crown Court that it was a ‘random attack’.

At about 5.30pm, Clarkson spoke briefly to the salesman and asked him: ‘Is this tough going?’

The man told him that he enjoyed his work and had received plenty of interest.

Clarkson then reached into his back pocket, pulled out a kitchen knife with a five-inch serrated blade, grabbed him around the neck and slashed his throat.

The two salesmen fled into the supermarket and raised the alarm.

The court heard Clarkson put the knife in his back pocket and walked to the fresh produce area where he sat down cross-legged, reached for some fruit and calmly ate it.

He had ‘wide, staring eyes’ and said: ‘I have just killed somebody.’ 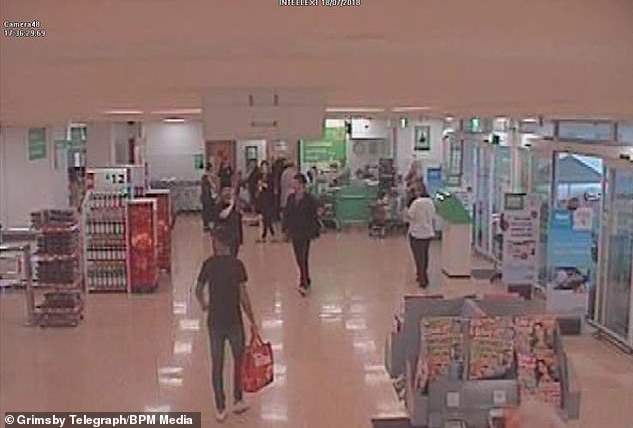 CCTV captured Clarkson walking through the shop, pictured, moments after the attack 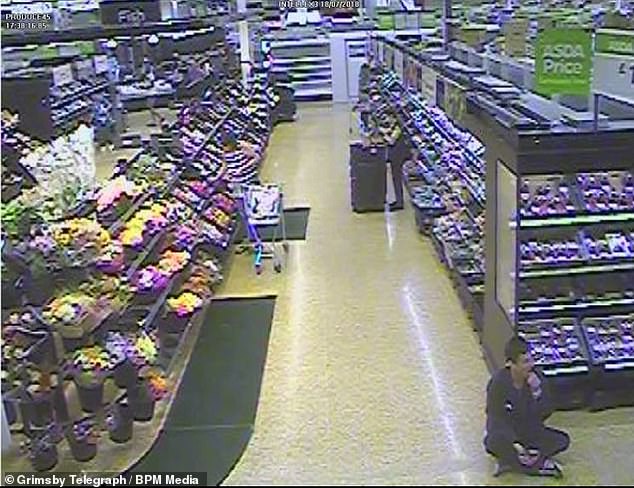 After picking up the raspberries, he sat on the floor and ate them, pictured, and put the knife on a till conveyor belt

The store manager persuaded him to go inside a holding area for shoplifters, where he carried on eating the raspberries.

Clarkson claimed he could not remember having a knife with him or why he had it.

He had previously been involved in a public order disturbance while last year he bit a policewoman on her wrist.

He had worked most of his life until a motorcycle accident in 2016.

Mr Lowe said Clarkson was described as decent, loving, caring and a churchgoer by friends who put others before himself and acted out of character.

He said: ‘He clearly deeply regrets his actions and the consequences. He would do anything to go back in time and change what he has done’.

Mr Lowe added Clarkson had said: ‘I am truly, deeply sorry for what I have done.’

Judge Paul Watson QC said: ‘It was an utterly horrific, random and indiscriminate attack on a young man who was causing you no offence whatsoever.

‘Your intention was to kill someone. After the attack, you left him bleeding. You yourself believed you had killed him.

‘You showed no remorse whatsoever. You felt no pity for the man you thought you had murdered.’ 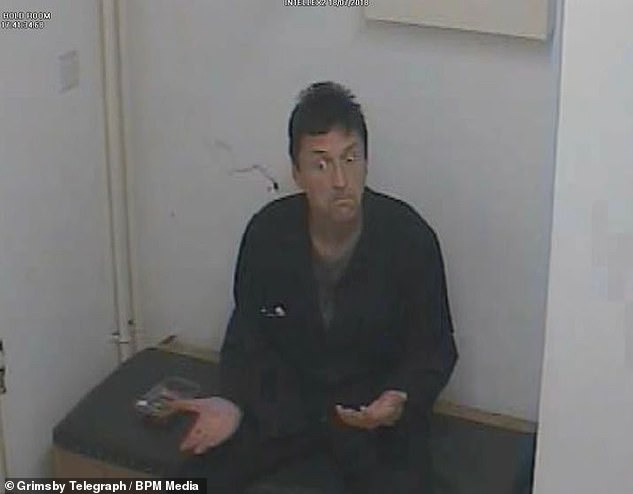 Clarkson was eventually persuaded to wait for police in a holding area, pictured, used to keep shoplifters in 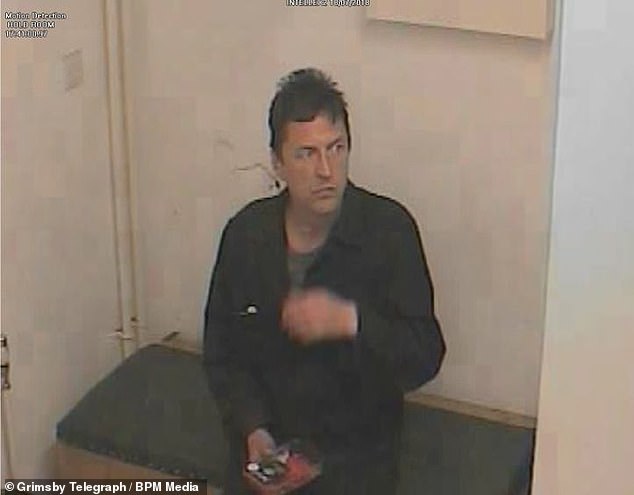 A judge said Clarkson, pictured, was a ‘danger’ and that he subjected the young salesman to an ‘absolutely terrifying ordeal’

He said Clarkson behaved in a ‘bizarre and baffling’ way in what was an ‘horrendous attack’.

Clarkson was told he would spend five years on an extended licence following his release from prison.

He showed no emotion as he was led out of the secure dock.

Following the hearing, Mr Evans said: ‘This was a brutal, random and completely unprovoked attack on the victim in broad daylight outside a busy supermarket.

‘Approaching him from behind, Clarkson suddenly slashed the victim’s throat several times with a knife, leaving a number of gaping wounds, the largest of which was 10cm long. The wounds missed the carotid artery by only 5mm.

‘It is clear that it is only by great good fortune that this crime was not still more serious. The victim was very lucky to escape with his life.

‘Clarkson will now be serving a considerable length of time in prison, and I hope this is of some comfort to his victim.’