Police in hazmat suits yesterday surrounded the body of a man who was found dead on the pavement at ground zero of China’s virus epidemic.

The grey-haired man collapsed and died while wearing a face mask on a street in Wuhan, a city of 11million people which is under quarantine amid the coronavirus crisis.

It is feared that the virus caused the man’s death, and the reaction of police and medical staff in forensic suits highlighted the fear pervading the city.

The death toll in China today rose to 213 after the World Health Organisation declared a global emergency and the US told its citizens to avoid China. 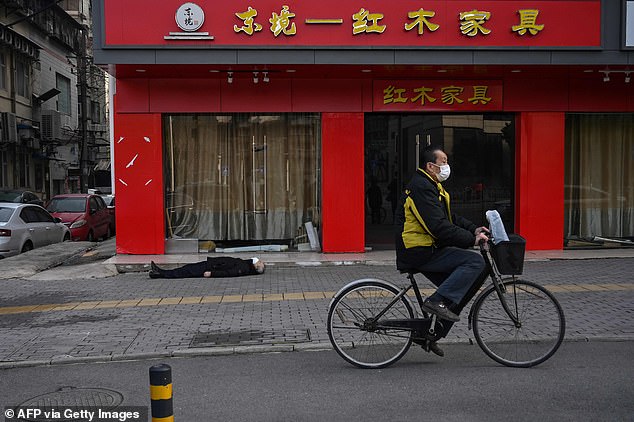 A man wearing a face mask cycles past the body of a man who collapsed and died on a pavement in Wuhan, a city of 11million people which is under quarantine 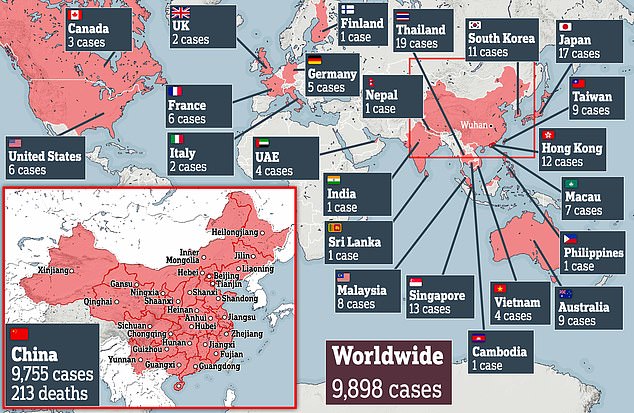 The virus, which emerged late last year, has infected thousands in China with at least 159 deaths in Wuhan alone.

Authorities have imposed an unprecedented lockdown of Wuhan, blocking off roads out of the city and banning flights, in a bid to stop the virus spreading.

Yesterday police and medical staff in hazmat suits attended to the man’s body outside a furniture store in the city.

Medical staff in blue overalls gently shrouded his body with a blue blanket before police stacked supermarket cardboard boxes to hide the scene.

The body was eventually zipped into a yellow surgical bag and carried into a van on a stretcher before staff began to disinfect the streets.

A team of forensic experts who examined him were also sprayed with disinfectant by colleagues after removing their hazardous material suits.

A woman standing near the man, wearing pink pyjamas and a Mao cap, said she believed he had died from an illness caused by the virus. 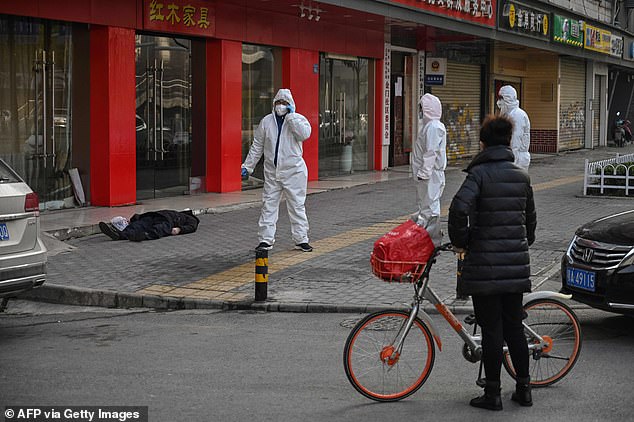 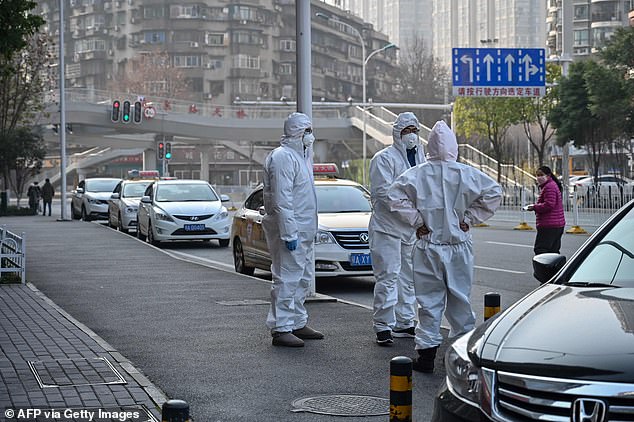 ‘It’s terrible,’ she said. ‘These days many people have died.’

Police and local health officials did not provide details on his case.

A few worried locals passed by on bicycles on what would normally be a crowded street.

The dead man on the street lay one block from the Wuhan Number Six Hospital, one of the main medical centres for treating those with virus symptoms.

Those who are trapped in Wuhan are enduring a tormenting wait for the lockdown to end, for a cure to be found, or even just for check-ups at overwhelmed hospitals.

One man smoking near the scene was told sharply by police to put out his cigarette and don a face mask. He quickly followed their orders.

Reporters in Wuhan have seen long queues at hospitals, with some patients saying they had queued for two days to see a doctor.

Many brought their own chairs for the wait.

With most traffic banned, people who venture outside have to walk or bike everywhere in the huge city. 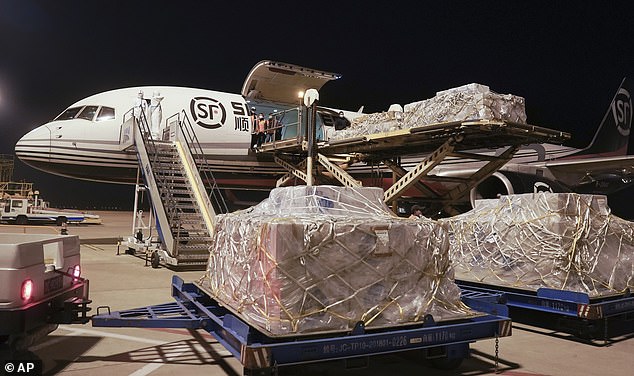 The US State Department yesterday raised it warning alert to the highest level, telling Americans ‘do not travel’ to China and urged those already there to leave.

The American warning goes further than the advice issued by by Britain, Germany, Japan and other countries to avoid non-essential travel.

The WHO, which was criticised for initially downplaying the virus threat, changed tack after crisis talks in Geneva and declared an emergency yesterday.

‘Our greatest concern is the potential for the virus to spread to countries with weaker health systems,’ said WHO chief Tedros Adhanom Ghebreyesus.

‘We must all act together now to limit further spread… We can only stop it together.’

Many major airlines have suspended or reduced flights to China, while Mongolia and Russia have shut their borders.

Italy and Israel on Thursday barred all flight connections with China.