This is the harrowing moment a cruel Chinese mother viciously beat her son for losing a tablet at school and had it deliberately filmed.

The mother sent the video to a closed group among parents and teachers in a bid to retrieve the tablet. However, she was being criticised by web users for child abuse.

Local police were alerted and detained the mother for investigation. The boy was sent to a hospital to treat his wounds. 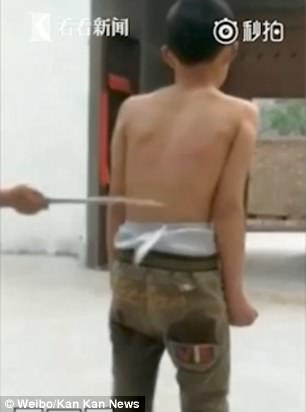 A 12-year-old boy is badly beaten by his mother because he lost his tablet at school in China (left). The boy cries and says he does not know but his mother continues (right)

According to KanKan News, the mother, surnamed Xu, found out her young boy lost his tablet at Jiaxiang Primary School in Fengqiu county, Henan Province on April 24.

She asked her five-year-old daughter to film the brutal punishment as she beat her son with a wooden stick.

The 12-year-old boy can be heard screaming in pain as his mother repeatedly whips on his back with his shirt off.

His back is covered with red and purple marks.

‘Where did you put it?’ the mother yelled as she beat her son.

The mother then posted the clip to a closed messaging group in WeChat, where people shared and alerted local police. 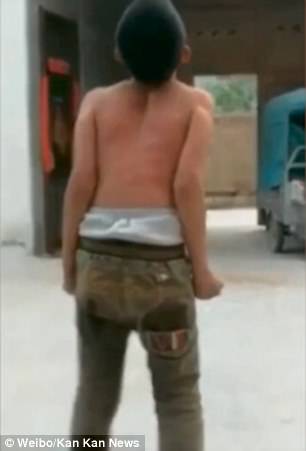 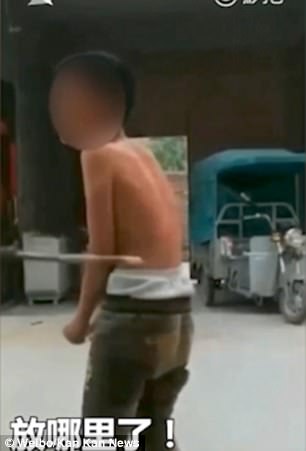 The mother deliberately filmed the beating and posted on a group chat in an attempt to retrieve the tablet (left). The boy was taken to hospital to treat his wounds later (right)

In a statement, the mother expressed her regret and apology for her behaviour.

Policemen gave a verbal warning to the mother and will further discuss with her husband when he is back from work from another city.

The boy is currently receiving treatment at a hospital.