A corporate whizz kid with a five figure salary, who shopped in Harrods and quaffed fine wines in the capital’s swankiest bars, has revealed how she found happiness after swapping London’s boardrooms for a paddleboard.

Burned out and disillusioned by the rat race, former project director Sian Sykes, 40, from Newborough, Anglesey, quit – moving back in with her parents in Anglesey, North Wales, and replacing designer gear with a wet suit as she trained to be an outdoor instructor.

Her epiphany came while she was visiting her parents, Dennis and Jane Sykes, when she was 32 and realised she was dreading returning to work.

‘I had always been outdoorsy,’ she explained. ‘My mum took me wild camping when I was three weeks old.

‘When I came back to London after a weekend in Wales, I started to really pine for the outdoors. I really missed the sea and the mountains, and the stillness.’

Sian Sykes, 40, from Newborough, Anglesey, swapped her five figure salary as a project manager for a paddleboard. Pictured, in her corporate days 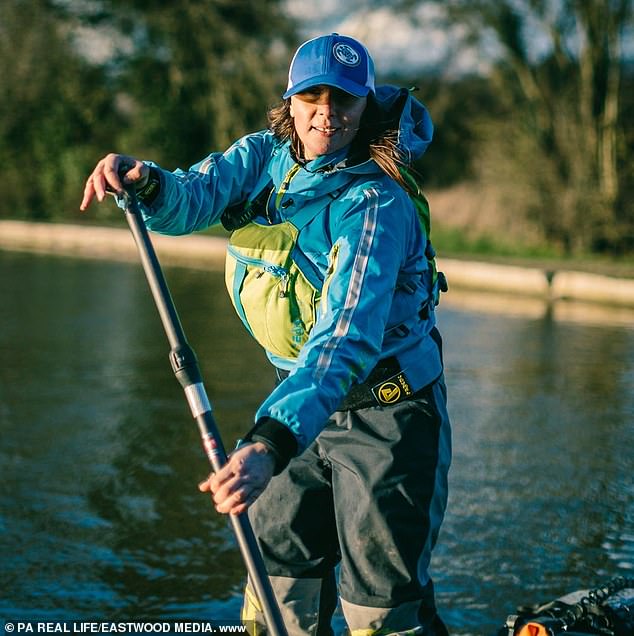 The adventurer’s epiphany came while she was visiting her parents, Dennis and Jane Sykes, when she was 32 and realised she was dreading returning to work. Pictured paddleboarding across Wales 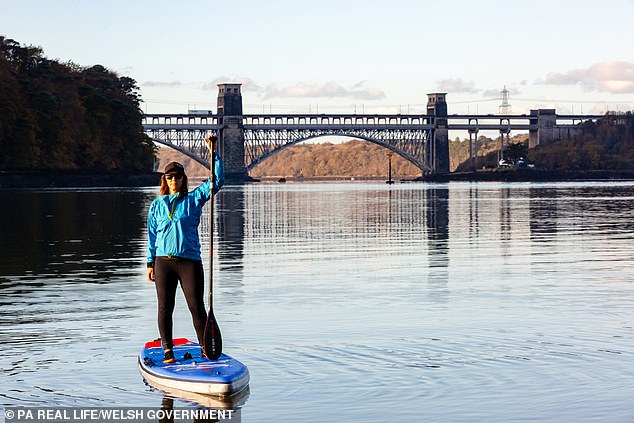 The 40-year-old dubbed her career move ‘the best thing I have ever done.’ Pictured, Sian paddleboarding across Wales

She continued: ‘I started to fear the circus of London, waking up on a Monday and everybody rushing round at a million miles per hour.

‘A turning point was when I was asked to work on accounts for companies that I had boycotted when I was younger, for environmental reasons, and I decided enough was enough.’

Having researched how to become an outdoors instructor, Sian, who is single, took what she originally planned to be a six-month sabbatical, qualifying as a climbing and walking instructor, leading expeditions in places like Peru in South America. 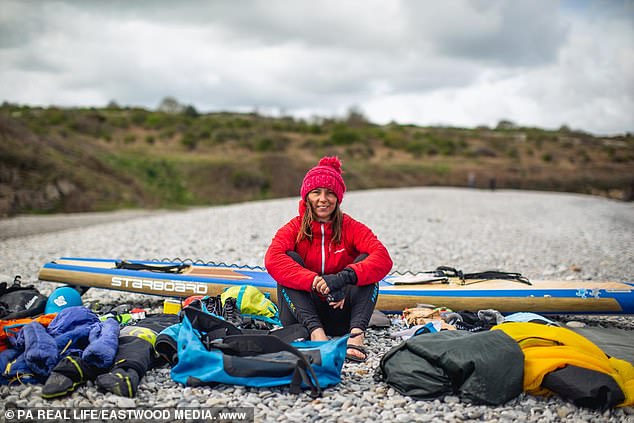 When Sian returned from her travels, she decided to make the move, leaving London and moving back in with her parents. Pictured, with her paddleboarding gear 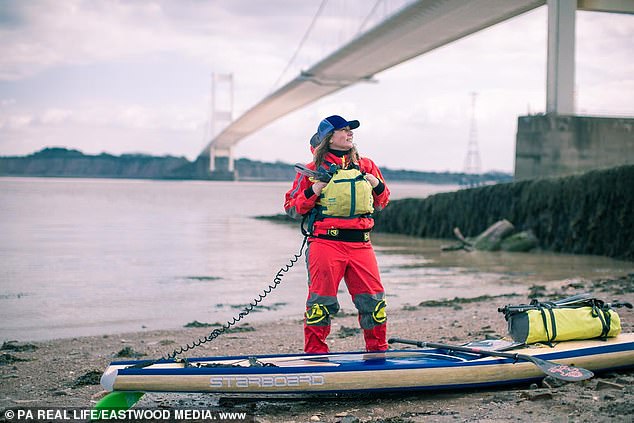 Six years ago, Sian was invited by friends to cross England on a paddleboard. While she loved the water, she’d always felt intimidated in a kayak due to a bad experience – so it seemed perfect. Pictured, paddleboarding around Wales

‘I loved it,’ she said. ‘My parents saw that the outdoors made me shine and sparkle. For my mum, especially, it was nice to see me reconnect with nature. It was totally humbling.

She continued: ‘I had thought buying things and money should have brought happiness, but then I realised it comes from deep within. It’s about experiences and finding the true essence of who you are.

‘I was spending time with dolphins, porpoises and sea otters. It was blissful.’

On returning from her travels, Sian took the plunge, leaving London and moving back in with her parents.

‘I found the transition really hard,’ she admitted. ‘I’d gone from having a lot of money to being poorer than a student and I didn’t know how to make a living, particularly as the work was so seasonal.

‘It was a real period of change but, thankfully, I had enough savings to buy myself a house.’

Her new life could not be more different to her previous existence. After Sian left Staffordshire University with a first class degree in creative media, she won awards for her work, which took her to places like Vienna and Las Vegas.

Then, after first working as an account handler for major brands in Manchester, she reached the height of her profession in London.

‘It was 100mph and the pressure was high, but I thrived on it,’ she said. ‘During the week I would be working 16 to 18 hour days, meeting clients, having team meetings, liaising with the sales team.

‘I lived and breathed creative media. Every day was different. I loved working on a project and the tight deadlines. 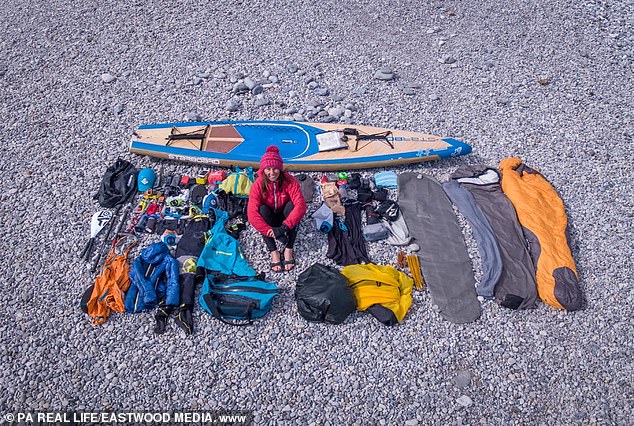 Eventually, the high life started to lose its gloss for an exhausted Sian, who longed for a more spiritual existence. Pictured, with her paddleboarding gear 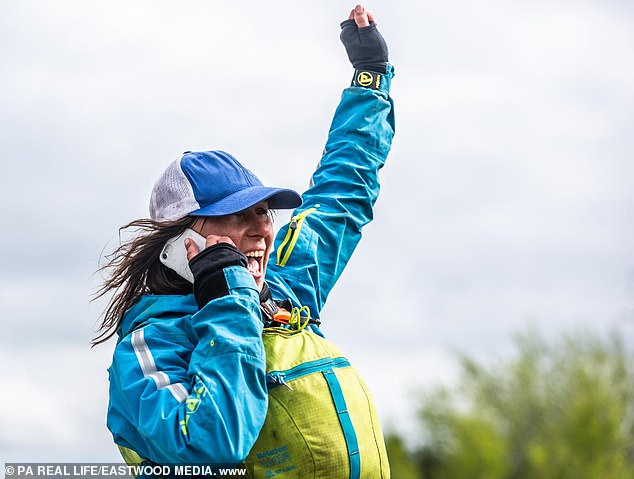 Sian never could have imagined how her life would turn out, but said she’s ‘incredibly happy now.’ Pictured, paddleboarding across Wales

She continued: ‘I had the mentality of a workaholic and I was trying to be the best I could be.’

‘I become a project director, overseeing project managers and felt very privileged. I was earning five figures and I loved the money and the lifestyle.’

‘There were designer shops opposite the office. I’d be shopping in Harrods, going out for expensive dinners every night. We worked hard in the day then at night we would go out drinking.’

But the high life started to lose its gloss for Sian, who, exhausted by the pace, longed for a simple, more spiritual existence.

But Sian, who worked hard in Anglesey, also gaining an international mountain leader qualification, found her true vocation six years ago, after being invited by friends to cross England on a paddleboard.

‘I loved being on the water but had always felt intimidated in a kayak, because of a fear I would not be able to roll back up having had a bad experience as a child,’ she said.

‘But with a paddleboard the worst that can happen is you fall in the water. On this trip, we camped in forests that smelled of wild garlic, we saw deer and kingfishers. It was amazing. 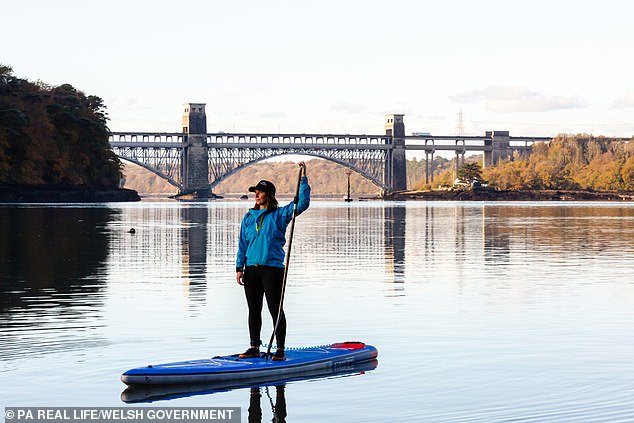 In spring 2018, Sian paddleboarded around the whole of Wales – making her the first person ever to do this (pictured) 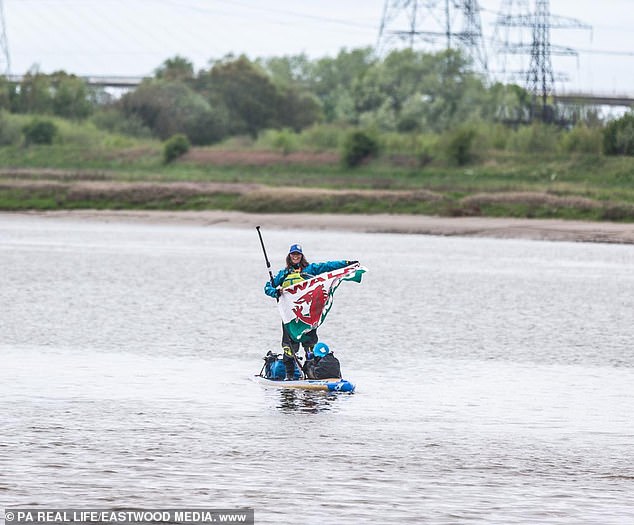 The former project managed managed to paddleboard 1,000km in 60 days. She said: ‘sometimes paddling 13 hours a day and in one day I did 70km.’ Pictured, paddleboarding across Wales

‘After that, I focused on paddleboarding, and am now an SUP expeditions guide, which is the highest qualification you can get, and an oceans ambassador for Starboard – the premium windsurfing and paddleboarding brand.’

Sian is also an avid campaigner against single-use plastics, after seeing the devastation they caused to beaches in Wales.

‘I started to organise beach cleans and was shocked by the amount of rubbish being washed up, the amount of cotton wool buds and bottle tops,’ she said.

‘I became a regional representative for Surfers Against Sewage and one of my roles was to take the lead for Plastic Free Community Status, working really hard to try and get it for Anglesey, which it did this year.’

To help raise awareness, Sian took part in a stand up paddleboard around Anglesey five years ago to raise money for Surfers Against Sewage and the North Wales Wildlife Trust.

Wanting to do even more, in spring 2018 she then decided to paddleboard around the whole of Wales – making her the first person ever to do this.

‘In London, I had had no idea what impact me buying single-use plastic bottles had on the beaches in Wales, so I wanted to use the trip to educate people,’ she explained. ‘

‘I started and finished in Connah’s Quay, paddleboarding up the Welsh coast, along the canals and through the Severn Estuary solo and unsupported.’

‘There were a few risky moments. There was fast flowing water and tidal races, paddling across shipping channels, avoiding eight firing ranges and tackling a 45km open crossing.

‘The Severn Estuary is the second highest tidal range in the world which means when you paddle you have to constantly look at your timings because if it drains you are left on sandbanks. 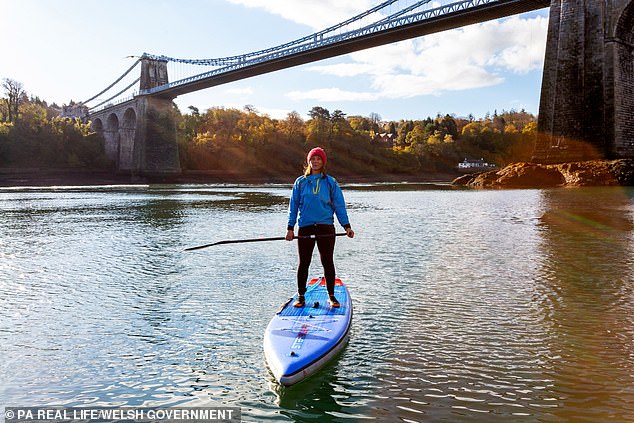 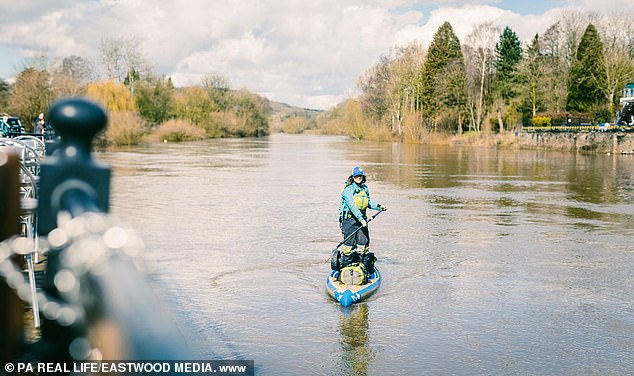 Speaking of the rewarding elements of paddleboarding, Sian (pictured) told how she’s taken people recovering from chemotherapy or suffering with depression.’ I get hugs from people who tell me it has changed their life,’ she said

‘I was camping and picking up litter as I went along and speaking to people about the campaign.

‘It was 1,000km and I managed to do it in 60 days, sometimes paddling 13 hours a day and in one day I did 70km. It was amazing. I was overwhelmed by the kindness of strangers. They would show up with a cup of tea or vegan chocolate brownies.

‘My whole thing now is expeditions with a purpose. I do this to educate people about single use plastic.

‘I get such a kick when I meet people that, at first, are a bit worried about getting on the water. Then you see them sparkle and that is when I feel really fulfilled.

‘I’ve taken people recovering from chemotherapy or suffering with depression. I get hugs from people who tell me it has changed their life. It is so much more rewarding than what I was doing before.

‘My parents Dennis, 79, a retired site contract manager and Jane, 71, a retired schoolteacher inspired me. 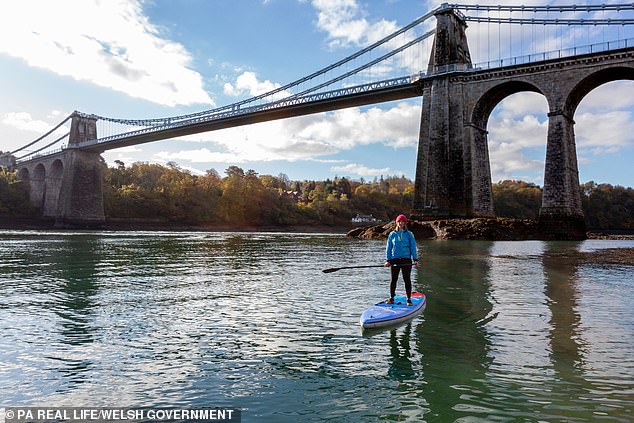 The adventurer has praised her mum for igniting her passion for nature and activism. ‘She is my greatest hero and helped me make the change,’ Sian (pictured) explained 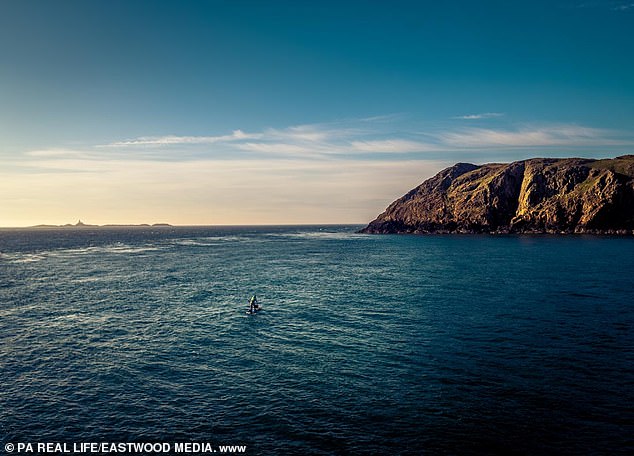 Sian is also an avid campaigner against single-use plastics, after seeing the devastation they caused to beaches in Wales. Pictured, paddleboarding across Wales

My mum especially ignited my passion for nature and activism. She is my greatest hero and helped me make the change.

‘When I was living in London I never thought that would be my life, but I’m incredibly happy now,’ she said. ‘It is the best thing I have ever done.’

‘I still work long hours, but it is doing something I love and I’m in charge of my own destiny.

‘My office changes on a daily basis, one minute I’m looking up at Snowdonia and another I’m looking out across the sea in Anglesey.’

Sian is currently taking part in the Welsh Government’s Trade and Invest Wales campaign, showing how Wales supports workers’ quality of life and celebrates businesses that do this well.

The Welsh Government’s Business Wales service attracts a high proportion of women, with 46 per cent of enquiries for business start-up support being from women and the proportion of female owned business currently standing at 28 per cent. 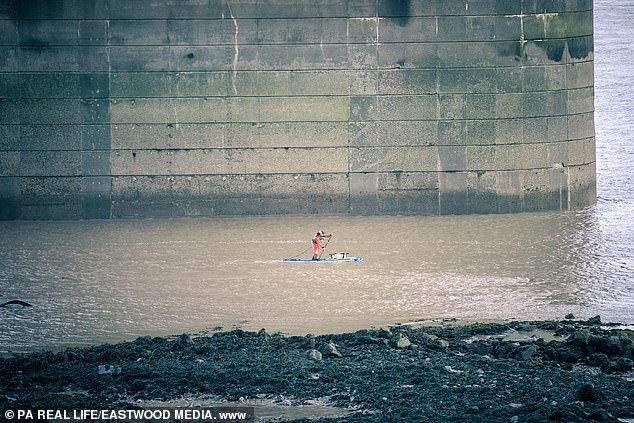 Sian told how she loved the face her office changes on a daily basis. She said ‘One minute I’m looking at Snowdonia another I’m looking out across the sea in Anglesey.’ Pictured, paddleboarding across Wales