Cleveland Browns finally rule Myles Garrett OUT of clash against Atlanta after the defensive end was earlier listed as questionable, despite flipping his Porsche in a single-car crash this week

Cleveland Browns star defensive end Myles Garrett will miss Sunday’s game at Atlanta after being in a single-car crash this week.

Garrett was listed as questionable by the Browns before he was eventually downgraded to out on Saturday.

The former Texas A&M star crashed his Porsche on Monday and has not practiced since. Although Garrett did say Friday that he was willing to play his part if necessary.

‘If it were up to me, I’d love to go,’ he told reporters, Friday. ‘That’s just my competitive spirit and my nature.

‘Physically, we have to assess that, going up to the game…That’s a decision we’ll make a little closer to game time.’

He was allegedly driving 65 mph on a road with a 45mph speed limit as he crashed his car Monday trying to avoid hitting an animal and suffered non-life threatening injuries.

Garrett revealed he has a renewed perspective following the scary crash which left him with a sprained left shoulder and strained right bicep.

‘Definitely grateful to be here,’ he said. ‘With what I saw right after. … The pictures. It was a helluva event.’

‘Emotionally, I’m pretty grounded with it. I think I’ve put it behind me,’ he said. ‘Physically, I’m still dealing with the injuries that came along with it. 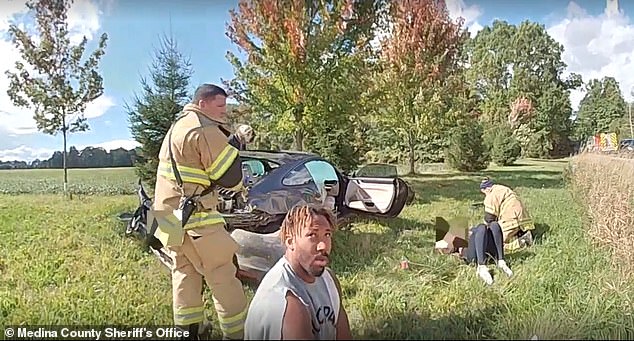 Cleveland may also be without fellow pass-rusher Jadeveon Clowney who is currently listed as questionable thanks to an ankle complaint.

Garrett was deemed to be traveling at an ‘unsafe speed for the type of roadway,’ according to an Ohio State Highway Patrol statement to ESPN, and reportedly swerved to avoid an animal on the road.

He has been issued a citation for ‘failure to control his motor vehicle’ in response to the single-car accident.

The crash happened on a rural road near his home in Berea, Ohio, and he suffered a sprained shoulder, strained biceps, cuts and bruises in the wreck. 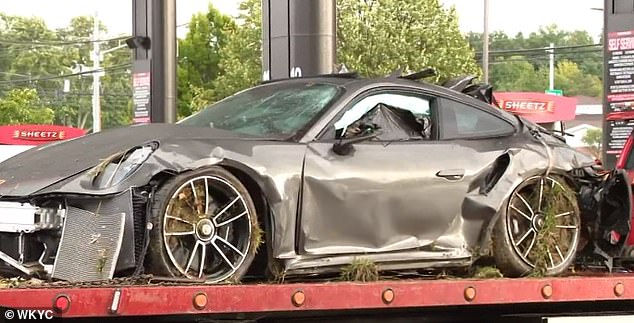 Sheriff’s bodycam footage showed him looking dazed while being treated by medical personnel and sitting on the ground near his overturned vehicle.

Neither alcohol nor drugs played a factor in the crash, according to police, and both he and the female passenger in the car were wearing seatbelts.

The defensive end was released from the hospital Monday night and cleared concussion protocol according to the team.