Coles is hiring 14,000 extra staff to cope with selling a week’s worth of food in a day

Coles is selling a week’s worth of toilet paper, pasta, hand sanitiser, and rice every day – but can’t get canned tuna off its shelves.

Stores are stripped bare in minutes by unceasing panic buying as Australians are forced to work from home and stay indoors by coronavirus lockdowns.

Toilet paper was infamously the first to disappear, thanks to viral social media posts, and is still selling 20 million rolls a week, but now the plundering is across the board.

The supermarket giant now faces its hardest test with customers set to stampede into its shops over Easter – the second biggest weekend of the year.

Coles is pulling out all the stops to deal with unprecedented demand, including hiring 14,000 extra staff and redesigning its supply chain.

Coles is selling a week’s worth of toilet paper, pasta, hand sanitiser, and rice every day 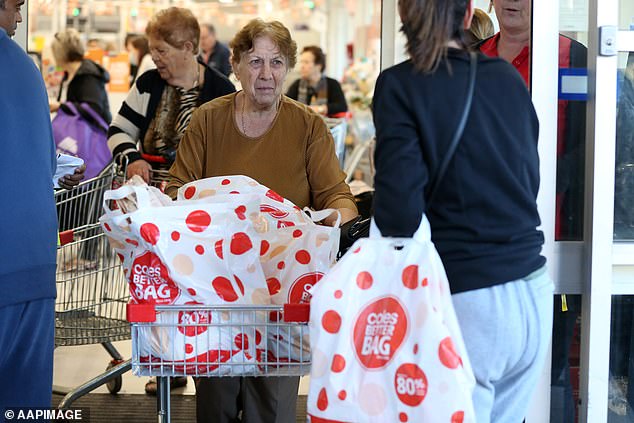 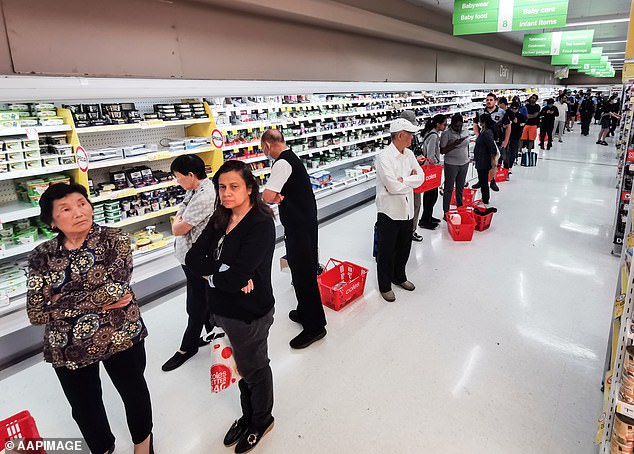 People queuing for a delivery of toilet paper, paper towel and pasta at Coles in Epping in Sydney – items that the supermarket has struggled to keep on shelves

Chief operations officer Matthew Swindells said all the products customers have found hard to find were selling at a rate of a week’s worth of stock per day.

‘It’s not small movement away from the usual demand, it’s very much extreme and continual,’ he told Daily Mail Australia.

‘You can see customers are now doing more home cooking as they are working from home or have lost their jobs, but then they get sick of it,’ he said.

‘There’s a burst of fresh produce where people are cooking from scratch and eating healthy, and then it will shift into confectionery and sugary drinks, and back again.’ 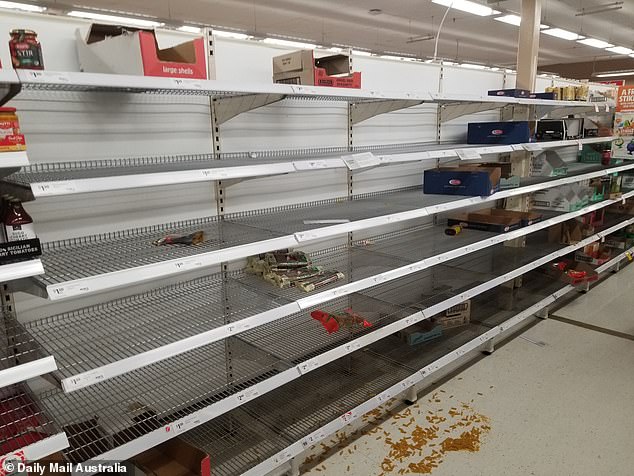 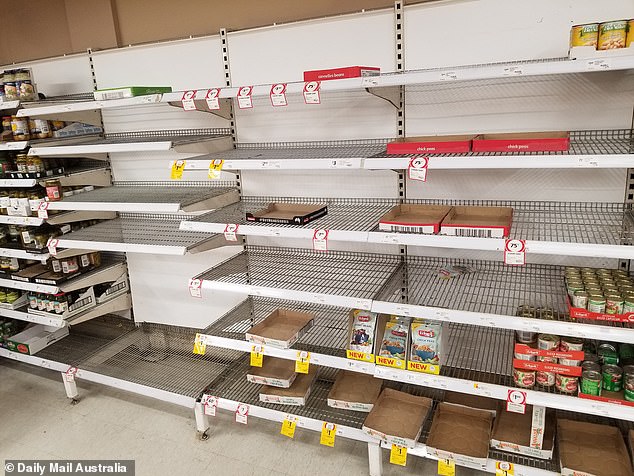 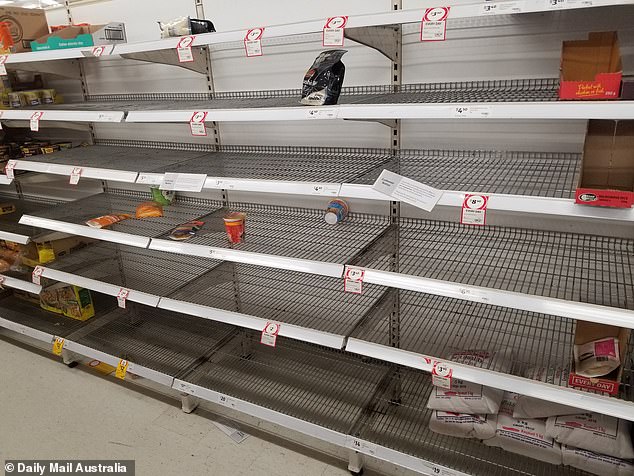 If you wanted rice from the Coles in Surry Hills you were limited to a few sacks of jasmine rice, the rest was all gone

But despite canned tuna being the one meat that will keep for a long time without being frozen, no one is buying it.

Mr Swindells admitted he can’t work out why the overlooked product is piling up on shelves even when heavily discounted.

‘Tinned fish is always very popular this time of year because of Easter and it’s held up really well, but tinned tomatoes have really struggled,’ he said.

‘Maybe we should remind people that it’s Lent.’

Easter egg sales have finally started to take off this week after it was much slower than previous years for the past month.

‘It’s like the country has suddenly decided we’re doing Easter,’ he said.

The vast majority of Australians working from home, or becoming unemployed, is also showing up on the sales sheet. 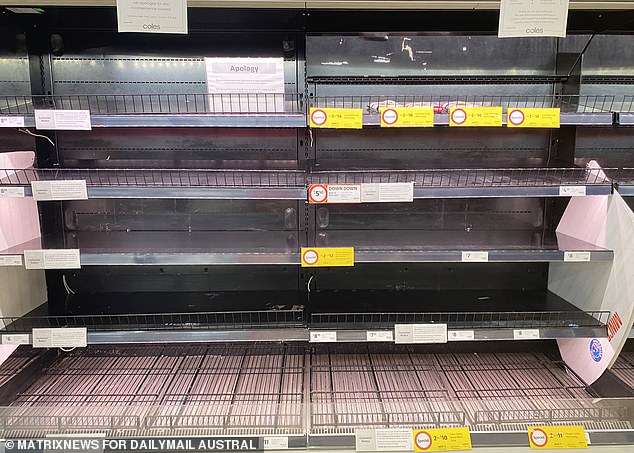 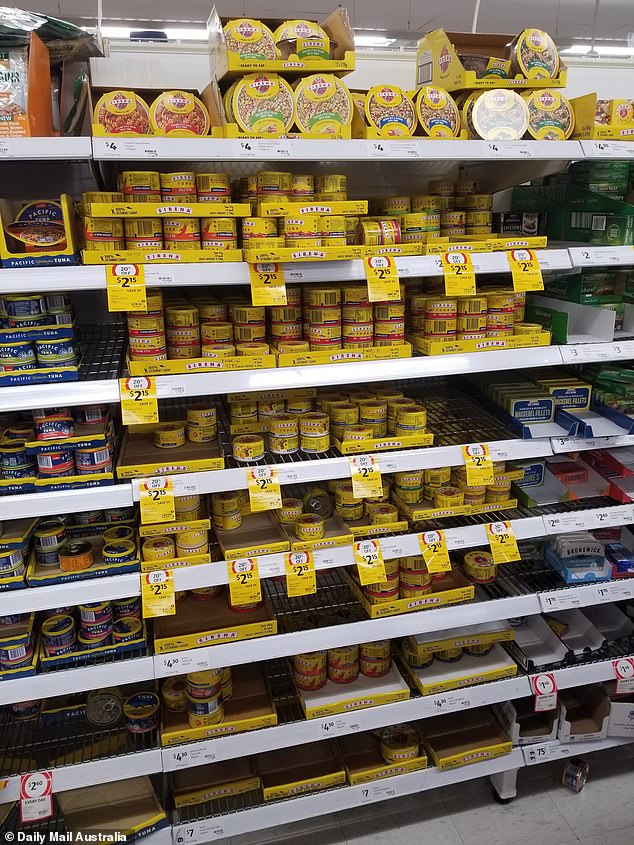 But despite canned tuna being the one meat that will keep for a long time without being frozen, no one is buying it 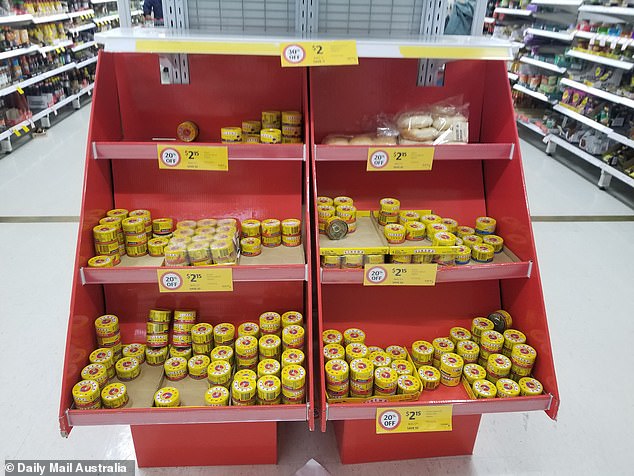 On-the-go items like ready meals and confectionery initially dived as offices emptied, but are making a comeback as workers grow weary of indoor life.

‘As people stay home they are snacking more so confectionery has caught up, and ready meals have recovered this week,’ Mr Swindells said.

When and how Australians shop has also radically changed by government orders to stay home unless absolutely necessary.

Instead of sales and customers peaking on weekends, it is now flat from day to day – and much higher than even the biggest Sunday shops.

‘We are getting fewer customers through the doors because people are shopping less frequently, but their basket size is much bigger,’ Mr Swindells said.

‘There are more people shopping in the morning so if you were a savvy shopper you’d come in the afternoon.

‘We used to get the after 3pm school run and the after work run, but they’ve fallen away.’ 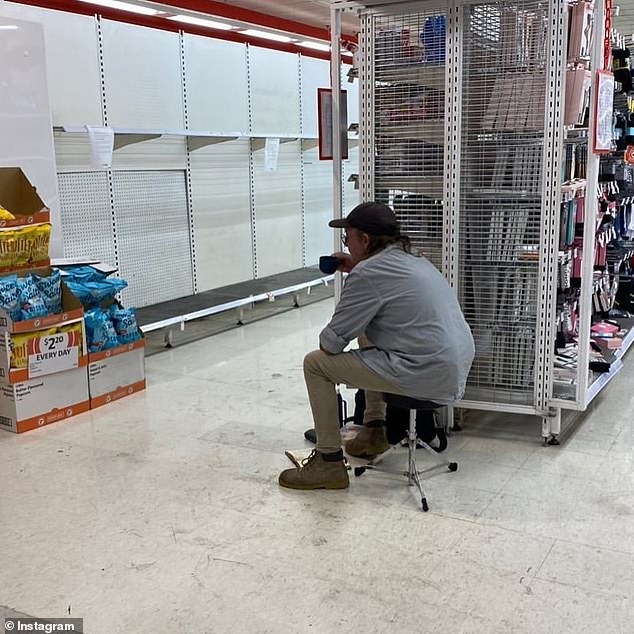 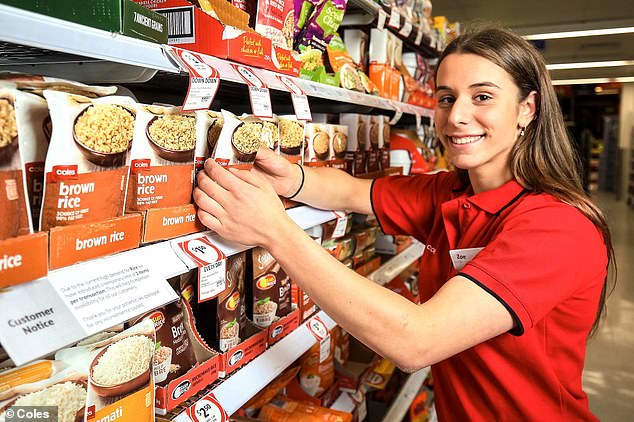 Coles hired 10,000 extra staff in the past three weeks – many being workers laid off as the hospitality industry closed overnight in stage 1 lockdowns – and wants another 4,000

Mr Swindells said people are mostly shopping alone, as they were urged to in an effort to stop coronavirus spreading, but there’s ‘still room for improvement on that’.

‘When we implement something for safety or the government asks people to, generally customers follow it pretty quickly and I think that’s why we’ve had so much success flattening the curve,’ he said.

Part of the struggle in meeting demand, other than the sudden surge in demand driven by coronavirus restrictions, is that shoppers are so hard to predict.

Wipes and other cleaning supplies

No one saw the toilet paper crisis coming and Mr Swindells still says ‘I don’t know what people are doing with 20 million-odd rolls a week’.

‘It’s so difficult to pick what people will buy right now. I usually have a good idea of the week early on, but now I can look at our sales figures at lunchtime and get [my predictions] wrong by the end of the day, that’s how volatile it is,’ he said.

Coles hired 10,000 extra staff in the past three weeks – many being workers laid off as the hospitality industry closed overnight in stage 1 lockdowns – and wants another 4,000.

Easter, the second biggest time of the year after Christmas, looms as a big test, starting today, especially with strict limits on customers in stores at one time being introduced on Monday.

Long queues formed outside some stores but Mr Swindells said only about five per cent of locations had any lines and they moved quickly.

He said Coles modelling showed 90 per cent of stores won’t have queues over Easter and ‘it would be rare to see one except at the really big traders’. 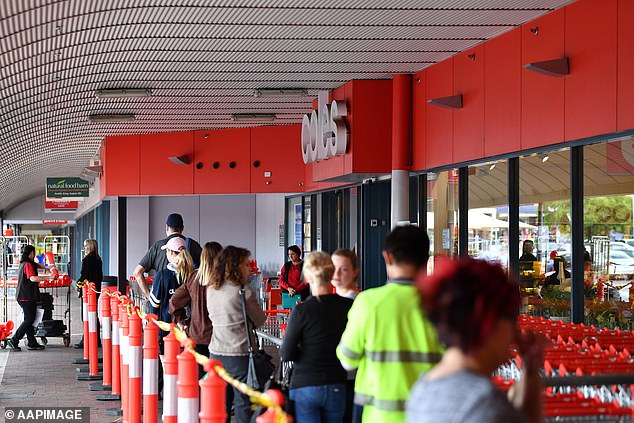 Long queues formed outside some stores (a store in Firle, Adelaide, pictured) when customer limits came in on Monday but Coles said only about five per cent of locations had any lines and they moved quickly 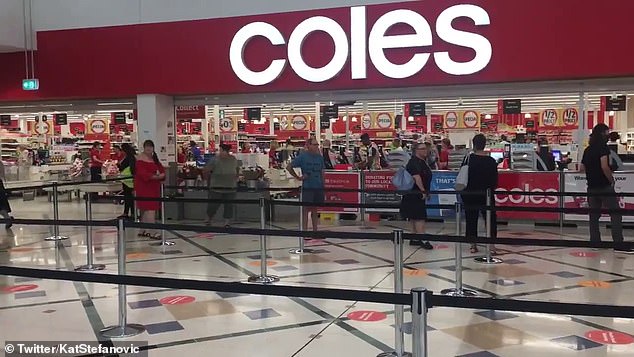 Coles modelling showed 90 per cent of stores won’t have queues over Easter and ‘it would be rare to see one except at the really big traders’. Lines are likely to be more like this one in Queensland at most shops

Mr Swindells said there were signs demand had peaked and once the grocery chain survived Easter it would have a chance to catch up its supply.

‘I think once we get through Easter it will be fairly straightforward,’ he said. There is also less drama and angst from customers and fewer hoarders.

‘Customers are starting to understand where we are now and it’s a bit calmer than previous weeks.’

Buying restrictions on milk and mince were taken off this week as supply has caught up on those products.

However, home delivery was expected to be limited to elderly and vulnerable customers for some time.

‘We had to turn off delivery because of supply, you can’t have an online offer if it’s not on shelves, it just disappoints people,’ Mr Swindells said.

‘We will double our online delivery capacity by the end of next week and we’re making sure that all of that capacity goes to all the people who really need it.’ 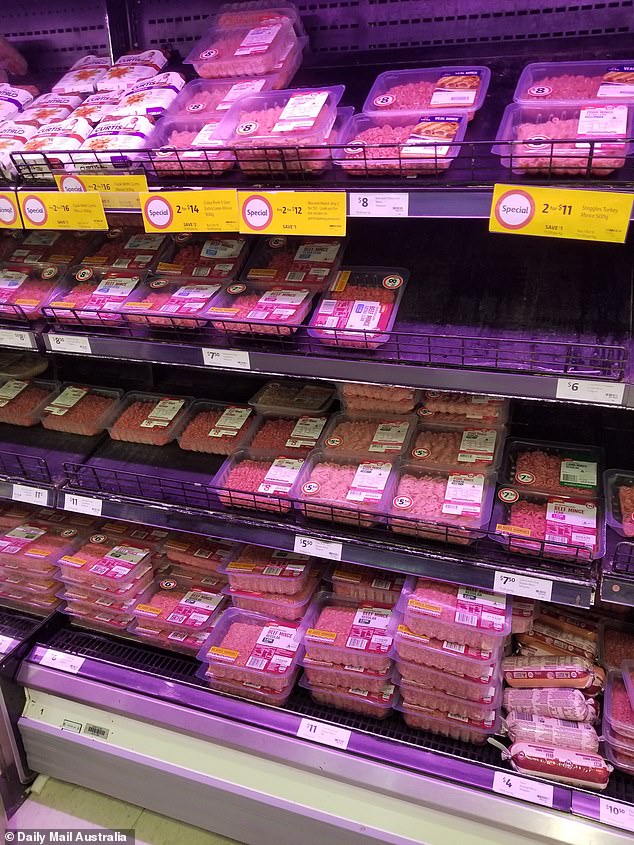 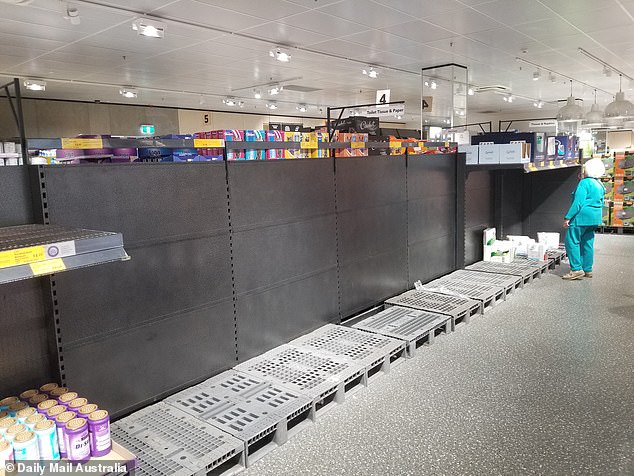 It started with people over 70 and this week linked to the government’s My Aged Care site to find more people in need.

‘That’s why we need to make sure our supermarkets are safe for people to shop because the reality is people still need to come to shops,’ he said.

‘So anyone who can help a neighbour, should.’

Coles also joined other supermarkets in opening its stores from 7am to 8am on Mondays, Wednesdays, and Fridays for elderly and disabled shoppers to have free reign before the hordes descend.

THE FOOD YOU NEED FOR 14 DAYS IN QUARANTINE