Cops probe anti-Semitic hate crime after man, 63, was hit with a brick while going for a jog

A 63-year-old rabbi who was beaten with brick during an attack in a Brooklyn park believes his attacker wanted to kill him.

Abraham Gopin, a father of ten and grandfather, was going for his usual jog near the ballfields inside Lincoln Terrace Park when he was attacked.

Police are now investigating a possible hate crime in Brooklyn after a 63-year-old Orthodox Jewish man was attacked with a huge brick while exercising in a park.

The attack happened around 7.30am on Tuesday in the Crown Heights section of the borough.

63-year-old rabbi, Abraham Gopin, who was beaten with brick in Brooklyn believes his attacker wanted to kill him 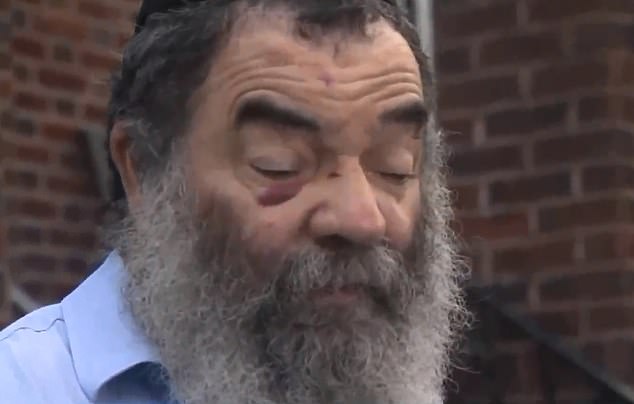 The Brooklyn rabbi lost two front teeth, suffered a broken nose and multiple lacerations to the face in the beating

The rabbi was struck in the face, knocking out his front teeth and causing a cut to his forehead. The struggle continued before the suspect fled the location on foot.

‘He was about to kill me,’ Gopin said to ABC7.  ‘Definitely, because a very short time before, a Caribbean lady was jogging over there and he didn’t touch her, and he saw me and he jumped like a tiger. So by his act, I would say it was a hate crime,’ he said.

Gopin also said he thought heard the man yell ‘dirty Jew’ at him.

He was wearing a yarmulke when a black man with dreadlocks allegedly punched him.

The suspect also allegedly yelled an anti-Semitic slur before blindsiding the victim according to CBS2.

‘He certainly feared for his life,’ Friedman, told CBS2. ‘It was clear to him that the man was trying to kill him. Those were his words – the man was out for blood, that’s for sure.’ 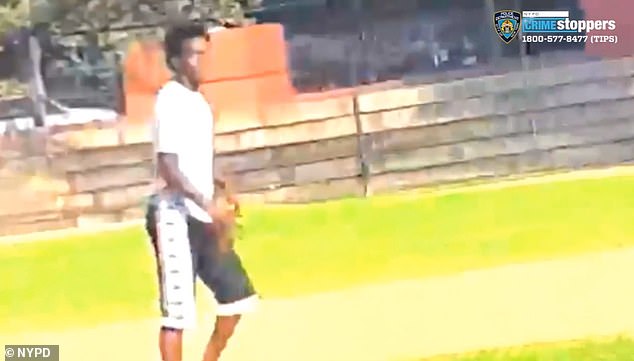 Gopin claims he was attacked by a black man with who punched him, possibly pictured here 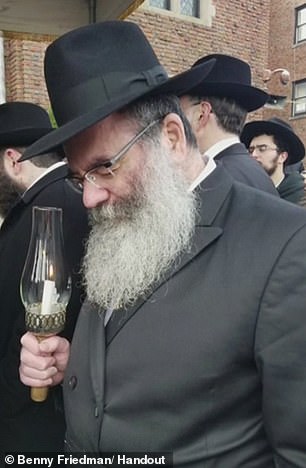 Abraham Gopin, 63, man was attacked in a Brooklyn park on Tuesday morning

Gopin’s family have described what happened and say a stranger approached him in the park, yelling a slur before punching him in the face.

Gopin was then hit over the head with a the enormous brick, knocking out his teeth and leaving him with a bloody gash.

‘From the yelling, he didn’t respond. But from the moment that the boulder flew, he said he went into self-defense mode,’ said Friedman. ‘Unfortunately, these kind of events are becoming more and more prevalent.’

‘My father-in-law says there was no question this man had murder on his mind. He is in hospital now with a broken nose, missing teeth, stitches on his head and lacerations on his body,’ Friedman tweeted together with pictures of blood-stained clothes. 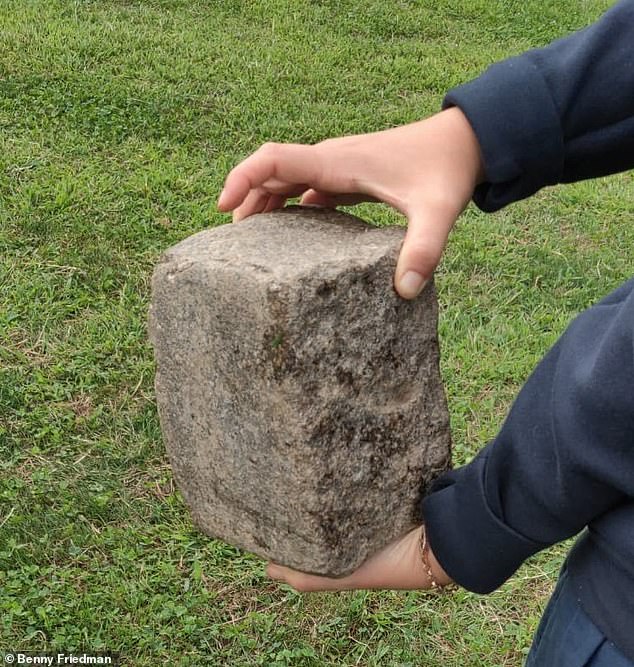 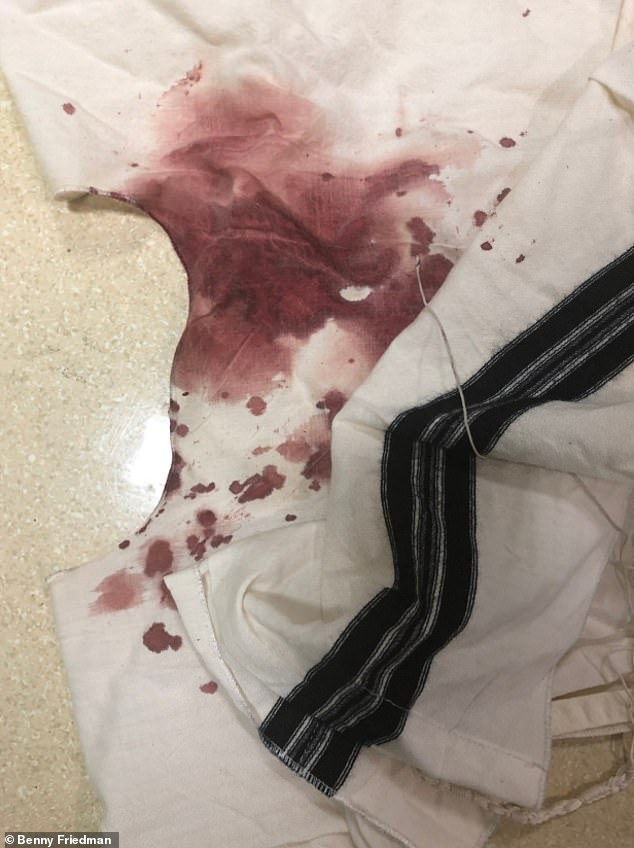 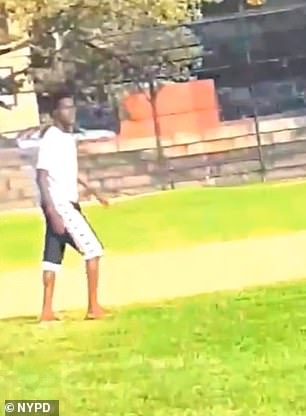 Police are now trying to find the suspect who is behind the assault and have released video of the person who they believe to be responsible.

Mayor Bill de Blasio condemned the attack on Twitter, urging anyone with information to call police.

‘The NYPD Hate Crimes Task Force is investigating this despicable act of violence, and we will find the attacker,’ de Blasio wrote. ‘This city will stop at nothing to protect our communities from hate and violence.’

‘I’m disgusted by the vicious attack on Avraham Gopin this morning in Crown Heights’ Lincoln Terrace Park. No one should be attacked, hate-fueled or not. Violence is violence, wrong is wrong,’ wrote Brooklyn Borough President Eric Adams. 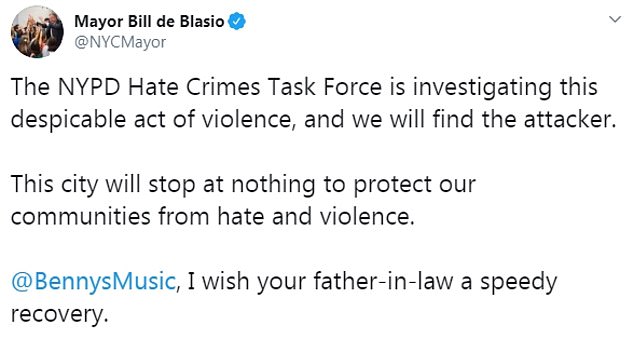 ‘To just walk into a park to enjoy themselves and leave in a stretcher, and that is totally unacceptable,’ New York City Councilman Chaim Deutsch said. ‘We are in a crisis here in New York City. We need to do more to prevent such incidents from happening, and we need to work together as communities.’

Gopin’s family say they are grateful he managed to make it out of the park alive.

‘There’s no question that things could have been far worse than they are now. I believe he’s going to continue living just the way he was,’ Friedman said.

‘We need safer communities. Where I come from in Minnesota, this would be front page headlines. But here in Brooklyn, this is just the latest event.’

The victim has since left the hospital and is now recovering at home.

The Anti-Defamation League said it was offering a reward of up to $5,000 for information leading to the arrest and conviction of the assailant.’

According to the NYPD, there have been 145 anti-Semitic hate crime complaints in the city so far this year. In 2018 there were 88 complaints.