Bogus social media scare campaigns have tried to link the virus’s spread to the sale of Chinese food products in suburbs with large Asian populations.

Meat and seafood sellers were doing a brisk trade at Cabramatta in Sydney’s south-west on Wednesday, despite it being quieter than usual due to the Lunar New Year.

Still, concerns about the deadly disease – which broke out in ‘wet’ markets with very different conditions in the Chinese city of Wuhan – lurked behind face masks.

Student Jenny, 17, was shopping with her mother Linda, 50. Both wore masks to protect themselves from germs spread in crowds.

Jenny said she generally only put on a mask when in ‘larger crowds in specific areas’.

Cabramatta market shoppers Linda, 50, and her student daughter Jenny, 17, were among many many wearing face masks to protect themselves, amid coronavirus fears 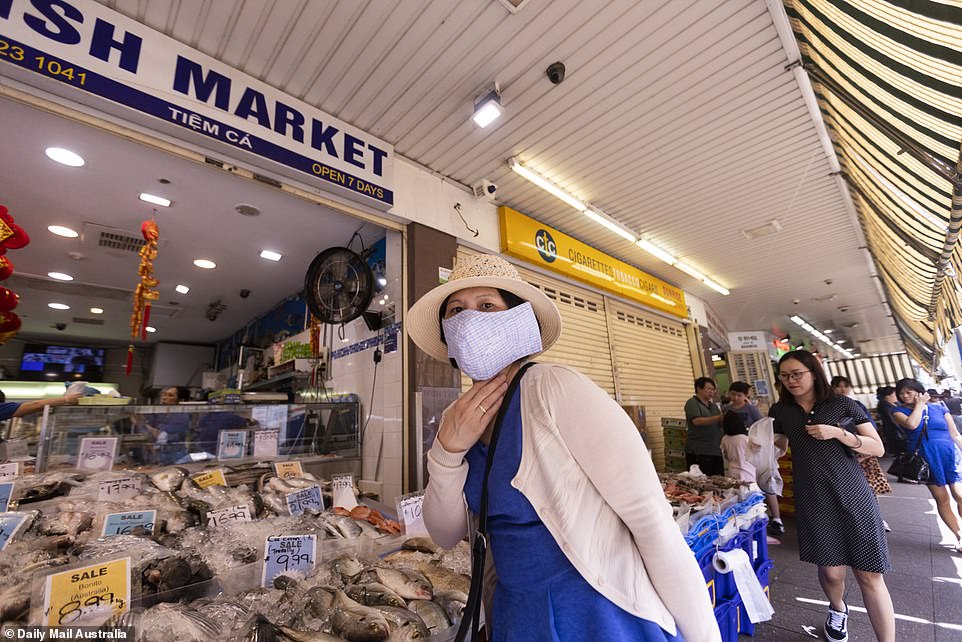 Meat and seafood sellers were doing a brisk trade at Cabramatta in Sydney’s south-west on Thursday, despite it being quieter than usual due to the Lunar New Year 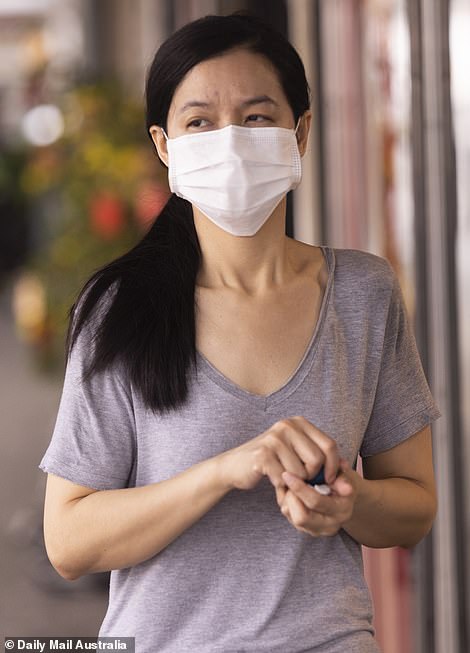 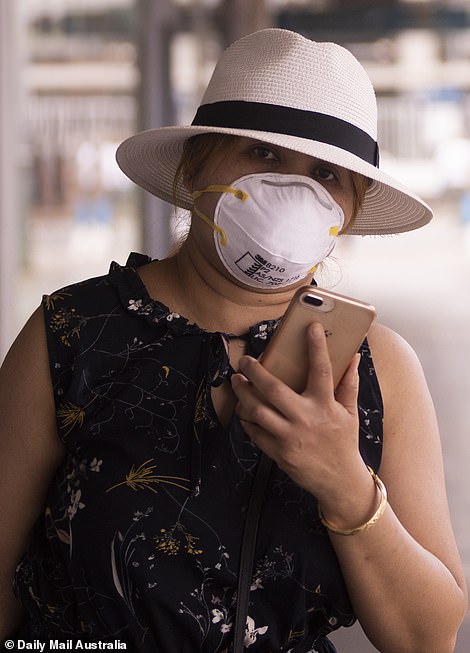 Even without the fear whipped up by the coronavirus, surgical-style face masks are popular in East Asian cultures as a polite way to prevent the spread of diseases such as the common cold 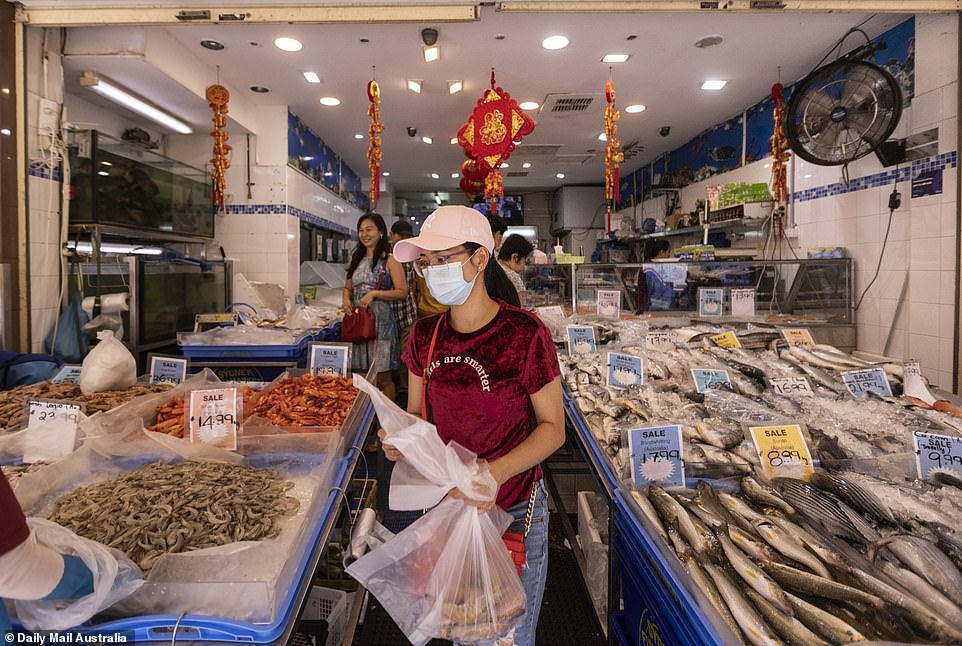 Fresh seafood on display in Cabramatta, in the city’s south-west. Business was quieter than usual due to the recent Lunar New Year 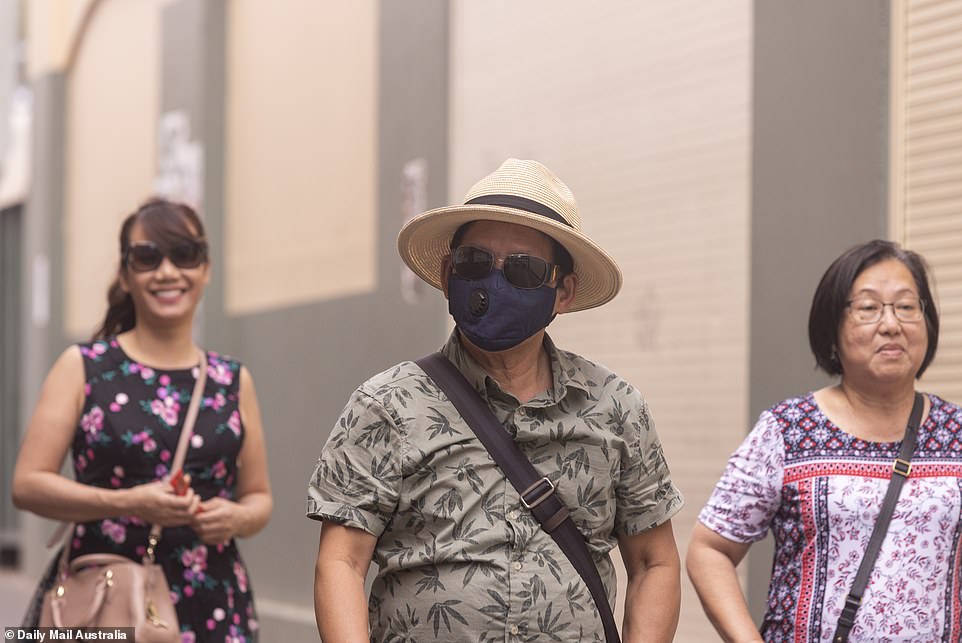 ‘More like Chinese-dominated places like Burwood and Eastwood – the ones where I’ve heard there are confirmed cases,’ she said.

‘I’ve heard that in Cabramatta there might be a case too.’

Jenny said the mask was ‘just a precaution’ and that she would rather be safe than sorry.

She would be starting studies at the University of Western Sydney in March and was worried about that environment.

‘I heard the last case was a student at the University of New South Wales,’ she said.

‘Being with other people you might not know if they are infected or not. 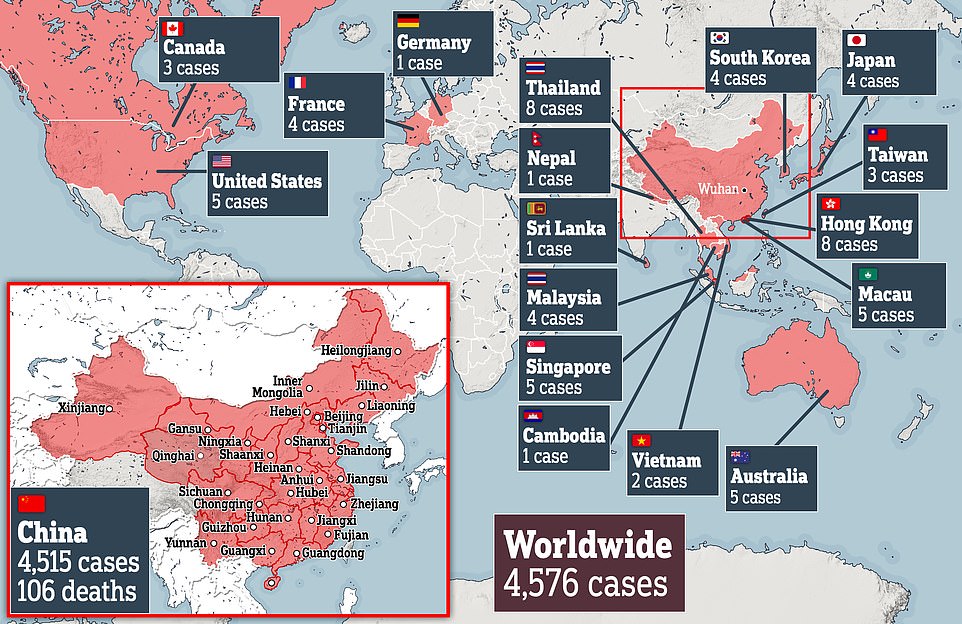 The worldwide spread of the coronavirus: The SARS-like disease is believed to have first spread from animals to humans in the Chinese city of Wuhan and since been transmitted from human-to-human around the world

The new ‘novel’ coronavirus was first detected in Wuhan in early December and has since spread to countries including Australia.

It has killed at least 106 people and infected more than 4,000 worldwide with five confirmed cases but no deaths in Australia.

Those five people had all recently visited Wuhan, where the Huanan Wholesale Seafood Market is considered a likely source of the outbreak.

Such ‘wet’ markets sell meat and seafood alongside live animals such as dogs, rats, snakes, civets and supposedly koalas.

In Cabramatta, a young man wearing a face mask outside Dutton Plaza said he was going about his business as usual.

‘I’m not really worried,’ he said on Wednesday afternoon. ‘I’m just taking precaution because of what is happening in China. 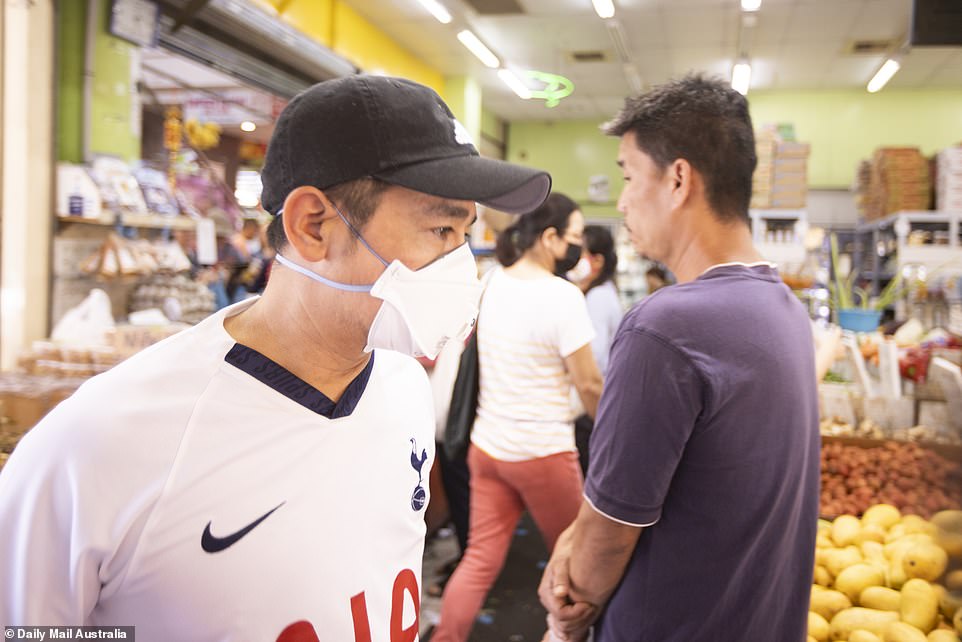 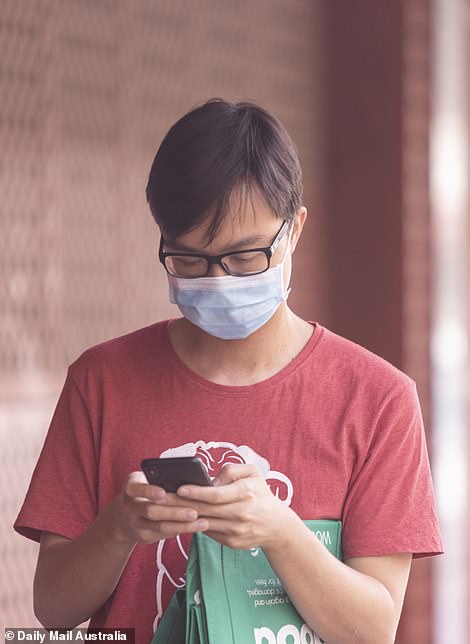 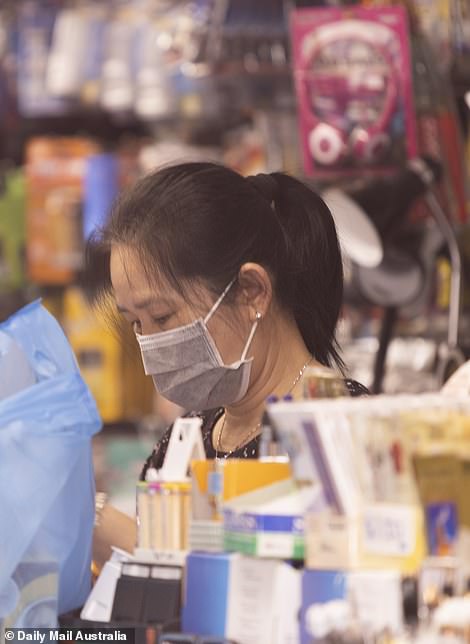 Several chemists and warehouse stores across Sydney have run out of facemasks and hand sanitiser in the wake of the coronavirus outbreak (left, right) 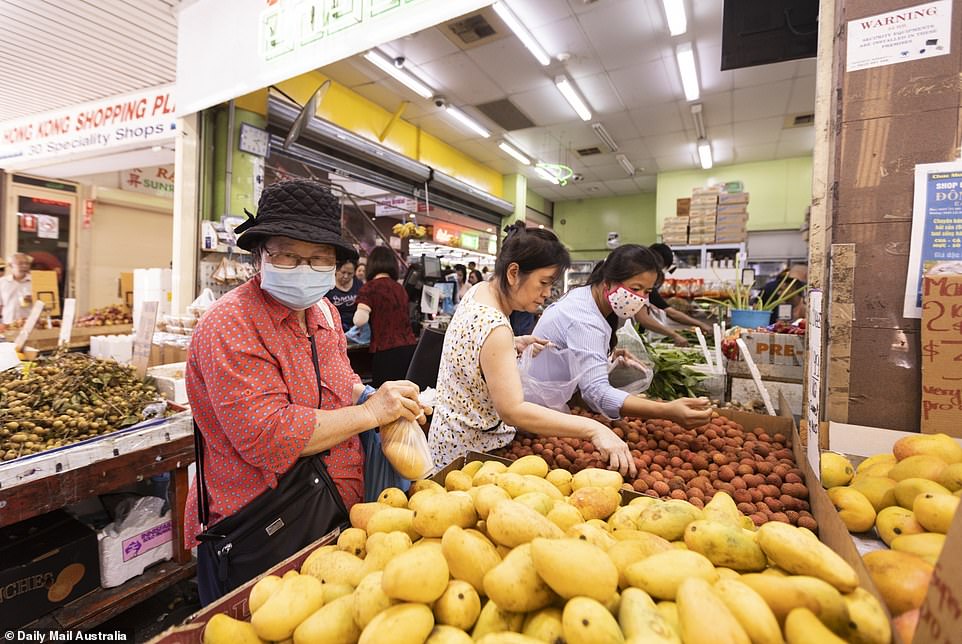 Tuan, 37, and his wife Tien, 34, were shopping in Cabramatta with their five-year-old daughter.

None of them was wearing a mask. 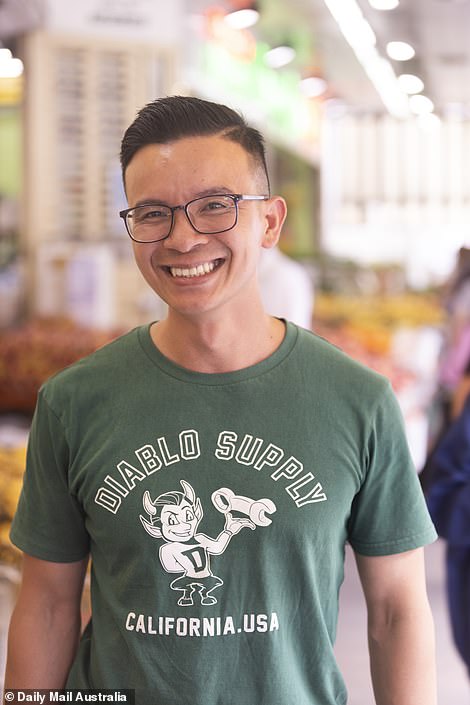 Nothing to worry about: Shopper Tuan said ‘well be all right’ and warned people to ‘be sensible but not panicking too much … generally speaking it should be fine’

‘I was a little bit worried when we saw the news,’ Tuan said.

‘But generally in Australia we’ll be all right. If something (more serious) happens it would be all over the news.

‘We have friend in China – she’s very worried about everything.’

Tuan’s attitude was: ‘Be sensible but not panicking too much.’

‘Generally speaking, it should be fine,’ he said.

‘When we go to the public places where there’s so many people you don’t know whether they’ve travelled overseas.

‘You can’t tell that. That could be a problem.’

He and Tien would continue to avoid large crowds when possible and monitor news reports.

‘I don’t need to go out and hunt for the masks,’ he said.

His wife felt the same way.

Another man shopping with his wife and young son, who was the only one of the three wearing a mask, did not have time to talk.

‘I want to take him home as quickly as possible because of the coronavirus,’ he said.

Bogus social media scare campaigns have tried to link the spread of the virus to the sale of Chinese food products in Sydney suburbs with large Asian populations such as Cabramatta.

One fake ‘urgent health notice’ being circulated wrongly claims tests of air at train stations including Cabramatta and Strathfield have detected coronavirus. 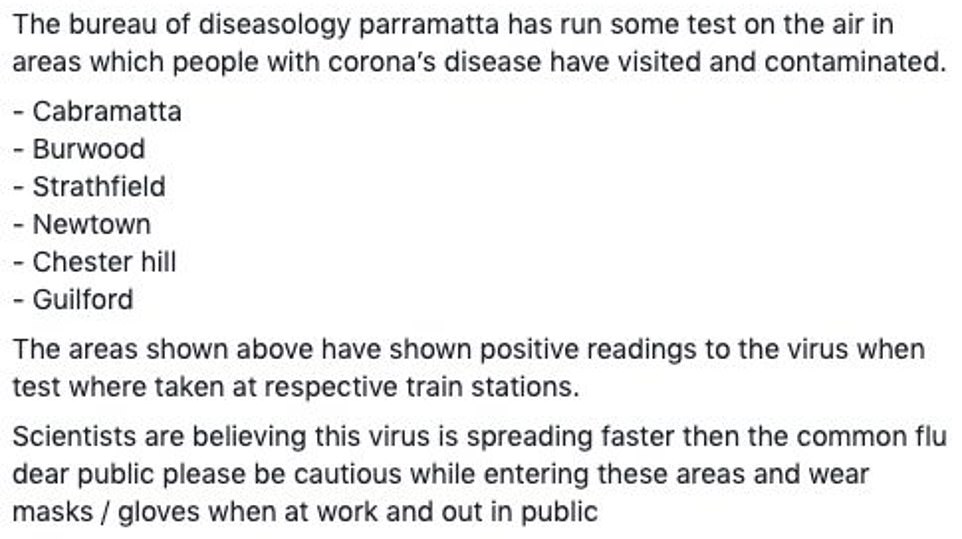 Fearmongering: A hoax Facebook post wrongly claims that a ‘bureau of diseasology’ (which does not exist) had run tests in several Sydney suburbs with large Asian populations – including Cabramatta and Burwood

Such messages are often accompanied by advice that residents and visitors to those areas wear face masks and gloves.

A middle-aged woman shopping in Cabramatta with her son said the pair wore masks whenever they were out in public, ‘just to protect ourselves’. 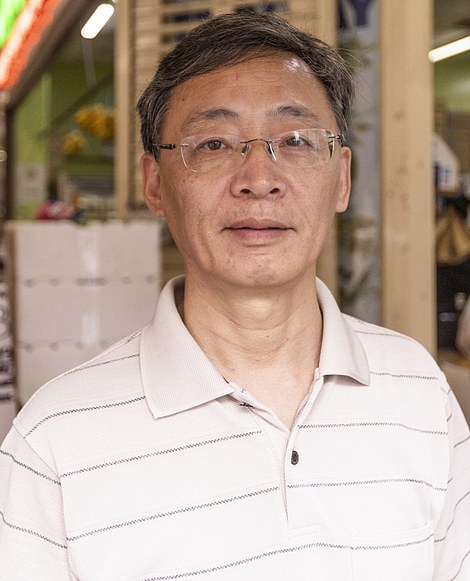 In the face of bogus scare campaigns, printing businessman Dong Yang said ‘I don’t think it’s that serious … there’s no need to wear the masks in Australia’

‘We’re just worried about the coronavirus,’ she said. ‘Just when we go out to places where there’s a lot of people.’

No one wearing a mask took it off when asked why there were wearing one.

Dong Yang, who runs a printing business, was not wearing a mask and said more people covered their faces in Cabramatta when bushfire smoke enveloped Sydney.

‘I don’t think it’s that serious,’ the 62-year-old said of the coronavirus threat as he shopped with his wife.

‘And also the authorities say maybe there’s no need to wear the masks in Australia.

‘We believe the authorities and what the government says. I think in Australia it’s under good control.

‘Everything should be okay. Actually we’re not worried too much about it.’

Mr Yang had instead been concentrating on raising funds to send masks and protective clothing to his homeland in his role as chairman of the Australia-China Business Summit.

THE FACTS ABOUT THE NOVEL CORONAVIRUS

Symptoms of coronavirus infection include coughing, fever and breathing difficulties.

Severe cases can lead to pneumonia, kidney failure and death.

The current coronavirus is being transmitted from person to person via droplets when an infected host coughs or sneezes.

It can also be spread by touching contaminated surfaces such as hand rails and door handles.

None of the cases detected in Australia has involved local person to person transmission.

Coronavirus has an incubation period of between one and 14 days and there are fears it can be spread before symptoms are showing.

There is no specific medicine to treat the virus at this stage.