Coronavirus UK: Sticking to the rules could prevent lockdown

Britain could avoid another coronavirus lockdown if at least half of the nation follows hand-washing, social distancing and mask-wearing rules, research has suggested.

Experts based in the Netherlands used a complex computer model to stimulate how effective coronavirus-prevention methods would be in halting another crisis.

When a combination of the virus-controlling methods are practised by at least 50 per cent of the population, scientists found ‘a large outbreak can be prevented’.

The peak of the epidemic could be stalled for so long – up to a year – that the odds of it ever spiralling out of control again are much smaller.

But if the methods are practised properly by fewer than half the population it would barely have any effect on controlling a crisis, which could see policymakers decide to implement another lockdown.

Experts also warned that government-initiated social distancing alone is ‘unlikely to be sufficient’ for controlling Covid-19.

The researchers said the findings could help direct countries out of lockdown while avoiding a devastating second wave of the virus. But scientific models do not always come true because they are reliant on algorithms piecing together data — and don’t take into account real-life twists and turns in the course of any outbreak.

Pictured bottom: 50 per cent efficacy of prevention measures would cause the attack rate to fall to just four per cent, and top: Daily cases at the peak of the epidemic would also be lower

If half of the nation sticks to the measures, it would delay the peak of an outbreak by 12 months until the peak of the epidemic

In the study, researchers at the University Medical Center Utrecht developed a new model to predict the spread of Covid-19.

The model helped determine the efficacy of prevention measures on three different outcomes: 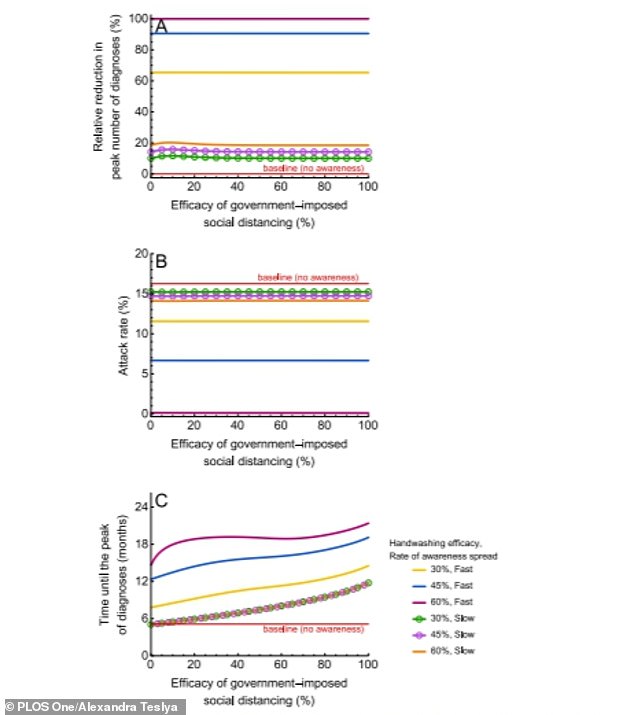 A large outbreak could be prevented either by making one measure, such as handwashing, 50 per cent effective, if used with government enforced social distancing (pictured)

IS A SECOND WAVE INEVITABLE?

Almost all scientists agree the infection is bound to re-emerge in a second wave in the absence of a vaccine or cure for the coronavirus.

Dr Andrea Ammon, the EU’s boss on disease control, has warned the virus is not going away any time soon because it is ‘very well adapted to humans’.

She has urged Europe to prepare for another crisis, which she said was inevitable because so few people will have developed COVID-19 immunity.

In an interview with The Guardian on May 21 she said: ‘The question is when and how big, that is the question in my view.’

Dr Hans Kluge, director for the WHO European region, said he was ‘very concerned’ a surge in infections would coincide with other seasonal diseases such as the flu.

Speaking exclusively to The Telegraph in mid-May, he cautioned that now is the time for ‘preparation, not celebration’ across Europe – even if countries are show positive signs of recovery.

Professor Hugh Pennington, an emeritus microbiologist at University of Aberdeen, has said there is no evidence there will be a second wave of the coronavirus, contradictory to the thoughts of others.

Scientists have repeatedly referred to the 1918 Spanish flu pandemic as a sign the world is heading towards a devastating relapse in cases. But the flu is biologically completely different from the coronavirus and should not be comparable, Professor Pennington said.

But he added: ‘If we get the easing of lockdown wrong, far more likely would be a continuation of infections, many in the form of localised outbreaks, but not waves or peaks.’

Writing in The Daily Telegraph , he said Covid-19 tends to cause clusters of cases, which bodes well for the future.

Professor Mark Woolhouse, of Edinburgh University, said it is more likely the UK will experience small outbreaks because the R rate of the coronavirus has been squased.

At its peak, the reproduction – or R – R number was between two and three, which meant every infected person passed the virus on to two or three others. It is now between 0.7 and 0.9, putting it below the crucial level of one, which is when cases spiral out of control.

Professor Woolhouse, who is part of the Government’s Scientific Advisory Group for Emergencies (Sage), told The i: ‘Am I concerned that the R number might creep above one? Yes I am. But am I concerned it will go back to where we were at the beginning of the first wave, no I’m not.

‘The only way that a second wave could happen is if there were a complete collapse in lockdown and everybody just gave up on it despite what the Government said – and that’s just not going to happen.’

The R number has been guiding Government on when to lift lockdown. But the K number will become crucial for fighting a potential second wave, scientists believe. The K number tracks the extent to which new outbreaks are caused by a few ‘superspreading events’.

The three outcomes changed depending on take-up of the prevention methods, the findings published in the journal PLOS Medicine show.

These were handwashing and mask wearing, which both reduce the susceptibility to catching the virus.

The other measure was self-imposed social distancing, to reduce contact with other people who may unknowingly carry the virus.

Researchers led by Alexandra Teslya also modelled what would happen if awareness of the disease quickly spread in the population, compared to if it was slow. All the simulations started with just one initial case and the mathematical model took into account various factors.

In a baseline model in which the virus was able to spread naturally, the team predicted it took about 5.2 months to reach the peak of the epidemic, when some 46 cases per 1,000 people were diagnosed each day. The attack rate was about 16 per cent.

But all prevention measures helped to reduce this depending on how strongly they were practised – particularly when awareness of the disease spread rapidly.

The researchers wrote: ‘For a slow rate of awareness spread, self-imposed measures have less impact on transmission, as not many individuals adopt them.

‘However, for a fast rate of awareness spread, impact on the magnitude and timing of the peak increases with increasing efficacy of the respective measure.

‘For all measures, a large epidemic can be prevented when the efficacy exceeds 50 per cent.’

Graphs showed if 20 per cent of people adhered to prevention measures, it would only delay the peak of the epidemic by an extra month.

It would lead to around 40 per cent fewer cases at the peak of the epidemic, and the attack rate would fall from 16 per cent to 14 per cent.

But at 30 per cent, the impact on the epidemic can be ‘significant’, according to the researchers.

In a scenario where 50–60 per cent of the population adopted the three prevention measures, a large epidemic would be stopped completely.

It would give an additional 12 months until the peak of the epidemic, reducing the peak number of daily cases by almost 100 per cent.

And it would cause the attack rate to fall to just four per cent.

The study showed that if just 30 per cent of the population practised good handwashing, it could have a ‘significant effect’.

But a rapid spread of disease awareness would be critical for those results in both situations, the paper said. Otherwise it hardly makes any difference to the natural spread of the disease.

The researchers said their findings help model how to prevent a second wave as a country comes out of lockdown.

They said: ‘We stress the importance of disease awareness in controlling the ongoing epidemic and recommend that, in addition to policies on social distancing, government and public health institutions mobilise people to adopt self-imposed measures with proven efficacy in order to successfully tackle Covid-19.’

Professor Yuming Guo, of Monash University in Australia, wrote an accompanying perspective which stated: ‘Many of the self-imposed prevention strategies have very limited impact on the economy but contribute very significantly to epidemic control and are likely to play a very substantial role in control.’

He agreed that improving awareness of self-imposed prevention methods could stop second epidemics.