A day to remember! Couple get married at Sydney cathedral as 30,000 protesters descend on the city for Black Lives Matter rally

A young couple who waited through a pandemic to celebrate their wedding day had to ignore 30,000 Black Lives Matters demonstrators as they gathered in Sydney.

The unknown newlyweds were spotted after tying the knot at St Andrew’s Cathedral in the heart of Sydney, while protesters gathered on mass nearby on Saturday.

Organisers of the rally originally anticipated about 5,000 demonstrators, but with larger than expected numbers, riled up protesters dispersed throughout surrounding streets.

On the corner of George and Bathurst Street, where the church is located, crowd numbers swelled under the watchful eye of police at Town Hall.

But that didn’t stop the mystery husband and wife from going ahead with their special day – seemingly unfazed by the nearby drama.

A happy couple were spotted in the midst of Sydney’s Black Lives Matter rally at St Andrew’ Cathedral (pictured), having no idea their special day would clash with the protest 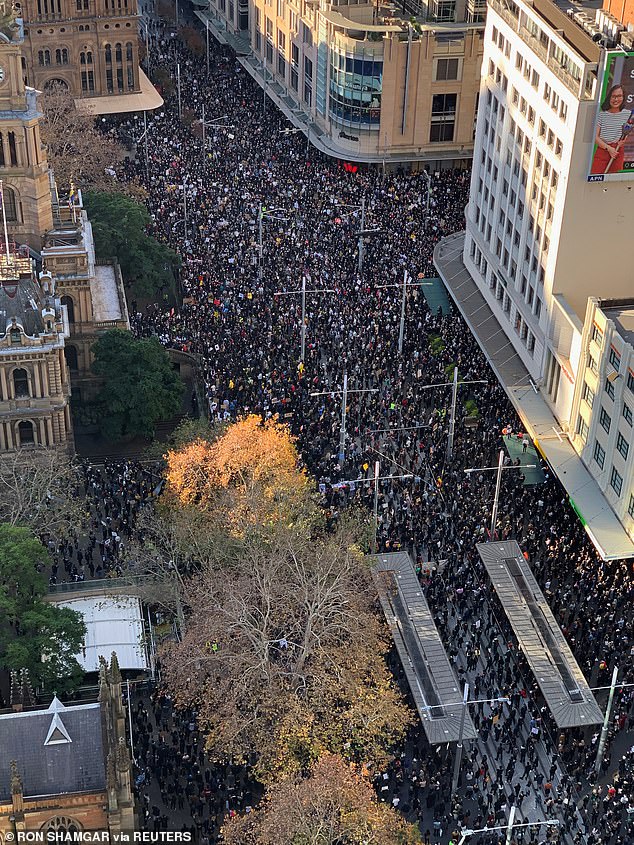 Over 30,000 demonstrators took to the streets to protest against Indigenous deaths in police custody (pictured) on Saturday

The loving couple were seen on the steps of the iconic cathedral staring blissfully into each other’s eyes while they posed for photographs.

Appearing to be completely unconcerned with the drama unfolding around them, the husband who is dressed in a classic black tuxedo is pictured embracing his new wife who is donning a traditional flowing white veil.

Demonstrations were also held in Melbourne, Brisbane and Adelaide to show solidarity with the Black Lives Matter movement in the United States.

It comes amid global outrage following the death of African American man George Floyd, who died in Minneapolis while in police custody.

Organisers in Australia also hoped to highlight the number of Indigenous deaths in custody. 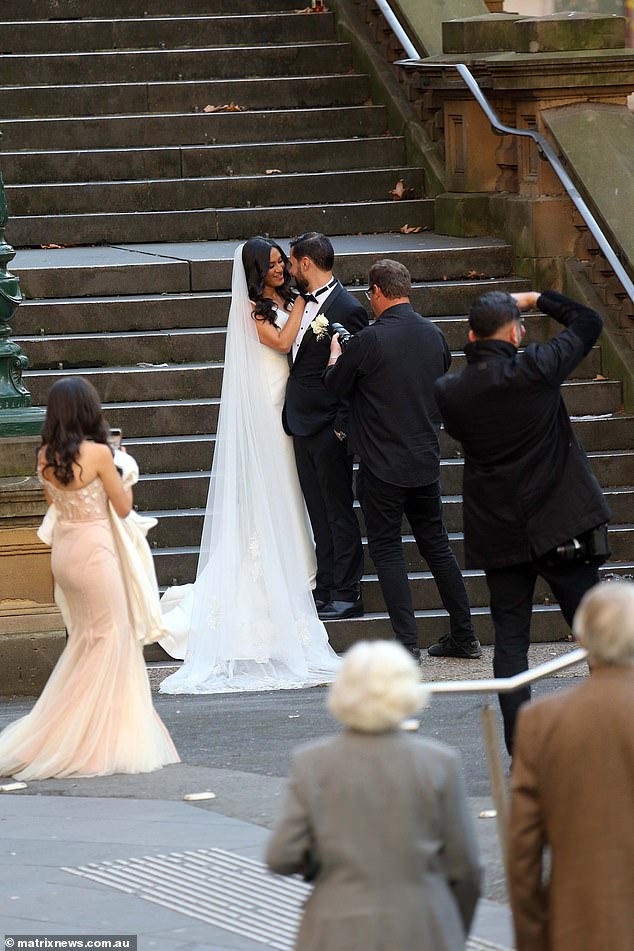 This happy couple said ‘I do’ despite a limit on guests, a pandemic and thousands of protesters (pictured on Saturday) 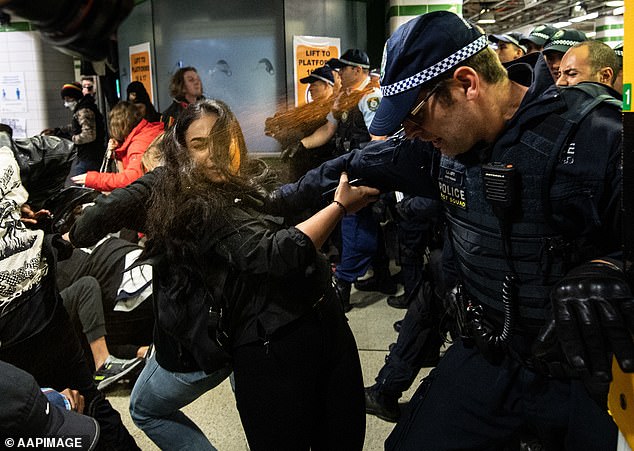 Not far from the cathedral at Central Station, police were seen spraying protesters with pepper spray on Saturday evening 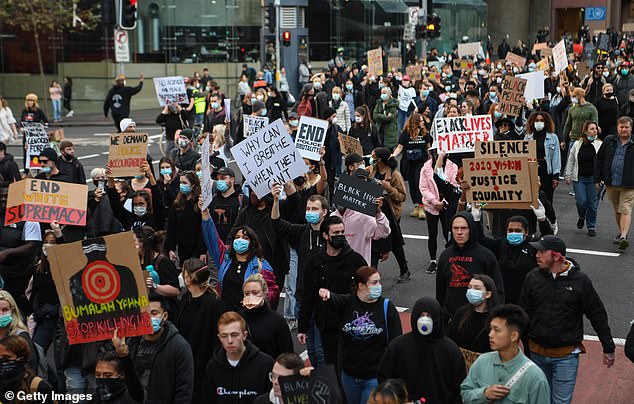 On Friday, the Supreme Court ruled the Sydney demonstration was illegal because it breached the New South Wales coronavirus restrictions on public gatherings.

But just minutes before the rally went ahead at 3pm, the Court of Appeal declared the protest could legally go ahead.

Coronavirus restrictions mean all weddings in New South Wales can only have 20 guests including the two getting married.

But the limit on guests, the pandemic and the protests, could not stop the couple from saying ‘I do’. 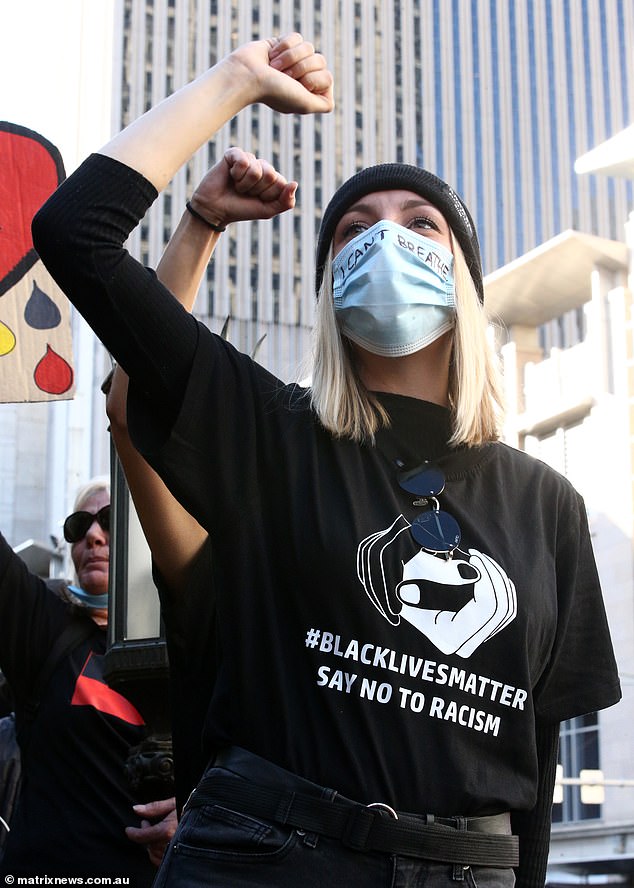 Thousands of marchers took to the streets across all Australian states on Saturday, demanding an end to Aboriginal deaths in custody (pictured in Sydney) 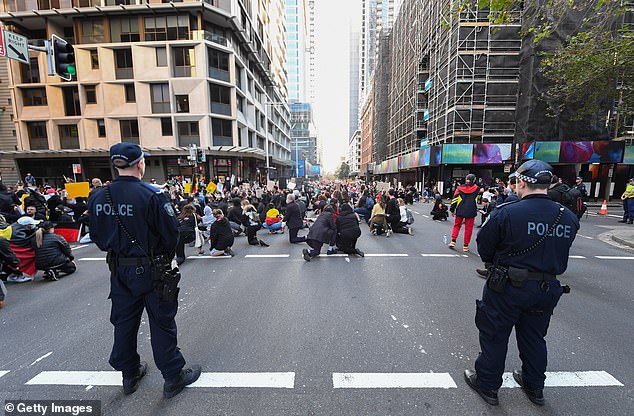 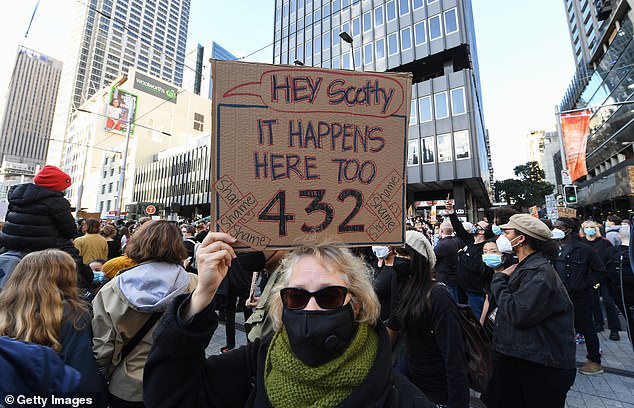