Couple spend $12,000 turning an old school bus into a home for four

A couple have revealed how they transformed an old school bus into a home for their family after struggling to find a house.

Ian Hernandez, 27, and Hannah Hernandez, 25, who are currently in Florida, purchased the old bus off Craigslist in November 2016 for $2,000 and completely redecorated it with the help of family and friends.

The couple, who are parents to daughter Nora, nearly two, and son Atlas, five weeks old, said they were inspired to build the mobile home having lived in a townhome for a year and paying rent on something that they would ‘never own.’

On the road! Proud parents Ian and Hannah Hernandez have revealed how they transformed an old school bus into a beautiful home for their family-of-four, after purchasing the vehicle for just $2,000 in 2016 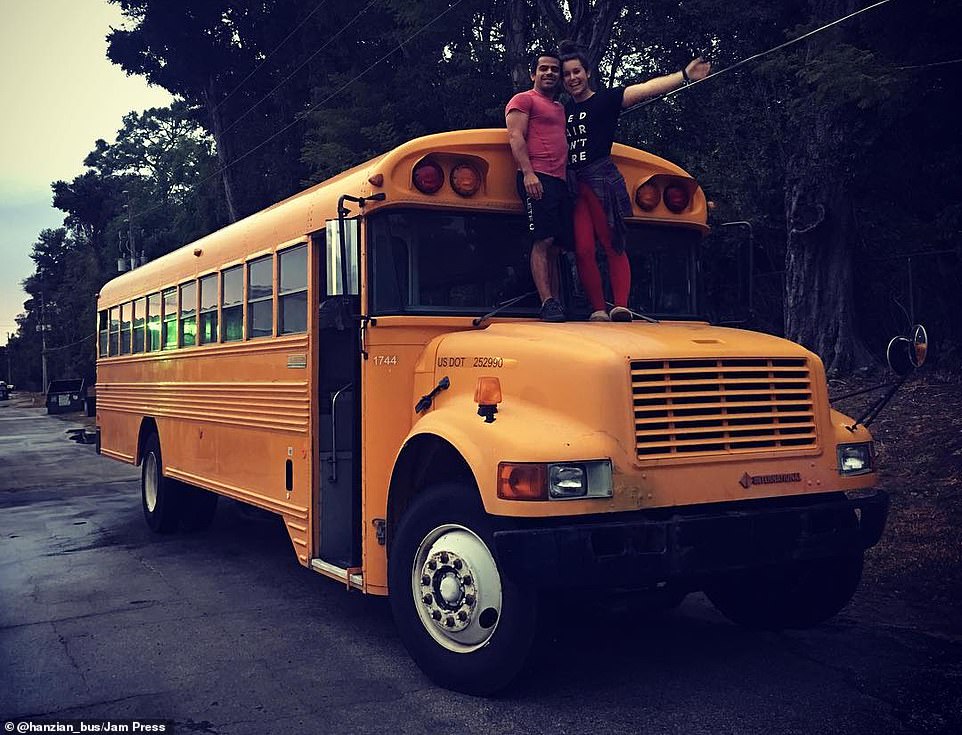 The very beginning: The couple, who did not yet have children when they bought the bus, spent months converting the vehicle into a house, despite not having any experience 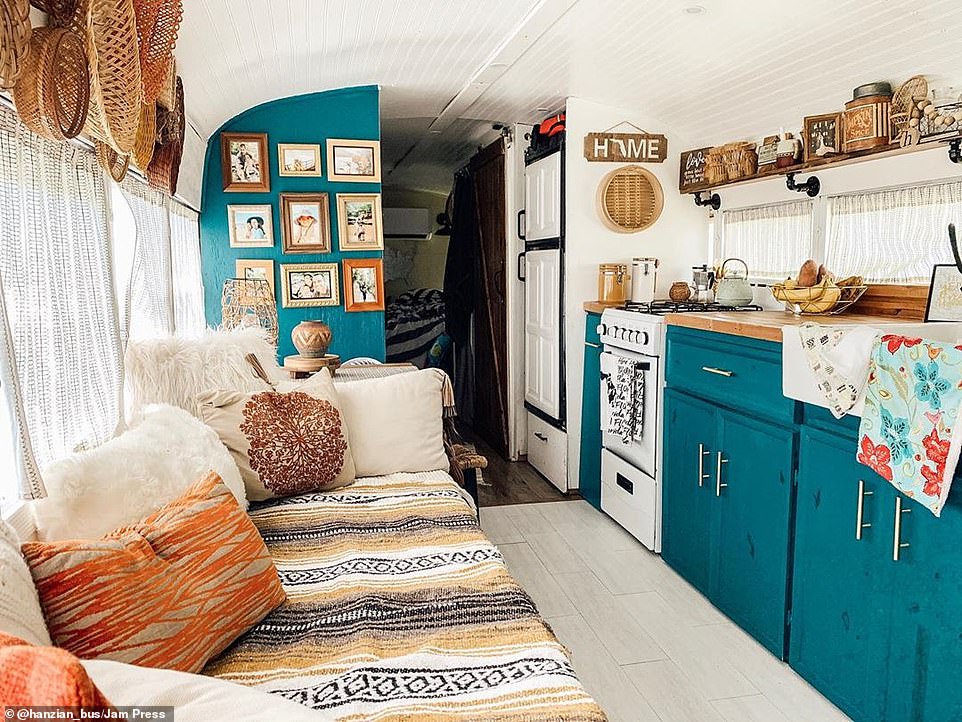 Happy home: Ian, 27, and Hannah, 25, who are currently in Florida, spent $12,000 on the renovations, and say they are constantly making new updates to the house on wheels 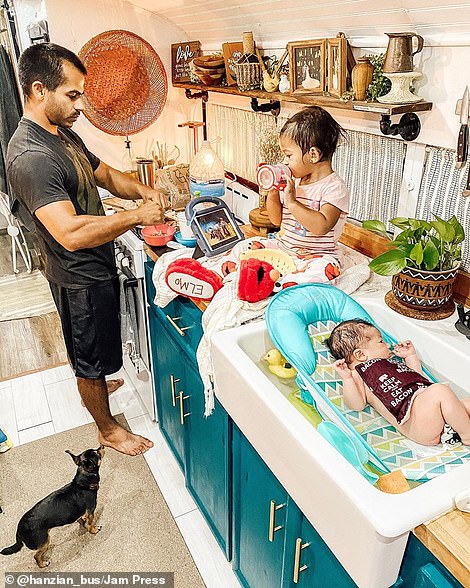 Room for everyone: The couple has two children – daughter Nora, who is nearly two, and son Atlas, who is just five weeks old

Speaking to Jam Press, they explained, ‘We worked constantly to afford it, and before we had children, any free time we had we were taking road trips in our little station wagon all over the country.

‘After that lease was up, we knew we wanted to own something but would not qualify for a house at that time. With the passion for travel, we started thinking that an A-frame trailer would be pretty neat.’

From there, one thing led to another and the couple eventually decided to purchase the school bus, which they felt would enable them to ‘always have a paid roof over our heads that no one can take away from us while also traveling to some of the prettiest spots around the country.’

‘The process of our bus conversion started before we had the bus,’ they said. ‘We researched what type of bus we would want, with what engine and transmission. We did a lot of dreaming up how we’d want things to get a general feel for our layout.

‘Although our layout changed so many times during the process, we finally landed on something and from there, we demo-ed the bus which took quite a few days to get all of the ceiling and wall panels out, the flooring, the seats, and anything else that we didn’t want in there.

‘After the demo, we treated the floor for rust. Thankfully we just had some surface rust, so that part didn’t take long. After that, we laid down our subfloor (insulation, and water barrier).

‘Then came the spray foam insulation on the walls and ceiling. After the insulation was finished, we put on the new ceiling and wall panels. Then we were able to start taping out our layout and framing everything in.’ 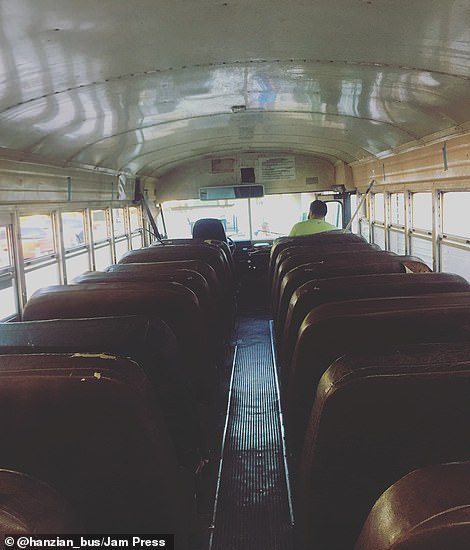 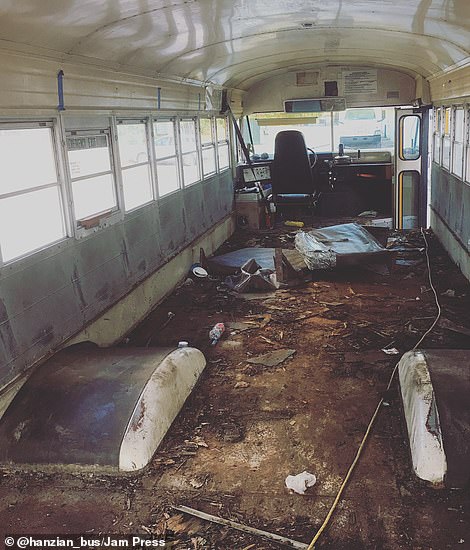 Work: When the couple bought the bus, they had several ideas of what it would look like, but admit that they changed the layout multiple times before settling on a final design 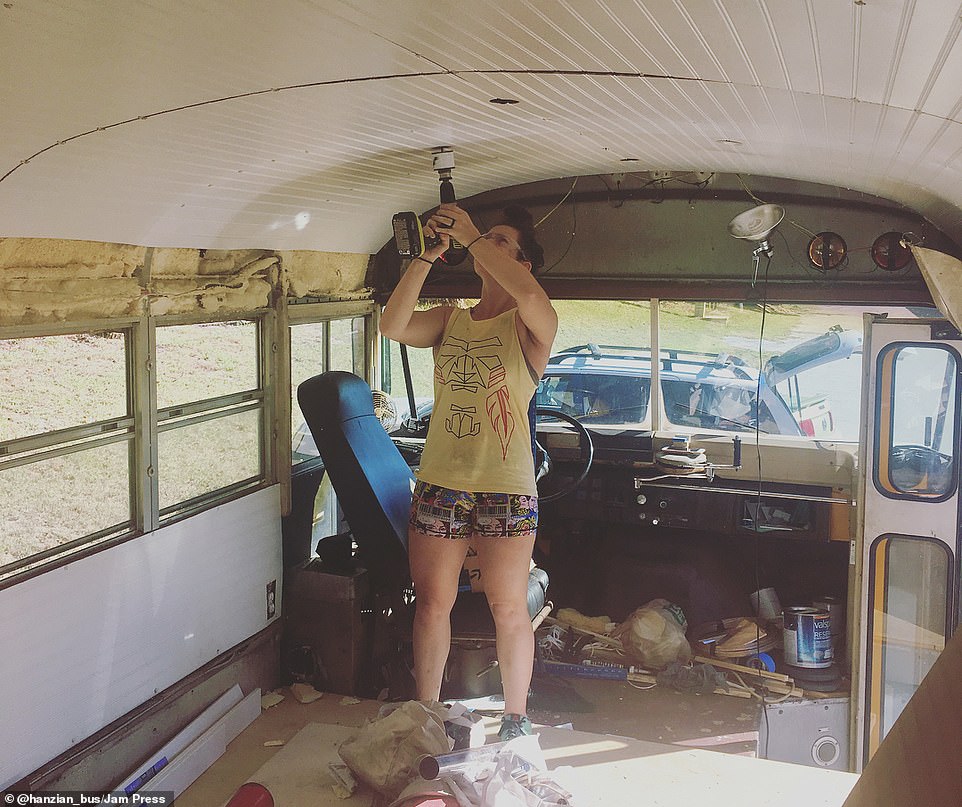 Process: ‘We demo-ed the bus which took quite a few days to get all of the ceiling and wall panels out, the flooring, the seats, and anything else that we didn’t want in there,’ the couple explained 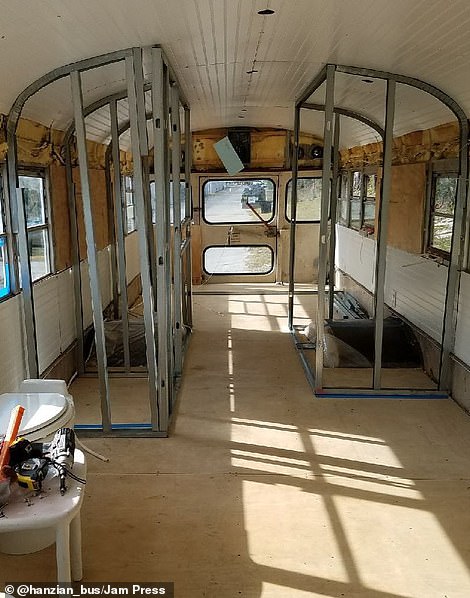 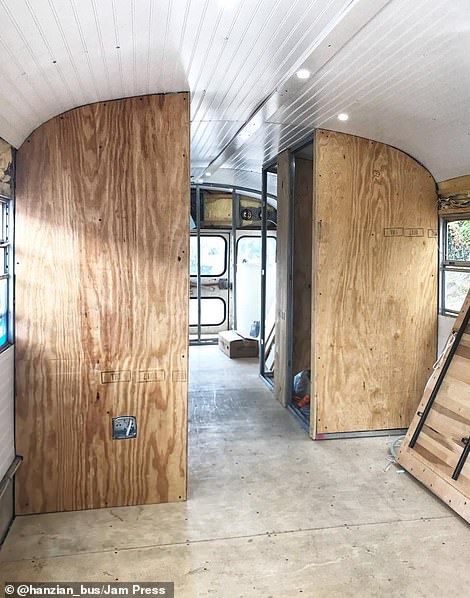 Easy does it: After removing everything from the vehicle, leaving it as a blank canvas, the couple had to work to remove the surface rust from the bus before they began building 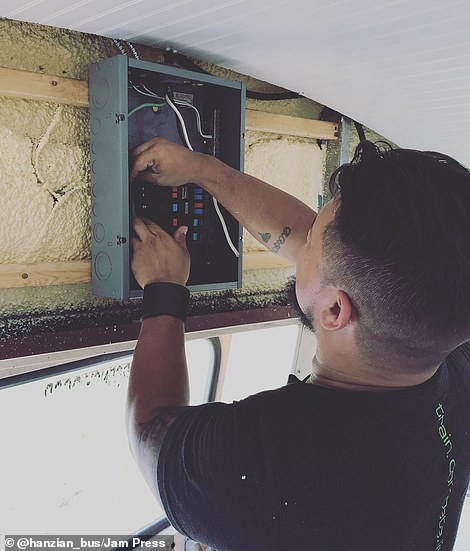 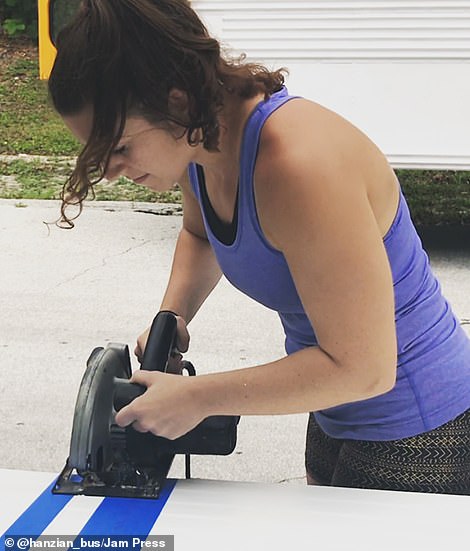 Taking time: ‘After the insulation was finished, we put on the new ceiling and wall panels. Then we were able to start taping out our layout and framing everything in,’ the couple shared 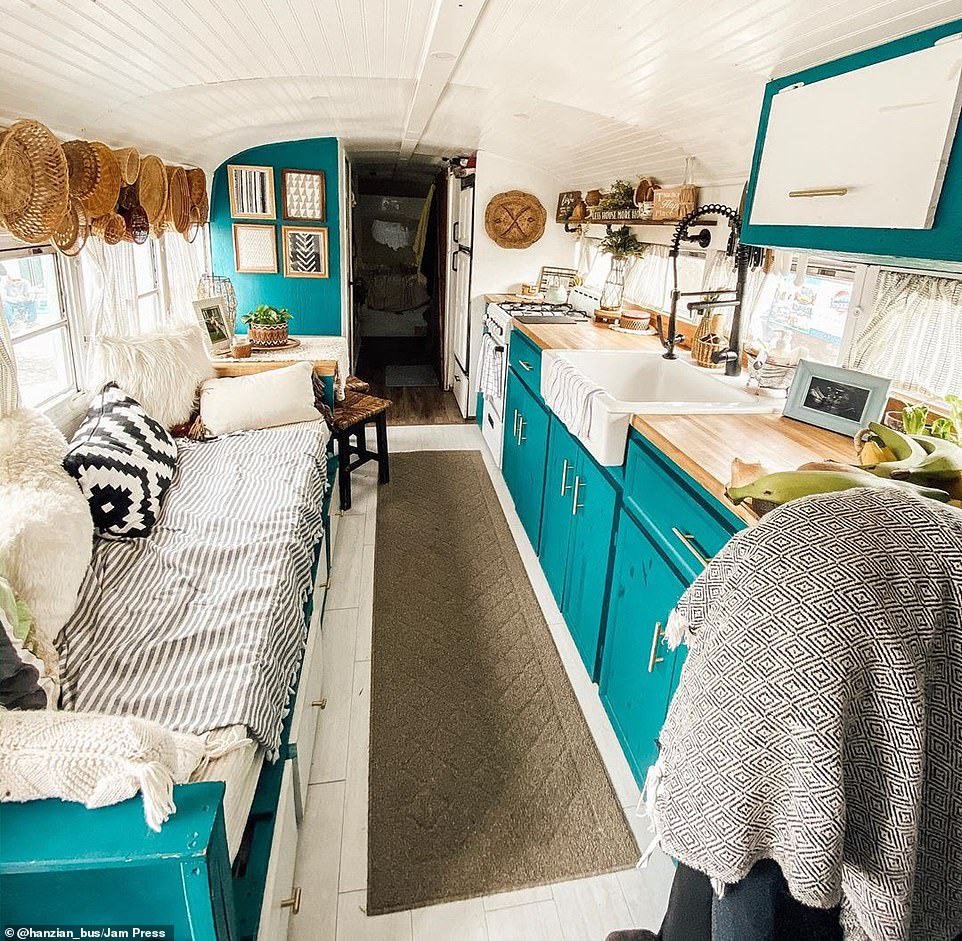 Et voila! What was once a drab and dreary school bus is now a light and airy home that the couple is able to travel around in 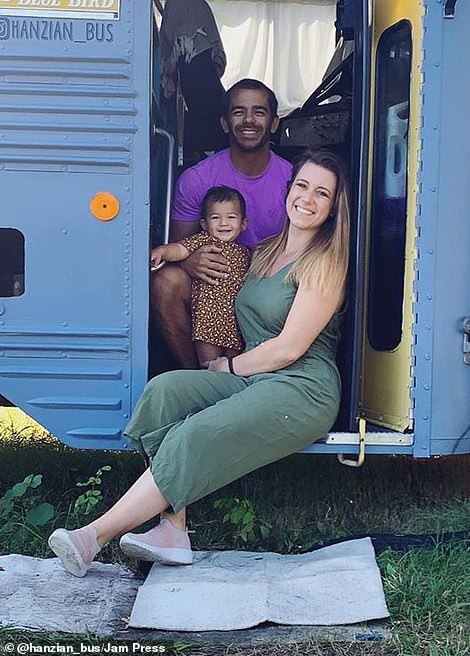 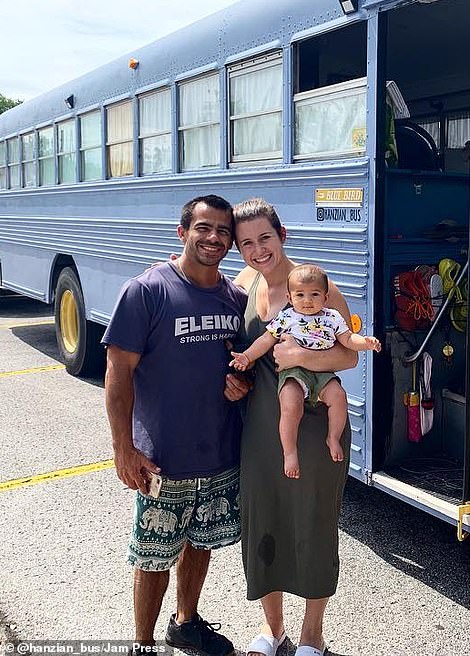 Taking care: Ian and Hannah, pictured with daughter Noah, invested money into ensuring that the mechanics of the bus were up to scratch, noting that they wanted to make sure that everything would be safe before taking their children on board

Following the framing, the pair, who admit they had no prior experience in building, began putting up the walls, installing electric, plumbing, and waterproofing the shower before tiling, painting and installing the AC.

‘After we had everything built in we added the finished flooring. We didn’t want to add that right away because we are messy workers and knew we’d mess it up!’

To make matters even more exciting, Hannah found out in January 2018 that she was pregnant with the couple’s first child – and they rushed to make sure that their home on wheels was renovated to accommodate their newborn baby, who arrived in October of that same year.

Hannah has always paid close attention to detail, so taking the pregnancy off from renovations was not an option. In fact, she worked almost daily on their future tiny home on wheels right up until the 37th week of her pregnancy.

Piece by piece the bus was completed in September 2018, just in time for the arrival of their beautiful daughter, Nora and the three moved on board with their pet dog named Girlie in December 2018.

And installing a crib for their baby girl was not the only adjustment that the couple have made since moving into their bus house.

A year after living on the bus, they installed solar panels, and admit they are consistently updating and modifying their new home. 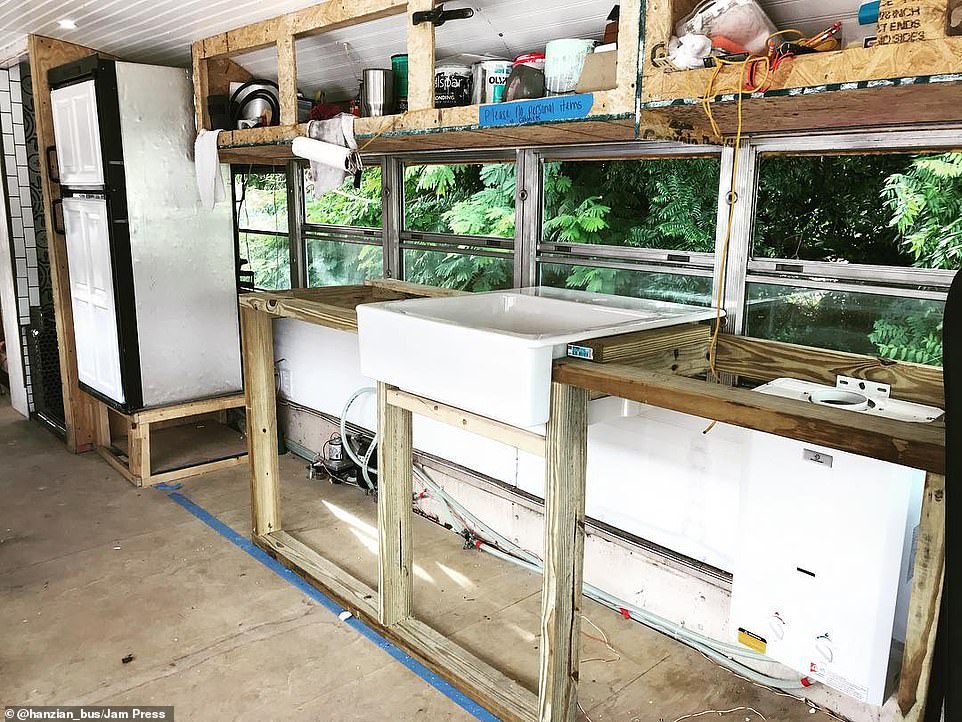 Shell: The project ended up taking longer than they had originally hoped, because they were doing everything themselves 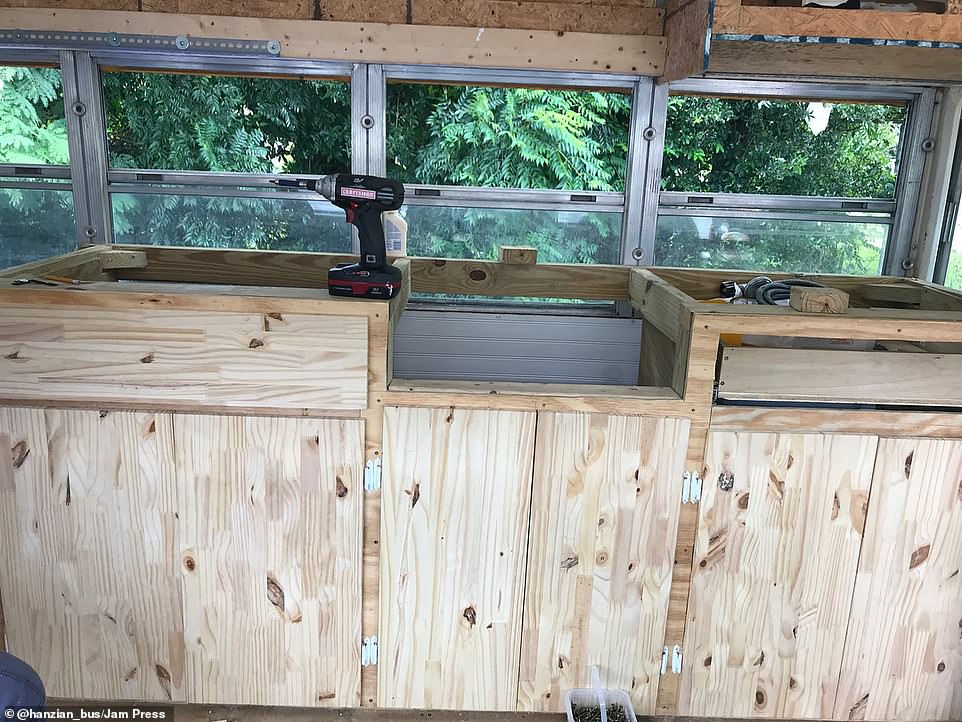 Slow going: ‘Having to rely on certain people and their schedules to help us with projects on the bus was hard. At first, we wanted to complete our bus in a year,’ they explained 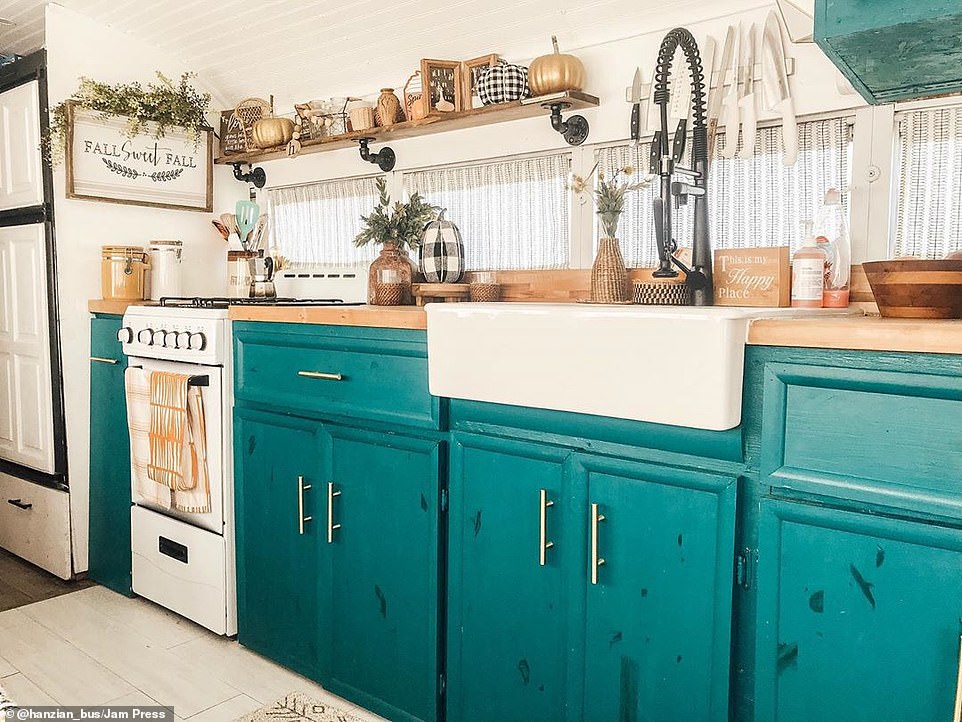 End result: Ian and Hannah say that they are overjoyed with the final product, however they admit that they are constantly making updates to their home 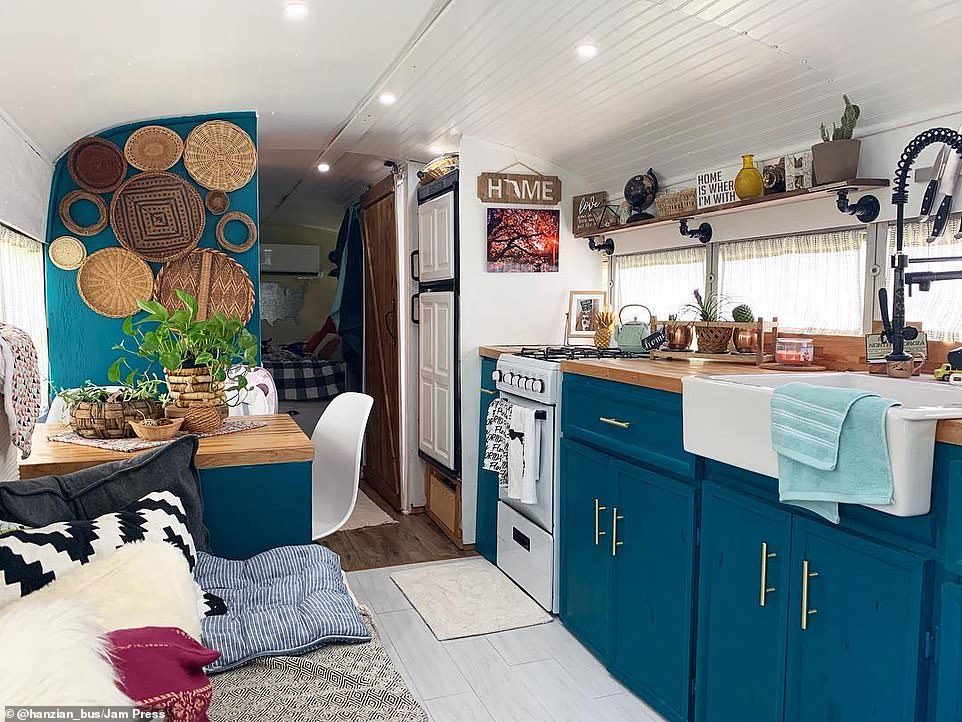 Final step: The couple waited until everything else was fitted before adding in the flooring, because they knew that it would likely get messed up if they added it in beforehand

‘We are currently working on changing our couch and table design to something more fitting for our growing family. We have to fit two high chairs at the table now, so it’s time to tear that space out and rebuild!’ they said.

Ian and Hannah said the most enjoyable part of the transformation was ‘watching the project come to life while learning so much along the way.’

‘At first, it’s hard to see the light at the end of the tunnel,’ they said. ‘We always said the process was two steps forward and five steps back, meaning every time we would progress and get closer to the finish line, we’d have to back track and fix something or redo it.’

‘Every little accomplishment we celebrated. Watching the bus turn into our home over the course of two years was so rewarding.’

Of course, the project came with its difficulties too, as the couple explain, ‘The most challenging part was not having the knowledge or skills at the beginning of the project.’

‘Having to rely on certain people and their schedules to help us with projects on the bus was hard. At first, we wanted to complete our bus in a year.

‘But because we needed help with things, or needed to borrow certain tools from friends when they were available it made our progress slower.’

The pair spent a total of $12,000 renovating the bus, which includes the cost of new tires, the cost of the bus, and everything that was built inside but admit they have probably spent another $2,000 since its completion. 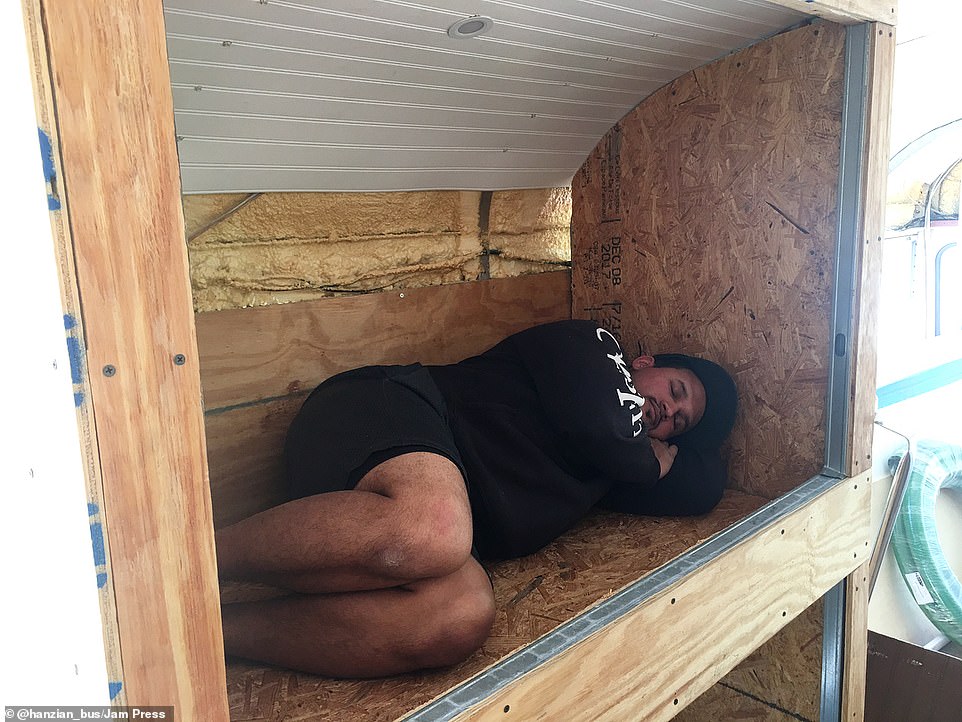 Tiring: It took over a year for the renovations to be completed, with the couple working day and night in order to finish the bus 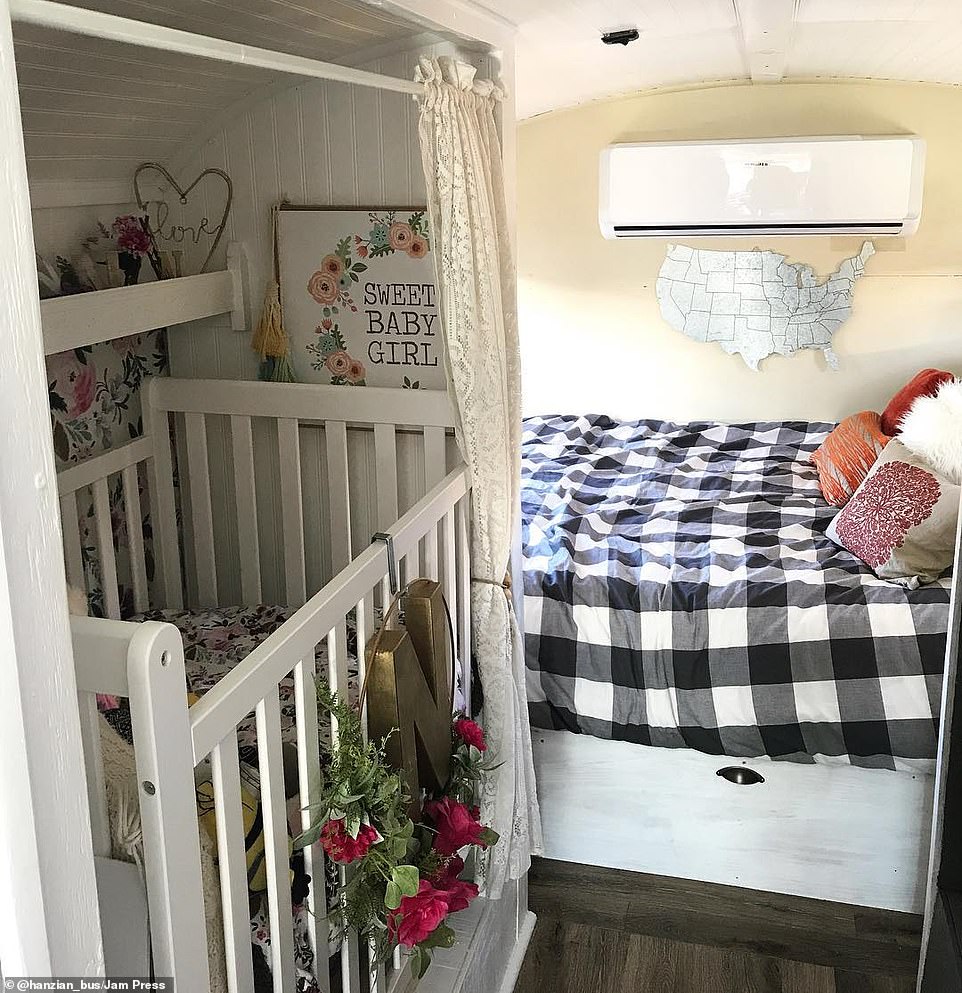 Updates: Hannah found out in January 2018 that she was pregnant with the couple’s first child – and they rushed to make sure that their home on wheels was renovated to accommodate their newborn baby, who was born in October of that year 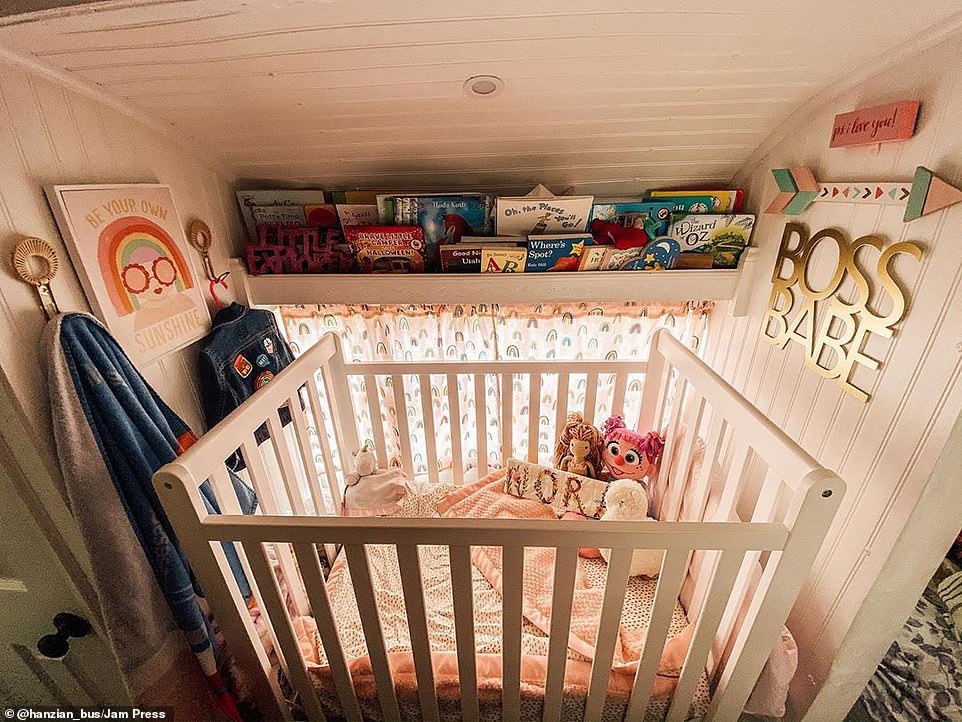 Home sweet bus: The couple moved into the bus full-time with their daughter Nora in December 2018 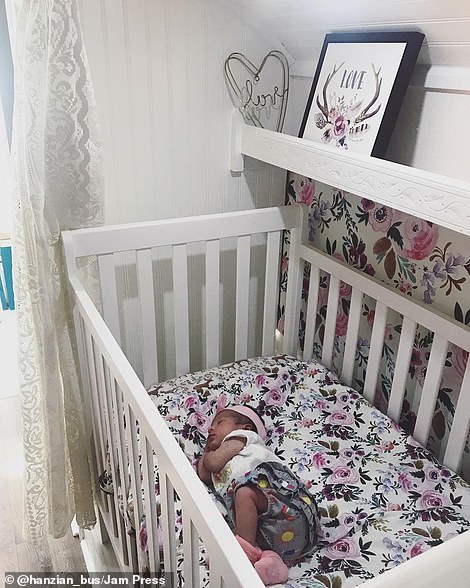 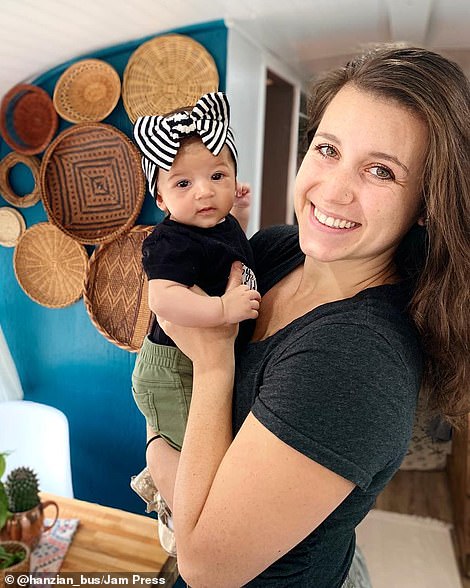 Excitement: They then spent nearly two years living in the bus as as family of three before welcoming their second child, son Atlas, in June 2020 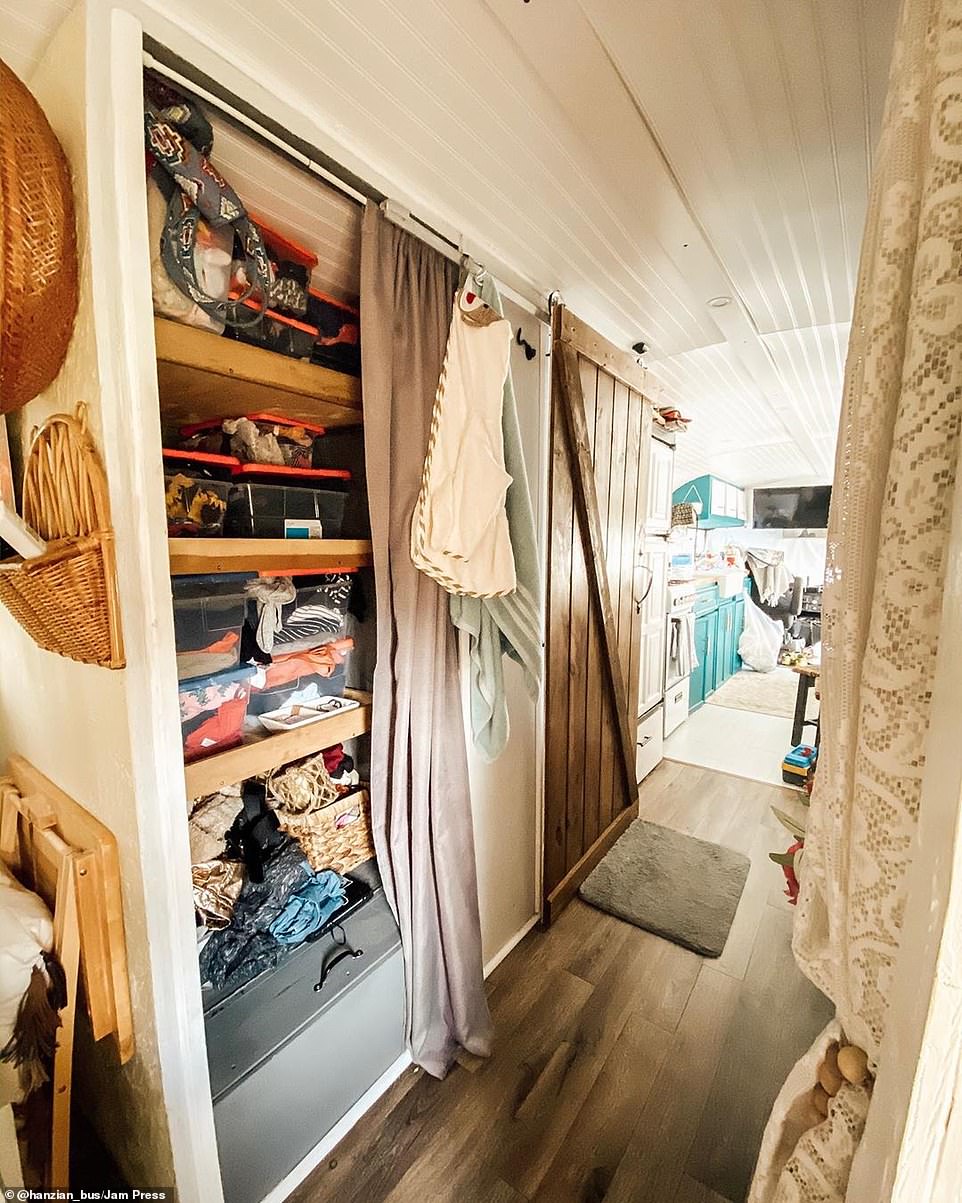 Off they go: The family has now traveled across 14 states in their bus home, and say that they are excited to visit new locations in the future

‘We have also separately from the build, invested in the mechanics of our bus. It was important for us to have a very safe and mechanically sound bus especially with the children riding in it, and it being our home. We wanted to avoid breakdowns and dangerous situations at all cost,’ they added.

And for anyone considering creating their own mobile home, the couple advises that they go for it.

‘It’s a lot of work but it is the most rewarding thing to see our family grow in this little home we made with our own hands.

‘There will always be those people that shut down your idea or think you are crazy for wanting to live in an old vehicle, but if you dwell on the negative comments you will never accomplish your dreams!’

Since moving into their bus full-time in December 2018, the family has traveled across 14 states – and they have plans to visit many more in the future.

Speaking about their travels in an interview last year, the couple shared: ‘The greatest thing about this has been watching Nora see so many new places. She has adapted to all sorts of different environments and situations.

‘Nora does very well with loud noises when we are cooking, cleaning or showering and when we are driving she knows that’s her nap time.

‘Beyond our little one pulling everything out of the cabinets and laying them all over the floor, our only real problem is finding a safe place to park at night and making sure we maintain good climate control inside the bus. This is easily done though as we have AC and a little heater.

‘Our friends and family have been incredibly supportive and helped so much with the build. We are lucky to have many like-minded friends who love travel.’