Crisp packets featuring a caricature of ‘Rhodri the coal miner’ have been axed after complaints the character offends the Welsh.

The Welsh rarebit-flavoured snacks, sold by REAL Crisps, have been delisted amid suggestions that the concept is ‘stereotyping’ and ‘racist.’

The design features an illustration of ‘Rhodri’ staring out of the stark black packet – the miner wearing a headlight with coal smeared across his face. 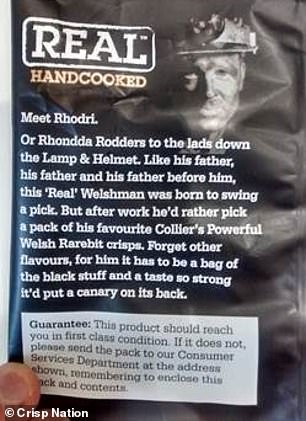 The packets of Welsh rarebit-flavoured snacks, sold by REAL Crisps, have been axed amid suggestions that the concept is cultural appropriation

But the controversy stems from the back of the crisp packet, on which a short description of the coal miner is written.

It said: ‘Meet Rhodri. Or Rhondda Rodders to the lads down the Lamp & Helmet.

‘Like his father, his father and his father before him, this “Real” Welshman was born to swing a pick.

‘But after work he’d rather pick a pack of his favourite Collier’s Powerful Welsh Rarebit crisps.’

The company goes on to describe the snack as having a ‘taste so strong it’d put a canary on its back.’

The crisps, which were launched four years ago, have now been deemed ‘racist’. 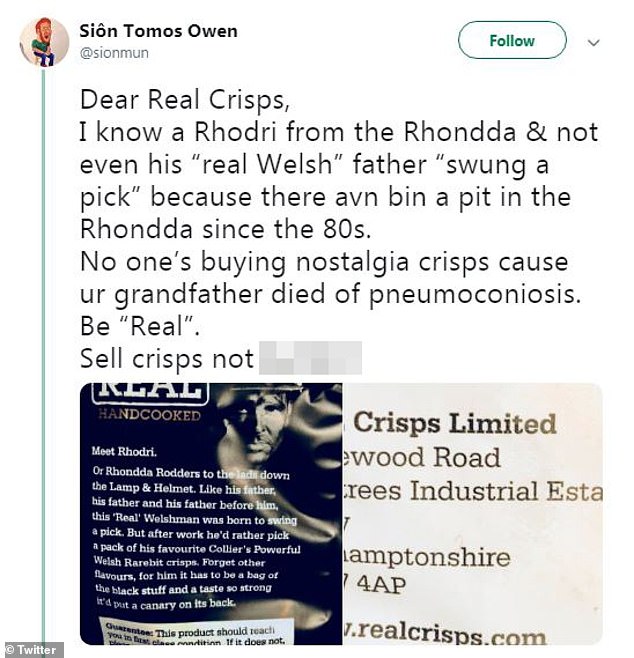 Siôn Tomos Owen pointed out that there hasn’t been a coal mine in Rhondda since the 1980s.

He wrote on Twitter: ‘Dear Real Crisps, I know a Rhodri from the Rhondda & not even his “real Welsh” father “swung a pick” because there avn bin a pit in the Rhondda since the 80s (sic).

‘No one’s buying nostalgia crisps cause your grandfather died of pneumoconiosis.

Director Clare Sturges said: ‘Shoot the copywriter and sack the marketing agency for this offensive, BS rehash of a tired Welsh stereotype.

‘And cull all the other caricatures knocking about the brand. Utter tripe.’

Jean Smith said: ‘Not only stereotyping and racist, but implying you can’t be a real Welshman unless you worked down a pit!!!’

REAL Crisps, owned by parent company Tayto, has since apologised for the product and said it was meant to be ‘tongue-in-cheek,’ the Daily Express reported.

Matthew Smith, the director of marketing, said: ‘We are sorry for any distress that has been caused by the wording.

‘Recent comments pointing out how the story on the packet could be interpreted now seem really obvious but, unfortunately, we didn’t pick this up when we were designing the pack.

‘We have taken the comments on board and would like to apologise wholeheartedly. We have also started delisting the product.’