The Golden State Warriors swept their way to a fifth straight NBA Finals, getting triple-doubles from Stephen Curry and Draymond Green in a 119-117 overtime victory over the Portland Trail Blazers on Monday night.

The Warriors will face the winner of the Eastern Conference finals between Toronto and Milwaukee. The Bucks lead that series 2-1 with Game 4 on Tuesday night in Canada. 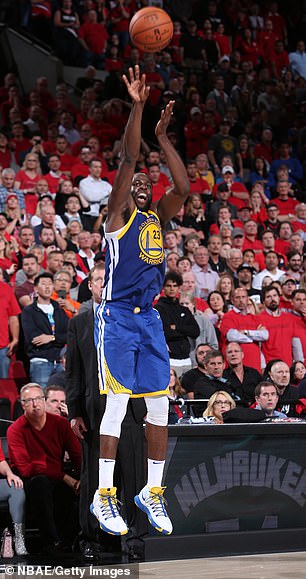 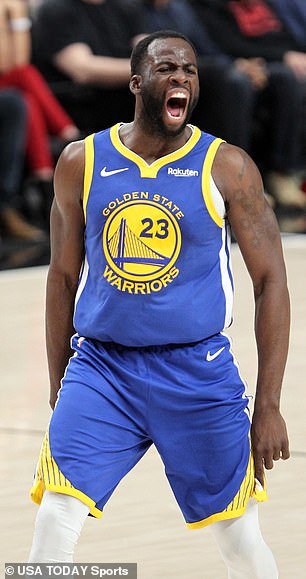 The Warriors erased another big deficit, coming back from 17 down after erasing an 18-point deficit in Game 3 and a 17-point hole in Game 2.

‘We’ve been here before. We’ve seen everything, every experience you can imagine. So we relied on that,’ Curry said.

Playing without Kevin Durant, Andre Iguodala and DeMarcus Cousins, the Warriors became the first team to reach five straight finals since the Boston Celtics went to 10 in a row from 1957-66.

Damian Lillard, playing with separated ribs, had 28 points and 12 assists for Portland. He missed a 3-point attempt as time ran out in the extra period. Meyers Leonard added a career-high 30 points along with 12 rebounds.

The Warriors were up 114-113 in the extra period after Green missed the first of a pair of free throws. CJ McCollum’s jumper from out front briefly gave Portland the lead but Alfonzo McKinnie’s basket put Golden State back ahead and Green made a 3-pointer to push it to 119-115 with 39 seconds left. 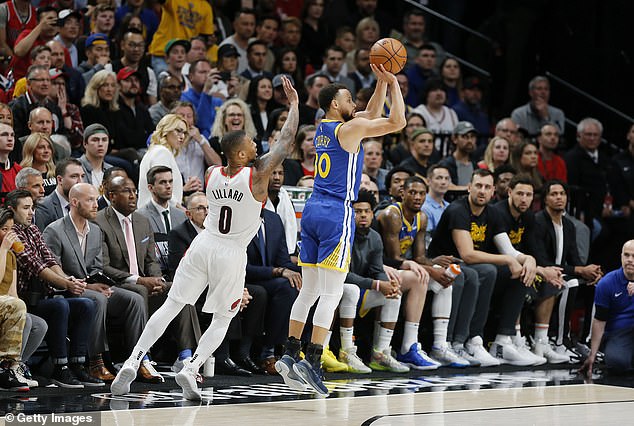 Curry, getting away from Damian Lillard to get his shot off, scored 37 points 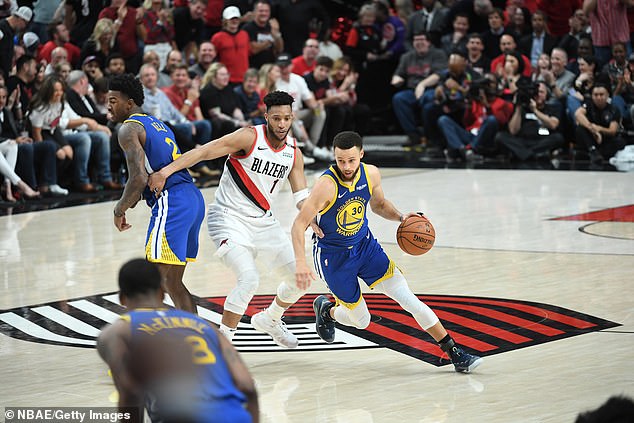 Lillard made a layup and Curry missed a jumper to give Portland back the ball. Facing stifling defense from both Green and Klay Thompson, Lillard couldn’t get off a shot but the ball went out of bounds in the scramble. The Blazers got it back with 3.3 seconds left but Lillard’s final shot didn’t fall.

For the third straight game the Trail Blazers led at the half. They stretched the lead to 17 points in the third quarter, but the Warriors went on a 12-0 run to close within 95-90 early in the final period.

Green’s long baseline jumper gave the Warriors a 108-106 lead with 3:30 left. Lillard’s 3-pointer put the Blazers back ahead and Leonard’s dunk extended it to 111-108 with just under two minutes to go.

After Thompson’s 3-pointer tied it up again both Curry and Lillard missed 3s. Curry made a 3 from the corner with 10.7 seconds left but he was called for travelling first and it didn’t count.

Lillard’s layup bounced around the rim and out and the game went to overtime. 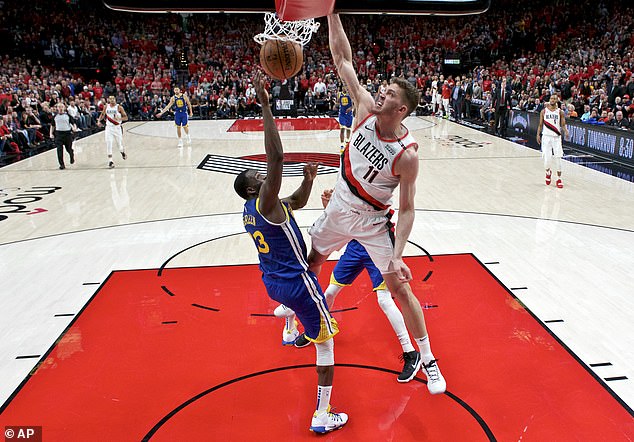 Iguodala was out because of a sore left calf. The veteran swingman, who is averaging 10.1 points in the play-offs, was hurt in the second half of Saturday’s Game 3 victory.

It was not known how long he’d be out, but the Warriors said an MRI Sunday was clear.

Golden State was already missing Durant because of a sore right calf. It’s unknown when the two-time NBA Finals MVP will return.

Lillard separated his ribs in Game 2 but was playing through the pain. He averaged 33 points in the first-round play-off series against Oklahoma City, hitting a series-clinching 3-pointer in Game 5, but he struggled against Golden State’s defensive focus on him. 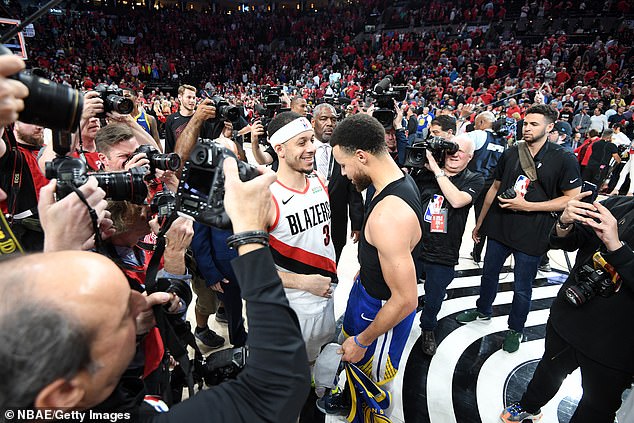 Portland, playing with urgency in an elimination game, pulled in front 30-28 in the opening quarter on McCollum’s layup and free throw, but Curry answered on the other end with a step-back 3-pointer.

Portland went ahead 59-50 after back-to-back 3-pointers from Leonard, who finished with five 3s in the first half.

Curry hit a 3-pointer with 2.6 seconds left in the half to close the Warriors within 69-65 at the break.

Portland pushed the lead to 83-72 on McCollum’s 3-pointer. After he made another 3 to push the lead to 91-78, he gestured to the crowd to make noise.

Warriors: Curry has made a 3-pointer in a play-off-record 106 games. Quarterback Colin Kaepernick was among the fans at the game, sitting a few seats down from the Warriors bench. Per Elias Sports and the Warriors, Curry had a streak of 81 consecutive free throws made in the fourth quarter and overtime in the postseason – before he missed one with 9:25 left in the game against the Blazers.

Trail Blazers: Leonard, who didn’t even play in five of Portland’s postseason games, had a play-off-high 16 points in Game 3. After scoring 25 in the first half, fans at the Moda Center chanted his name.

Former Oregon wide receiver Keanon Lowe got a standing ovation when he was introduced to the crowd at the Moda Center in the first quarter. Lowe, a coach at Portland’s Parkrose High School, stopped a student who came to the school armed with a shotgun on Friday.

‘I saw the look on his face, the look in his eyes, I looked at the gun, I realised it was a real gun and then my instincts just took over,’ Lowe, 27, said about wrestling the gun away from the teenager. Lowe spoke to reporters before the game.