Damian Hurley broke his silence on Instagram on Tuesday following the death of his father, Steve Bing, aged 55, the day before.

Sharing a picture of a beautiful sunset, he wrote that this was ‘strange and confusing time’ for him but thanked people for their kindness and well-wishes.

The 18-year-old wrote: ‘Thank you from the bottom of my heart to everyone that has reached out following the devastating news.

‘This is a very strange and confusing time’: Damian Hurley, 18, broke his silence on Instagram on Tuesday following the ‘devastating news’ of his father Steve Bing’s suicide 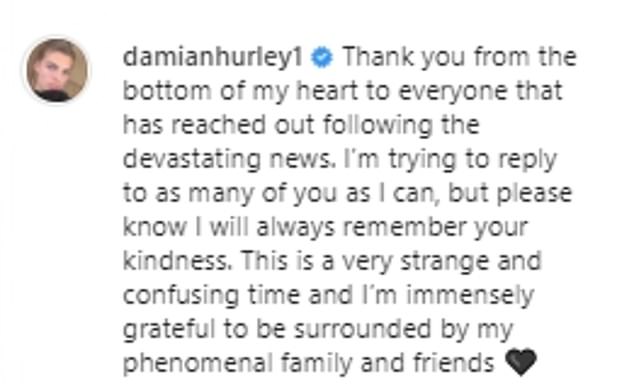 ‘I’m immensely grateful’: As well as the picture of the sunset, he shared these sweet words as he thanked others for their kindness

‘I’m trying to reply to as many of you as I can, but please know I will always remember your kindness.

‘This is a very strange and confusing time and I’m immensely grateful to be surrounded by my phenomenal family and friends.’

Millionaire filmmaker and philanthropist jumped to his death from the 27th floor of his apartment building in the Century City neighborhood of Los Angeles after becoming depressed due to a lack of social contact during lockdown. 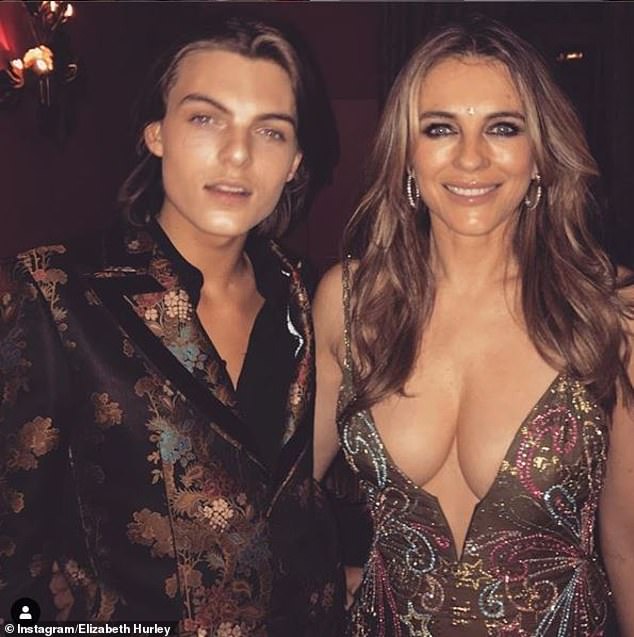 Family: Damian pictured with his mother, Elizabeth, who dated Steve in the early 2000s for around 18 months 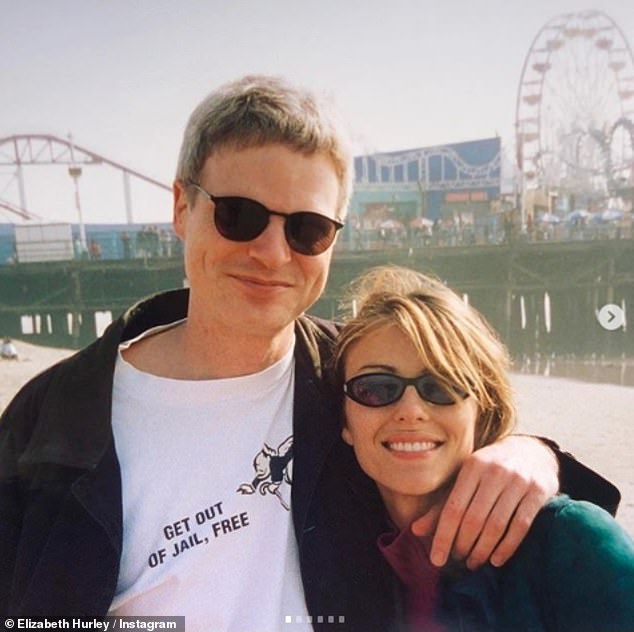 Love: Elizabeth shared Instagram snaps from romantic holidays with Steve a day after his suicide and admitted ‘we had become close again’ 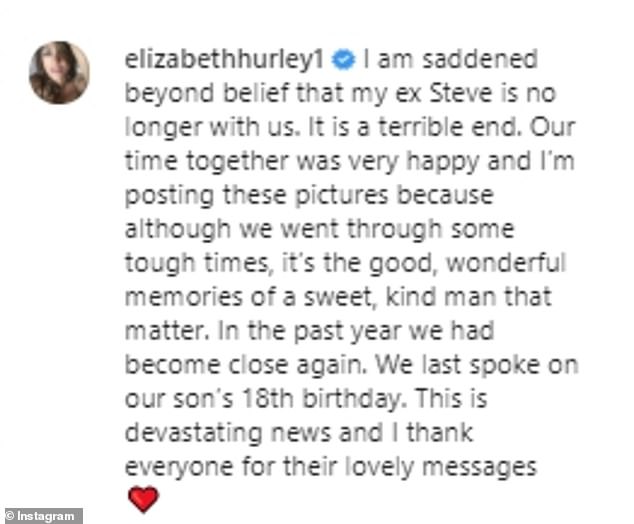 ‘I am saddened beyond belief’: She wrote these touching words along the pictures

While it had been reported that Steve had never met his son, Damian’s mother Elizabeth Hurley also took to social media to say they had grown close.

On Monday, Damian shared a picture of a beautiful blue sky taken through the trees on Instagram Stories.

It is not clear whether he was aware of the news when he shared the image from his mother Elizabeth Hurley’s Herefordshire countryside home at approximately 4pm UK time. 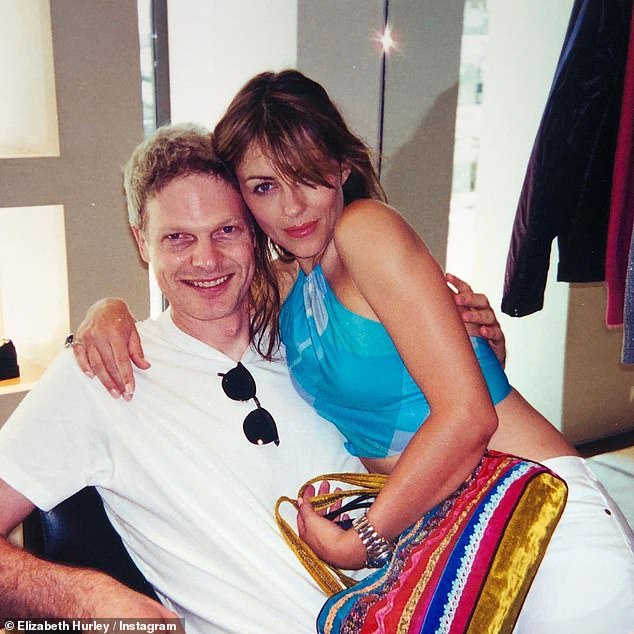 Happy times: In the throwback photos, taken during their two-year romance, Elizabeth and Steve appeared loved up and went on many adventures together 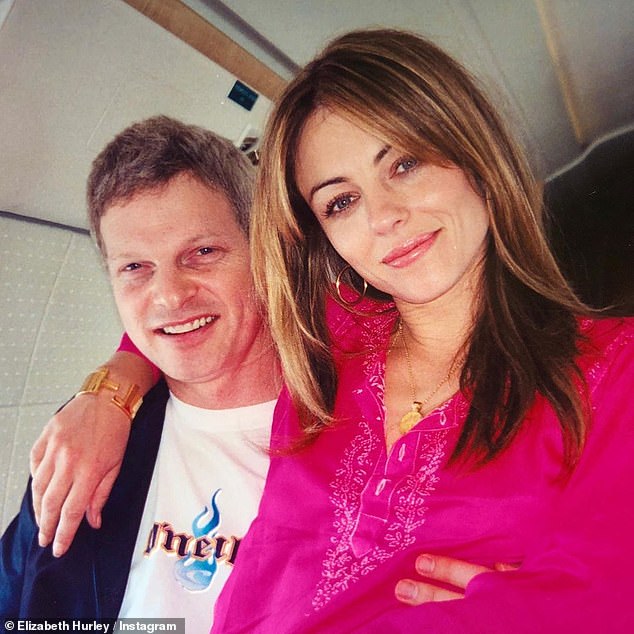 Memories: Elizabeth shared a snap from a trip on a private jet together

Damian was born after an 18-month relationship between the entrepreneur and the actress, 55, in the early 2000s and was the subject of an inheritance row with Steve’s father Peter, which he won last year.

Bing, whose career in film producing began when he dropped out of Stanford aged 18 after inheriting $600m from his real estate tycoon grandfather, took his own life.

Elizabeth met Bing in 2000, while she was ending her 13-year relationship with Hugh Grant.

The couple, whose relationship remained non-exclusive, separated briefly in March 2001. 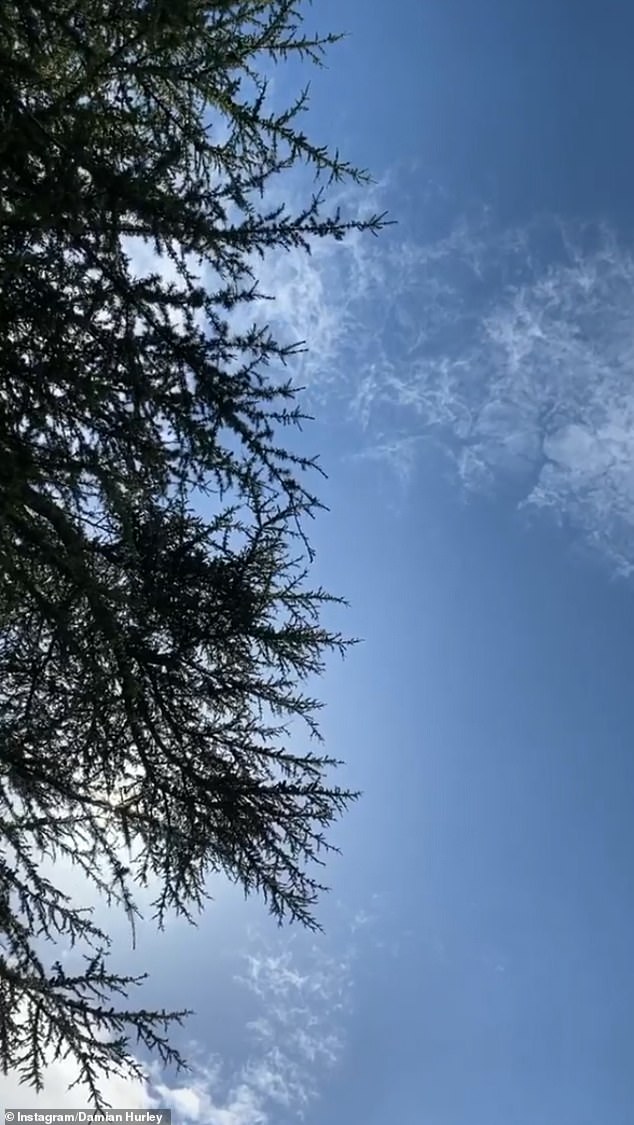 Poignant: Damian had shared a picture of a beautiful blue sky taken through the trees on Instagram Stories on Monday evening, but it’s not known if he knew of the sad news then

They reportedly reconnected soon after, and in August visited Elton John’s holiday home in Nice.

Elizabeth informed Bing after they separated that he was the father of her child.

He issued a news release saying that they had not been in an exclusive relationship and that it was ‘her choice to be a single mother.’

Tabloids in Britain variously labeled him ‘Bing Laden’ and a ‘spermicidal maniac.’ 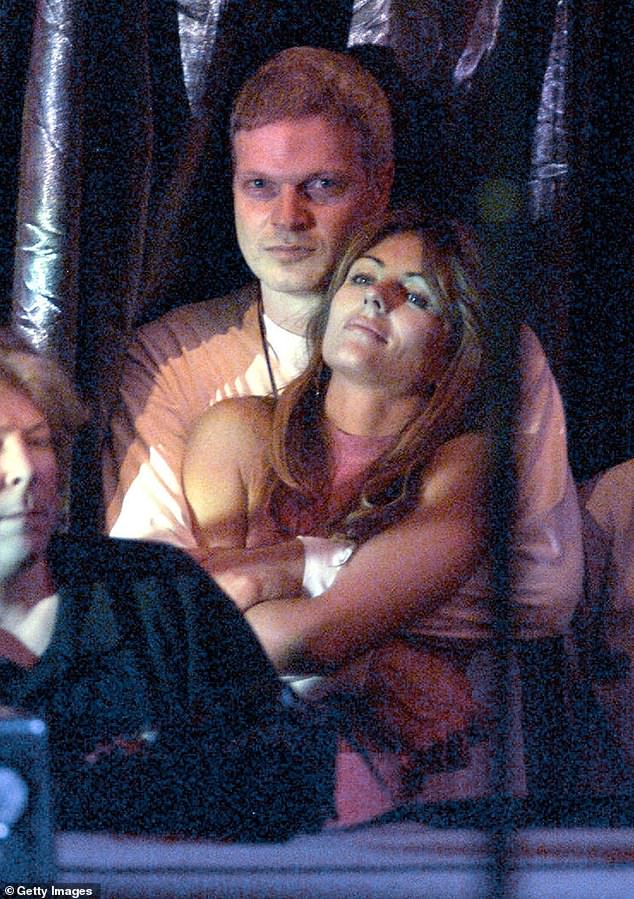 Bing initially disputed Hurley’s claim he was the father but later a DNA test proved otherwise.

In the same year that Damian was born, 2001, Bing was faced with a paternity suit from a second woman, professional tennis player Lisa Bonder.

Bonder, who in 1984 was ranked 9th in the world in singles, was involved in a high-profile child support lawsuit with her ex-husband of 28 days, billionaire Kirk Kerkorian.

Kerkorian, 48 years older than Bonder, suspected that Bing – Bonder’s ex boyfriend – was the father of her daughter. 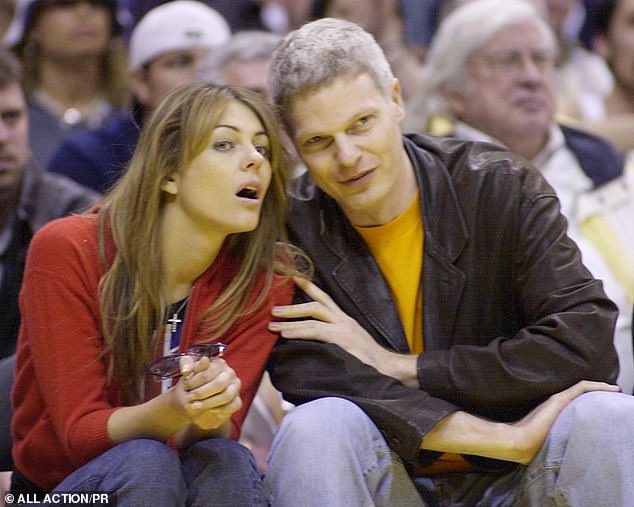 Past love: Elizabeth Hurley pictured with Steve in Los Angeles in 2001

Kerkorian hired infamous private eye Anthony Pellicano to investigate, and Pellicano used dental floss from Bing’s rubbish to do a DNA test confirming he was indeed the father.

Dr Peter Bing, Damian’s grandfather, attempted in 2018 to cut his ‘born out of wedlock’ grandson from a sizeable inheritance from his will.

Peter, who donated $50 million to Stanford University in 2006, established his trust in 1980 to ‘benefit [his] future grandchildren’, who were born or adopted at a young age by Steve or his daughter Mary, according to court papers.

The trust states children who were born out of wedlock and who didn’t live in their parent’s home for a significant amount of time as a minor, would not be considered as beneficiaries. 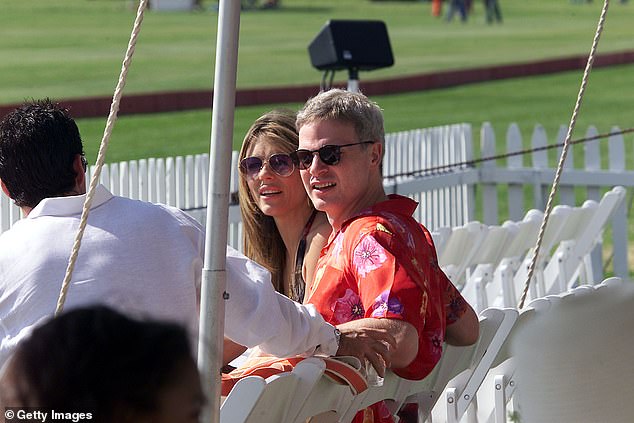 Former relationship: Bing and Hurley pictured at the polo in the Hamptons in 2001, during their on-off romance

The elder Bing also stated that Damian would not be considered as a beneficiary either because he was born out of wedlock and not only never lived with his film producer father but ‘never met’ him.

Steve contested this and in July 2019, he won his legal fight and an LA judge ruled that Damian and his half-sister Kira Kerkorian were indeed beneficiaries to the trust.

Steve had earlier accused his father Peter of ‘coordinating’ with his sister Mary, 53, to ‘orchestrate a massive money-grab to deprive’ Kira and Damian of their rightful inheritance and ‘thereby increasing – perhaps even doubling – her own children’s share of the available fund,’ court papers stated.

The businessman had even wanted Mary punished for allegedly trying to screw his children out of the trust, asking a judge to ‘penalise’ Mary for allegedly violating a stipulation of the trust in her attempts to secure more money for her two children, Lucy and Anton, aged 19 and 16, whom she shares with her ex husband Doug Ellis.

If had been enforced, the penalty would have cost her children their entire inheritance. 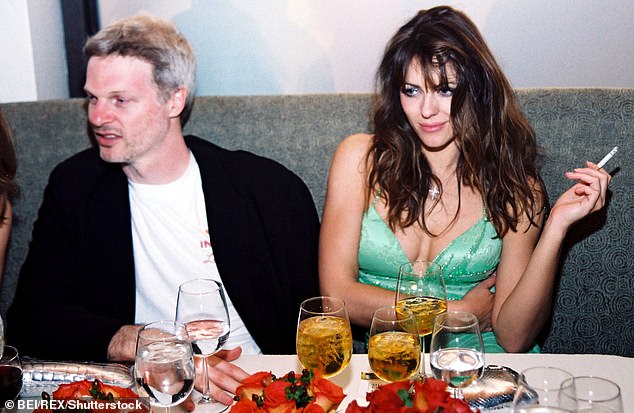 Meanwhile, former president Bill Clinton, a friend of Bing, led tributes to him, saying: ‘I loved Steve Bing very much.

‘He had a big heart, and he was willing to do anything he could for the people and causes he believed in. I will miss him and his enthusiasm more than I can say, and I hope he’s finally found peace.’

Bing was a well-known donor to liberal causes, having signed up to the Bill Gates and Warren Buffett ‘Giving Pledge’ to give away the majority of his wealth in his lifetime.

He is thought to have donated money to Clinton, and was reportedly instrumental in helping him get two reporters sent back to the US from North Korea in 2009.

Bing’s fortune came from his grandfather Leo, who built luxury apartment houses in New York in the 1920s.

His father worked on public health issues for the Johnson White House before relocating to Los Angeles, where he attends to the family business.

The family has appeared on the Forbes list of the 400 richest Americans. 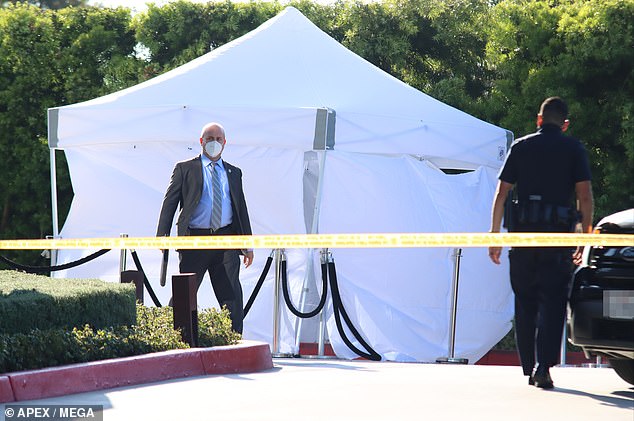 Sad news: Police outside the building where Steve lived. He is believed to have jumped to his death 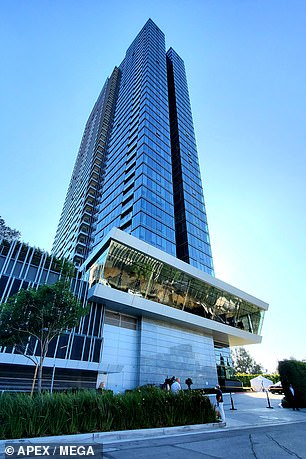 His home: The Century City building where Bing lived

California is dotted with evidence of the family’s generosity, from the Los Angeles County Museum of Art’s Leo S. Bing Theater to an array of programs at Stanford University, where Peter Bing used to be chairman of the board of trustees.

Despite his huge inheritance, Bing was not well known to the general public until his relationship with Hurley.

Before he finished high school at the Harvard-Westlake School, Bing had already co-written his first screenplay, Missing in Action, with veteran sitcom writer Arthur Silver.

It was made into a Chuck Norris film and spawned a sequel.

He inherited his fortune on his 18th birthday, and dropped out of Stanford in his junior year to pursue filmmaking.

In the early 1990s he reportedly checked into the Hotel Bel-Air for one night, and then stayed there for nine years.

Bing maintained a low profile, but was forced into the spotlight by his 2000-2001 relationship with Hurley and a subsequent paternity suit, which enrapt the tabloids on both sides of the Atlantic and led him to file numerous libel and invasion of privacy suits.

In 2002 the Los Angeles Times wrote that ‘the press-shy 37-year-old scion is fast acquiring a Gatsby-esque allure and notoriety.’

The paper reported: ‘Now unmistakably on the map as a high-profile Hollywood libertine, he is a man dedicated apparently in equal measures to philanthropy, politics and women.’

Friends of Bing said that the 6’4′ producer was famed for his easy-going sense of fun and his intellect.

He drove around town in a 1997 Lincoln, wearing jeans and scruffy T-shirts or Hawaiian shirts, and giving no hint of his wealth.

‘He’s a fan of strip clubs, has been a high roller in Las Vegas for years, and yet he can discuss the dense Robert Caro biography of Lyndon Johnson,’ the paper claimed.

He was said to count Warren Beatty, James Caan, Hugh Hefner and Mick Jagger among his friends.

As an investor, Bing was integral in bringing Tom Hanks’ Polar Express to life, contributing $100 million to the computer animated feature.

In April 2012, Bing joined the Giving Pledge – a program established by Bill Gates and Warren Buffett to commit multi-millionaires and billionaires to donate most of their wealth to charity during their lifetimes.

His philanthropy was less well known, but impressive.

In 2002 Bing was the largest donor to the Natural Resources Defense Council, contributing $10 million.

He had contributed $3.5 million to support and defend the 1998 initiative that imposed a 50-cent-per-pack tax on cigarettes to fund child-care and anti-tobacco programs for preschoolers, and was generous to Democratic candidates.

On the night of the 2000 general election, Bing immediately committed $200,000 to the recount effort. 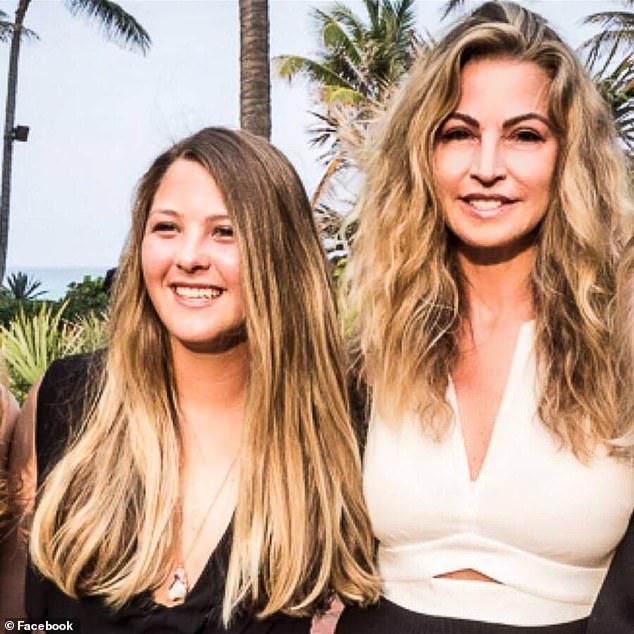 Father: Bing’s daughter is Kira Kerkorian (left) – who was born following his affair with tennis player Lisa Bonder (right), who at the time was married to billionaire Kirk Kerkorian. He hired a private detective to prove Lisa was not his child