David Walliams has said he was relieved to learn he didn’t have any ‘horrible’ ancestors while filming Who Do You Think You Are?

The comedian-turned-children’s author compared his experience to that of fellow TV star Jack Whitehall, who appeared on the BBC series last year.

‘I’m glad there weren’t any “baddies” in my family, because I remember Jack Whitehall found out his ancestors were all horrible,’ David has said ahead of the episode’s broadcast next week.

Blast from the past: David Walliams has said he was relieved to learn he didn’t have any ‘horrible’ ancestors while filming Who Do You Think You Are?

‘Fortunately, I didn’t have a story like that so I was relieved!’

David did discover, however, that his father’s grandfather, who fought in WW1, was very badly shell-shocked and spent the rest of his life in a Mental Health Hospital

He explained: ‘He lived for a long time, so he was in a Mental Health Hospital for over 40 years, up until the 1960s.

‘It’s just a very sad story. Although I think he was very well cared for later in life, it’s not something you would wish on anybody. I’m sure that there were many other men who had the same experience. 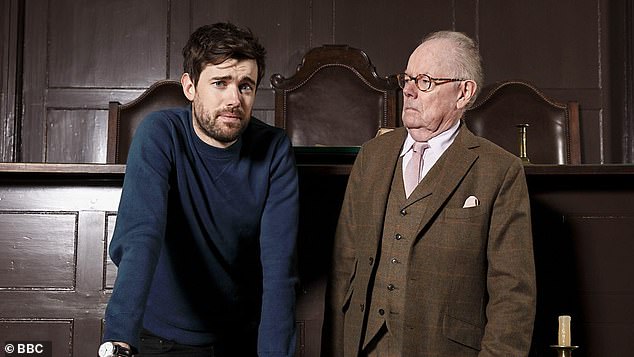 Horrible histories? The comedian-turned-children’s author compared his experience to that of fellow TV star Jack Whitehall, who appeared on the BBC series last year [pictured on the show with his father Michael]

‘Those signing up to fight in France in 1914 did not know what hell was awaiting them there. Even if you were lucky to get out alive, it was very likely that you’d be affected for the rest of your life by the trauma of being in these terrible battles.

‘He lived with it for the rest of his life. I had a few postcards that he painted, whilst he was in the Mental Health Hospital and I always treasured those, because they were so delicate and beautiful. It was just a very moving human story.’

David even visited the trenches to truly get close to his relative.

‘I’d never been in a trench before. You don’t hear anything good about WW1. With WW2 there’s loads of exciting movies – I’m sure it was hellish too, but it just feels like it was a different type of experience,’ he mused. 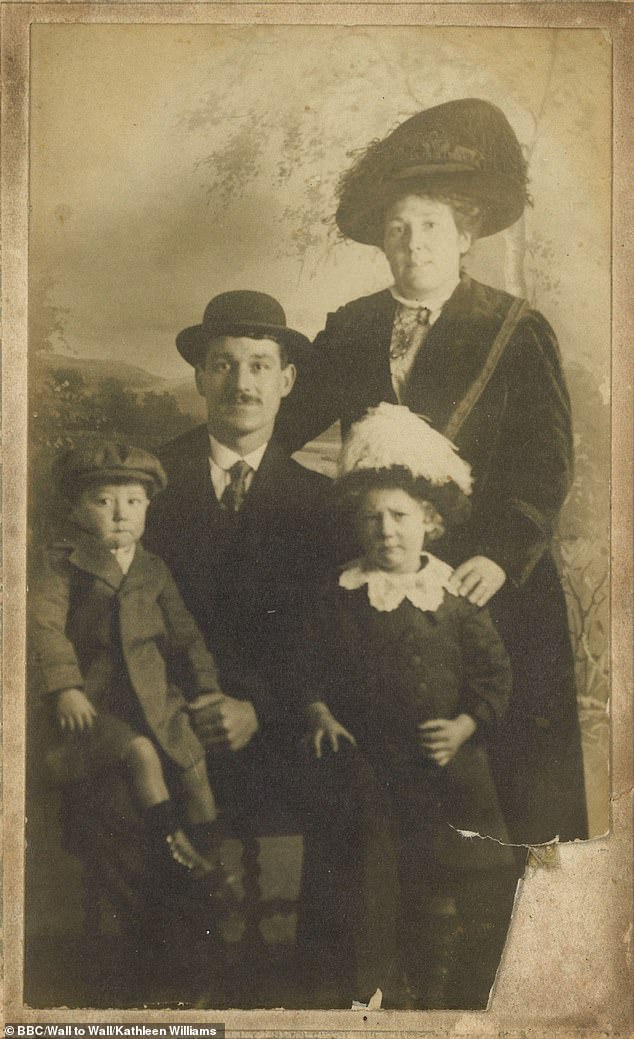 Relief: ‘I’m glad there weren’t any “baddies” in my family, because I remember Jack Whitehall found out his ancestors were all horrible,’ David has said ahead of the episode’s broadcast next week [pictured are his great-relatives from his mother’s side]

‘WW2 is constantly revisited as entertainment, whereas WW1 just seems like misery, and so being in a trench gave me a sense of having to live in what was basically an enormous sewer.

‘The day we went, it was pouring with rain, so I got some sense of the quagmire, and as much as you’re trying to fight, you’re also just trying to survive and get through the day.’

David also learned that his great-great-grandfather was a traveling showman.

‘My grandmother on my mother’s side – her grandfather was a colourful figure. He was blind and had many jobs, and he ended up being a showman – which means running a fair,’ David continued.

‘My grandmother had never told me about him, because she was embarrassed that she thought her upbringings were humble. These are not my feelings about this, those were my grandmother’s. So, she never spoke about him.’ 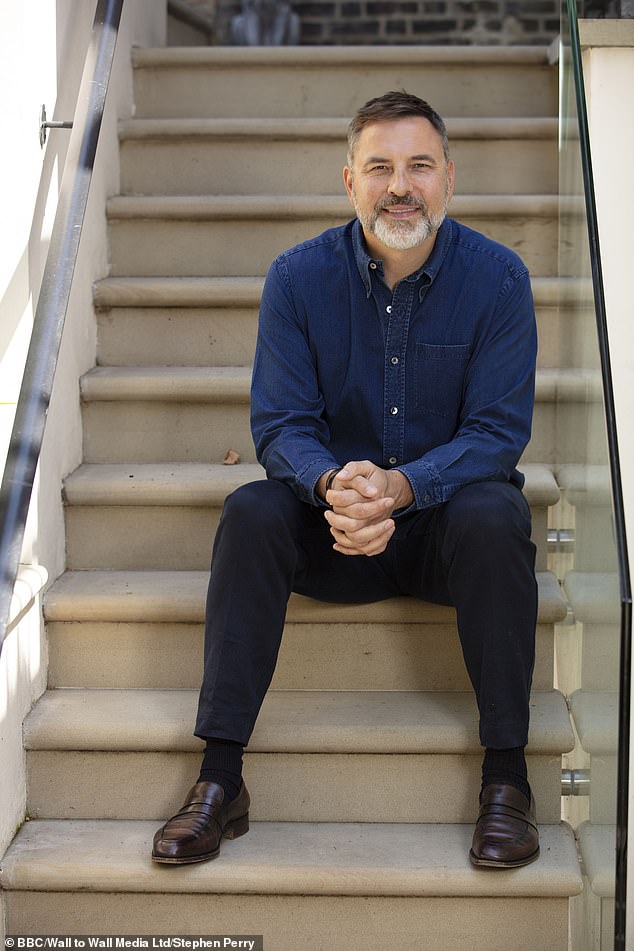 Runs in the family: David learned that his great-great-grandfather was a traveling showman 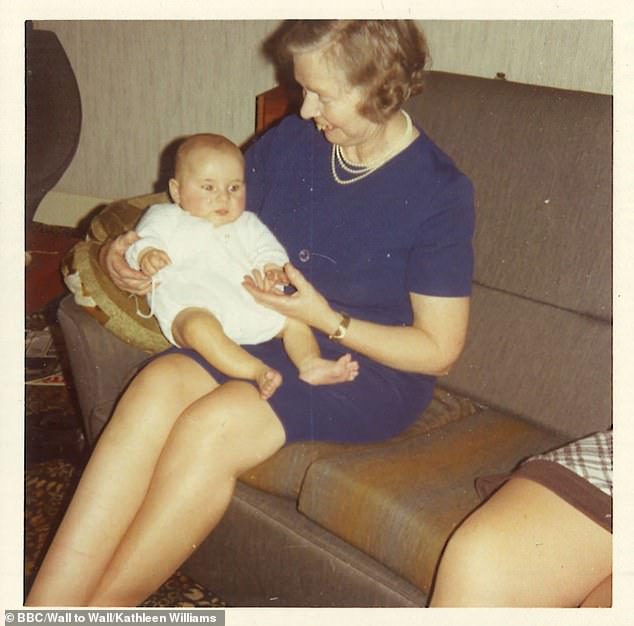 Family: David is pictured as a baby with his paternal grandmother, Granny Ivy

David went on to compare this relative to himself, and how entertaining was clearly in his blood.

‘I was glad that there was some link, because obviously you are often thinking about what shaped you, why did you get drawn to certain things – being on stage, or trying to make people laugh, or writing stories. Whatever it is,’ David reflected.

‘The fact that he was quite a flamboyant character and was a performer of sorts – I mean, he had an organ and a monkey and he used to play his organ on the streets, and the monkey would have a little hat and collect money.

‘That is what his job was, so not quite the same as me, but he did something to entertain people. 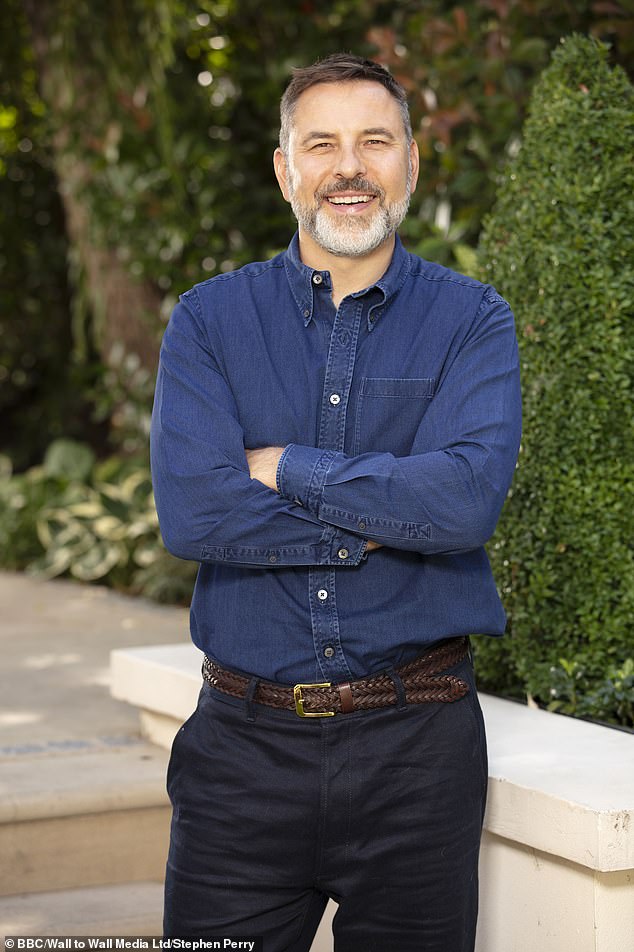 The apple doesn’t fall far: David went on to say how entertaining was clearly in his blood

‘He seemed to be eternally optimistic – he was just winding up the organ, but said on a form he was a professional musician, which makes you think he might have played the violin in an orchestra!

‘And to become part of the travelling community – and become a showman, that’s quite something, because it’s a closed world as it’s passed on from generation to generation.’

Of learning about these two men, David said: ‘They were both very different stories, but their characters really shone through and I found both stories really engrossing.’

David Walliams’ episode of Who Do You Think You Are? airs at 9PM on Monday 19 October on BBC One.