Doctors are calling for heroin, cocaine and cannabis to be made LEGAL

Doctors are calling for heroin, cocaine and cannabis to be legalised.

The Royal College of Physicians (RCP), which represents 26,000 medics in the UK, said it: ‘strongly supports the view that drug addiction must be considered a health issue first and foremost.’

Rather than being punished, the RCP believes drug users should be offered support and ‘timely’ treatment.

The death rate from illegal drug overdoses in the UK has more than doubled in the past decade, with over two in three people not knowing where to get help if they were battling an addiction, according to the report ‘Taking a New Line on Drugs’.

The RCP said: ‘These figures demonstrate a clear need for physical, psychological and social support and care for people addicted to drugs.’

This comes after analyses suggest heroin and crack users are dying of overdoses in the areas of England where cuts to drug-treatment budgets are greatest.

In a new report, doctors are calling for heroin, cocaine and cannabis to be legalised (stock)

Patients who respond to the horse tranquiliser have greater overall activity levels days after its infusion, a study found.

Depressive episodes are partially characterised by a reduced interest in activities.

Ketamine is a Schedule III drug in the United States and a class B in the UK.

It can legally be prescribed by doctors as a general anesthetic in humans and animals.

All of the study’s participants failed to respond to previous treatments.

They were given a single infusion of ketamine.

The researchers tracked the timing and degree of participants’ activities via wristwatches.

Results further suggest those who do more activities prior to ketamine’s infusion have more favorable outcomes, which suggests doctors can predict patients who will respond to the drug.

Dr John Krystal, editor of the journal Biological Psychiatry, where the study was published, said: ‘It would be nice if daily patterns of activity could be used clinically to identify people who might respond to ketamine and to monitor clinical improvement.’

Previous research suggests ketamine likely eases depression by promoting the growth of new connections between brain cells in the regions associated with mood and emotion.

Jane Dacre, president of the RCP, told The Sun: ‘The criminal justice system is not the place to address the often complex needs of people addicted to drugs.

‘We are committed to ensuring that all people who need to do so are able to access timely and appropriate prevention and care services.’

The report, which was put together by the Royal Society of Public Health but backed by the RCP, still supports illegal drug dealers, suppliers and importers being actively prosecuted.

It also wants the UK’s drug policy to be overseen by the Department of Health, rather than the Home Office.

Past research suggests that over the past four years, councils in 85 per cent of areas that have an above average drug-mortality rate have reduced the amount they spend on drug treatment, The Guardian reported.

The treatment budget in Blackpool, which has consistently been the worst area in England for drug deaths, has more than halved since 2013.

Success in other countries

The report references the Netherlands, which aims to reduce harm to drug users and even tolerates cannabis sales from licensed ‘coffee shops’.

As a result, hard-drug use is lower in Holland than the UK, with treatment programmes also leading to less crime, while legal-cannabis use drives higher tax revenues.

In Canada, supervised drug-injecting facilities have been called ‘life preserving’ by its Supreme Court.

Starting in Vancouver, such facilities have led to a plummet in HIV and hepatitis C rates, according to the report. 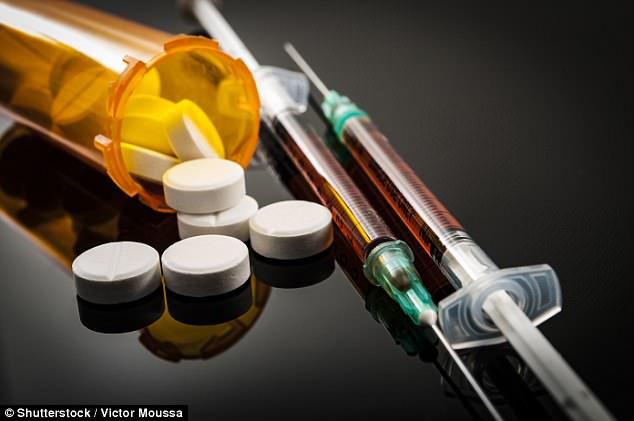 The Royal College of Physicians, which represents 26,000 medics in the UK, said it: ‘supports the view that drug addiction must be considered a health issue first and foremost’ (stock)

Unlike other antidepressants, which change brain-chemical levels and can take months to have an effect, ketamine controls the transmission of electrical signals via nerve cells in rodents, the research adds.

If the drug has the same effect in humans, it could treat the mental-health disorder much faster than currently-available medications, according to the researchers.

Ketamine is a Schedule III drug in the US and a class B in the UK. It can legally be prescribed by doctors as a general anaesthetic in humans and animals.