A dog owner who left his next-door neighbour with a fractured eye socket in a revenge attack for killing his beloved English bull terrier Dave with a samurai sword has been jailed for five years.

The attack on July 15 last year occurred exactly four months to the day that 10-year-old English bull terrier Dave was effectively ‘cut in two’ by Mr Ashurst, a court heard.

The dog, said to have been ‘treated like a baby’ by the Oram family, had been killed by Mr Ashurst on March 15 last year.

He struck it with one blow with the ornamental weapon after it escaped from its home in Gillingham, Kent, and into his neighbouring terraced house.

Mr Ashurst told a court that having been alerted by screams and yelps, he grabbed the steel-bladed katana from his bedroom and struck Dave after finding him in the living room attacking his toy poodle.

He was arrested but when police decided not to charge him in relation to Dave’s death, it was said the Oram family became ‘very upset and very resentful’.

Oram first embarked on a campaign of harassment against his neighbour before carrying out the brutal attack in the street, Maidstone Crown Court in Kent heard.

He later admitted to police that he was angry and frustrated by their decision not to prosecute over his dog’s death and so, having been told by his wife she had seen Mr Ashurst leaving his house, he went after him to ‘give him a slap’.

But although he agreed he lost control and fractured Mr Ashurst’s eye socket, leaving him in need of surgery, he denied that he intended to cause such serious harm. 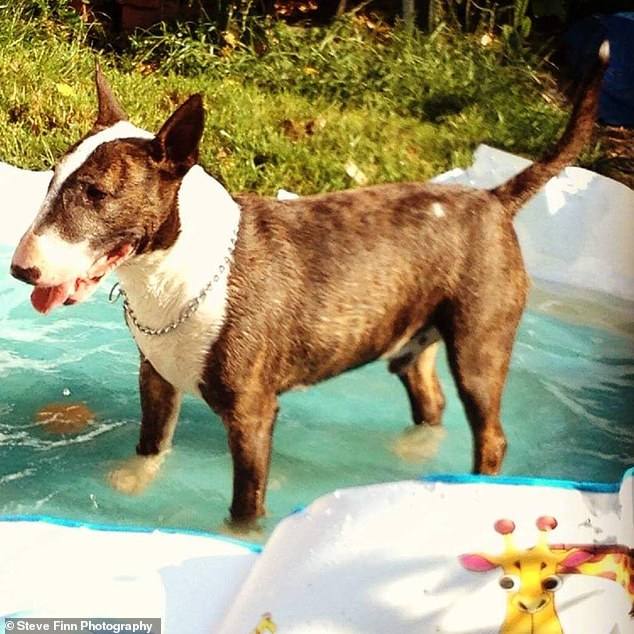 The court heard Oram, his wife Vicky and their two children had given Dave (pictured) a new home in 2012 when his previous owners could no longer keep him due to personal circumstances

The 46-year-old industrial painter and decorator also maintained he had not kicked and stamped on his head.

This included stones being thrown at Mr Ashurst’s bedroom window, verbal and physical threats, spraying water from a hosepipe into his property, smashing a front window with a brick and cutting a telecommunications cable.

The court heard Mr Ashurst, who lived with his mother and 85-year-old grandmother at the house in Castlemaine Avenue, became so scared he installed CCTV cameras to film the front and rear of his neighbour’s home.

Oram, who admitted during his trial that he was ‘disappointed’ with himself, was cleared of the more serious harassment charge of putting a person in fear of violence.

Sentencing had been adjourned after Judge Philip St.John-Stevens told Oram, who suffers from depression and sobbed when he gave evidence about his dog, there was a ‘degree of provocation’.

But he told Oram today that although he accepted he felt ‘aggrieved’ over his dog’s death and that the offences could be viewed ‘in context’, he had subjected Mr Ashurst to a ‘frightening and premeditated’ attack.

‘Your actions and reactions over that period of time cannot be condoned but it must be placed in the context of your mental health at the time, the anxiety and history of depression,’ said Judge St.John-Stevens.

‘That is not excusing it but perhaps explaining why you acted and reacted in the way that you did.

‘I am quite sure now with mature reflection you do regret and have remorse, not only for your actions and your position but more importantly and more significantly towards your victim.

‘But you appreciate the seriousness of causing an injury with such intent. It must be a term of custody.’

Oram waved and blew kisses to his family sitting in the public gallery. He will serve half his sentence less 241 days spent on tagged curfew.

The court heard Oram, his wife Vicky and their two children had given Dave a new home in 2012 when his previous owners could no longer keep him due to personal circumstances.

The court heard Oram’s father was also called Dave and, having recently died at the time, the family saw it as ‘a sign’.

They already owned another bull terrier called Lola and Oram told the jury they all treated Dave ‘like a baby’.

Prosecutor Tony Prosser said the harassment began within hours of Mr Ashurst being released by police without charge over the animal’s death.

‘The Crown say the Oram family, whose pet dog had been killed by Adam Ashurst, were clearly very unhappy with the police decision and very resentful towards Adam Ashurst and his family for what he had done in killing their dog,’ said Mr Prosser.

‘They describe a series of unpleasant incidents that followed over the next few months…The Crown say this all amounts to a campaign of harassment…..as a result of the fact he had killed their dog in March.’

Mr Ashurst was then set upon just after 11.30am on July 15. The court heard that he had rarely ventured out after the dog incident, and only usually by taxi.

The court heard Oram, having been informed by his wife that she had seen Mr Ashurst, pulled up in his car with his daughter and got out.

Mr Ashurst told the court he saw Miss Oram standing one to two metres behind her father, who looked like ‘a man on a mission’.

‘He was just coming straight towards me. As soon as he got to me he pushed me with two hands on my chest to the floor,’ he said.

‘I landed on my butt. He started coming towards me, followed by Jade, and I just went into the foetal position and covered myself as best I could. I was just trying to protect my face. I couldn’t see, apart from shoes coming towards me.

‘I just felt kicks to the face, head, stomps on my back. I was just screaming for assistance. It felt like it was not going to stop.’

As well as the fractured eye socket, he was left with a zigzag-patterned imprint on his shoulder from Oram’s trainers.

He admitted when giving evidence that he shoved and punched his neighbour before kicking him to his body, and said when he eventually stopped, his daughter looked to be in ‘absolute shock’.

Asked about the day his dog was killed, Oram said he was driving to work when Jade phoned him to say, having realised Dave had escaped, she banged on Mr Ashurst’s door but he would not let her in.

Oram told her to call police and then he headed back home only to discover the pet, who suffered a large gash to his body, had died before he got there.

Oram sobbed as he told the court of the effect on his family: ‘There was just devastation and silence, just blown away that this happened. Everyone was upset. I was numb.’

James Ross, defending, said Oram was ‘a family man who had let his emotions get the better of him’. But he told the court he maintains he never meant to cause such serious injury to Mr Ashurst.

‘This wasn’t a random attack by a vicious thug. This was someone who in his life had suffered a great deal of pain and suffering from depression and was grieving at the loss of his dog,’ added Mr Ross.

The Ashurst family has since moved home.