Theresa May has vowed to end the postcode lottery in support for those fleeing domestic abuse.

Thousands seeking refuge from abusive and violent relationships could be better protected by a new legal duty for councils to provide secure homes for them and their children.

The Prime Minister was today announcing the new policy to end the variation across the country and bolster protection in the Domestic Abuse Bill, which is being considered by MPs.

‘I’ve always vowed to leave no stone unturned in tackling domestic abuse,’ she said. ‘This abhorrent crime has no place in our country.

‘Today we are ending the postcode lottery by placing on local authorities a legal duty to deliver support, including secure housing, to survivors of domestic abuse and their children.

Whoever you are, wherever you live and whatever the abuse you face, you will have access to the services you need to be safe.’

The Domestic Abuse Bill will introduce the first statutory government definition of domestic abuse to specifically include economic abuse and controlling and manipulative non-physical abuse. 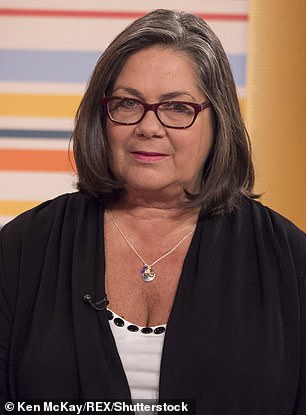 Sandra Horley, of the charity Refuge, welcomed the decision to place a legal duty on councils, which she said ‘could put these life-saving services on a secure financial footing for the first time’

It will establish a Domestic Abuse Commissioner and will also prohibit the cross-examination of victims by their abusers in family courts.

Sandra Horley, chief executive of Refuge, welcomed the decision, which she said could secure ‘life-saving services’.

‘Refuge is delighted by the Government’s decision to place a legal duty on local authorities to provide funding for accommodation based support for survivors of domestic abuse,’ she said.

‘This has the potential to end the postcode lottery for refuge places and could put these life-saving services on a secure financial footing for the first time.

Nicki Norman, acting co-chief executive of Women’s Aid, said many of her member services were delivering services on ‘a shoestring budget’, so a move to consistent, dedicated funding is ‘desperately needed’.

She said: ‘Safeguards to ensure that experienced women’s services – including smaller specialist organisations led by and for black and minority ethnic women – are sustainably funded through a new statutory system will be vital.

‘We look forward to working with the government to ensure that this important move to fund refuges is safe, sustainable and delivers the resources that services urgently require to support all women and children fleeing domestic abuse.’

Ministers have launched a consultation to determine how much funding is needed and where it should go by talking to victims and survivors, as well as organisations supporting victims and their children every day.

Suzanne Jacob, chief executive of SafeLives, said she wanted to see the ‘fullest range of support’ to be considered, including sanctuary schemes and specialist community support alongside refuges.

‘No one harmed by domestic abuse should have to leave their home,’ she said.

‘We have long called for victims and their families to have the broadest range of housing options so they can choose to stay where they are and for it to be safe to do so.

‘A new duty, properly funded, would be a welcome step and could help make the case for change at local level.’

‘Councils cannot tackle this crime on their own,’ he said. ‘It requires a range of public services, including the police, to work together.

‘Our ambition must be to reduce the number of victims, with greater investment in early intervention and prevention schemes that helps stop domestic abuse occurring in the first place.’