Donald Trump Jr spent the weekend decompressing at Mar-a-Lago with his kids after his wife filed for divorce on Thursday.

The younger Donald Trump appeared to be trying to distract himself from the end of his 12-year marriage by indulging in one of his favorite past times – sport fishing.

On Saturday, the 40-year-old posted a picture showing off a massive Cobia he reeled in while out on a fishing excursion with his eldest son Donnie.

Later, he posted videos of his kids rough-housing on Mar-a-Lago’s croquet lawn, and his youngest, Chloe, practicing her golf swing in a Mickey Mouse hat. 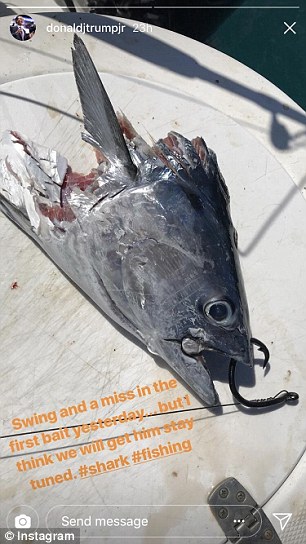 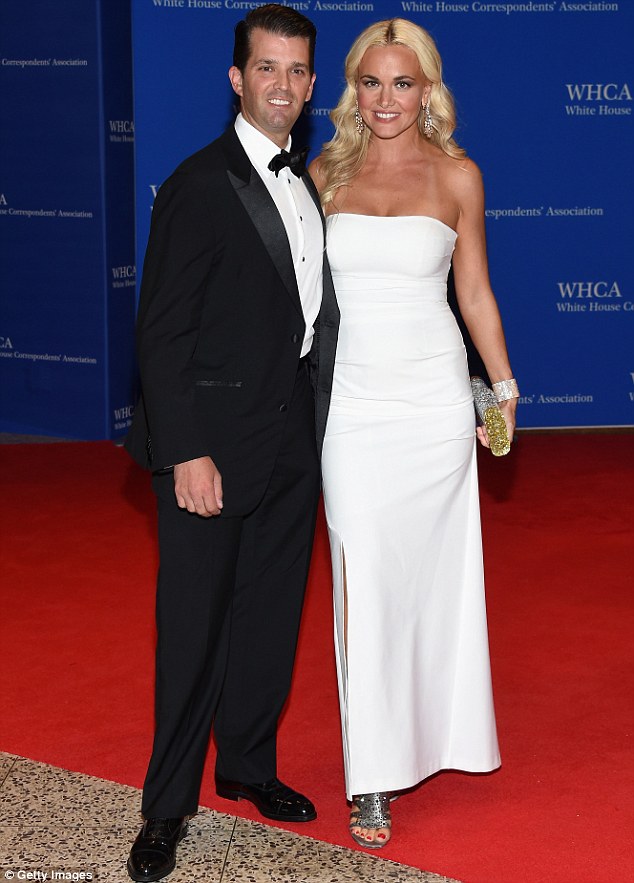 Don Jr’s wife Vanessa filed for divorce on Thursday. The couple have five children together

‘She’s going to be a great player one day…also as cute as it gets,’ the proud dad wrote.

While it will be some time before the divorce is finalized, Don Jr already appears to be getting in shape for singledom.

On Sunday, he posted a sweaty picture after a Cross Fit workout in the grueling Florida heat. 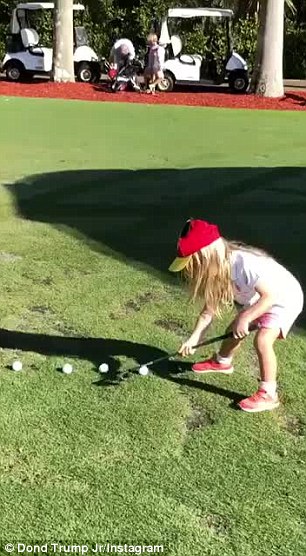 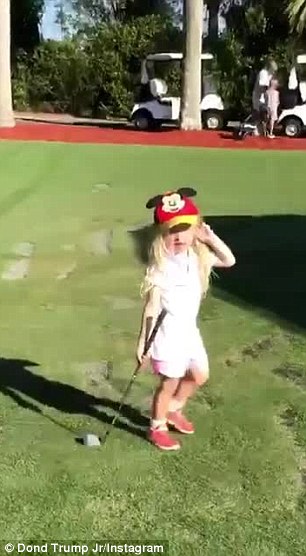 Over the weekend, Don Jr posted this clip of his youngest daughter Chloe practicing her golf swing 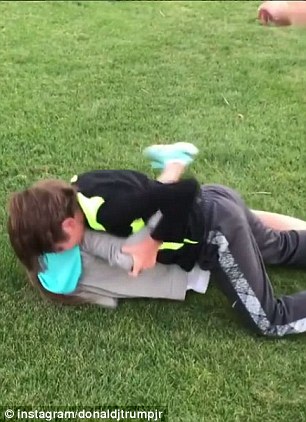 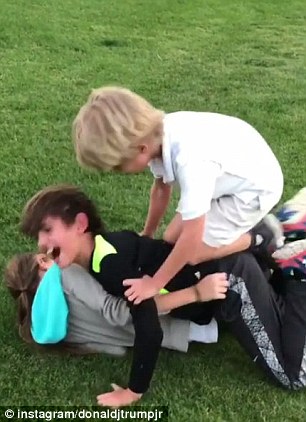 Don Jr, the president’s oldest child, has been spending a lot of time with his children since he and his estranged wife Vanessa announced they were planning to divorce.

On Friday, the president’s son had been in Mar-a-Lago for the Republican Party of Palm Beach County’s Lincoln Day Dinner in Palm Beach, Florida.

But before he went to mingle with the crowd, Don Jr, posted a selfie of himself with his daughter Kai.

On Friday, he and his wife were both photographed without their wedding rings. 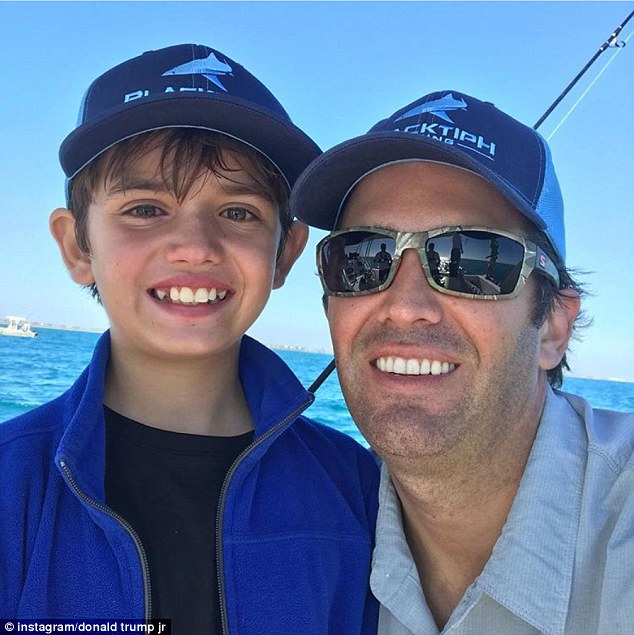 Donald Trump Jr posted this photo of himself out shark fishing with his nine-year-old son Donald John III on Saturday, the day after attending a fundraiser at Mar-a-Lago 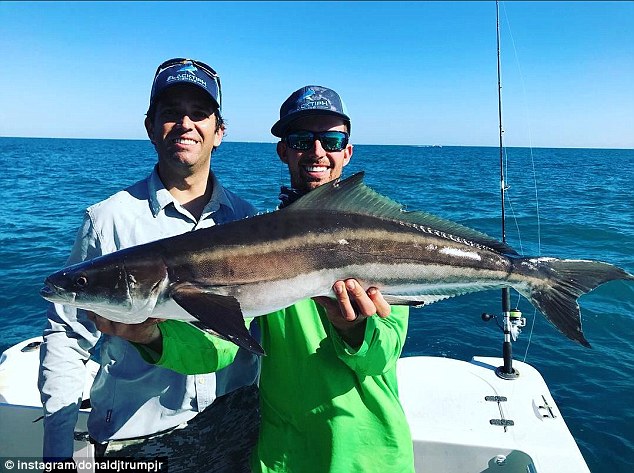 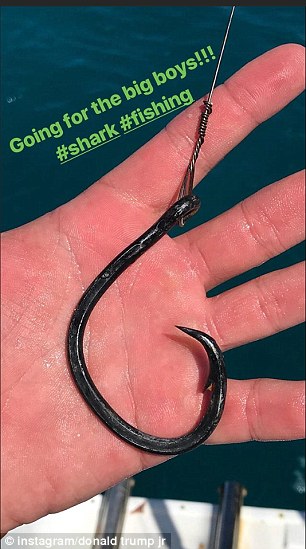 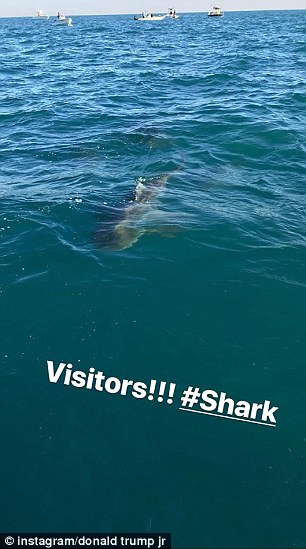 Don Jr was seen holding a folder full of papers and cigars as he ducked out of work early, leaving Trump Tower in Manhattan shortly after noon, sans band.

The mother-of-five, 40, was also sans ring as she was spotted heading off on the school run with her two youngest children Chloe and Spencer.

Vanessa and the kids attempted to sneak out the back entrance of their Manhattan apartment building around 8am on Friday, with three Secret Service agents closely flanking the family members.

Meanwhile, court papers reveal that Vanessa has hired herself a criminal defense lawyer to handle her split from Don Jr.

David Feureisen of the firm Bartels & Feureisen will be handling the split for Vanessa, who opted for a lawyer based in White Plains, which is close to the family’s residence upstate.

There is little else in the filing at this time, and the lawyer for Don Jr is not revealed in the one document that has been submitted thus far that can be viewed on the court docket.

Feureisen has been involved in a number of high-profile cases in Westchester and butted heads with Trump family friend Jeanine Pirro many a time when she was the acting district attorney for the area. 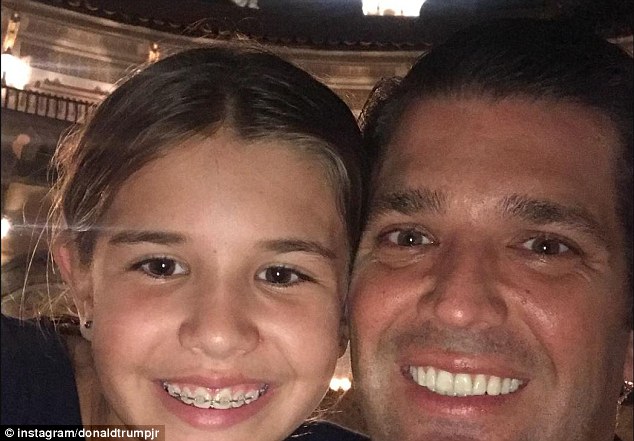 Don Jr, posted a selfie of himself with his daughter Kai. He captioned it: ‘Date night with Kai. Great father daughter time. #weekend #fatherdaughter #daughter #datenight’

In 2007, he managed to get a murder charge overturned after arguing that Pirro’s office had purposely withheld information that would have pointed to another suspect in the case.

Don Jr acknowledged his split from wife Vanessa for the first time on Thursday evening in an Instagram post.

‘No matter what is going on bedtime cuddling with the smurf puts a Yuge smile on my face. #bedtime#daddysgirl #cuddle,’ wrote Don Jr.

He included that remark alongside a photo of himself lying in bed with his daughter Chloe, the youngest of his five children.

Just a few hours earlier, a source told DailyMail.com that Vanessa had filed divorce papers in Manhattan Supreme Court after 12 years of marriage.

That source added that Vanessa listed the divorce as uncontested, meaning that she is not asking for full custody of the children at this time and that Donald Jr does not object to the filing.

‘After 12 years of marriage, we have decided to go our separate ways,’ the pair said in a joint statement. 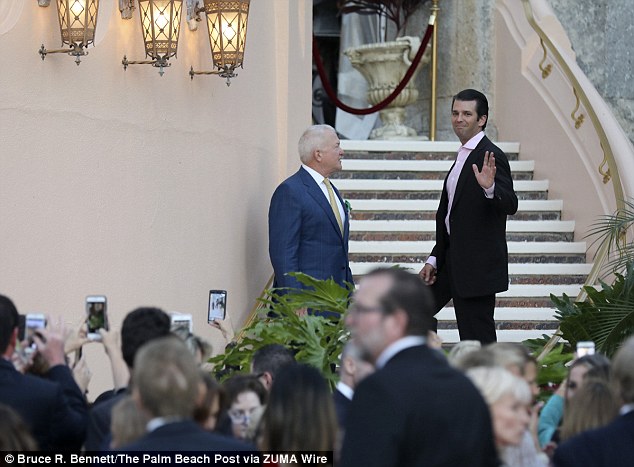 Trump, Jr. waves to guests before the start of the dinner at Mar-a-Lago in Palm Beach Friday

‘We will always have tremendous respect for each other and our families. We have five beautiful children together and they remain our top priority. We ask for your privacy during this time.’

Page Six reported shortly before the pair filed for divorce that Don Jr’s behavior on social media had caused problems in his relationship with Vanessa.

Recently, Don Jr liked tweets which made controversial and false statements about the victims of the Parkland shooting, including one that suggested there was a link between anti-depressants and the murderers responsible for mass casualty attacks.

He also liked a tweet that said 17-year-old David Hogg, one of the young students who is leading the call for gun reform, was just ‘running cover’ for his father, a former FBI agent. 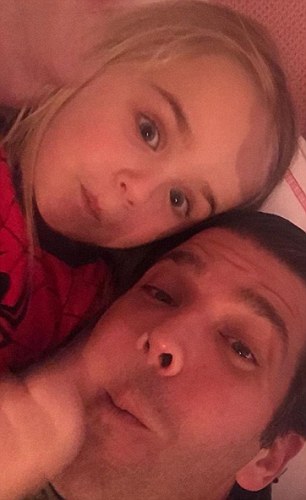 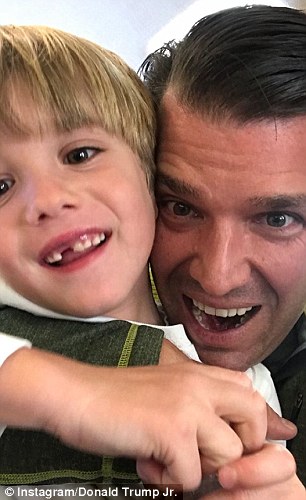 Trump Jr.has been pictured spending time with his other kids, including a bedtime photo with daughter Chloe, left, and hugging his son Tristan, right

Vanessa responded to that report by liking a number of tweets posted by her estranged husband and other members of his family.

Vanessa was photographed outside her Manhattan apartment building on Thursday morning shortly before her divorce papers were filed in court.

She was joined by Secret Service on Thursday, who unloaded her car outside the building.

This will be the first time that a child of the president has entered into divorce proceedings while their father held office.

Some are also now wondering if Vanessa could be called to testify against her estranged husband should he be indicted in the Russia probe.

‘In theory, Vanessa could talk about what Donald Trump Jr. knew about the Russia investigation if spousal privilege doesn’t apply, but that would take the divorce into a dark place,’ said Joshua Forman, a celebrity divorce attorney at Partner at Chemtob, Moss & Forman. 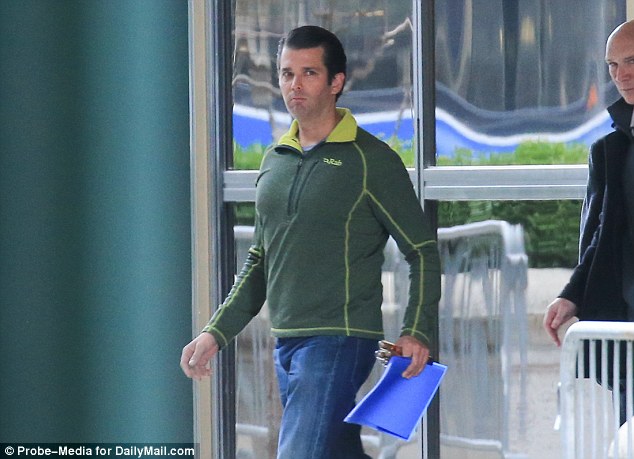 Down from his tower: Donald Trump Jr was seen for the first time since his wife Vanessa files for divorce (above on Friday in NYC) 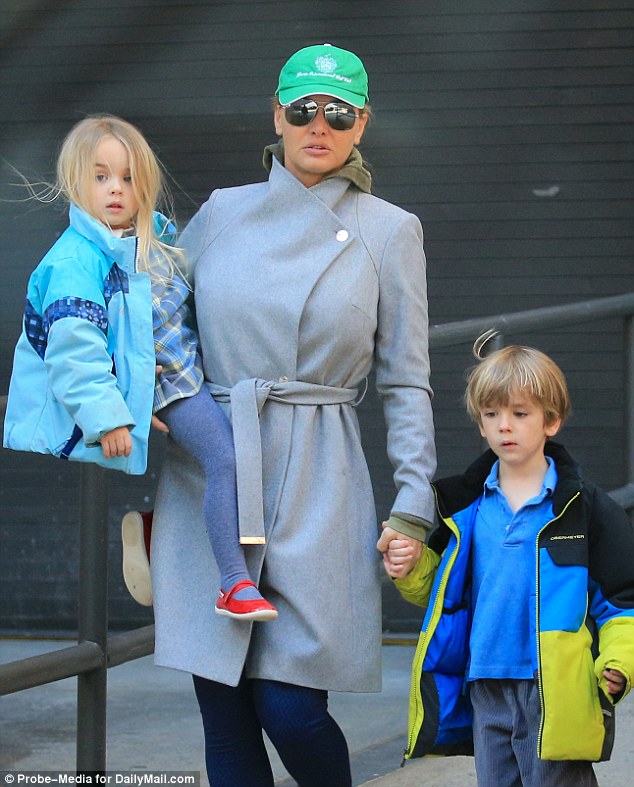 Over and out: Vanessa Trump, 40, did not wear her wedding ring as she headed out in new York City on Friday (above with daughter Chloe and son Spencer)

‘However, she may have signed a prenuptial agreement with a confidentiality clause and would thus be precluded from speaking during or after marriage.’

Page Six reported on Wednesday that sources close to the pair had said that the two were leading separate lives, and had been for some time.

‘The problems have been there for a long time, the couple had hoped to stay together during the president’s time in office, but it is getting harder to resolve their issues,’ said one source.

The two have been spotted together less and less in recent months, and spent almost no time with one another over the holidays at Mar-a-Lago.

Don Jr posted a number of videos to social media during the two weeks that the pair were in Palm Beach which showed him with the couple’s children but never Vanessa.

Vanessa was also absent from one of the family dinners and did not attend the annual New Year’s Eve gala, with Don Jr. instead taking his son Donnie.

It was also his birthday that night.

Then, in February, it was revealed that Vanessa was at an apartment a few blocks away from the family’s residence in Manhattan when she opened a letter addressed to her husband containing a mystery white powder.

In the wake of those reports, the two were seen together on February 13 doing the school run with their two youngest children, Chloe and Spencer.

A week later, the entire family traveled down to Mar-a-Lago for Donnie’s birthday. 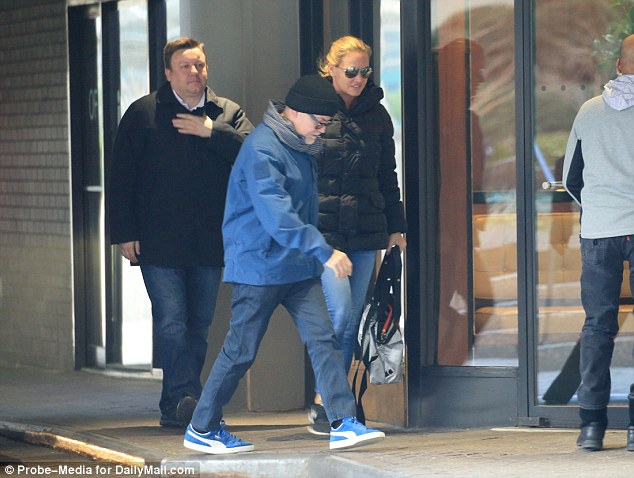 Moving on: Vanessa Trump is seen outside her Manhattan apartment building on Thursday before filing divorce papers in a Manhattan court

Don Jr posted a photo of that to Instagram which showed everyone smiling for the camera, writing: ‘Happy birthday Donnie. Some birthday cake for my 9 year old little man yesterday. Somehow I hit send then but it didn’t go through.’

Just before that trip however, Don Jr spent Valentine’s Day with another lady – his daughter Kai.

‘Valentine’s Day selfie with one of my favorite Valentines. Early dinner with my girl Kai,’ wrote Don Jr on Instagram.

Vanessa meanwhile was spotted out to eat with her sons Donnie and Tristan.

The couple had been introduced multiple times before going on their first date, with President Trump responsible for two of those introductions.

Vanessa said in a 2006 interview that he twice introduced her to his son at a fashion show in 2003, and she finally agreed to a date when they met a third time at a mutual friend’s party. 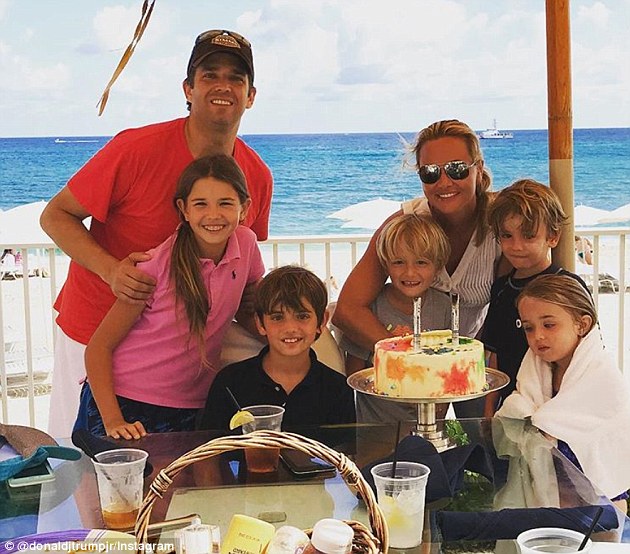 Cake by the ocean: The family was last seen together in February when they all celebrated Don III birthday in Palm Beach (above)

Vanessa said that she referred to Donald Jr as ‘the one with retarded dad’ sat the time.

The proposal was captured by the multiple photographers alerted to the fact that Don Jr would be proposing in front of the same jewelry store from which he obtained the ring for a heavily discounted price.

They were married at Mar-a-Lago in November 2005, though those plans were almost derailed due to Hurricane Wilma, which forced the couple to move the wedding from the club’s lawn to a more sheltered space by the pool due to the damage done by high winds.

Those nuptials took a backseat in the press however to the fact that the wedding marked one of the rare occasions when Donald and his new wife Melania came face-to-face with his ex Ivana.

Prior to marrying Don Jr, Vanessa had been linked to Leonardo DiCaprio and had a small role in the film Something’s Gotta Give.

Vanessa was very much in the spotlight prior to the couple’s wedding, but once the couple began to have children shifted her focus to raising their sons and daughters.

She gave birth to all five of the couple’s children in a span of just seven years.

In the wake of her father-in-law’s announcement that he would be running for president, Vanessa did step out on the campaign trail a bit, and occasionally posting on social media.

Vanessa also may have provided the first clue that she and Don Jr were leading separate lives back in November when she posted a photo of her Christmas tree of Twitter and wrote: ‘I just finished decorating our tree with my kiddies ! We are in the holiday spirit! Christmas will be here soon!’

There was no mention of her husband at all in the tweet.

She last posted a tweet that showed her with Don Jr back in June for President Trump’s birthday.