Donald Trump took a victory lap on Wednesday as he signed a trade deal with China at the White House as his impeachment sped towards the Senate on Capitol Hill.

He boasted to an audience of dignitaries that a new trade deal with China will bring ‘a future of fair and reciprocal trade,’ then complained about the ‘impeachment hoax,’ and praised a string of Republican senators who he needs to vote for his acquittal.

The president has long complained about a massive trade deficit between Washington and Beijing. He pledged during the 2016 campaign to come down hard on China.

‘We are righting the wrongs of the past,’ he said Wednesday, observing that ‘our negotiations were tough, honest, open and respectful.’

‘This is the biggest deal anyone’s ever seen,’ he said, because ‘China has 1.5 billion people.’

The president spent nearly a half-hour acknowledging business leaders and lawmakers who crowded into the East Room to watch. And he noted that some House members might have to leave early in order to vote on a motion to send articles of impeachment to the U.S. Senate.

Some of the congressmen may have a vote—it’s on the impeachment hoax—so if you want, you go out and vote. … It’s not going to matter becausae it’s gone very well. But I’d rather have you voting than sitting here listening to me introduce you, okay?’ he said with a grin.

‘They have a hoax going on over there. Let’s take care of it.’

Trump was not accompanied by Chinese President Xi Jinping, who sent Vice Premier Liu He in his place. Xi’s absence left some with the impression that Washington wants the deal more than Beijing does.

Done deal: Donald Trump and Liu He sign the phase one trade deal which calls a halt to escalations in the U.S.-China trade deal and is claimed to mean up to $50 billion in agricultural sales to China 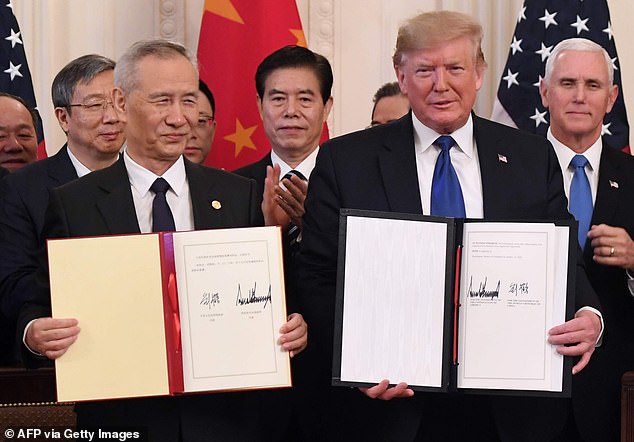 Signed, sealed, delivered: China’s vice-premier Liu He and Donald Trump show their signatures in the completed phase one trade deal 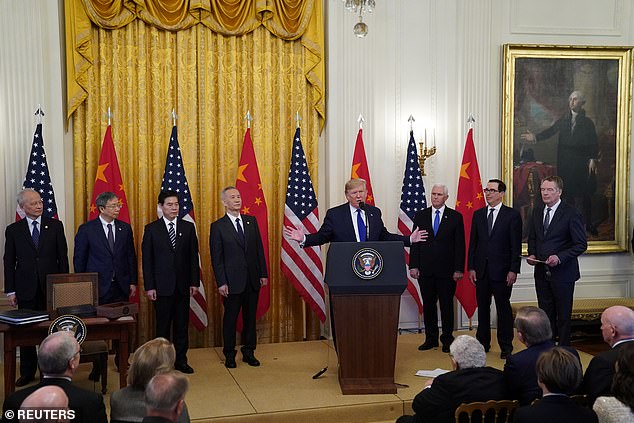 East room ceremony: Donald Trump hosted the Chinese vice-premier Liu He in the East Wing in front of an audience of Republican senators and Congressmen and figures from the American business world – almost all of whom he named 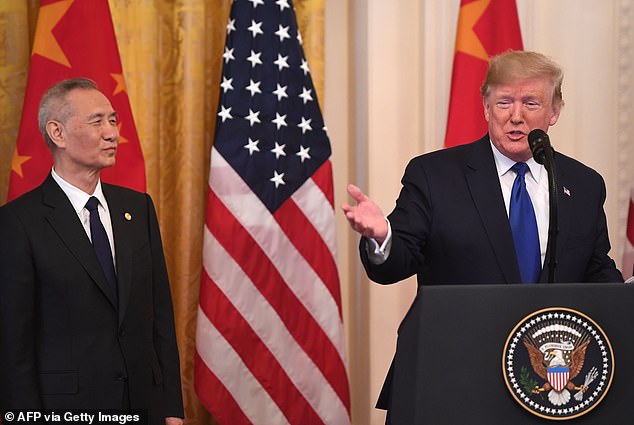 President Donald Trump stood alongside China’s vice premier Liu He, not its president Xi Jinping, when he signed a landmark trade deal on Wednesday 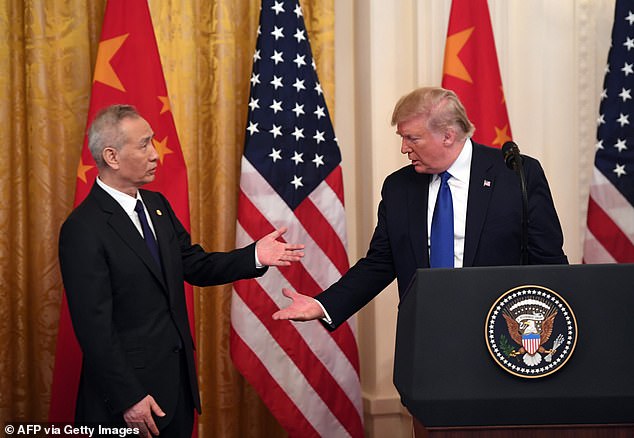 Awkward exchange: Donald Trump moved to shake hands with China’s vice-premier Liu He, who extended his left hand instead 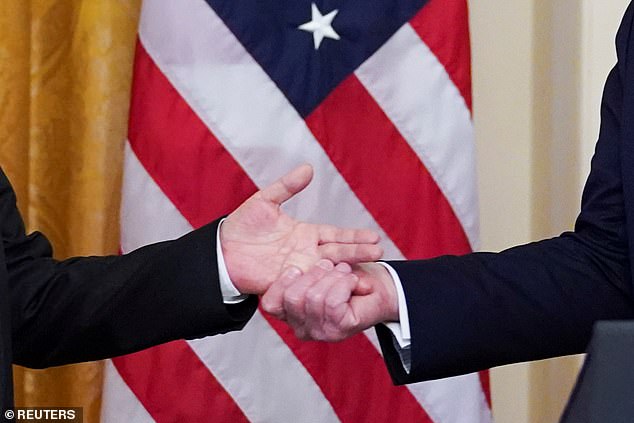 Unusual handshake: After Liu He extended his left hand, Donald Trump grasped two of his fingers in an attempt to shake his hand

The president announced that he will ‘be going back to China in the not-too-distant future to reciprocate,’ but it’s unclear what he would be reciprocating for.

And Trump said China will stop forcing American companies to share proprietary technologies with Chinese partners. ‘You don’t have to give up anything anymore. Just be strong,’ he said to business leaders in the room. 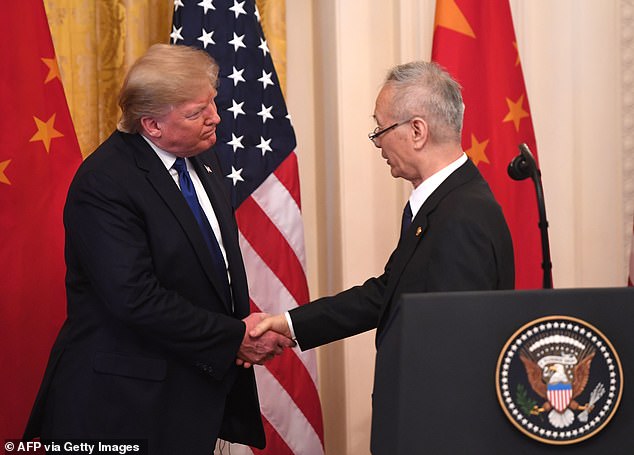 Second time lucky: After Liu He spoke through a translator, the two succeeded in shaking hands 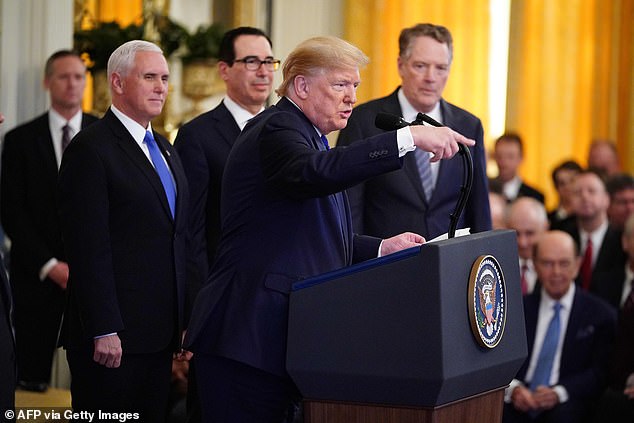 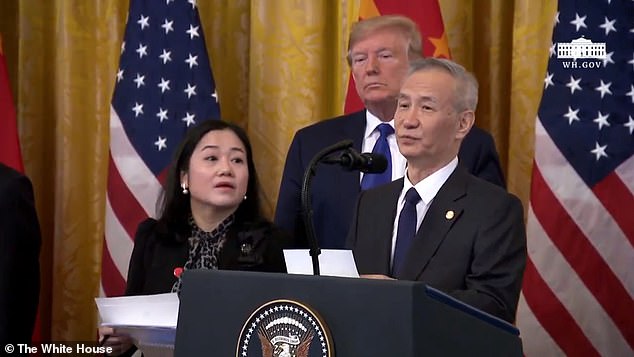 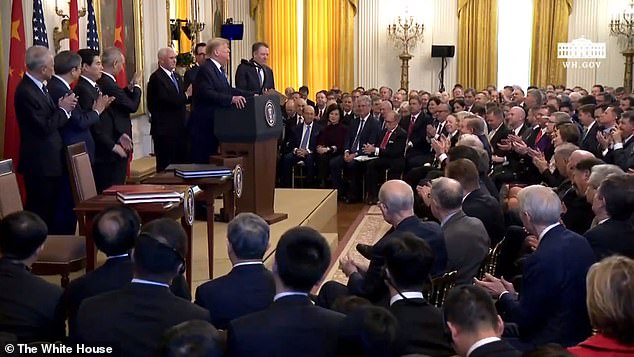 Packed: The East Room was fool for the invited audience of business leaders, White House aides and congressional Republicans 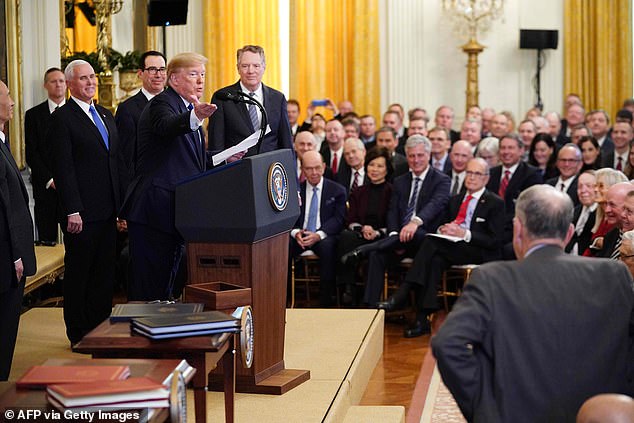 Everyone gets a mention: Chuck Grassley, the Iowa senator was asked to stand, while Trump claimed that Grassley had ‘made [James] Comey choke like a dog’ 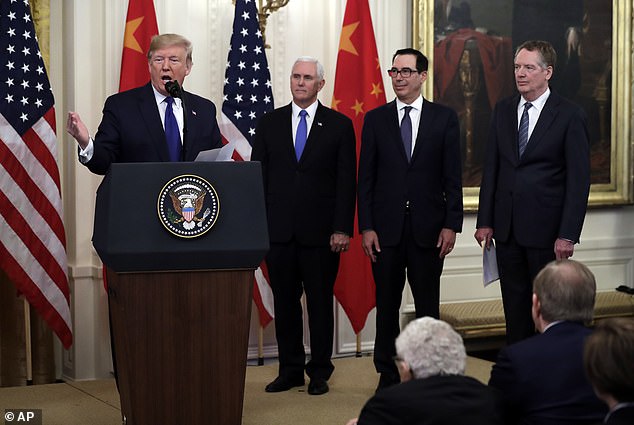 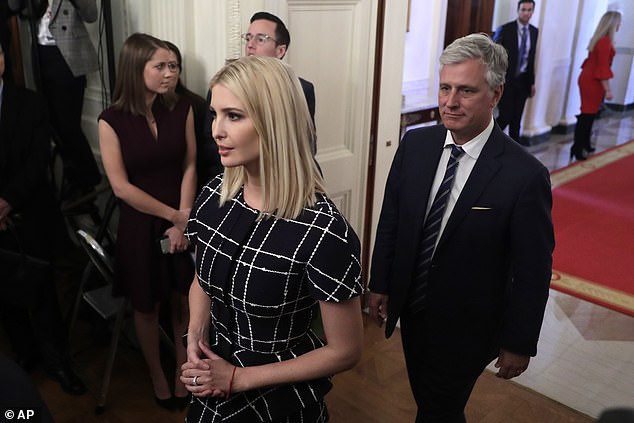 Branstad, a longtime Iowa governor before coming to Washington, got the job because of his deep ties to global agriculture.

While Wall Street will carefully examine the fine print, the trade deal will allow businesses around the globe to breathe a sigh of relief.

After a nearly two-year battle, the signing could give Trump an election-year boost as well. Still, tariffs on hundreds of billions of dollars in imports remain in place, leaving many Americans to foot the bill.

Reporters covering the East Room event on Wednesday wore White House credentials with no date printed on them. That unusual feature suggests Trump’s trade negotiators weren’t certain whether the event would happen as scheduled.

Journalists shoot shoulder-to-shoulder, including a contingent of dozens from Chinese media outlets.

The ‘phase one’ agreement—which includes pledges from China to beef up purchases of American crops and other exports—also comes just as Trump faces an impeachment trial in the U.S. Senate, giving him a victory to trumpet at least in the short term. 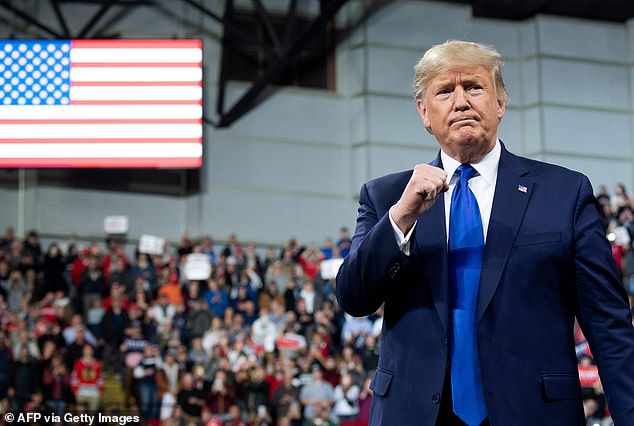 As he is about the face an impeachment trial, President Donald Trump will be able to tout a trade deal with China 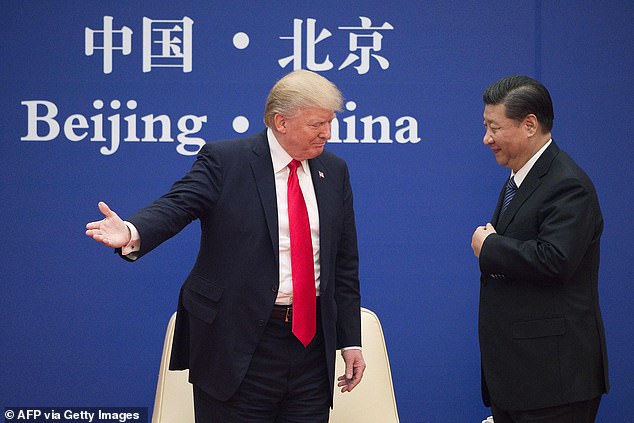 It’s unclear which country will get the better end of the deal, but Trump has trumpeted every development that is favorable to the United States 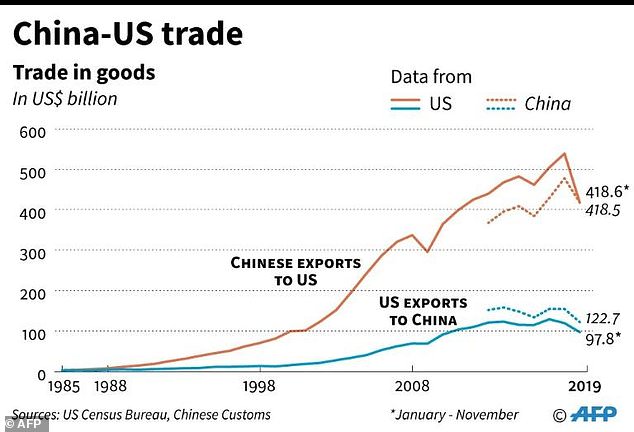 The easing of US-China trade frictions has boosted stock markets worldwide in recent weeks, as it takes the threat of new tariffs off the table for now.

If China fails to abide by the agreement, ‘the president has the ability to put on additional tariffs,’ Mnuchin said on CNBC Wednesday as part of a media blitz promoting the new pact.

However, the most difficult issues remain to be dealt with in ‘phase two’ negotiations, including massive subsidies for state industry and forced technology transfer.

But Mnuchin said the deal puts pressure on Beijing to stay at the negotiating table and make further commitments, including on cyber-security and other services to win relief from the tariffs that remain in place.

‘In phase two there will be additional roll backs,’ Mnuchin said. ‘This gives China a big incentive to get back to the table and agree to the additional issues that are still unresolved.’

Still, elements of the deal the administration has touted as achievements effectively take the relationship between the two powers back to where it was before Trump took office.

Even so, ‘The truce is good news for the U.S. and the world economy.’

Still, the trade expert with the Peterson Institute for International Economics, cautioned that ‘we will continue to see the impact of this in slower investment and higher business costs.’

U.S. officials have said they will release details of the agreement set to be signed at a White House ceremony at 11:30 a.m. Wednesday.

After announcing the deal December 13, the U.S. canceled a damaging round of new tariffs that were due to kick in two days later and promised to slash in half the 15 percent tariffs on $120 billion imposed September 1 on consumer goods like clothing. 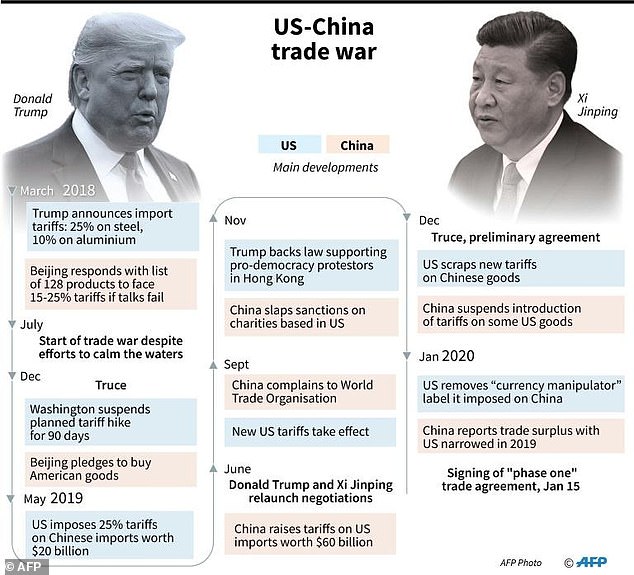 Mnuchin dismissed a Bloomberg report that the initial agreement could include provisions to roll back more tariffs on China after the election.

‘The tariffs will stay in place until there is a phase two. If the president gets phase two quickly, he will consider releasing tariffs. If not, there won’t be any tariff relief,’ Mnuchin said Tuesday on Bloomberg TV.

‘It has nothing to do with the election or anything else.’

Washington said Beijing agreed to import, over two years, $200 billion of U.S. products above the levels in 2017, before Trump launched his offensive.

Trump has repeatedly touted the trade pact as a boon for American farmers, saying China will buy $40 to $50 billion in agricultural goods.

U.S. farmers were hit hard by the tariff war—notably on soybeans which saw exports to China plunge to just $3 billion from more than $12 billion in 2017. The Trump administration paid out $28 billion in aid to farmers in the last two years.

But many economists question whether they have the capacity to meet that demand.

And Lovely raised a question about the wisdom on relying so heavily on the Chinese market.

‘It also means Chinese retaliation could be reinstated, dampening farmers’ willingness to invest to meet the very hard export targets in the deal.’ 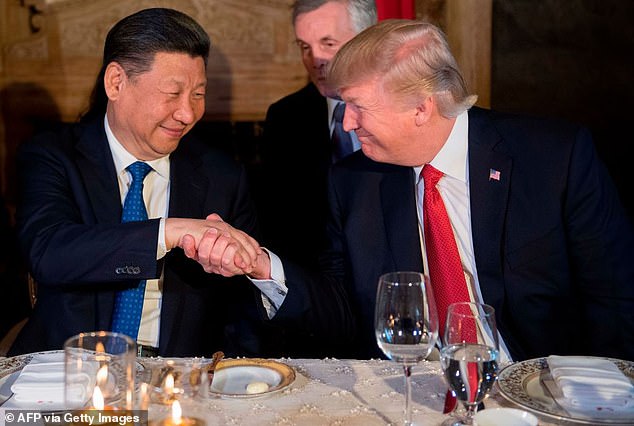 U.S. and Chinese officials say the agreement includes protections for intellectual property and addresses financial services and foreign exchange while including a pr.ovision for dispute resolution, which Mnuchin said will be binding for the first time.

Trump in August formally accused China of manipulating its currency to gain an advantage in trade and offset the impact of the tariffs.

The label, which had no real practical impact, was removed earlier this week.