A doomsday prepper who has built a bunker and spent an additional $27,000 to prepare for nuclear disaster has opened up about her prepping plan amid the Russia-Ukraine war and cost of living crisis.

Rowan MacKenzie, 38, a homemaker from Missouri, became a social media phenomenon after revealing she’s been prepping her home for 11 years because of fear of an emergency and has upped the ante, spending nearly $30,000 on supplies as a result of the intensification of the war between Russia and Ukraine.

The ‘prepper’ has taken new measures to ensure her family is kept safe as Putin’s war with Ukraine continues and other countries are strained as a result.

Rowan MacKenzie, a doomsday prepper, has revealed she spent an extra $27,000 on new supplies to prepare her family amid the Russia and Ukraine war 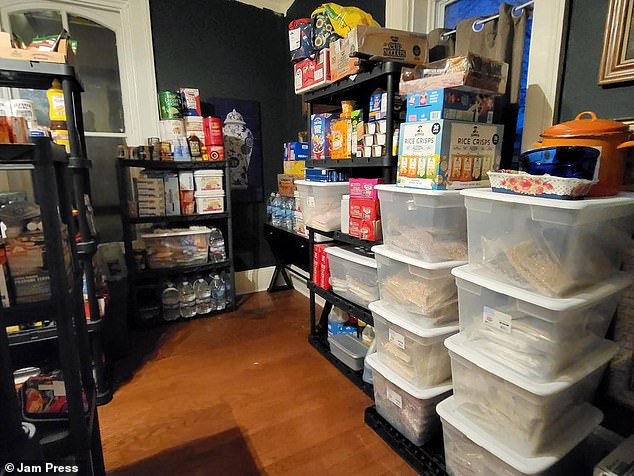 The 38-year-old, from Missouri, has taken new measures to ensure her family is kept safe as Putin’s war with Ukraine continues 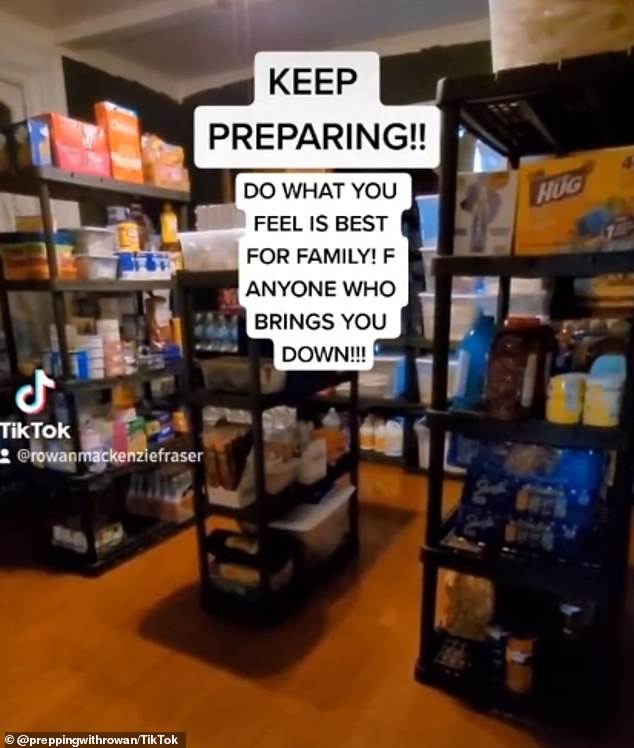 In total, she’s spent $20,000 on food, self-sustaining materials and weaponry – but with these new additions, she now believes the amount is close to $45,000.

‘I’m preparing, as a whole, for war, inflation, nuclear disaster and all out chaos,’ Rowan said.

‘The price of everything here has gone up so much – but I need to ready myself and my family for a disaster situation.

‘I’ve added a lot more food to the bunker and a new water filtration system, as well as some chickens and a turkey. 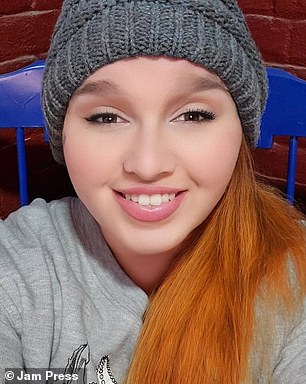 ‘We’ve also set up a large greenhouse, so we can start reproduction of more homegrown food.

‘It’s been necessary for us to add more ammo and weapons to the secret bunker as well.’

Rowan claims most of her stock will last up to 25 years and she has a ‘flawless’ rotation system to ensure there isn’t any waste.

However, her biggest piece of advice? Stock up on weaponry.

She said: ‘The number one must for any bunker is defense.

‘I would highly recommend having a few guns and knives in your bunker at all times, along with ample amounts of ammunition.

‘You need to protect yourself, especially in a ‘dog-eat-dog’ situation.

‘It’s kill or be killed and you need the best possible chance of survival. 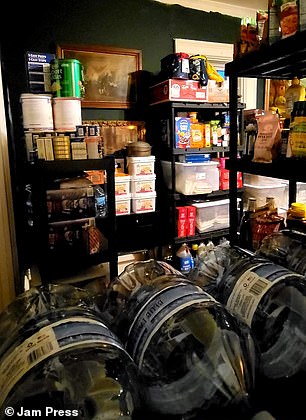 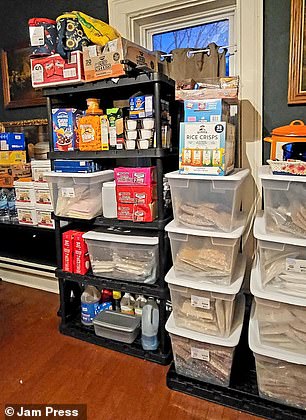 She’s been prepping her home for 11 years for an emergency and has upped the ante as she spent nearly $30,000 on supplies as the war between Russia and Ukraine intensifies 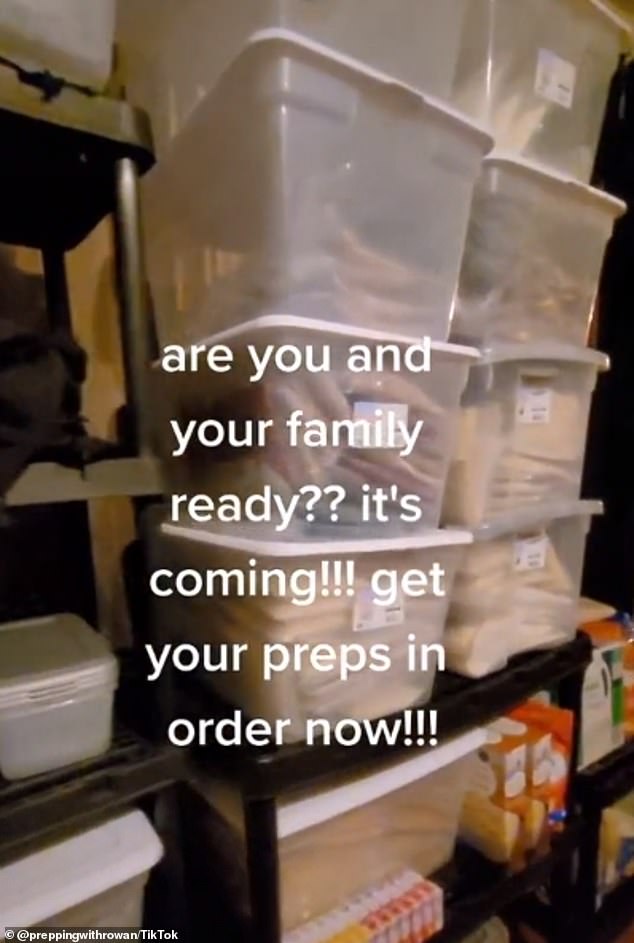 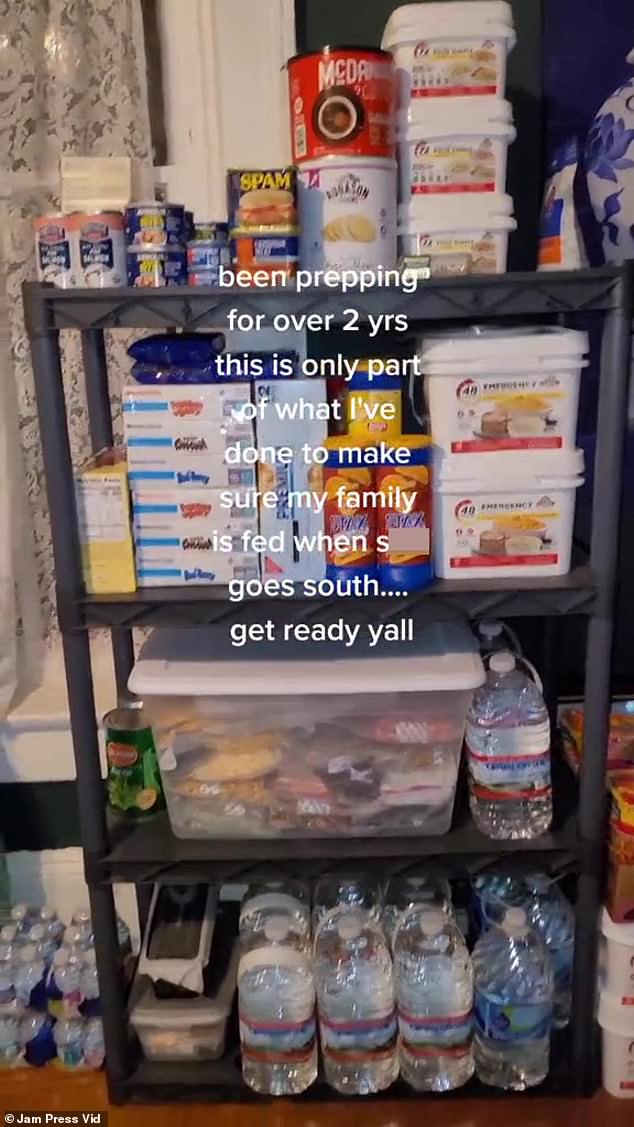 She warns that everyone should have the most basic prepping supplies on-hand, such as weaponry, first aid items, and long-lasting food, including rice and beans

‘Also, if meat becomes scarce, guns are good for hunting.’

Can you ever be too prepared? Rowan’s intense plan to prepare for nuclear disaster

Rowan has even begun ‘practicing’ scenarios with her family and testing out which food products she can easily cook, are the best to eat, and which last the longest, so she knows what to stock up on.

Rowan added: ‘Knowledge is power and I love to help people – it’s what I do.

‘I feel like I’ve made myself very vulnerable, but I believe it’s for a good cause.

‘My friends and family think I’m crazy, but I always tell them that when the time comes, they won’t be calling me crazy then.

‘I prep for now, as you never know day-to-day what might happen.

‘The day is upon us where being prepared is a blessing, as food is disappearing and becoming overpriced due to the war.

‘We will all feel the side effects eventually. My biggest advice is: don’t panic. Breathe, make a list and execute.

‘There is no better feeling than knowing you are ready for anything that could happen and having your family protected. The main thing is to remain calm and have a plan.’

In February of 2022, Russia evaded Ukraine in a major escalation of the war that began in 2014.

The invasion resulted in Europe’s largest refugee crisis since World War II and caused over 7.6 million Ukrainians to desperately flee their country.

Since the invasion, thousands of Russians and Ukrainians have been terrorized and  killed as a result of a war Putin is determined to win.

The mother does not often show off her weapons on TikTok – which has strict regulations about the kind of content that can be shown – however she has multiple guns in her possession (seen in cases), as well as ammunition 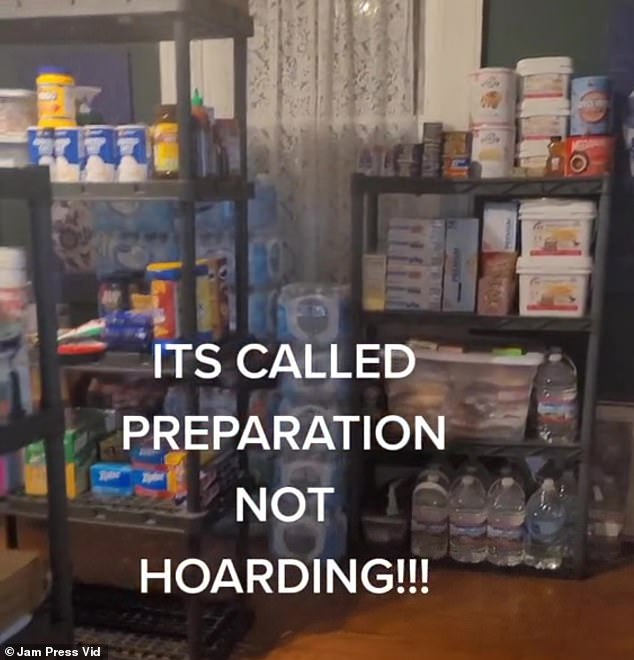 Rowan has even begun ‘practicing’ scenarios with her family and testing out which food products she can easily cook and which last the longest, so she knows what to stock up on

The invasion also set up a clash of nuclear world powers as it destabilized Ukraine.

The bombardment of Russia has resulted in many humanitarian issues as access to food, clean water, medicine and electricity has dwindled as a result of the continued fight.

United States and European allies have imposed sanctions on Russia such as a ban on Russian energy imports, which is the most restrictive ban ever imposed against a major economic power.

The sanctions target Russia’s financial system and fossil fuels and are meant to be a punishment for Putin and those who support him and depend on the Russian economy, making it near impossible to conduct business as usual in Russia.

These sanctions mean economic slow down in other countries as well, which is why Rowan has began prepping her family for what could possibly come as America has been facing food shortages and inflation.

The doomsday prepper has made headlines in the past after revealing she had a hidden bunker installed into her home and believes it necessary to prepare for the end of the world.

Rowan began stocking up her cupboards 11 years ago and initially, bought long-life cupboard essentials, such as beans and rice, which she taught herself to preserve through trial and error. 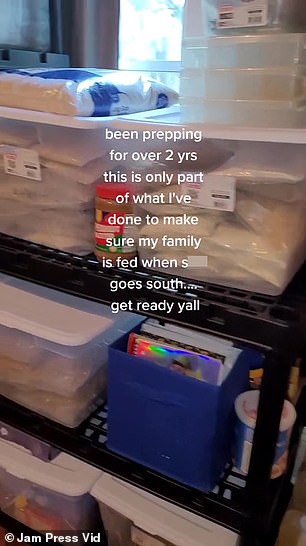 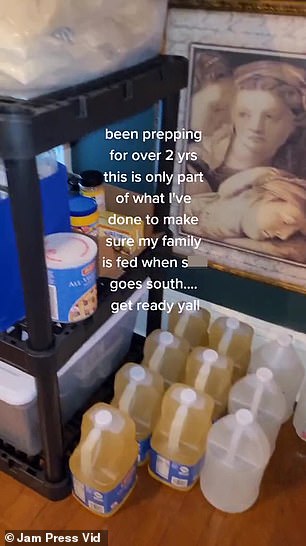 While many people have been left impressed by Rowan’s videos, she does occasionally receive backlash from those who have accused her of ‘hoarding’ or promoting ‘panic buying’ 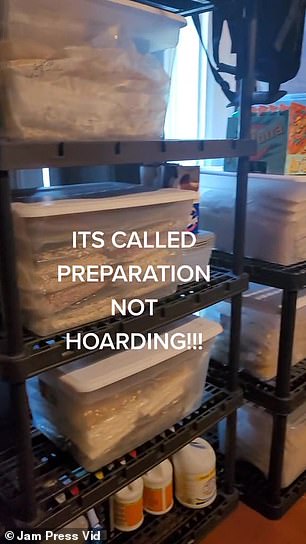 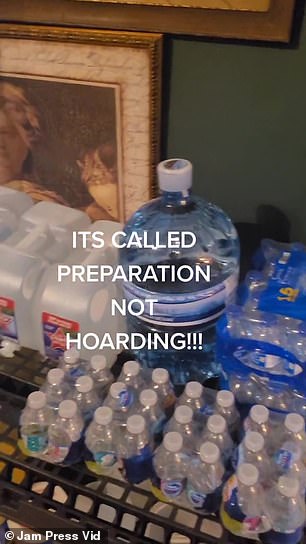 Rowan doesn’t mind when people criticize her and said: ‘My friends and family think I’m crazy, but I always tell them that when the time comes, they won’t be calling me crazy then 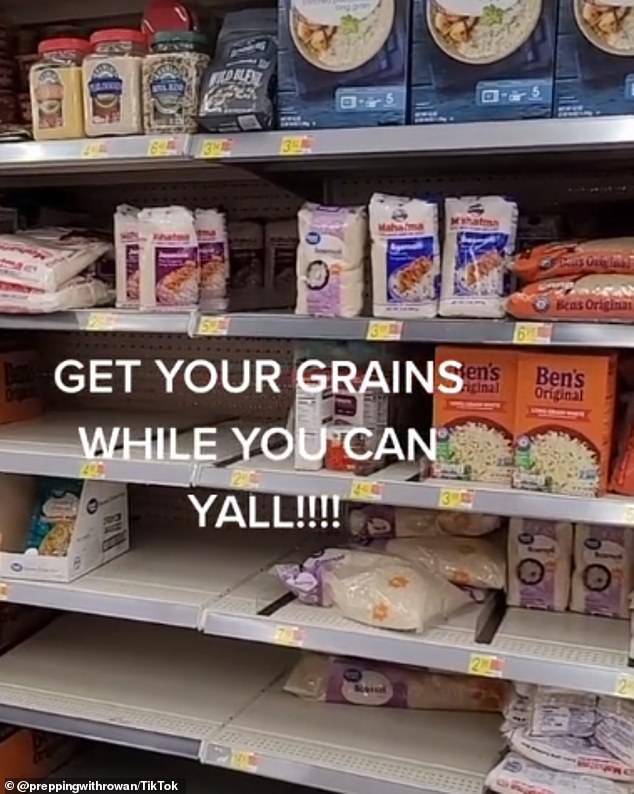 The war made Rowan realize she needed to prep more and added: ‘The day is upon us where being prepared is a blessing, as food is disappearing and becoming overpriced due to the war

As her stock grew, Rowan decided to spend $10,000 on having the created in her home her home, where she keeps food and water, as well as defense weaponry.

In a bid to educate others about the importance of prepping, she regularly uploads videos on TikTok.

Across the video, the text reads: ‘It’s called preparation not hoarding!!!’ as she walks around the stocked-up room.

Rowan begins with saying: ‘I was just told that I was a hoarder and it’s people like me, who make it hard for others to feed their children because I’m taking all the food off the shelves.’

She then asks people to do their research before making these comments, classing her efforts preparing, not hoarding.

She ends the clip with saying: ‘There’s a huge difference – I’m here to inform, I’m a good person, I’m a really giving person and I would never do anything to prevent a mother from feeding her child.’

Users have flocked to the comments to share their praise the prepper for her efforts.

‘Preppers don’t empty the shelves like many did last year. They invest and stock up over time,’ one person said.

Another user added: ‘You’re smart. Your survival skills are awesome. They’ll be the ones knocking at your door for food. Don’t let them in your house.’

‘I’m a prepper and support you 100 per cent but I would never show my food supplies,’ someone else said.

Another person added: ‘I love your stockpile! I wish I had the space you do.’

‘You’re right this is preparing! The unprepared and uniformed will suffer and die. Don’t let them get you down,’ one viewer commented.