A double amputee whose meningitis was mistaken for the flu has pleaded for new university students to get their jabs ahead of freshers’ week.

Mike Chinchen, now 50, from Bournemouth, went straight home to bed after falling ill at work in 2002 but was violently sick throughout the night.

The sales manager rushed to his local GP the next morning where he was diagnosed with the flu and advised to pick up general medication from the pharmacy.

But after speaking with the pharmacist Mr Chinchen was advised to go straight to hospital where he collapsed.

When doctors realised he had contracted meningitis he was placed in an induced coma for three weeks.

Mike Chinchen (pictured with son Sam), 50, lost both of legs to meningitis after his meningitis was mistaken for the flu 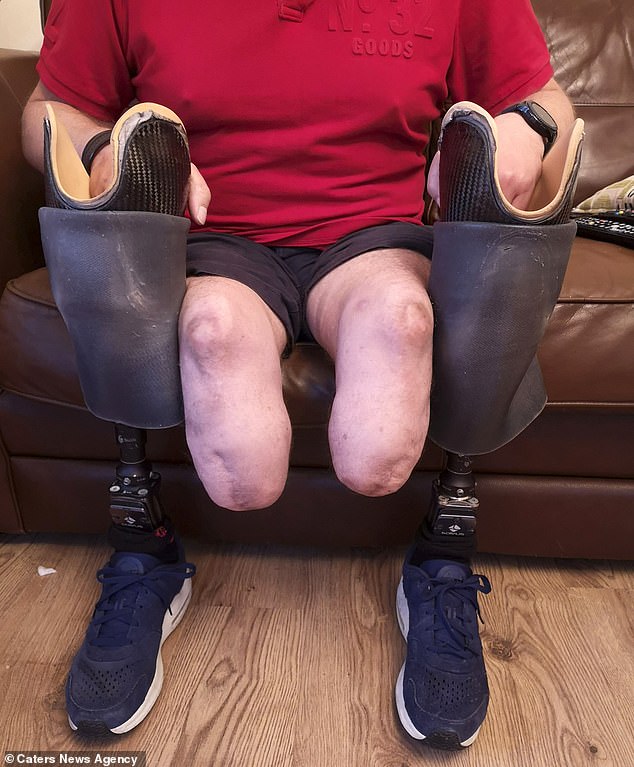 His meningitis caused life-threatening blood poisoning, known as meningococcal septicaemia. The condition saw blood and oxygen struggle to reach his limbs and they began to die 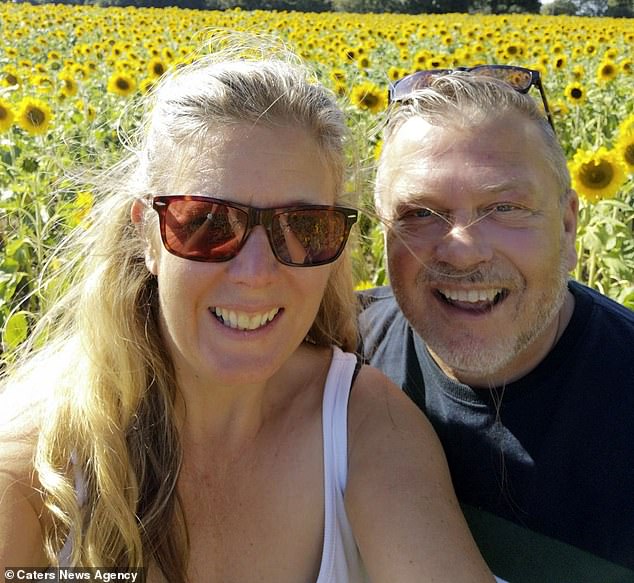 The sales manager (pictured with partner Shelley), from Bournemouth, is sharing his story in hopes that it encourages new university students to have their meningitis jabs ahead of the new semester

The deadly condition had poisoned his blood and cut off circulation to his legs, causing them to slowly die.

After a three-month stint in hospital, the father was given two below-the-knee amputations to alleviate the excruciating pain. He also lost the tip of three of his fingers on his right hand.

Mr Chinchen said: ‘When I got home from work that day I went straight to bed, but after waking up to be violently sick several times that night I knew I wasn’t well.

‘Even once I went to the GP and they told me I just had the flu, I knew that wasn’t the case – but if it wasn’t for the pharmacist advising my partner at the time to take me to hospital I probably would’ve died.

‘As soon as I got to the hospital I collapsed – I don’t remember anything except for slowly waking up from an induced coma three weeks later.

‘Despite the hospital trying to salvage as much of my body as possible, I had to have both of my legs amputated below the knee and three of the tips of my fingers on my right hand taken too.

Now, Mr Chinchen is sharing his story in hopes that it encourages new university students to have their meningitis jabs ahead of the new semester. 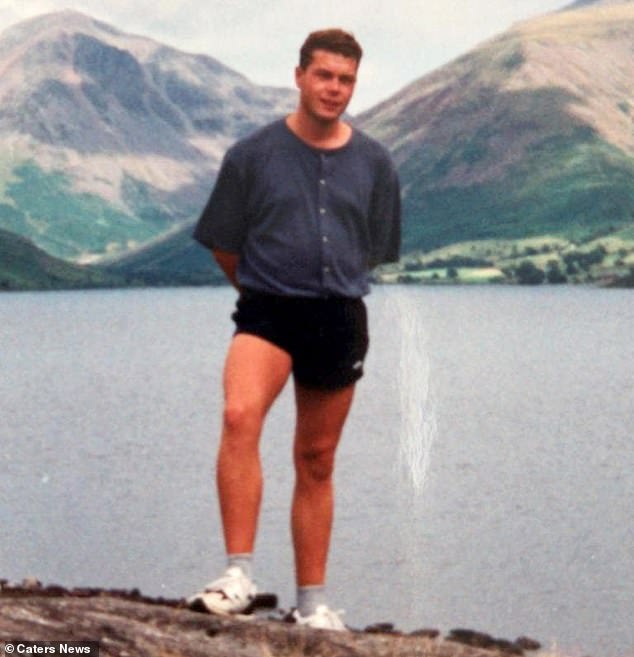 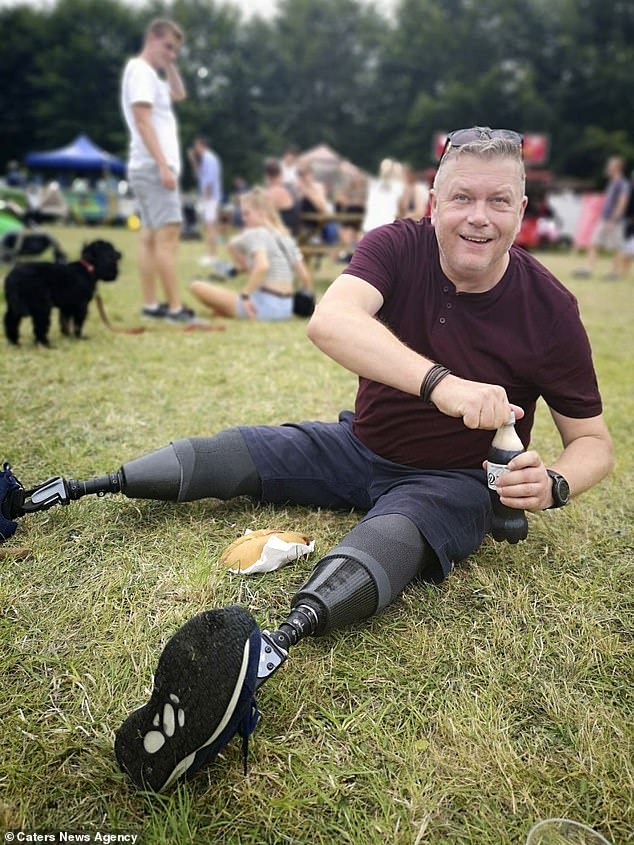 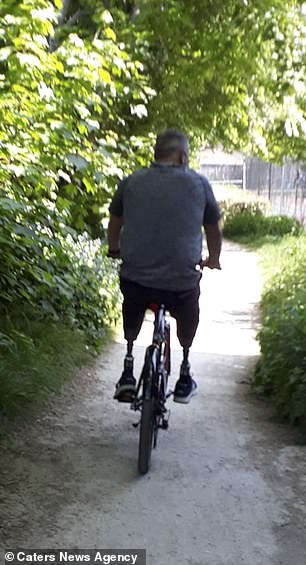 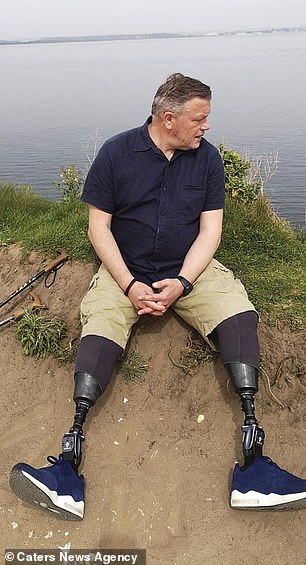 The fit father is now back cycling and hiking, and has started raising money for Meningitis UK

He added: ‘If I can give one bit of advice after going through such a horrible experience, it would be to encourage everyone to get the meningitis vaccinations to stop this happening to them – especially for new university students.’

Teenagers and ‘fresher’ students going to university for the first time are advised to have a vaccination to prevent meningitis and blood poisoning.

The so-called Nimenrix vaccine is given by a single injection into the upper arm. It protects against four different strains of the meningococcal bacteria that cause meningitis and blood poisoning: A, C, W and Y.

Cases of meningitis and blood poisoning caused by a highly virulent strain of Men W bacteria have been rising since 2009.

What is meningococcal septicaemia?

This is the most dangerous and deadly type of meningococcal disease.

It happens when the bacteria enter the bloodstream and multiply uncontrollably, damaging the walls of the blood vessels and causing bleeding into the skin (which results in the distinctive rash).

Symptoms may include fever, fatigue, vomiting, cold hands and feet, cold shivers, severe aches or pain in the muscles, joints, chest or abdomen, rapid breathing, diarrhoea – and, in the later stages, a pinprick or purple bruise-like rash.

Septicaemia can lead to death within hours, or permanent disabilities such as severe scarring due to skin grafts and amputation of the fingers, toes, arms or legs – due to lack of blood circulation in the extremities of the body.

Older teenagers and new university students are at higher risk of infection because many of them mix closely with lots of new people.

Some unknowingly carry the meningococcal bacteria at the back of their noses and throats.

Overall, it’s estimated up to one in every 10 cases of bacterial meningitis is fatal.

When septicaemia causes damage to blood vessels, blood leaks out, causing the rash that does not fade under pressure.

Without blood and oxygen reaching the skin and underlying tissues, they begin to die, leading to skin damage, loss of fingers and toes or amputation of limbs.

Mr Chinchen said he made the decision to go ahead with his amputations to give him a shot at life for his family.

He said: ‘Before my operation my head was the size of a football and both of my legs, and three of my fingers had gone black from the sepsis – there was no chance they were going to be saved.

‘I knew that I had to go ahead with the amputations so that I could be there for my family.

‘Luckily, I sprung back from the operation very quickly and just two months later was able to walk with the help of prosthetic limbs.

‘As horrible as losing my limbs was, I’m glad that I am able to see my son grow up and be there for my family still.

‘But I really do believe that if I had the meningitis jab beforehand then none of this would happen – so if you are offered it, please do take it so you don’t end up in the same way that I have.’

Mr Chinchen’s partner Shelley is running in the London Half Marathon in support of Meningitis UK. To donate click here