I have suffered with itchy, red skin for many years and have tried oral steroids, antihistamines and strong creams to help – but they’ve never cleared the rashes completely. A friend suggested Sudocrem. I know it’s best known for treating nappy rash, but should I try it?

Some skin creams work better than others – depending on the condition you have. For instance, the most common skin problems, eczema and dermatitis, cause the skin to be very dry, which means the treatment must be ultra-moisturising.

Doctors recommend something called an emollient cream: paraffin- or glycerin-based creams that lock in moisture when applied repeatedly through the day. Steroid creams and antihistamines may also be advised to reduce inflammation and any itchiness.

Nappy creams like Sudocrem mostly contain zinc oxide. They are known as barrier creams as their function is to protect skin from irritants in the environment and stop it drying out.

If a barrier cream is working well, it suggests the problem is triggered by irritants – like soaps, creams or washing powders. Doctors often use such creams to treat dermatitis, where sore, itchy patches develop in response to chemicals.

There is no harm in trying a barrier cream and continuing with it, if it is working well. Using an emollient alongside may help to add more moisture to the skin, particularly at night.

Ultimately, medical skin creams are often about personal preference – different ones can work for different people.

I have had a horrible burning sensation on my tongue and lower gums for a few months now. The problem seems to get worse as the day goes on – and after eating. Neither my doctor nor my dentist have been able to find anything wrong. Can you help?

A condition called burning mouth syndrome is surprisingly common but, unfortunately, little understood by doctors. The problem causes a hot sensation or burning sensation on the lips, tongue or even all over the mouth. The feeling often gets worse after eating hot or spicy foods, after talking and during stressful times.

Scientists don’t understand what causes it, but we know it is far more common in women than men – particularly around the menopause.

It is likely that it falls into a category of neuropathic pain – where the nerves carrying pain messages between the tongue and the brain malfunction and mistake heat for pain.

It is important to rule out other problems in someone with burning mouth syndrome, including a fungal mouth infection, vitamin deficiencies or any serious oral conditions such as lichen planus or gingivitis.

All of these complaints can be easily treated by a GP or dentist.

Unfortunately, there isn’t an awful lot that can be done about burning mouth syndrome, apart from accepting it is a part of your life and learning strategies to cope with the symptoms. For instance, distracting from the problem using relaxation, breathing techniques and meditation can help.

GPs can also prescribe special neuropathic painkillers or specific low-dose antidepressants to target the pain. Some data suggests it may be helpful to try a dietary supplement called alpha lipoic acid from a health food shop and keeping a diary to see whether or not this is helpful.

Over the past week or so I have developed a very sore eye. It doesn’t look particularly red, but it keeps watering and it’s painful when I touch my eyelid. I can’t put make-up on and everything seems to irritate it. Do you have any suggestions?

Our eyes are extremely sensitive and lots of things can make them feel sore.

Most commonly, eye problems are caused by infection or allergy, but they usually make the eye look red.

It could be a condition called blepharitis – inflammation of the eyelids. This is usually not painful but it does cause irritation, watering and some discharge.

Alternatively, there is a chance you may have scratched the front of the eye – the cornea. This is called corneal abrasion.

This usually starts suddenly after injuring the area without knowing, for example by scratching it with a fingernail.

This kind of problem, and other infections in the cornea, are especially common in contact-lens wearers, and a doctor would recommend antibiotic drops.

A less common cause of sudden eye pain would be glaucoma, where the optic nerve, which connects the eye to the brain, becomes damaged – so a prompt check-up is a good idea.

But before visiting a GP, it may be worth asking a pharmacist for an artificial tear or lubricating drop to wash out any dirt that may be causing irritation.

Hospitals rob the elderly of independence – this must stop

Last week The Mail on Sunday told heart-wrenching stories of people leaving hospital with incontinence as a result of pressures on hospital staff. Family members said older relatives had gone on to wards for simple procedures such as hip replacements and were unnecessarily put in adult nappies or attached to a catheter – which funnels urine into a bag – because staff didn’t have time to take them to the toilet. This stops the bladder working properly.

Emails from readers tell me that many have been affected by this. But they also reveal an even more disturbing trend: patients emerging from hospital unable to put one foot in front of the other. They are admitted for a minor procedure fully independent, and come out unable to do simple daily tasks. 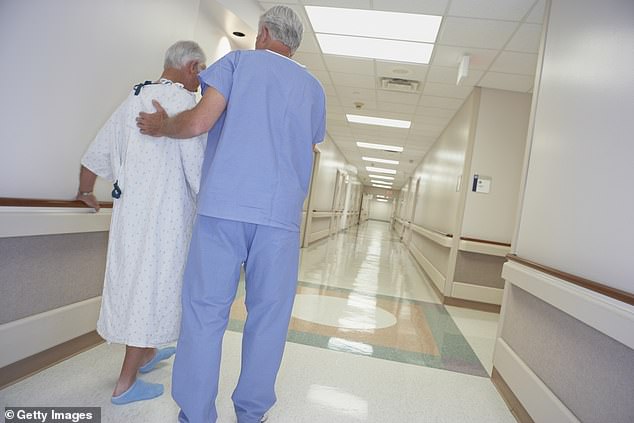 Family members said older relatives had gone on to wards for simple procedures such as hip replacements and were unnecessarily put in adult nappies or attached to a catheter – which funnels urine into a bag – because staff didn’t have time to take them to the toilet. This stops the bladder working properly

In most cases, staff had failed to support them to get up and about. I know hospitals are stretched, but this shouldn’t be happening. I’m interested to know if your loved-one has been robbed of their independence after a hospital stay. Write and tell me at the email address below.

According to reports published last week, increasing numbers of patients are turning to bizarre and dangerous methods to get rid of it. I’ve also heard of people using hair pins, and even came across a video of a man using an in-ear camera to get a closer look.

Few GP surgeries offer wax removal because most of the time it isn’t needed – usually it comes out naturally. And it’s important – it protects the ear. 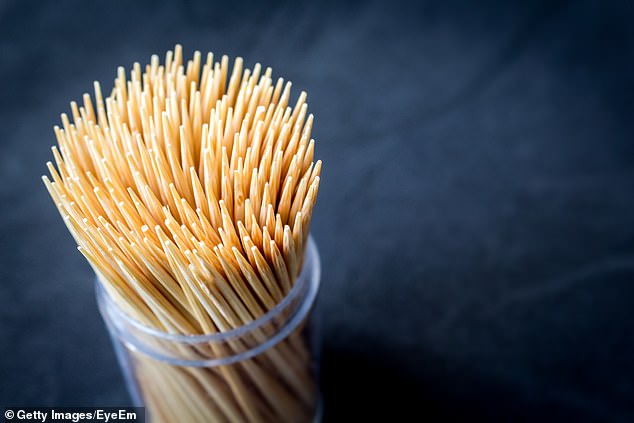 Some people are using increasingly bizarre methods to clear their ear wax – including tooth picks, pictured, hair pins and even a video of a man using an in-ear camera to get a closer look

But sticking things in the ear risks damaging the ear drum, causing infection and jamming the wax further in.

If your hearing does suffer due to wax, ask a pharmacist for softening drops or oil. Alternatively, some opticians offer removal procedures.

Whatever you do, don’t attempt to solve the problem yourself.