A man with complications due to diabetes decided to throw a party before undergoing a medically-assisted death.

Grandfather Dan Laramie, 68, was surrounded by 50 friends and family at home in Canada on Saturday for a celebration of his life before he passed away.

Laramie decided he wanted to have a medically-assisted death as he had diabetes and the condition was worsening.

Dan Laramie, 68, (pictured) was surrounded by 50 friends and family at home in Canada on Saturday for a celebration of his life before he passed away 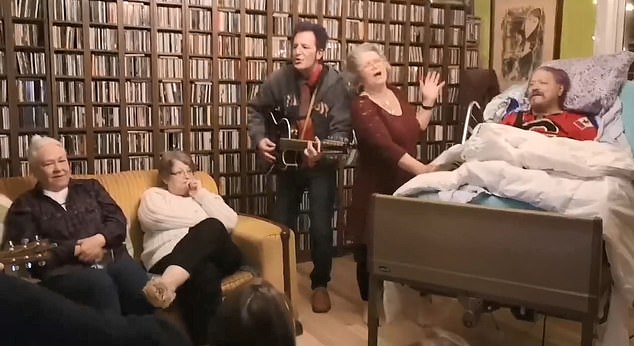 Friends and family celebrate musician Dan Laramie’s life with a song that he wrote, before his medically assisted death later that evening

Dan had diabetes since childhood. However he developed complications and was having problems with his blood pressure, his kidneys and heart.

His wife Stef Laramie said he was faced with medical options about two months ago when surgeons told him he would require further amputations.

The celebration took place at the couple’s home in South Okanagan, just outside of Vancouver in Canada.

Stef told CBC’s Daybreak South: ‘His diabetes got worse, his kidneys got worse, his heart, his blood pressure, he went to see a surgeon and the surgeon immediately put him in hospital.

‘Right from the beginning, he always said I don’t want them nipping away at pieces of me to try and save me if I can’t be saved.

‘Maybe two months ago we were told about the choices, his medical diagnosis, it wasn’t easy from that perspective to make a decision from the doctor’s end.’

She added: ‘What they had to do was make sure he was cognitive of what was going to happen and that he was making a clear decision.

‘We had many conversations and he really wanted a party, a celebration and I loved that idea. It made it so great and we started to talk about what he wanted.’ 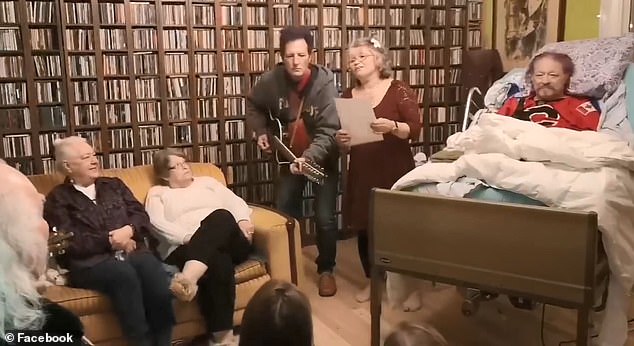 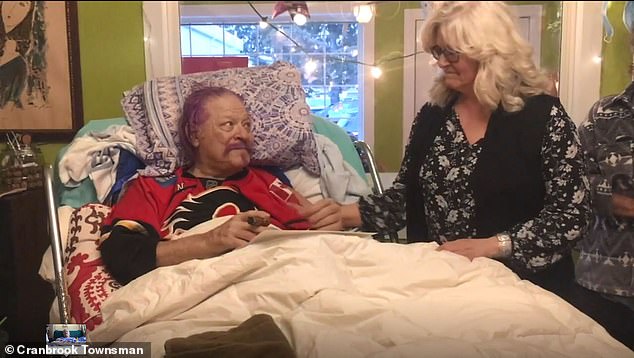 Last May, a surgeon told Laramie at an appointment that he’d have to amputate a couple of toes and he was immediately hospitalized.

There was calcification in his blood vessels, his organs were failing, and they realized his body was no longer able to heal at the rate it needed to for him to live.

He spent the majority of the last year in hospital, suffered a stroke, lost his right leg to amputation as he had an aggressive form of gangrene, according to Cranbrook Daily Townsman.

Stef Laramie, who is a singer, said she and her husband once had a Karaoke band called K-town and a five-piece rock band called Lulu and The Lazy Boys. 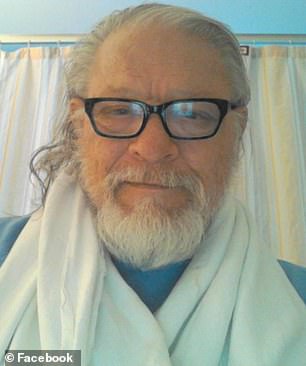 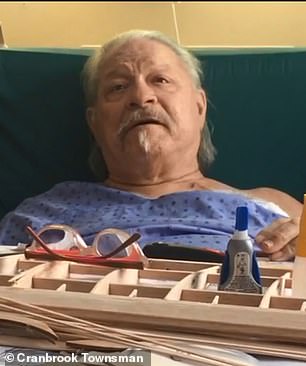 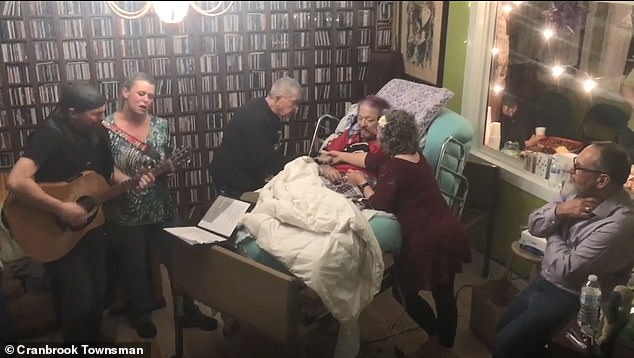 Around 50 of Dan’s family and friends attended the gathering, where people drank malt whiskey and smoked cigars as requested by Dan 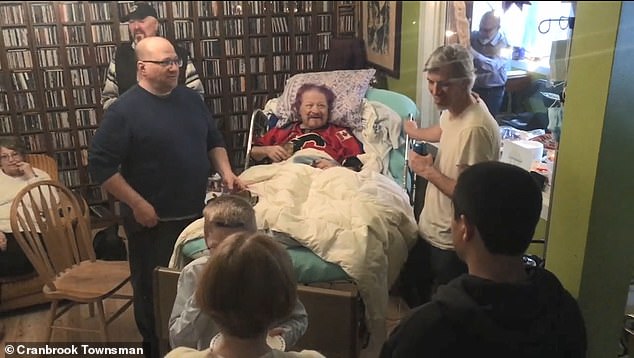 She said music was played an important part in the end-of-life celebration and he had even written 30 songs while he was in hospital.

Speaking after the party Stef said: ‘I don’t really feel loss, we don’t need any sorrow at this time and i don’t know if that sounds rude.

‘We had a really amazing relationship, if he had died in a way that we had no notion of it or by surprise then it would be a sorrowful thing. But I don’t think dying should be sorrowful.’

His friends, sister, son, daughter, grandchildren and some of his nurses all came to the party.

There was food, single malt whiskey and cigars that an old friend brought for Dan at his request. 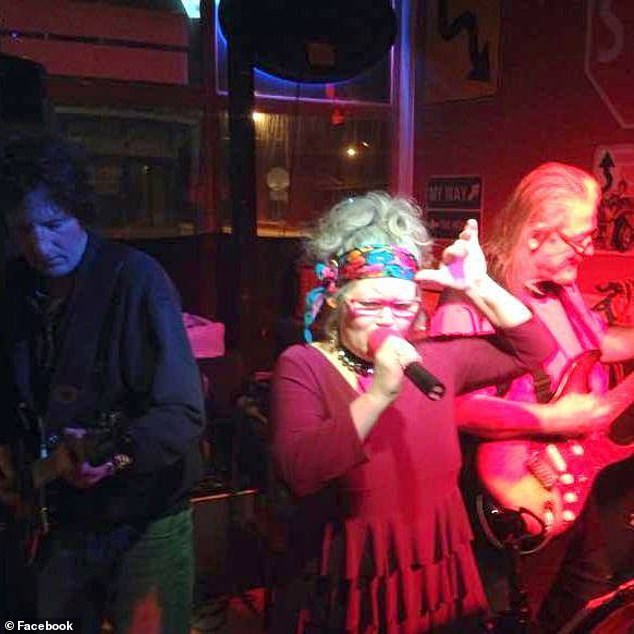 Stef Laramie, who is a singer, said she and her husband once had a Karaoke band called K-town and a five-piece rock band called Lulu and The Lazy Boys

‘It was just magical how everybody looked after each other. People would burst into tears sometimes and somebody would just be kind and give them a hug.

‘Some of the nurses came in and joined the party. Dan had an old buddy who brought some single malt whiskey and some cigars. That was something Dan wanted,’ Stef explained.

A friend of the couple performed a haunting rendition of Stairway to Heaven.

She added: ‘It was such a clean way to end life, everything got to be said and taken out of our hearts and talked about.’

Stef claimed she felt ‘present’ throughout the journey and she wanted to make sure that he had an appropriate send-off.

Towards the end of the night, a doctor and a nurse arrived to assist with his death. 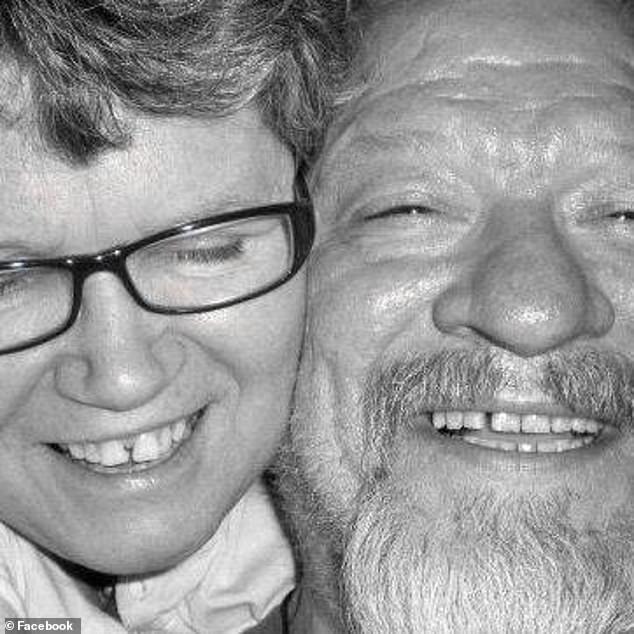 Once Dan signed the papers and said he was ready, his family gathered at his bedside.

Stef explained: ‘You could see sort of an energy in the room where people could feel that it was time.

‘It was a really blessed evening. It happened a little later than we had planned so you could feel people getting a little bit restless.

‘The doctor came down, he was beside us and the nurse, the pair of them brought such light and beauty into this assistance.

‘I can’t even tell you how beautiful the smile in his eyes was, he was so ready and it felt like everything we had talked about , that we planned about all these people made it the perfect exit.’

She said after he received three injections, his eyes closed and she gave him a kiss.

Stef said that Dan wanted a round of applause as he died so everybody cheered for him.

‘The release of all that energy, it was really great. There were a lot of things that were very comforting and Dan just loved every minute of it.’