A record-breaking 28 trillion tonnes of ice — enough to cover the whole of the UK in a sheet over 300 feet thick — melted from the face of the Earth between 1994–2017.

Researchers from the University of Leeds carried out the first ever global survey of ice loss using data collected from satellites orbiting our planet.

The team found that the annual rate of ice loss increased by 65 per cent over the 23-year period — going from 0.8 trillion tons in the nineties up to 1.3 trillion tons.

The accelerating melt — which continues to get worse — has been driven largely by steep increases in losses from the polar ice sheets in Antarctica and Greenland.

Ice melt serves to raise sea levels across the globe, increases the risk of flooding to coastal communities and endangers natural habitats that wildlife depend upon.

A record-breaking 28 trillion tonnes of ice — enough to cover the whole of the UK in a sheet over 300 feet thick — melted from the face of the Earth between 1994–2017. Pictured, a stream of meltwater cuts through the ice sheet in Greenland, one of the areas examined in the study 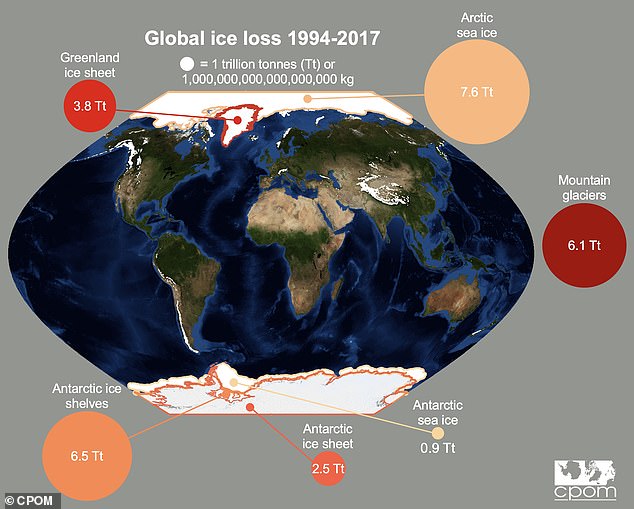 Researchers from the University of Leeds carried out the first ever global survey of ice loss using data collected from satellites orbiting our planet, the results of which are pictured

‘Although every region we studied lost ice, losses from the Antarctic and Greenland ice sheets have accelerated the most,’ said paper author and earth scientist Thomas Slater, of the University of Leeds.

The ice sheets are now following the worst-case climate warming scenarios set out by the Intergovernmental Panel on Climate Change.’

‘Sea-level rise on this scale will have very serious impacts on coastal communities this century.’

‘Over the past three decades there’s been a huge international effort to understand what’s happening to individual components in Earth’s ice system,’ he added.

This endeavour, he explained, has been ‘revolutionised by satellites which allow us to routinely monitor the vast and inhospitable regions where ice can be found.’

‘Our study is the first to combine these efforts and look at all the ice that is being lost from the entire planet.’

According to Dr Slater and colleagues, the rising ice loss is due to the warming of Earth’s atmosphere and oceans — which have, respectively, seen temperature increases of 0.5°F (0.26°C) and 0.2°F (0.12°C) each decade since the 1980s.

The majority — 68 per cent — of global ice loss was driven by atmospheric melting, while the remaining 32 per cent of losses have been driven by oceanic melting.

The team’s survey covered 215,000 mountain glaciers spread around the planet, the polar ice sheets in Greenland and Antarctica, the ice shelves floating around Antarctica and sea ice drifting in the Arctic and Southern Oceans.

‘One of the key roles of Arctic sea ice is to reflect solar radiation back into space which helps keep the Arctic cool.’

‘As the sea ice shrinks, more solar energy is being absorbed by the oceans and atmosphere, causing the Arctic to warm faster than anywhere else on the planet.

‘Not only is this speeding up sea ice melt, it’s also exacerbating the melting of glaciers and ice sheets which causes sea levels to rise.’ 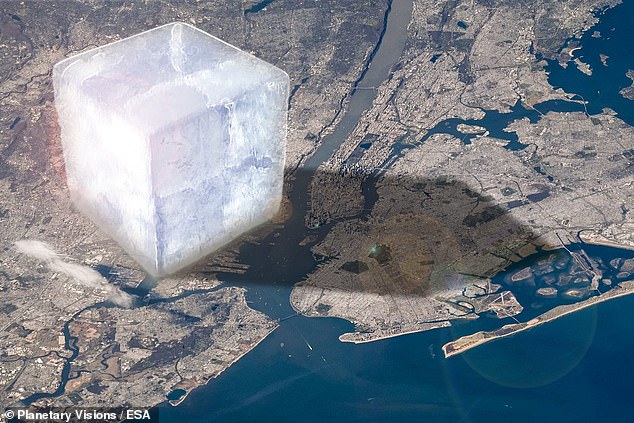 The accelerating melt — which continues to get worse — has been driven largely by steep increases in losses from the polar ice sheets in Antarctica and Greenland. Pictured: an artist’s impression of a 1 trillion tonne cube of ice — each face 10 km wide — looming over New York City. The Earth’s glaciers and ice sheets have lost 28 times this amount since the early nineties

Experts have estimated that for every centimetre of sea level rise, approximately a million people are placed at risk of being displaced from their low-lying homelands.

Despite storing only one per cent of the Earth’s total ice volume, glaciers were found to have contributed to almost a quarter of the global ice losses over the study period — with all glacier regions around the world losing ice.

‘As well as contributing to global mean sea level rise, mountain glaciers are also critical as a freshwater resource for local communities,’ said paper author and climate scientist Inès Otosaka, also of the University of Leeds.

‘The retreat of glaciers around the world is therefore of crucial importance at both local and global scales.’

The full findings of the study were published in the journal The Cryosphere. 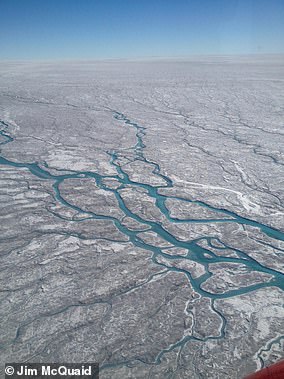 Phosphorus dust blowing across the Greenland ice sheet may be fuelling ever-larger blooms of microscopic algae that lower the reflectiveness — or ‘albedo’ — of the ice, resulting in faster melting, a study has found.

Researchers led from the University of Leeds took samples from the southwestern margin of the Greenland ice sheet over a two-year period.

The team found that phosphorus in surface dust — contained within a mineral known as ‘hydroxylapatite’ is a vital nutrient for the algal growth and is responsible for a low-albedo band of ice dubbed ‘the Dark Zone’.

The melt season in the Dark Zone, the team explained, has been occurring earlier and lasting longer each year since the turn of the millennium.

The hydroxylapatite is being blown out onto the ice from local rock outcrops, the researchers explained — a trend which will increase with climate change as dryland areas in the northern latitudes become drier still.

‘The photosynthesis rate of the ice algae improved significantly when we provided them with a source of phosphorus,’ said paper author and geomicrobiologist Jenine McCutcheon.

‘Our mineralogy results revealed that the phosphorus used by ice algae may be coming from the hydroxylapatite we identified in the mineral dust.’

‘It’s important to understand the controls on algal growth because of their role in ice sheet darkening.’

‘Although algal blooms can cover up to 78 per cent of the bare ice surfaces in the Dark Zone, their abundance and size can vary greatly over time.’

‘From one season to the next, algal blooms may change and vary in intensity, making them difficult to model year-to-year.’

‘The findings of this study will improve how we predict where algal blooms will happen in the future, and help us gain a better understanding of their role in ice sheet albedo reduction and enhanced melting.’