Easter eggs and hunts could cause life-threatening asthma attacks, a charity has warned.

Indulging in chocolate eggs, hot cross buns and Simnel cake may cause asthmatics’ airways to tighten if they are allergic to wheat, eggs, nuts or dairy, claims Asthma UK.

Easter egg hunts could also trigger an attack in those who have hay fever, the charity adds.

Around 4.3 million of the 5.4 million people with asthma in the UK find their symptoms, such as shortness of breath and chest pain, are triggered by pollen, which is released by birch, willow and elm at this time of year.

One asthma sufferer’s symptoms have been so severe over previous Easter periods they have landed her in hospital 10 times.

Dr Andy Whittamore, clinical lead at Asthma UK and a practicing GP, said: ‘Lots of people love getting involved in traditional Easter activities, chomping on chocolate eggs and racing around their garden or local park on an Easter egg hunt, but Easter could be deadly for some people with asthma.’

An asthma attack occurs every 10 seconds in the UK, killing three people a day. Around 700 people are expected to be admitted to hospital over the Easter bank holiday weekend with symptoms.

Easter eggs and hunts could cause life-threatening asthma attacks, a charity warns (stock)

Young children who grow up exposed to air pollution are more likely to develop asthma, research suggested in December 2017.

A mix of dust, sand and non-exhaust tailpipe emissions, known as coarse particulate matter, increases youngsters under 11’s risk of the lung condition by 1.3 per cent, a study by The Johns Hopkins University found.

Air pollution also raises their risk of visiting the emergency room due to their asthma by 3.3 per cent and being hospitalised with the condition by 4.5 per cent, the research adds.

Young children are thought to be more at risk due to them typically spending a lot of time outdoors and being vulnerable to air pollution due to their immature lungs, according to the researchers.

Around 7.1 million children in the US have asthma, making it the most common chronic childhood illness.

Approximately 1.1 million youngsters are affected in the UK.

The researchers analysed the asthma diagnoses and treatment data of 7,810,025 children aged between five and 20 years old living in 34 states between 2009 and 2010.

They estimated levels of coarse particulate matter in each zip code using information from the EPA’s Air Quality System database from 2009 to 2010.

Lyn Kendall, 61, a psychologist from Coventry, has been hospitalised 10 times over previous Easter periods due to her asthma.

She said: ‘Most people love Easter, but for me it’s a nightmare.

‘Tree pollen, which I have a severe allergy to, comes out around Easter time and then triggers an asthma attack.

‘If I popped to the shops, one minute I’d be fine and the next my face would swell up and I’d end up on the ground, struggling to breathe.

‘Family would say there was no point buying Easter eggs as I’d always be in hospital so couldn’t enjoy them.

She added: ‘Now I’ve identified tree pollen as my trigger, I make sure I take my antihistamines as prescribed as soon as I see the catkins coming out and I take my preventer inhaler.

‘I’m determined to enjoy Easter, so even if I can’t go outside I’ll invite my family round for a meal as I love to cook.

‘My advice to people with asthma is to identify your triggers and take your asthma meds so you can enjoy Easter.’

How to reduce the risk of an attack

Speaking of how people can reduce their risk of an asthma attack, Dr Whittamore said: ‘If people take precautions, making sure they take their brown preventer inhaler and having their blue reliever inhaler with them, they can still enjoy Easter.

‘We advise people with an allergy to ingredients in Easter eggs or hot cross buns to avoid the food completely, recognise the symptoms of a reaction and know what to do if it happens.

‘People can seek out “free from” alternatives and should read all food labels carefully if they’re unsure.

‘Many people may not realise that trees begin releasing their pollen as early as January, so they may be caught out with hay fever symptoms over the Easter weekend.

‘Taking hay fever medicines, which include antihistamines as well as nasal steroid sprays, not only stops people having hay fever symptoms but could also cut their risk of an asthma attack.’

Asthma UK is also advising sufferers of the condition to ensure they take their preventer inhaler as prescribed to reduce their risk of an attack, as well as carrying their inhaler with them at all times. 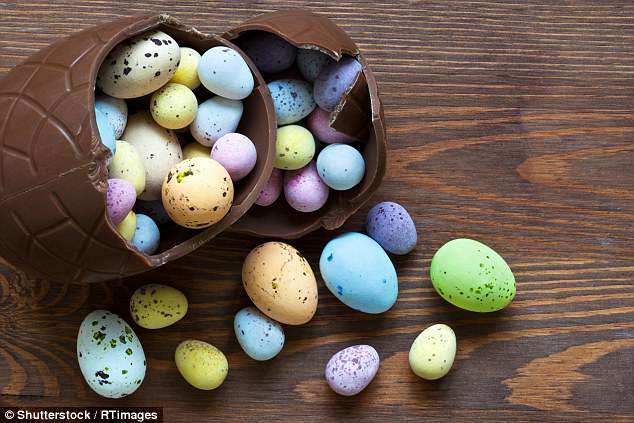 This comes after an expert warned earlier this month mini Easter eggs are a life-threatening choking hazard.

In a post shared hundreds of times on Facebook, nurse and first-aid trainer Emma Hammett, warns such treats are the same size as children’s airways.

Babies and young children can actually choke on anything small enough to fit through a toilet roll, she adds, resulting in them struggling to breath and being unable to talk or cry.

Although mini Easter eggs’ manufacturers state they are unsuitable for youngsters under four on their packagings, many parents are oblivious to warning.

Ms Hammett advises parents reduce their children’s choking risk by buying them larger, hollow chocolate eggs, as well as keeping an eye on them while they indulge this coming Sunday.