Despite its name, Hide lives very much in plain sight. Well, once you’ve got past the front door, that is, a vast, monolithic chunk of artfully aged timber that seems more suited to keeping out marauding hordes than in welcoming well-heeled eaters. Sat halfway down Piccadilly, it gazes out over Green Park, the view expansively (and expensively) framed behind five immense, triple-glazed picture windows, two on the ground floor (the à la carte Ground), three upstairs (which is set menu only).

Sitting in Ground, you’re at eye level to the street, which gives the feeling of being a great ape in a small zoo. Businessmen, buskers, slack-jawed tourists and tramps all pass by, occasionally gawping in, while buses belch fumes, horns honk and black cab drivers curse the usual plague of Ubers. Anthropologists and sociologists will have a ball. Those in search of privacy, a little less so. 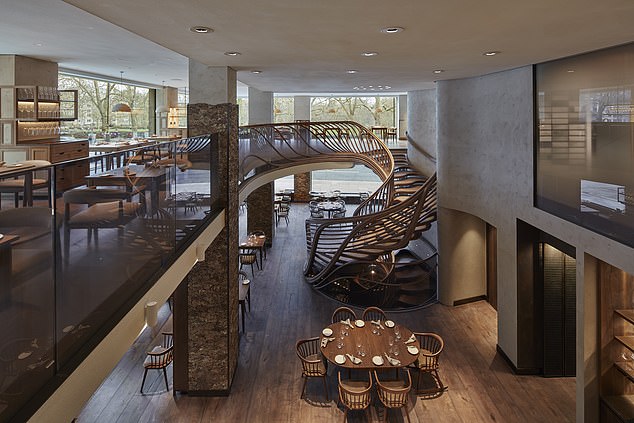 Hide in Piccadilly. I admire the place but didn’t fall in love. See it as a thrilling one-night stand

Everything here is big: prices; three floors and 174 covers; the main room a place where A Midsummer Night’s Dream (acres of blond wood, walls, segments of log and pillars covered in bark) meets Uday Hussein’s bathroom (copper glows, glasses gleam); the staircase, a winding, whimsical, sinuous wooden structure that flows between floors, and looks like the digestive tract of some great mythical whale. I mean that as a compliment. Plus a lift large enough to contain a car. Seriously. For those all too regular moments where you just can’t be assed to climb the stairs.

There’s a wine list, so immense that mere paper cannot contain it. Nope, you’ll find them all listed on your very own iPad. Four hundred and fifty bottles kept on site, and more than 6,000 more at Hedonism, a sort of Balenciaga of booze, which is also owned by the man behind all this, Russian mobile phone multi-Billy-goat magnate Yevgeny Chichvarkin. Even the opening hours operate on a grand level, 7.30 in the morning until 1 at night.

And it would be all too easy to sneer. And flick the fingers at another vast, overpriced temple to Russian-funded, cash-bloated excess, designed exclusively for people with the sort of expense accounts that take two people to lift. And it’s not without a sprinkle of silliness. Waitresses are clad in the national dress of Ruritania, all beige and puffy-sleeved. Although the service is as slick as it is sublime: this is an exceptionally well-drilled front of house. Tables come with built-in phone-chargers. Plus the inevitable and interminable over-explanation of dishes that’s endemic in places like this.

But we’re here for the food. Ollie Dabbous’s food to be precise. Because Dabbous is up there with the best, an indecently talented chef who manages to combine the earthy with the light and lithe, creating dishes that linger on the palate long after the plates have been cleared. There’s a delicacy to his cooking, a fundamental confidence, and an innate culinary intelligence that never feels the need to show off. We sit in Ground, and eat gloriously puffy flatbreads, with a fine charcoal char, slathered with an intensely umami-soaked mushroom paste, and lavished with fresh sliced ceps. Another is topped with home-made ricotta so light we fear it might float up those stairs. And strewn with a wild garden of fresh mint wild rocket and flowers.

Beef tartare, a beautifully seasoned splodge with dark tobacco notes, is wrapped in nasturtium leaves, with flowers mixed in, like a taco made by Titania. It’s at once blissfully fresh and seriously rich. I have immaculate red prawns, with the luscious creaminess of the newly caught, swimming in a pure, cool, limpid, herb-spiked broth. A scattering of Exmoor caviar (a rather mean amount for the £15 supplement) subtly seasons the dish. Ann, the queen of travel PR, and a woman not easily impressed, has candy-striped beetroot, a dish that seems to have escaped from the gold-medal winners at the Chelsea Flower Show. It tastes as sexy as it looks, all bite and early summer allure. She grins her approval. 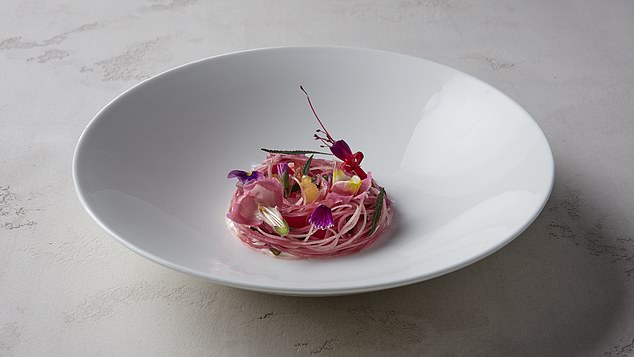 Beetroot, marigold, orange and pistachio. Hide’s fit-out may not be to all tastes, but the cooking is mainly sensational

As she does after her steamed turbot, magnificently cooked, swimming in an old-fashioned sauce made from its bones, artfully spiked with lemon verbena. I eat a curl of charred octopus tentacle, tangled with still more greenery and flowers, the richness of the soft flesh tempered by peeled halves of fragrant muscatel grapes. There’s a sonorous white miso dip that further teases out the cephalopod’s sweetness.

Hide’s fit-out may not be to all tastes, but the cooking is mainly sensational. We finish with a hissing, simmering, bubbling acorn cake (which tastes like a slightly nutty sponge) that’s drenched in a jug of boozy smoked caramel sauce. Dabbous has no problem switching from elegantly exquisite to old-fashioned fun.

As much, though, as the cooking dazzles (along with the service), I’m not sure I’d go back. Because for all its polish and shine, Hide lacks heart. Meaning I admire the place but didn’t fall in love. See it as a thrilling one-night stand. Go once. Have a ball. Bow down to the brilliant Dabbous and his team. Then, suitably excited, spent and exhausted, return to the real world. And the warm embrace of those restaurants to which you eternally return.

Off to the Ardeche with my family. A decent steak frites en route, at a place that was part butcher, part restaurant.

Back to Auberge du Banne for more of the same.