Actor Eddie Redmayne gave a reading at the funeral of Professor Stephen Hawking, as well-wishers lined the streets and applause broke out as the renowned physicist’s coffin was carried into the church.

Redmayne, who played the role of Professor Stephen Hawking in the 2014 biographical drama The Theory of Everything, was among 500 guests invited to the University Church of St Mary the Great in Cambridge.

He gave a biblical reading at the service, and Astronomer Royal Martin Rees also spoke.

Jane Hawking, the first wife of Professor Stephen Hawking and their son Timothy (right), leave following his funeral at University Church of St Mary the Great in Cambridge (Joe Giddens/PA)

Model and Cambridge University graduate Lily Cole, Queen guitarist and astrophysicist Brian May and comedian Dara O Briain, who made a documentary about Prof Hawking, were among those seen arriving to
the funeral.

SpaceX CEO Elon Musk and playwright Alan Bennett had also been on the guest list.

The church bell tolled 76 times, once for each year of Prof Hawking’s life, as the solid oak coffin adorned with floral tributes arrived in a hearse.

A round of applause spontaneously broke out as Prof Hawking’s coffin was carried into the church by six porters from Cambridge University’s Gonville and Caius College, where he was a fellow for 52 years.

Family members of the cosmologist, including his three children a Lucy, Robert and Tim, followed the coffin into the church. 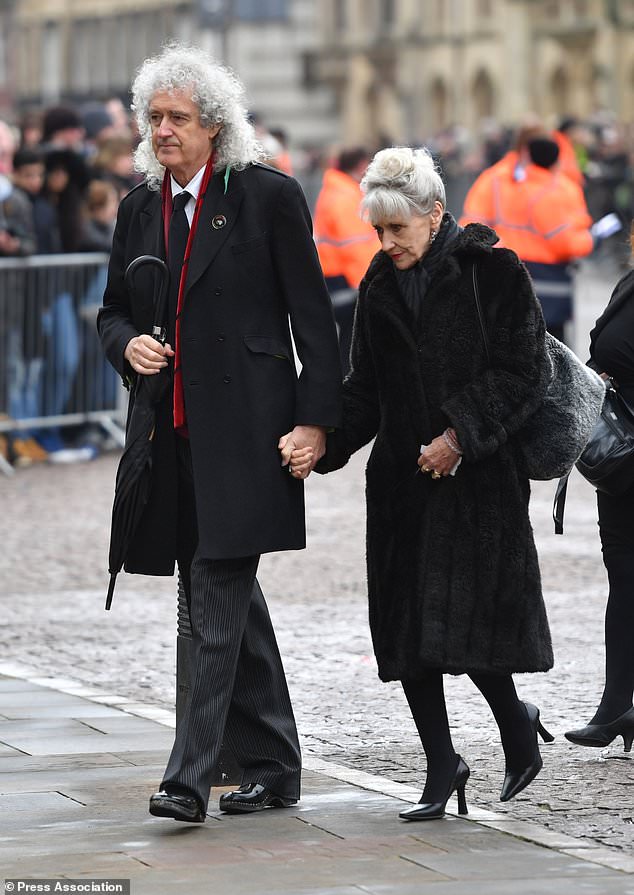 In a statement released ahead of Saturday’s service they said they chose to hold the funeral “in the city that he loved so much and which loved him”.

Robert Hawking, who is Prof Hawking’s eldest child, delivered a eulogy at the service.

Prof Hawking died peacefully at his Cambridge home on March 14 at the age of 76.

The cosmologist had been diagnosed with motor neurone disease in his 20s.

The church where Saturday’s private funeral service was held is near to Gonville and Caius College.

The funeral was followed by a private reception at Trinity College.

Prof Hawking’s ashes will be interred close to the remains of Sir Isaac Newton in Westminster Abbey on June 15.