While Prince Harry and Meghan have spent £11 million on a mansion with nine bedrooms and 16 bathrooms (right), his ex, Cressida Bonas, is keen to make the point that she’s happy with a simpler life.

The 31-year-old, who married her own Harry, Wentworth-Stanley, last month, shared this snap (left) of herself sitting on the steps of a rustic bungalow.

‘Happiness in the woods,’ she wrote in the caption online.

Cressie is thought to be on honeymoon in the Mediterranean but her husband will have no trouble finding her a more impressive pad back home: he works as an upmarket estate agent. 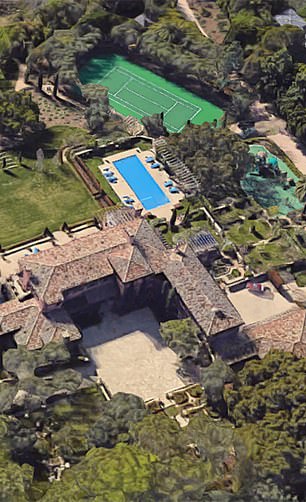 The 31-year-old, who married her own Harry, Wentworth-Stanley, last month, shared this snap (left) of herself sitting on the steps of a rustic bungalow. While Prince Harry and Meghan have spent £11 million on a mansion with nine bedrooms and 16 bathrooms (right), his ex, Cressida Bonas, is keen to make the point that she’s happy with a simpler life

Cressida famously dated Prince Harry for three years until their split in 2014, reportedly because she was exhausted by the media scrutiny.

Her new husband Harry, 35, is the son of the Marchioness of Milford Haven, at the exclusive Cowdray Park, in Midhurst, West Sussex.

Their intimate nuptials sit in stark contrast to the media furore surrounding Cressida’s royal ex, 35, and his wife Meghan Markle, 38, and the publication of their explosive biography, Finding Freedom, which lays bare their rift with the Royal Family.

A friend of the bride and groom told MailOnline Cressida wanted to marry in private because she was aware Prince Harry was in the news last month due to the explosive new biography and wanted to avoid being in the spotlight. 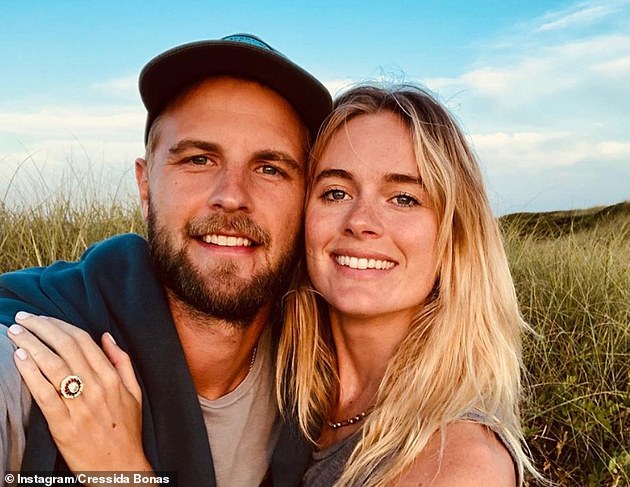 The socialite announced her engagement to the estate agent in August last year, popping the question with a stunning ruby ring during a trip to the US

Cressida Bonas, 31, who famously dated the Duke of Sussex , 35, for three years, exchanged vows with Harry Wentworth-Stanley, the estate agent son of the Marchioness of Milford Haven, over the weekend at the exclusive Cowdray Park, in Midhurst, West Sussex

The ‘very different’ approaches to publicity has prompted speculation from royal fans over what life might have been like if Harry had married Cressida.

Prince Harry and Cressida remain on good terms and socialise in similar circles, with Princess Eugenie, who introduced the couple, among Cressida’s closest friends.

Cressida even attended her ex-boyfriend’s wedding to Meghan Markle in May 2018.

A family member told MailOnline the just 30 of Cressida and Harry’s closest family and friends attended the ceremony, in keeping with the government’s Covid-19 restrictions.

‘Cressida looked stunning and was radiant. We are just all so happy for them and it was a great day but they did request that no one talks about it.’ 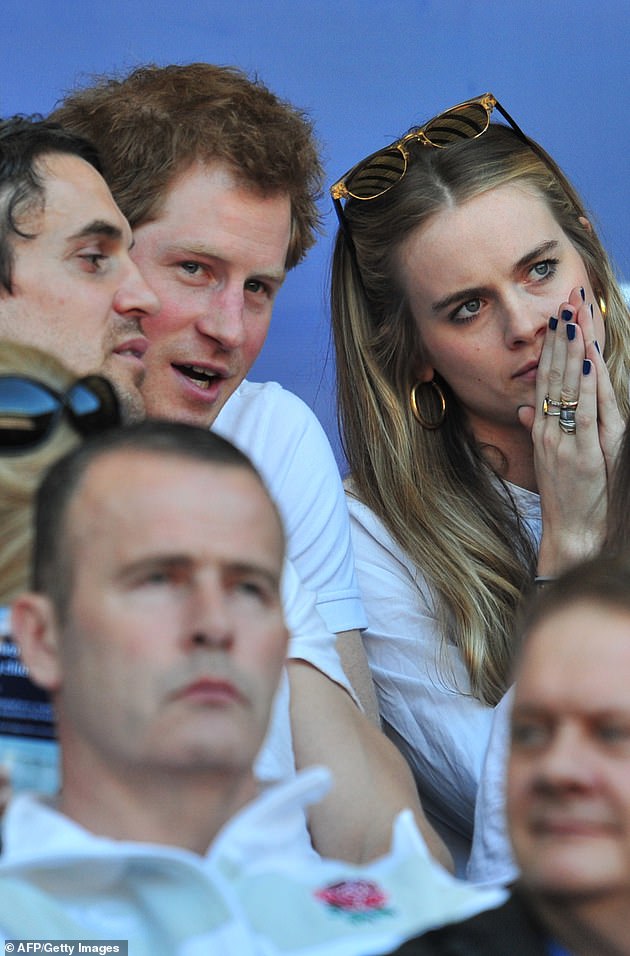 Cressida and Prince Harry broke up in 2015 after she was said to have struggled with the pressure of royal life during her romance with the Queen’s grandson. Pictured, in March 2014

A friend added: ‘Cressida did not want a big fuss, and did not want others to talk about it. You most certainly will not be seeing her wedding in Hello magazine. She is also was aware that [Prince] Harry is in the headlines and knew the attention her wedding would attract if it leaked out.’

The bride’s brother, Jacobi Anstruther-Gough-Calthorpe, shared an Instagram photo of the happy couple ‘riding off into their beautiful future’ on horseback.

Cressida is seen with her blonde hair pulled back into a casual updo and her simple white dress falling above her knees.

The stunning 19th century Cowdray House can be rented out for weddings of up to 150 people.

The estate is owned by Viscount Cowdray, a close friend of the groom’s stepfather and mother, the Marquess and Marchioness of Milford Haven whose own 1,000 acre estate, Great Trippetts, is less than 10 miles away.

The Marchioness, Clare Mountbatten, is also an avid polo player and regular at Cowdray Park. Cressida has previously been photographed at the polo park while a guest at charity events. 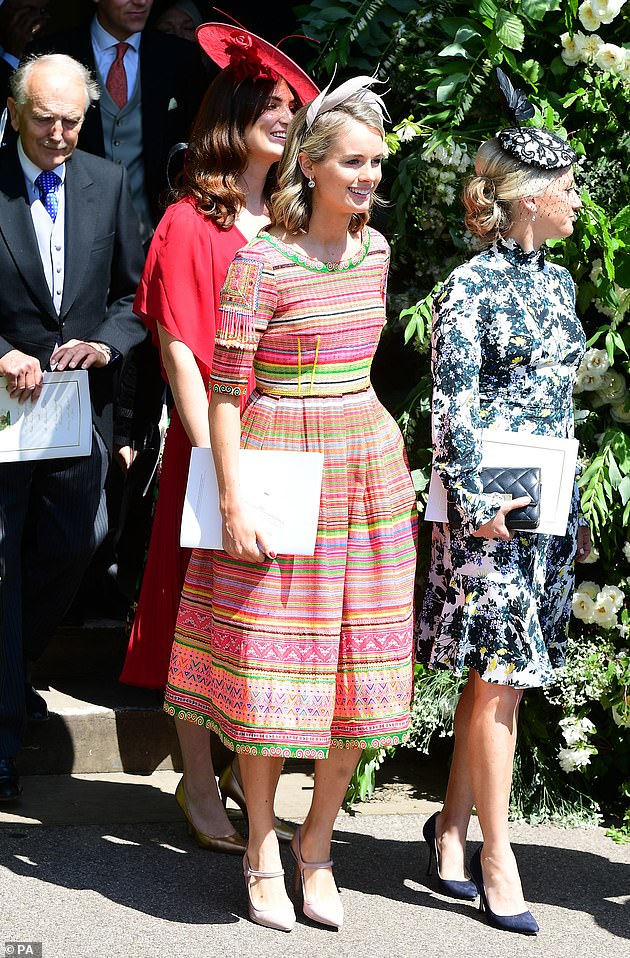 The actress has previously revealed how her ‘dream day’ was a small, non-traditional wedding not in a church – the complete opposite to her ex-boyfriend’s nuptials. Pictured: Cressida at Prince Harry’s wedding to Meghan Markle in May 2018

It is not known who attended the wedding but the couple both come from large families that would quickly make up the 30 people maximum.

Cressida is the only child of 1960s ‘It’ Girl Lady Mary-Gaye Curzon and her third husband, Old Harrovian entrepreneur Jeffrey Bonas.

The OTHER Harry! Who is Cressida Bonas’ new well-heeled husband Harry Wentworth-Stanley? 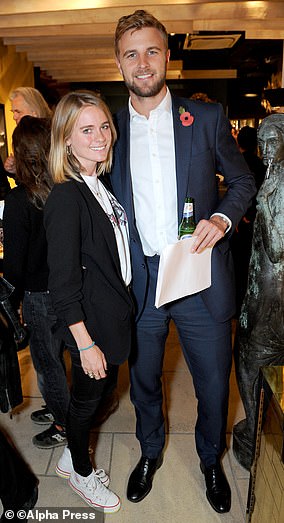 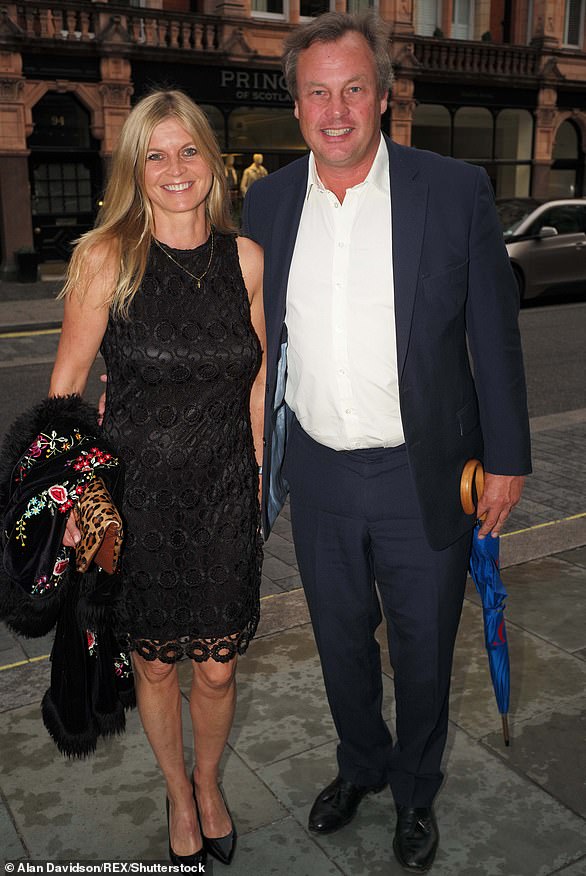 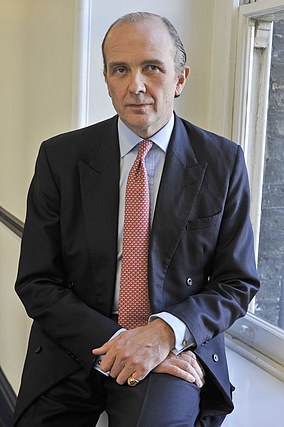 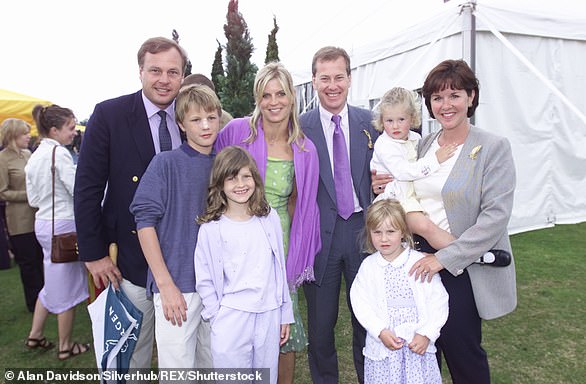