Edward Cairney and Avril Jones, the killer ‘carers’ of Margaret Fleming, are jailed for life

Teenager Margaret Fleming, who had learning difficulties, was sent to live with a couple who were friends of her father after his death. But they killed her so they continue to claim her benefits

A couple who killed a vulnerable women then claimed she was alive for nearly two decades so they could claim £182,000 in benefits have been jailed for life.

Margaret Fleming suffered a cruel death at the hands of Edward Cairney, 77, and Avril Jones, 59, at the pair’s home in Inverkip in western Scotland.

The pair were handed minimum 14-year jail terms in Glasgow today, meaning Cairney will be at least 93 if he ever gets out.

Authorities still don’t know exactly when Miss Fleming died. It is thought to be between December 1999 and January 2000, when she was 19.

Jailing them today, Judge Lord Matthews said they murdered her and covered it up for ‘financial motives’.

He added: ‘Precisely how [the murder] was accomplished and any other circumstances was not disclosed in evidence and only you two know the truth. Only you two know where her remains are.

‘That remains a source of immense grief as far as her mother is concerned.’

The pair, who called themselves carers, devised a web of lies to claim she was still alive, so they could cash in on her benefits.

But their deceit unravelled after council staff raised the alarm about a scam in which Jones fleeced vulnerable Miss Fleming out of nearly £200,000.

Speaking after the couple were convicted, Detective Superintendent Paul Livingstone, who led the inquiry, said Miss Fleming’s last days must have been a ‘living hell’.

He urged Cairney and Jones to tell police how she died and where her body is. 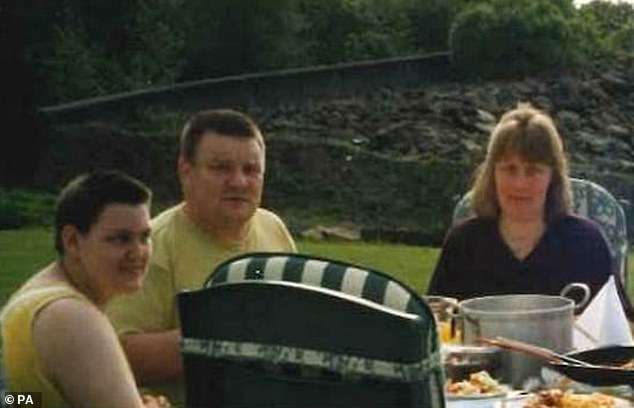 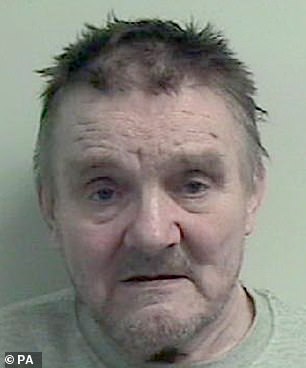 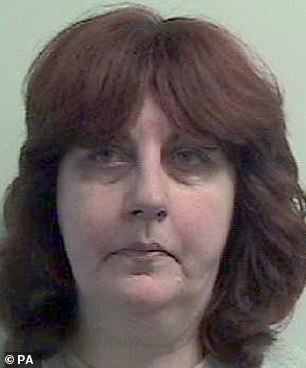 Edward Cairney, 77, and Avril Jones, 59, have now been jailed for life for murder

‘There’s only two people that know that – that is Edward Cairney and Avril Jones… now’s the time to do the honest thing, do the right thing, and tell me what happened to Margaret,’ Mr Livingstone said.

During the time Miss Fleming was missing, ex-marine engineer Cairney made a series of bizarre allegations, including a claim that Miss Fleming had become a gang master and was a drug dealer.

This was despite her having learning difficulties and could not live on her own.

Meanwhile, Jones continued to rake in £182,000 of benefits for her.

A missing person’s inquiry in 2016 later turned into a huge murder probe, leading to the couple being arrested for killing Miss Fleming.

Cairney and Jones continued to protest their innocence during a seven-week trial at the High Court in Glasgow. But prosecutors told jurors that the pair had been motivated by ‘greed, arrogance and lies’. 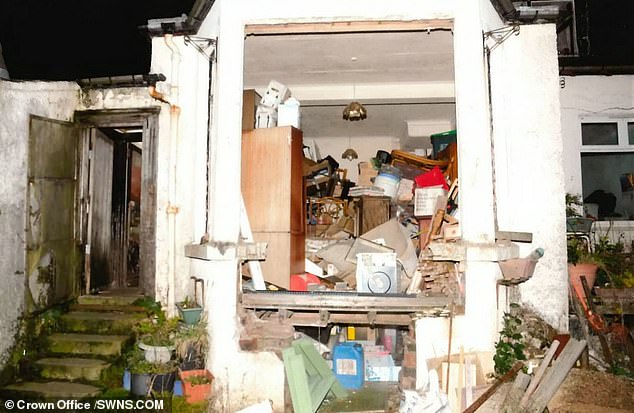 Following their conviction last month, Cairney – who had been on bail – was taken to the cells in his wheelchair, while Jones needed her crutches as she was led away by guards.

The trial heard that Miss Fleming had been a teenager when she first moved in with the couple.

Her father, Derek Fleming, was so concerned about her future that he stipulated in his will she should be cared for by Cairney and Jones, believing she would be safe living with his friends.

But the pair murdered their charge and covered up their crime for almost 20 years.

It emerged that when Miss Fleming came to live with them in 1997 the mortgage at their home, Seacroft, in Inverkip, was thousands of pounds in arrears. Prosecutors believe £4,000 left to Miss Fleming by her father and grandparents was used to pay off part of the arrears.

Over the years, Miss Fleming’s benefits money, which was claimed by Jones, was used to pay household bills. 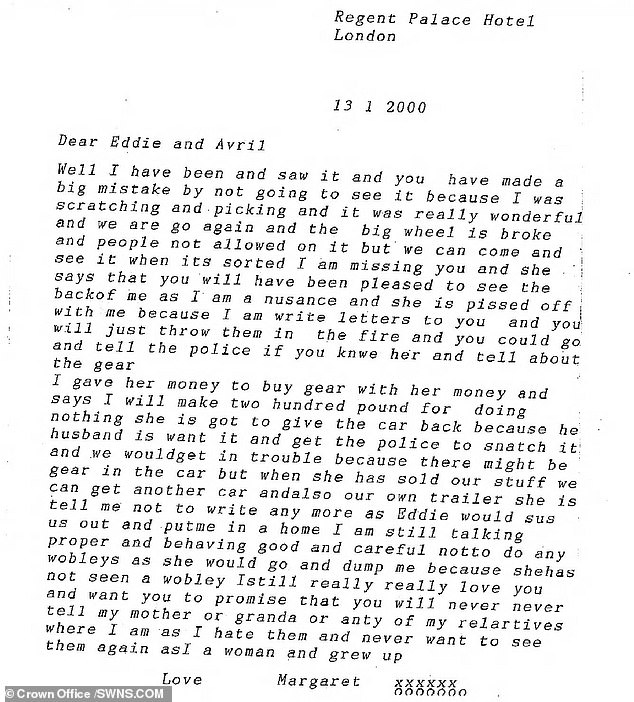 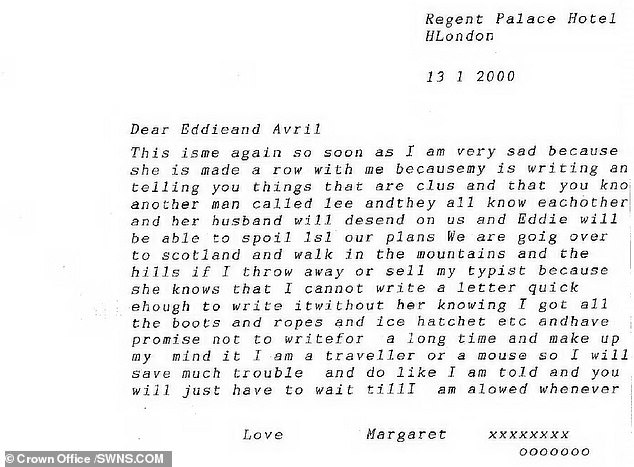 The couple produced fake letters after Margaret disappeared, suggesting she was in London

Prosecutor Iain McSporran, QC, said: ‘Their motive for inviting Margaret Fleming into their home is likely to be financial, rather than altruistic.’ After the murder, the pair began preparing an elaborate cover story.

Jones told her mother Miss Fleming had left on January 5, 2000, with travellers.

Her murder might never have been uncovered if it had not been for a change in benefits from disability living allowance to personal independence payment, and the need to fill in new claim forms.

When Jones made an outrageous benefits claim on behalf of Miss Fleming the spotlight was turned on her carers.

Benefits staff contacted Inverclyde social work department, which then called in police in 2016.

A murder investigation began and the back garden at Seacroft was searched for signs of a body. All police found were 298 fragments of burned bone, too small to identify as human.

Regarding Miss Fleming’s ordeal, Mr Livingstone said: ‘She was subjected to daily punishment including being tied up, having her hair cut short and deprived of food. She was subjected to what can only be described as horrific living conditions.’ He said that for her killers to ‘continue the charade for all these years is absolutely abhorrent’, adding: ‘We will never know how Margaret was killed. What we do know is that she lived her last days in what can only be described as a living hell.

‘She must have felt she was alone in the world with no one coming to help her, which is absolutely heartbreaking.’ Lord Matthews deferred sentencing until July 17, pending reports. He told Cairney and Jones: ‘You have been convicted of the murder of Margaret Fleming. The only sentence the court can impose is one of life imprisonment.

‘However, as part of that I have to fix a period which must pass before you are eligible to apply for parole.’

Missing for 20 years: The history of the Margaret Fleming murder case

October 1995: Margaret Fleming’s father dies. No one in her family volunteers to look after her, so she moves into Edward Cairney and Avril Jones’ home in Seacroft, Inverkip, Renfrewshire

December 18, 1999, and January 5, 2000: At some point between these dates, Ms Fleming is murdered by her two carers. It is not known where the killing took place, or what method was used.

October 28, 2016: Margaret Fleming is reported missing by her two carers from her home in Main Road, Inverkip, Inverclyde.

December 12, 2016: Police say they will be carrying out excavation work in the garden and are ‘carefully sifting through the house’ where Ms Fleming was believed to live with her two carers. Specialist search teams including the police helicopter, dog unit and dive teams had also been searching across Inverclyde.

December 17, 2016: On the anniversary of the last independent sighting of Ms Fleming, which was at a family gathering on December 17 1999, police say it is possible she ‘may have come to some harm’ and say their priority is establishing her movements and lifestyle from 1999 onwards.

April 28, 2017: Police say Ms Fleming’s disappearance may be down to ‘something more sinister’ as their search at the property concludes.

October 27, 2017: The pair appear at Greenock Sheriff Court charged with murder, abduction and assault, fraud and an attempt to defeat the ends of justice. They make no plea and are remanded in custody.

May 28, 2018: Cairney and Jones appear at the High Court in Livingston charged with abducting and murdering Ms Fleming and claiming £182,000 in benefits by fraud by pretending that she was still alive.

The pair’s lawyers enter not-guilty pleas to all the charges on their behalf during the first public hearing of the case.

September 26, 2018: The pair go on trial at the High Court in Glasgow accused of abducting and murdering Ms Fleming and fraudulently claiming £182,000 in benefits by pretending she was still alive.

April 25, 2019: Cairney and Jones go on trial at the High Court in Glasgow. They are accused of assaulting and murdering Ms Fleming and fraudulently claiming £182,000 in benefits by pretending she was alive.

June 14, 2019: Both accused are convicted of murder on a majority verdict.