Jeremy Corbyn failed to name Labour’s six tests for the Brexit deal in an embarrassing moment to end his party conference.

The Labour leader was challenged by the BBC’s Laura Kuenssberg to name the specific criteria the party has said it will measure the deal against.

Mr Corbyn has insisted he will order his MPs to vote down the deal if it fails to pass the tests, which include demands for the ‘exact same benefits’ as EU membership and a ‘strong and collaborative future relationship’ with Europe.

But he failed to name any of the tests, instead reeling off a list of separate demands – before awkwardly noting Kuenssberg had read them out so he didn’t have to.

Asked to spell out the tests, Mr Corbyn said: ‘We have made clear all along that our tests are on access to the market, are on a customs union, are on appropriate regulations that protect jobs, environment and consumer rights, and of course an end to the speculation on the danger of the border between Northern Ireland and the Republic.’

Kuenssberg told him: ‘Well the six tests you set out last year were actually about fair migration, strong collaboration with the EU, protecting security, delivering for the nations and regions, protecting workers’ rights, and having the same benefits as a single market.

‘That’s not precisely what you just outlined.’

Looking startled Mr Corbyn spluttered: ‘Well you’ve got the six tests there and you have read them out. You can see exactly what they are.’

What are Labour’s six tests for Brexit?

Labour has insisted it will only vote for a Brexit deal that meets its six tests – and Emily Thonberry claimed today the Chequers plan cannot do so.

1. Does it ensure a strong and collaborative future relationship with the EU?

2. Does it deliver the ‘exact same benefits’ as we currently have as members of the Single Market and Customs Union?

3. Does it ensure the fair management of migration in the interests of the economy and communities?

4. Does it defend rights and protections and prevent a race to the bottom?

5. Does it protect national security and our capacity to tackle cross-border crime?

6. Does it deliver for all regions and nations of the UK?

Mr Corbyn insisted Labour’s policy was about having a good trade relationship with the EU after Brexit that protects jobs and manufacturing.

Mr Corbyn’s gaffe comes at the end of a four-day conference which has been dominated by Brexit, but has seen the Labour leader and shadow chancellor John McDonnell set out a range of policies to reverse inequalities in wealth and economic power.

These have ranged from workers in the boardroom to employee shareholding funds and new taxes on second homes.

They sparked warnings from the CBI that Labour risks ‘cracking the foundations of this country’s prosperity’.

The shadow Brexit secretary Sir Keir Starmer yesterday said Labour’s analysis of the Chequers deal showed it would fail all six of the party’s ‘Brexit tests’.

And he said Labour would never back a so-called ‘blind Brexit’, in which the final terms of Britain’s future relationship with the EU are fudged until after it has left.

With Mrs May ruling out alternative plans, Labour now looks set to oppose any deal this autumn – even though that could leave the UK facing a no-deal Brexit, which the party says it opposes. 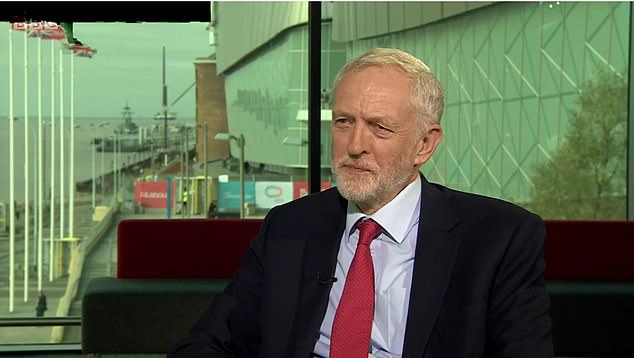