It’s grape Britain! English wine is booming – and this Herefordshire vineyard is perfect for a vintage break

By David Atkinson For The Daily Mail

Who would have thought our home-grown vino could go from quirky curiosity to booming industry? But the start of English Wine Week on June 18 will celebrate the 195 wineries that produce 9 million bottles of English wine per year.

Wine tourism here increased by 57 per cent in 2020, according to Wines of Great Britain, reflecting a surge in domestic visits to wineries and sales direct from the cellar door.

No one is quite suggesting that wine in places such as the Wye Valley in the Welsh Marches will ever compete with those of the Route des Grands Crus in Burgundy. But Jamie McIntyre, owner of the Wythall Estate Vineyard in rural Herefordshire, is poised, corkscrew in hand, to stress how the Wye Valley is ‘the perfect showcase for English wines’.

David Atkinson takes a tour around Wythall Estate Vineyard in rural Herefordshire, set in the grounds of a 16th-century family estate 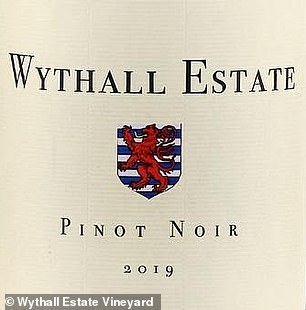 The vineyard, set in the grounds of the 16th-century family estate, is just two miles outside the historic market town of Ross-on-Wye. It grows four varieties, based on German stock, across its four acres, producing around 4,000 bottles per year. The Fruhburgunder grape produces Wythall’s Pinot Noir (£30 a bottle), which won Gold at the Independent English Wine Awards 2022.

Wild rabbits scamper through the vines and fallow deer emerge gingerly into the sunlight in the fields beyond as Jamie takes me on a tour.

‘The snobbery around English wine has gone. It’s no longer a blind spot for wine drinkers,’ he says as, afterwards, we taste the wines in the wood-panelled dining room, the glasses embossed with the family crest that dates from the 1500s. Jamie’s wines are served alongside pints of Butty Bach at The Hostelrie gastropub in the nearby village of Goodrich.

I match a dinner of monkfish and chorizo, followed by a plum compote with cold custard, with a glass of Jamie’s Sparkling Rose in the garden on a glorious early summer evening.

The next day, I hop over to the Coddington Vineyard which, along with Wythall and Frome Valley Vineyards, features in a series of new, self-guided wine walks of Herefordshire. I follow an undulating five-mile route from the Church of St James the Great in Colwall, then cross the Coddington Vineyard for lunch before climbing Oyster Hill, the Malvern Hills and the town of Ledbury on the horizon. 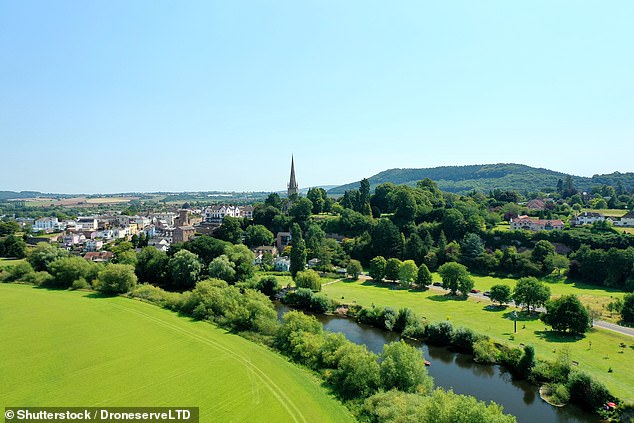 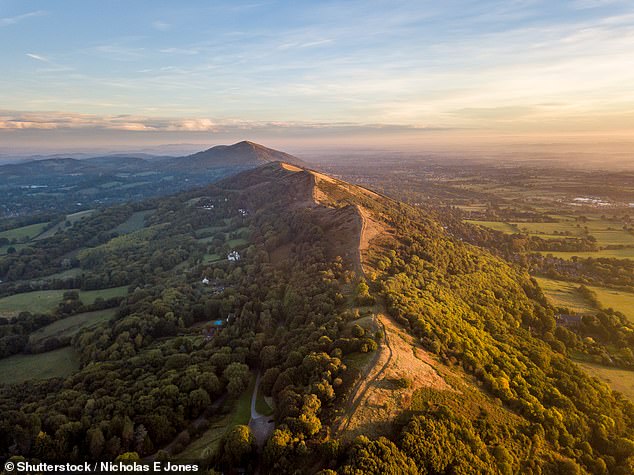 David climbs the Malvern Hills (pictured) on a self-guided walking tour of Herefordshire. The route takes him to the ‘mature’ winery of Coddington Vineyard

Coddington is one of the more mature wineries in the region, with three varieties, including two still whites and a sparkling Pinot Gris.

‘You only get good wine from good grapes,’ explains owner Peter Maiden, showing off his neatly pruned rows of Ortega, grapes derived from German Riesling stock.

‘There’s a lot of coordination between sugars and acid.’

The vines started to bud in May and will be in full flower for English Wine Week, with harvest time bringing a frenzy of activity to the tranquil rural site come October.

‘It’s a labour of love but very satisfying,’ says co-owner Sharon Maiden. ‘Given longer summers and milder winters, our wines increasingly benefit from a fruity, floral flavour that makes them uniquely English.’

It’s hard to disagree. And how better to celebrate the Queen’s Platinum Jubilee weekend than by raising a glass of new-generation English wine.