After Suki Thompson got divorced in 2008, her friend Sonya gave her a Bobbi Brown waterproof mascara. A lot of tears were being shed.

Within a year, Suki, then 43, was diagnosed with breast cancer. More tears, more waterproof mascara required.

Her doctors then threw this at her — she had the faulty version of the BRCA2 gene, the one that may have caused her breast cancer and meant she had a much higher risk of developing ovarian cancer, too.

This time, Sonya took her off for some retail therapy in Hermes to buy a silk scarf for when her hair would fall out following chemotherapy.

In ten years she has bought five more scarves — for in another blow, she survived breast cancer only to develop her first melanoma in 2013, her second in 2016 and her third in August last year.

The entrepreneur, now 52, hopes to buy more scarves if her current skin cancer treatment ‘cures’ her. 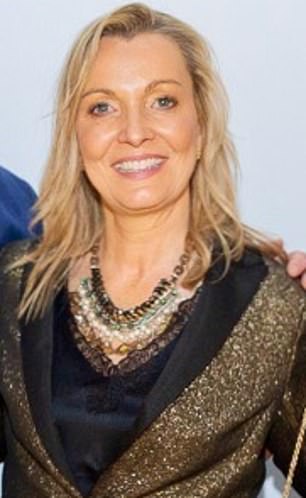 Suki, then 43, was diagnosed with breast cancer within a year of her divorce

Hope is the operative word. Because not only does she have the faulty BRCA2 gene, Suki also has a gene mutation known as BRAF, which is linked to half of melanoma cases and makes cells grow too fast. It’s as if the accelerator pedal is stuck down.

As a result, Suki has gone under the knife seven times over the past ten years — a biopsy of her lung, part of her thyroid removed, dealing with the three melanomas as well as lymph nodes in her leg, and finally her ovaries were removed.

She now pops five tablets a day, including dabrafenib and trametinib — some of the first oral cancer treatments for BRAF melanoma.

You may well think, how unlucky can one woman be? But Suki feels far from unlucky. Her latest marketing business and accompanying book is called Let’s Reset, its mission being to improve mental health support at work and avoid all the crying that goes on in loos. Studies have shown that if employers support wellness, both physical and mental, productivity goes up.

Research from the charity Mind also shows that 52 per cent of us experience mental health problems at work, yet only half feel comfortable to disclose this, with poor mental health costing the UK economy more than £74 billion a year.

At Let’s Reset, all employees have a one-to-one mentoring and a counselling session on a quarterly basis. Its consultant psychologist, Vanessa King, says: ‘When people have better wellbeing they are more resilient, more likely to take care of themselves and consequently live longer. Organisations that put wellbeing at their heart outperform others.’ 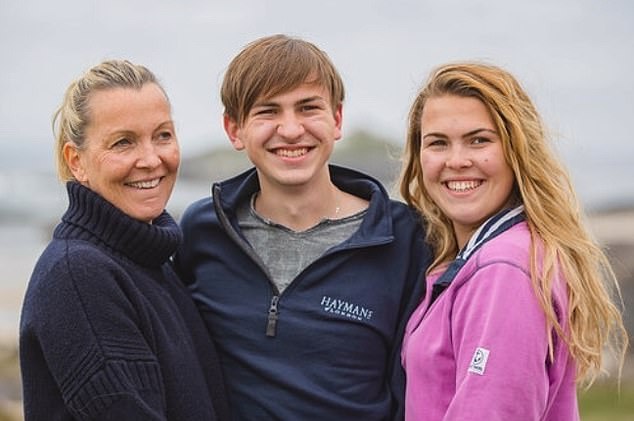 Suki Thompson with her son Sam and daughter Jaz. The entrepreneur, 52, from Berkhamsted, Hertfordshire has faulty BRCA2 gene

The Let’s Reset book is full of pictures by fashion photographer Rankin and includes interviews with industry leaders such as Nicola Mendelsohn, Vice-President for Europe, the Middle East and Africa at Facebook (who has the incurable blood cancer follicular lymphoma) urging us to ‘own’ our problems and talk about them at work.

One of the most moving stories comes from media executive Pippa Glucklich, whose husband’s suicide was triggered by work stress. She writes: ‘Like all of us, too often [I] put my “game face” on to get through.’

It also took Suki, who lives in Berkhamsted, Hertfordshire, a while to relinquish her tendency to put on a brave face instead of asking for help.

In her pre-Let’s Reset days, when she didn’t know any better, she would save up all her angst for Friday nights, when her ex-husband had the children, then she would put on a mournful movie and weep. Sometimes she thought: ‘I’m not sure I’m going to get through this.’ But she did.

She managed to cope with cancer and launch two businesses while staying sane and raising two children by leaning on those who loved her. While exercise kept her ‘head in the right place’, her girlfriends became invaluable.

‘I sort of discovered girlfriends during my divorce — because before, I don’t think I’d ever made proper time for them. I was a little bit selfish, actually.’

She recalls one of them, Sally, making her a ‘blues bag’ full of presents. ‘On days I felt sad, or the kids felt sad, we could open one of the presents,’ she says.

‘Everything was in there — biscuits and cakes and smellies, a wooden spoon to make something, books… it had about 70 presents in it. Like a huge stocking!’

Her indomitable mother also came to live with her, to provide support when both children were still under ten.

Did she ever feel depressed?

Her new business partner at the time was an emotionally intuitive man called Peter, whom she had chosen because he’d been married since he was 20.

‘A massive tick, right? He was amazing,’ she says. As were her clients, all of whom were told about her diagnosis.

Yet despite working a flexible four-day week and having a sympathetic business partner, Suki now regrets sticking so rigidly to her work ethic, especially after her nine months of chemotherapy for breast cancer.

‘I remember it getting to Christmas and the kids would be saying: “Mum, when are you ever going to stop saying you feel tired? When are you going to play with us again properly?”

‘I felt beholden to a lot of people and wanted to say “you don’t have to keep looking after me” but I let go too quickly. So my advice to people going through cancer is to give yourself some time.’

Her book is full of such advice on how to keep your mental health buoyant, the overwhelming message being to keep talking.

My favourite is this tip: ‘Keep a visual symbol of a battery in your mind, notice what drains and charges it, then make time to invest in your own wellbeing.’

Yet the ebb and flow of Suki’s own mental health wasn’t actually the catalyst for Let’s Reset. It was the effect her cancer battle had on her children, Jaz and Sam.

There is real sorrow in her voice when she says: ‘My son was really badly affected by it. By everything.’ Her daughter Jaz, 21, who is studying for a Masters degree in clinical psychology at Exeter University, was successfully treated for a bout of depression in her early student days and faces the prospect of being tested for the BRCA gene.

Suki’s 20-year-old son, however, who had been loosely diagnosed with high-functioning autism in 2015, continues to struggle with moments of acute depression.

‘Sam and I talked about it the other day and he said: “You know, Mum, you don’t understand how I feel because you have never been there.” And he’s right. I think Sam is brilliant but he has to look after himself and I think we all do.’

Today, Suki looks after herself with daily meditation, up to four hard workouts a week (boxing, combat and spinning), walking Beanie the dog every night, surfing every morning and evening whenever she is at her holiday apartment in Cornwall, and taking walking work meetings whenever possible. She also cycles.

I ask her what the one thing is that saved her, that she couldn’t have done without. ‘My mum!’ she says without hesitation.

Her mother Alison Harris, who is 76, still surfs and is proof that supportive relationships are a lifesaver for anyone struggling with mental health problems.

Last year she survived colon cancer and a heart attack, having already had a double mastectomy. Alison may have bequeathed her daughter her BRCA gene, but her toughness came with it.

‘Look, I feel really lucky,’ says Suki. ‘When you think you’re going to die, you do live life and it’s more precious.

‘I never would have coped with Sam, I don’t think, if I hadn’t been through what I’d been through.’

She writes in her book: ‘Some days I still feel like I’m drowning, but then I just think about what it’s like surfing; I breathe and go for it all over again.’

On Christmas Day she walked over Perranporth beach with her mum and daughter by her side, and together they plunged into the freezing Atlantic on their surfboards. Waterproof mascara was optional.