Everton 2-1 Rotherham AET: Abdoulaye Doucoure nets in extra time to put hosts into the fourth round

To understand how seriously Carlo Ancelotti is taking the FA Cup – and what peril Everton were in – the cost of his substitutions told the story.

With Rotherham, next to bottom in the Championship, having secured parity and appearing capable of causing shock and embarrassment, Everton’s manager turned around and summoned four players deep in the second half worth a combined £95million.

That Ancelotti was forced to take such measures illustrates how uncomfortable an afternoon that had appeared to be straightforward had become. Everton need one of those changes – £22million Abdoulaye Doucoure – to conjure a winning goal in extra-time to secure their progress. 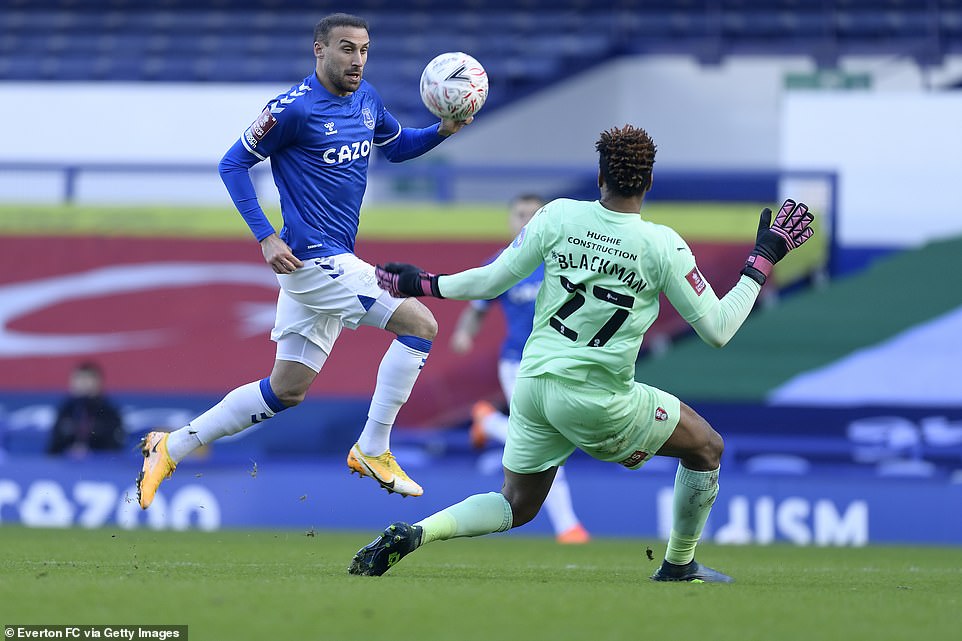 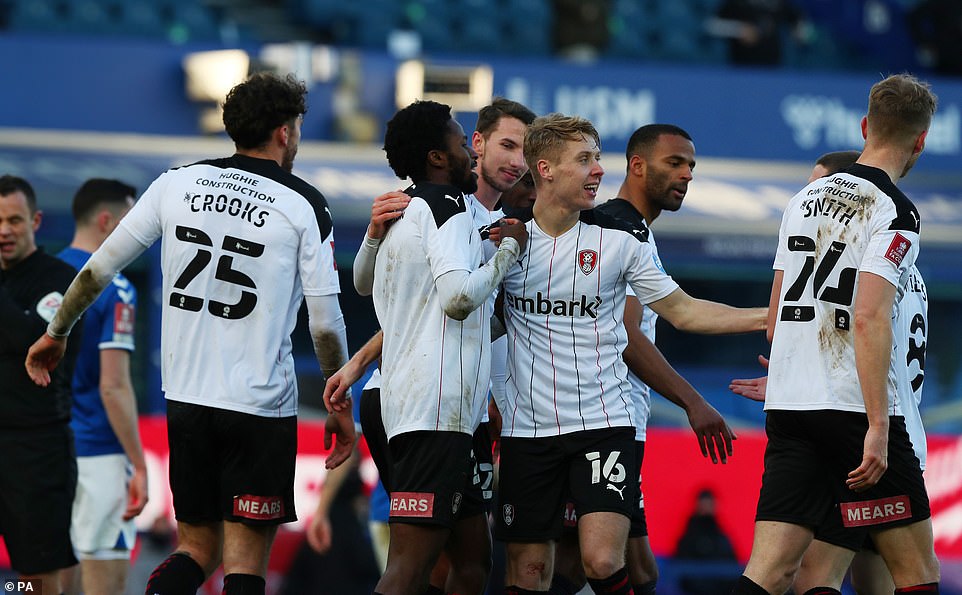 However, Rotherham’s Matthew Olosunde brought the visitors level in the second half by squeezing a shot in at the far post 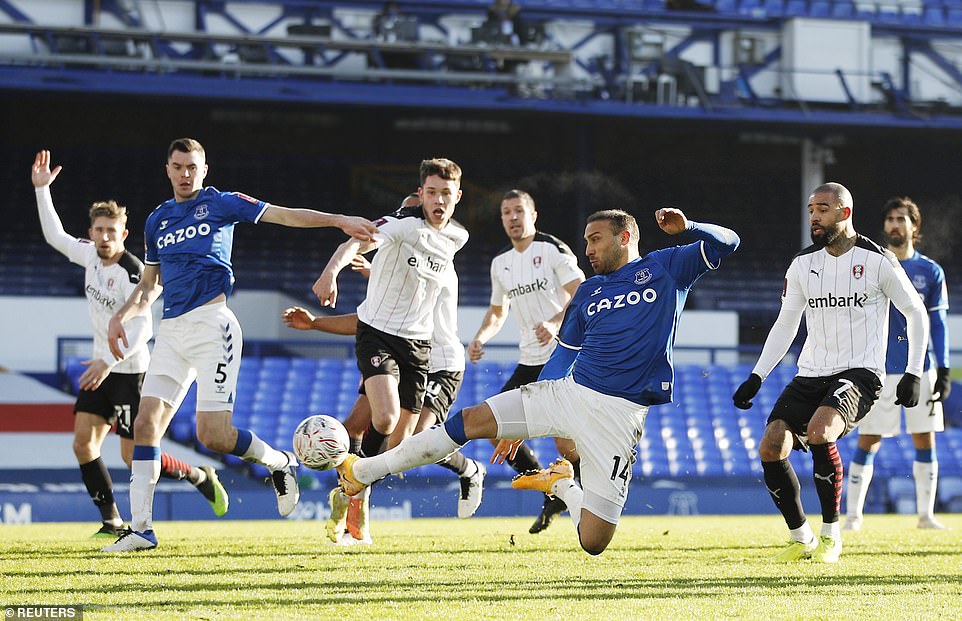 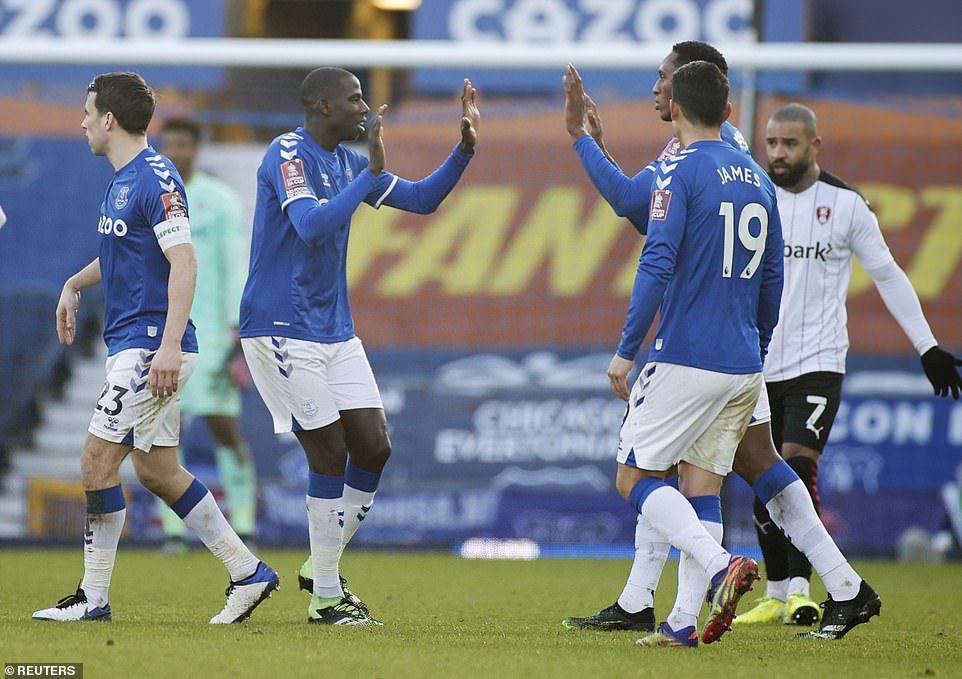 Not that Ancelotti took any satisfaction. His team eventually found a way to win thanks to their superior ability and fitness but for much of it, Everton were scruffy. If anything, he would have admired the diligence and perseverance Rotherham displayed to cause such problems.

Paul Warne’s side – who arrived here on the back of eight defeats in 10 games – were the better team for long periods and defeat hurt them. They kept going until the final whistle and made things as uncomfortable for their hosts as possible.

Everton started brightly enough. A mazy run from Anthony Gordon in the third minute carried him into Rotherham’s box but his shot was blocked; another effort from Andre Gomes fizzed wide of the post and the brisk started suggested they had set their intentions.

Sure enough, a goal quickly followed when Gordon – desperate to make the most of a starting opportunity – slipped a ball through to Cenk Tosun, who held his nerve and dinked his finish over goalkeeper Jamal Blackman. There were only eight minutes gone and you anticipated a procession.

Not so. Everton, remarkably, failed to muster another shot on target before the final whistle and were continually hemmed back by a team who played without inhibitions. Whatever difficulties Rotherham have endured in the Championship, they were not apparent here.

Rotherham changed the course of the contest in the 25th minute when Matt Olosunde got the better of a clearly unfit Lucas Digne and charged into the box, forcing a save from Robin Olsen before Dan Barlaser followed up with a drive that required the Swede to take decisive action.

It provided a noticeable injection of confidence and, suddenly, they seemed to understand that Everton were vulnerable. A corner from Barlaser, shortly after, was met at the near post by Matt Crooks but his header skimmed the crossbar. 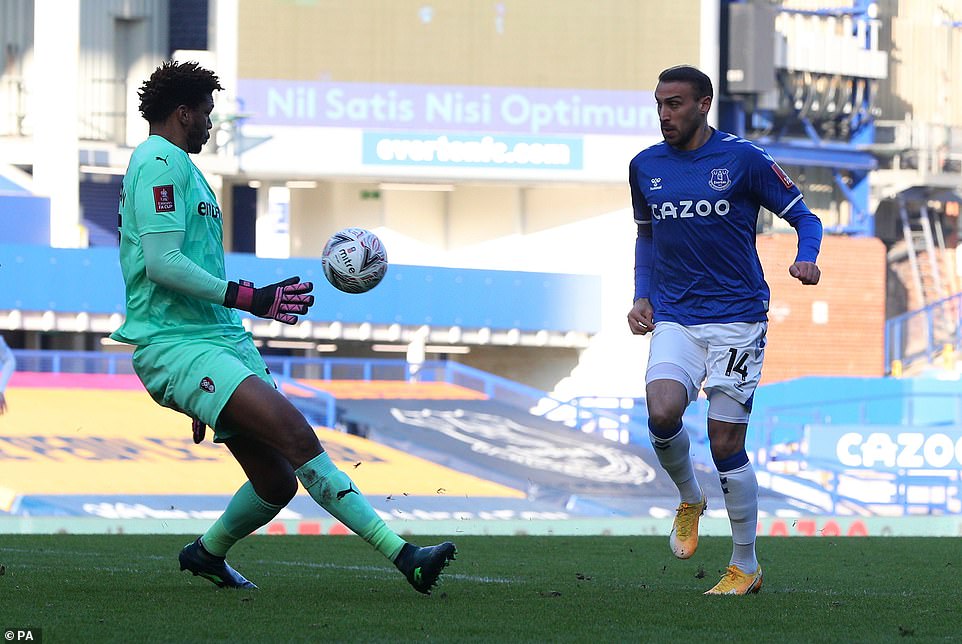 Everton got the ideal start to the game when Gordon played in Tosun, whose delicate finish beat Chelsea loanee Blackman 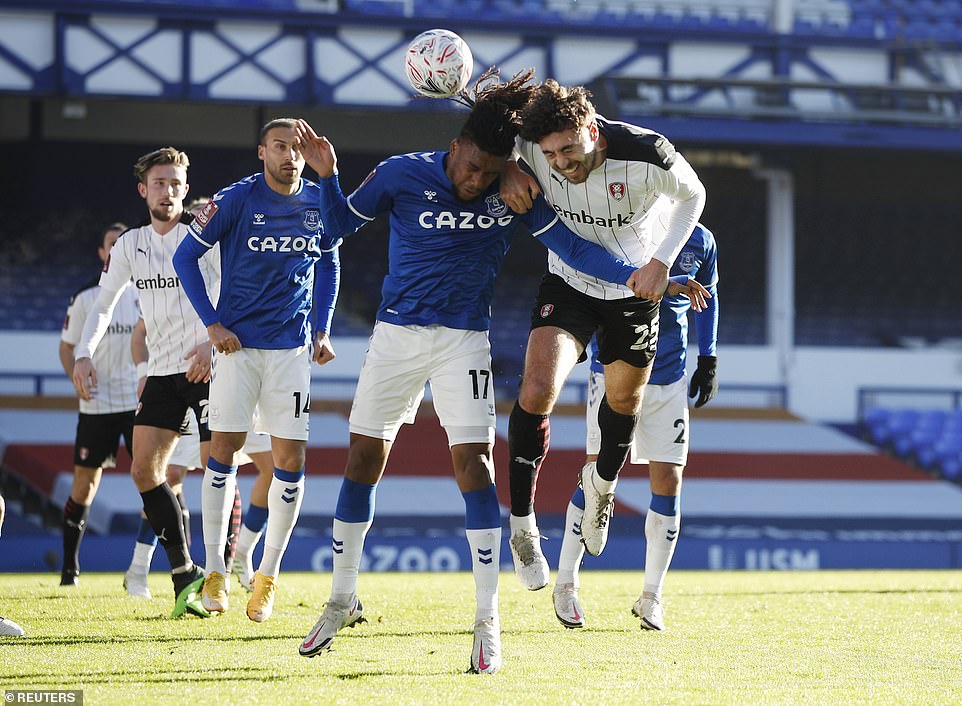 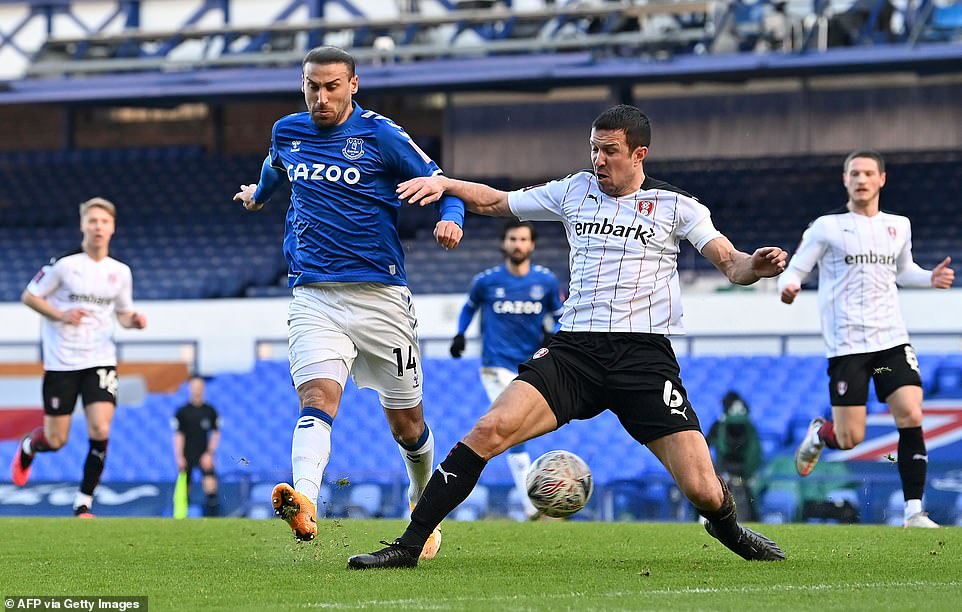 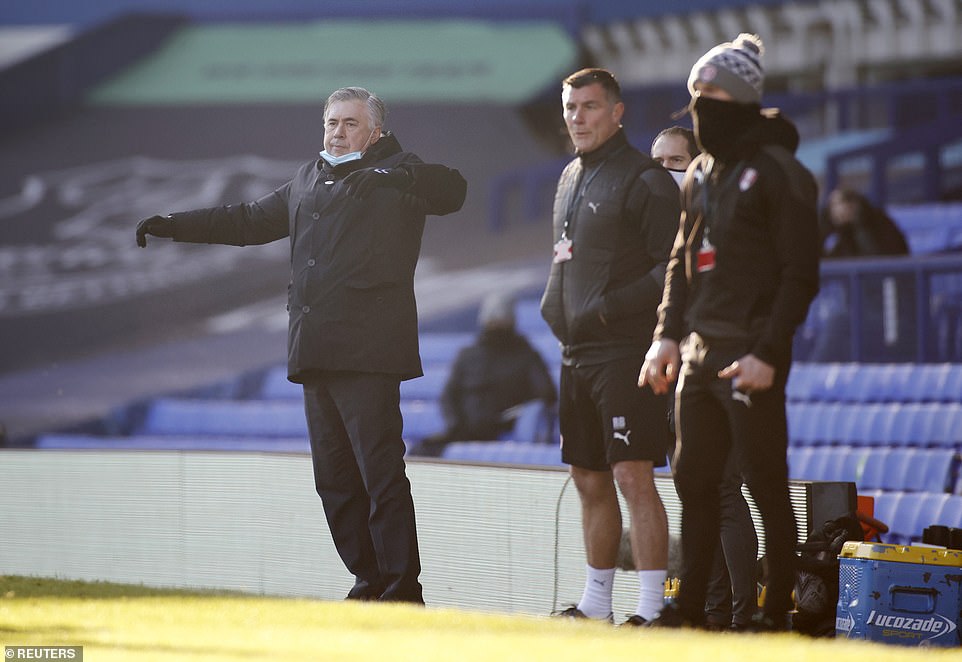 Eventually, Rotherham’s reward arrived. Early in the second half, Olosunde – a former Manchester United graduate – got away from Digne again and, this time, placed his shot beyond Olsen and into the net via the inside of a post.

At that point, the only outcome you could foresee was a shock but Ancelotti took decisive action. On came Yerry Mina, Gylfi Sifgurdsson and Bernard, along with Doucoure, and Everton found some balance and they thought they had won it in the 84th minute, only for VAR to rule out a Tosun strike.

No matter. Early in extra-time, James Rodriguez – who to that point had been a passenger – provided a beautiful pass for Doucoure and the midfielder galloped away before curling his left shot drive past Blackman. The celebrations were muted. Relief was the main emotion. 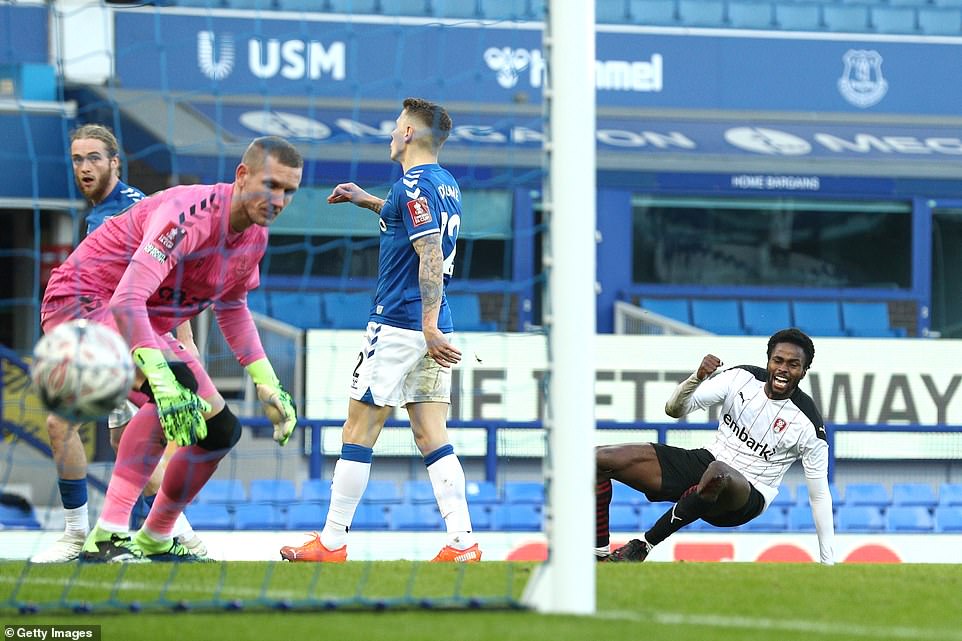 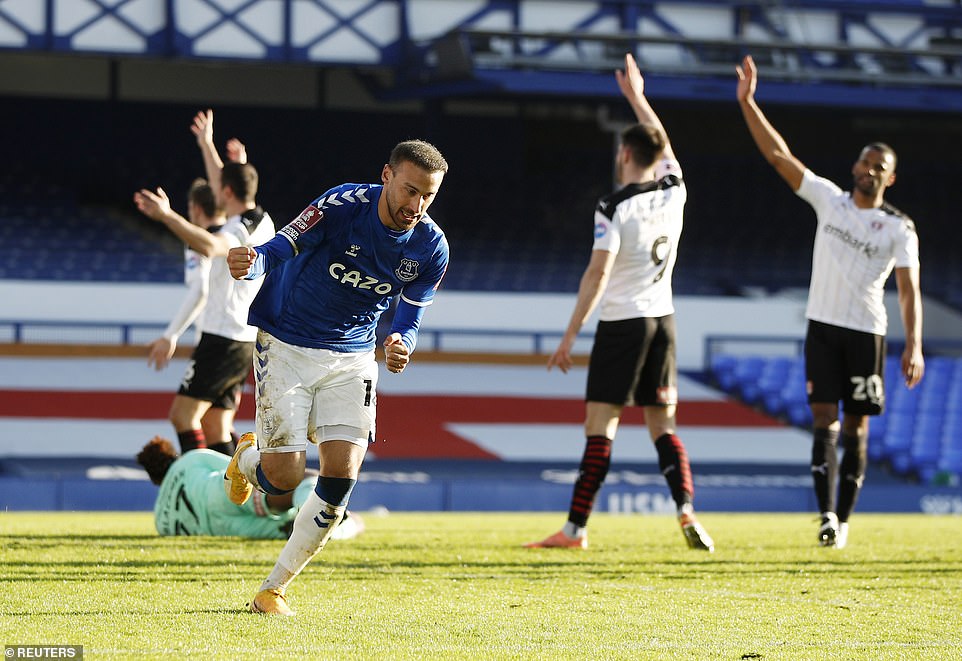 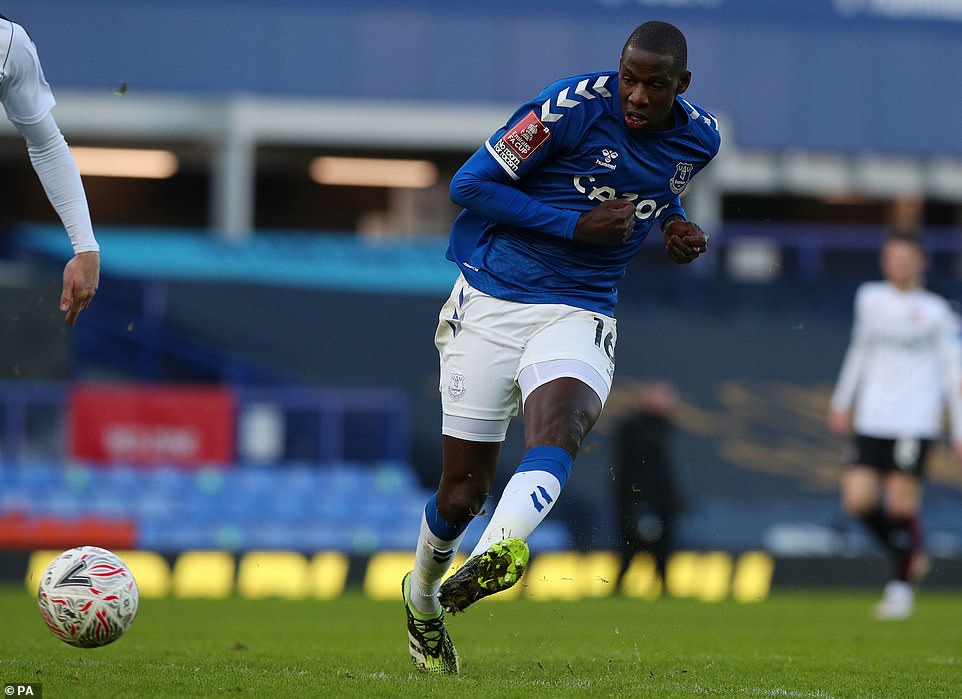 But in the third minute of the first half of extra time, Doucoure broke Rotherham hearts by calmly finishing beyond Blackman 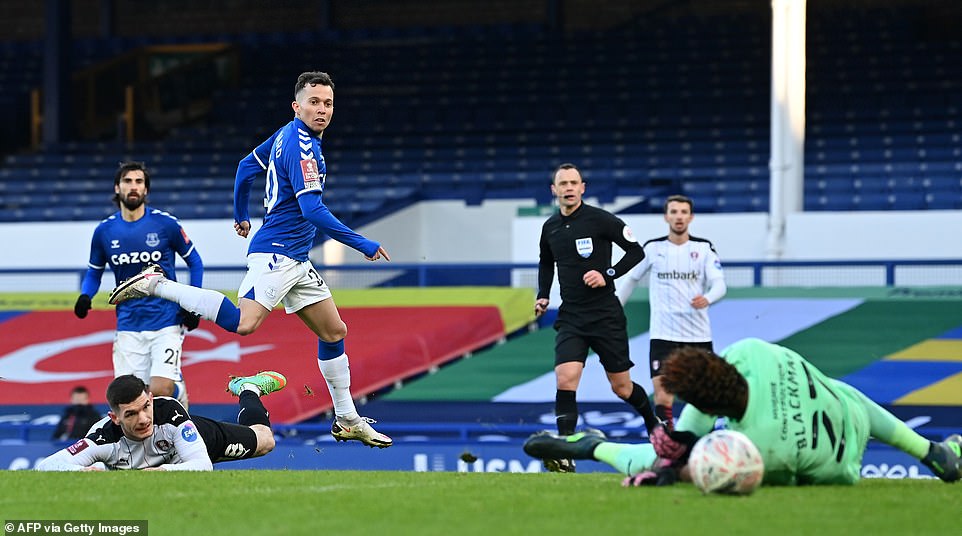 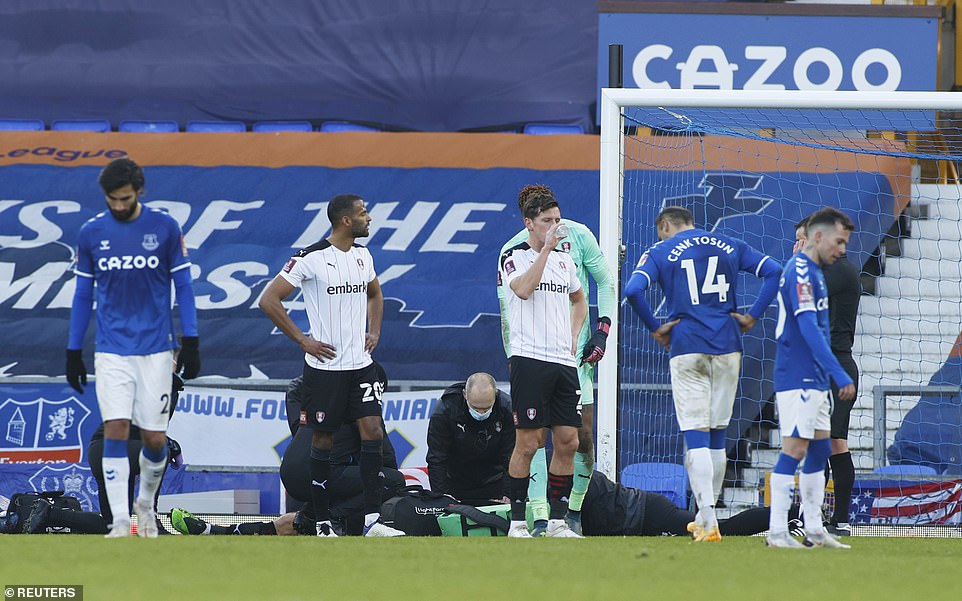 There were significant delays in extra time too, with Angus MacDonald (above) and Yerry Mina suffering heavy blows