Former Labour leader Jeremy Corbyn tonight  threw his weight behind a hard-Left plan to prevent schools from re-opening at the start of June.

The Islington North MP, 70, was the keynote speaker at an online rally organised by the Healthworker Coronavirus Activists Group.

It is calling for a ‘day of action’ on May 28, followed by a refusal to reopen classrooms on June 1, despite Government hopes of restarting classes.

The event was held via Zoom on Facebook and was hosted by Karen Reissmann, an NHS nurse and former election candidate for the hard Left Trade Union and Socialist Coalition (TUSC).

Labour MP Nadia Whittome and PCS union leader Mark Serwotka also spoke at the event, which came as the National Education Union (NEO) and others continued to oppose plans to reopen schools within a  fortnight.

Appearing in front of an audience of fewer than 1,000 people online, from his study at his north London home, Mr Corbyn said: ‘There should not be a return on June 1 to schools, unless the NEU tests have been met, and they have my support in doing that and I will continue to make that case for them.

‘Looking beyond them, I’m not quite sure when this swill all be over but I suspect it will not be over any sudden moment.

The Islington North MP, 70, was the keynote speaker at an online rally organised by the Healthworker Coronavirus Activists Group 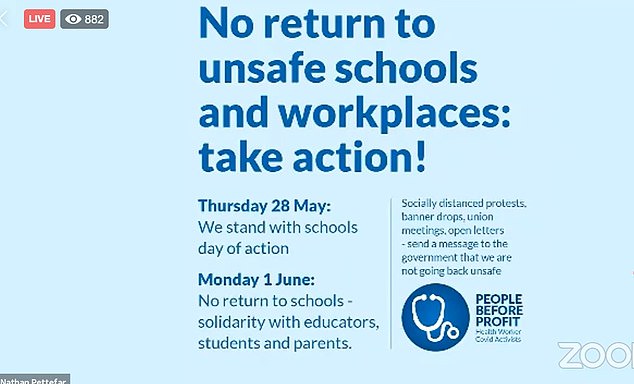 It is calling for a ‘day of action’ on May 28, followed by a refusal to reopen classrooms on June 1, despite Government hopes of restarting classes

‘It has also exposed a lack of values of so much in our society. Who is more important in the midst of a covid crisis … the migrant worker who cleans the hospital, cleans the bus or cleans the train, or the hedge fund manager who speculating against the NHS and against our economy in the future?

‘I think you all know the answer to that.’

Sir Keir Starmer, Mr Corbyn’s successor as Labour leader, has his own tests that should be in place before schools reopen.

A spokesman for the party leader told reporters during a telephone briefing this afternoon: ‘What we are calling for is for the Government to try and reach a consensus with teachers’ and parents’ organisations to drive a way through and find a way to respond to those concerns with practical proposals within the next couple of weeks.’

Asked what sort of practical proposals it was looking for, the spokesman added: ‘The three things we’ve called for is that, firstly, the Government should publish the scientific advice behind the rationale for the June 1 date to create transparency

‘Secondly, we’ve said the track-and-trace system needs to be in place and, thirdly, what we’ve said is the Government needs to bring parent groups, teachers and trade unions together to try and find a consensus to raise some of the concerns that have been raised.’

Boris Johnson’s plans to reopen schools on June 1 appeared to be collapsing today after at least 13 mainly Labour councils refused while parents who want their children back in class were being branded ‘teacher bashers’ by those in the profession.

Extraordinary rows between parents and teachers have broken out on WhatsApp groups and online forums as it was revealed that up to 1,500 English primary schools are now expected to remain closed in 12 days’ time despite millions of children being at home for more than eight weeks.

Justice Minister Robert Buckland admitted this morning that the June 1 reopening date may now not be ‘uniform’ across England – as the Prime Minister’s pledge descended into chaos amid mass dissension from school staff, unions and local councils.

Mr Buckland told the BBC: ‘I don’t think any of us want to put either children or our dedicated teaching staff in any danger at all, and the question of being safe is clearly paramount. So we’re all working towards June 1 and planning for that return, but I accept the point that there may well be issues from employers that need to be addressed which might not mean we’ll see a uniform approach on June 1.’ 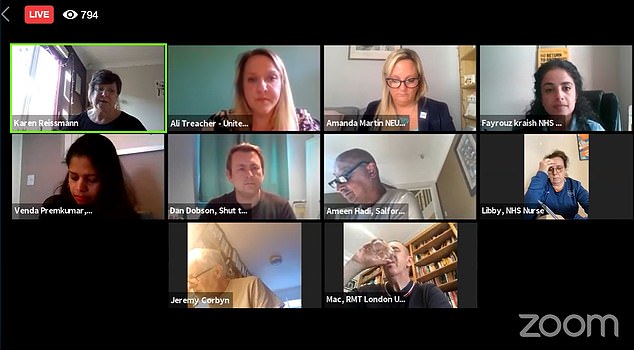 The event was held via Zoom on Facebook and was hosted by Karen Reissmann, an NHS nurse and former election candidate for the left-wing Trade Union and Socialist Coalition (TUSC)

In his 13 minute address, Mr Corbyn also attacked Donald Trump and Boris Johnson, suggesting there was a right-wing ‘agenda’ behind attacks on the World Health Organisation (WHO).

This is despite Downing Street distancing itself from Mr Trump’s threats to withdraw funding for the global health body, which the US president has accused of going easy on Beijing.

‘The way in which Donald Trump particularly, but Boris Johnson to some extent, and others attacked the WHO is absurd and bizarre but behind that there is a much bigger agenda,’ Mr Corbyn said.

‘Because the WHO has consistently said that, in response to the crises of Sars and other horrible epidemics that spread around the world, they are greatly exacerbated by inequality in health care.