Disgraced former Baltimore Ravens running back Ray Rice now wants to help current NFL players who have been accused of domestic violence. Rice has undergone counseling for years after he was seen striking his then-fiancee Janay Palmer in security footage from an Atlantic City casino in 2014.

The two were later married and remain together.

In recent weeks the NFL’s Kansas City Chiefs have cut running back Kareem Hunt after similar security footage showed the second-year star attacking a woman in a Cleveland hotel.

Also recently, the San Francisco 49ers cut Reuben Foster after the linebacker was arrested at the team hotel in Tampa, Florida, on a domestic violence charge. The Washington Redskins have since signed Foster, who has remained suspended by the NFL.

‘I know Kareem has apologized, and has expressed remorse for the survivors of domestic violence,’ Rice told ‘CBS This Morning’ co-host Gayle King in an interview that will air Tuesday morning. ‘And like I said, I’ll continue to do that, because I know now from doing the work, how gruesome it is.’ 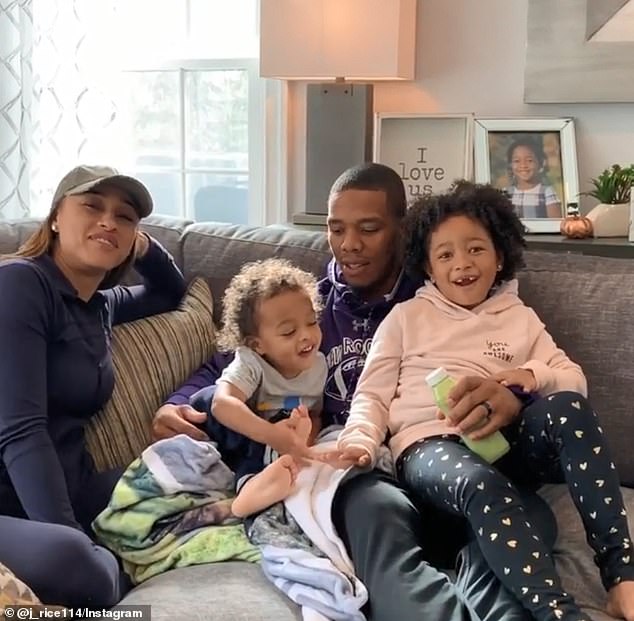 Rice, 31, cautioned that his eagerness to speak publicly on the issue has nothing to do with any desire to play in the NFL again.  In fact, Rice said he no longer hopes to return to the NFL.

‘Because I’ll be honest with you, it — and it’s not the game of football. I love football. I’m coaching. I’m helping out youth. I just feel like the pressure I was under of being a — like, a star, that was the person I hated the most,’ Rice said. ‘So I don’t want to go back to being something that, just because it financially took care of me, tormented my life. I want to be in a position now to help.’ 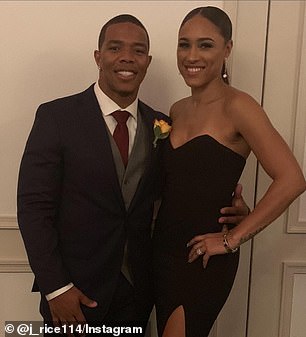 The league claims it tried and failed to obtain the video of Hunt striking a woman earlier in 2018, which is similar to what the league said about the Rice tape in 2014.

‘The same mistakes can never be repeated,’ he said at the time. ‘We will get our house in order first.’

In February of 2014, then-Baltimore Ravens running back Ray Rice and his then-fiancee (now wife) were arrested after an altercation at an Atlantic City casino.

TMZ released footage of the two arguing as they entered the hotel elevator, and further footage shows the woman’s unconscious body being dragged out of the elevator by Rice moments later. 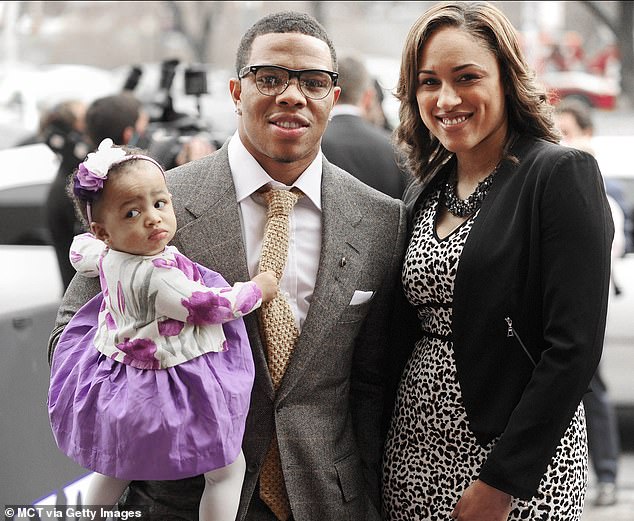 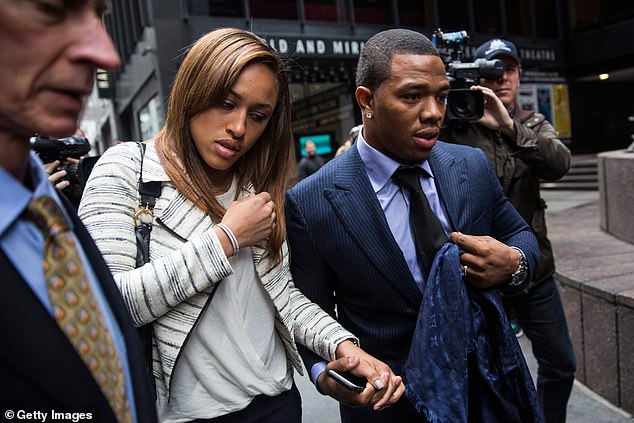 Rice and his wife Janay Palmer arrive for a hearing on November 5, 2014 in New York City. Rice is fighting his suspension after being caught beating his wife in an Atlantic City casino elevator 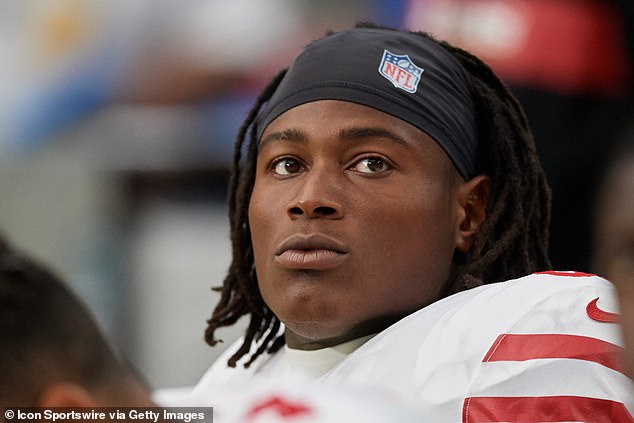 Recently the San Francisco 49ers cut Reuben Foster after the linebacker was arrested at the team hotel in Tampa, Florida, on a domestic violence charge. The Washington Redskins have since signed Foster, who has remained suspended by the NFL 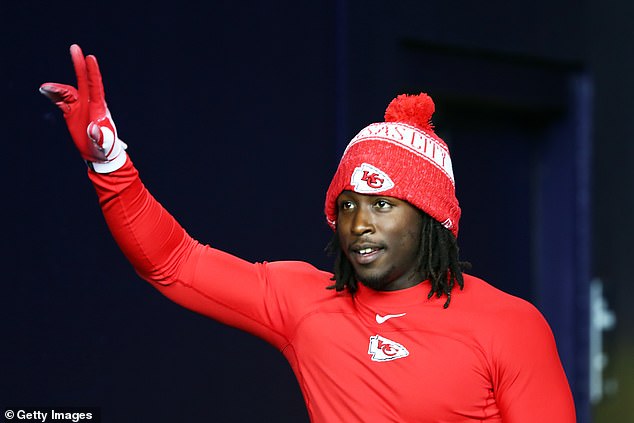 Rice was initially suspended for two games in July of 2014, and criminal charges were later dropped after the former Rutgers star agreed to counselling. Both Rice and his fiancée Janay Palmer met with Goodell to explain the circumstances surrounding the incident. Later reporting by The Wall Street Journal claimed that Goodell believed she was knocked unconscious after falling in the elevator. 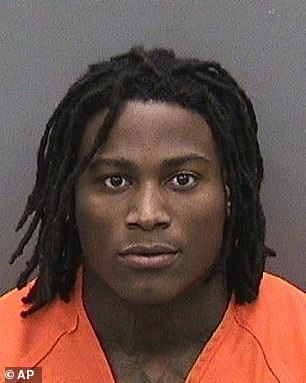 Foster was arrested for domestic violence but was released on a $2,000 bond the next day

Goodell did update the league’s domestic violence policy in response to the incident in August of 2014.

In September of that year, footage from inside the elevator was released that showed Rice striking his fiancée, knocking her unconscious.

Similarly to the ongoing situation with Hunt, the league claimed it requested the security footage, but was denied.

Ultimately Goodell claimed that Rice and his fiancee misled him about the incident.

Rice was suspended indefinitely and released by the Ravens. He has not played in the NFL since then, but the couple remains married.

Since the video of Hunt was released, other accusations of violence have surfaced against the Ohio native.

A Kansas City police report names Hunt, along with former Chiefs running back George Atkinson and one other as the suspects who beat a 38-year-old man inside Mosaic nightclub, breaking his rib and nose on January 7.

The NFL is also reportedly investigating a separate incident where Hunt was accused of punching a man in the face at an Ohio resort in June after getting into a verbal altercation. 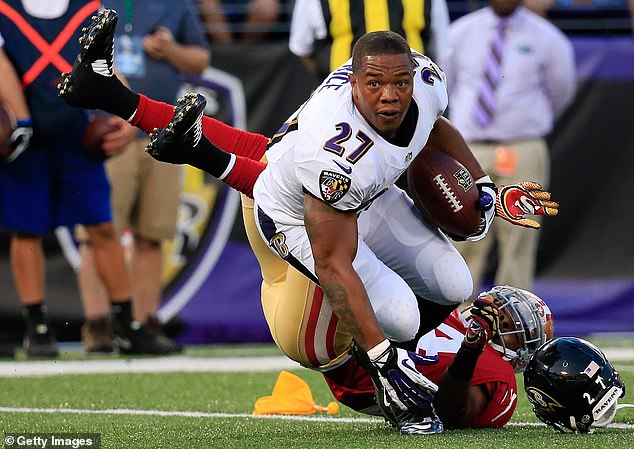 Now 31, Ray Rice never signed with another NFL team after being released in 2014