Ex-Supreme Court judge Lord Jonathan Sumption today called on Britain to learn to live alongside Covid-19 because ‘there have been far worse diseases’.

Lord Jonathan, who is also a medieval historian, praised Sweden’s approach to the pandemic, after the nation bucked the global trend and opted against a lockdown.

In his piece for The Telegraph, he said Sweden had a ‘substantially lower’ death rate than Britain — but admitted it was ‘fashionable’ to rubbish its approach.

Official figures show Sweden has suffered 564.4 coronavirus deaths for every million people. In comparison, the rate in the UK is 674.06.

He wrote: ‘Their hospitals were never overwhelmed. They never closed their schools. The predicted damage to their economy is about half of ours.’

Writing that ‘we cannot keep running away’, he added: ‘Our ancestors lived with far worse epidemic diseases without rushing to put their heads in a bag.’

Lord Jonathan Sumption (pictured), an ex-Supreme Court judge has said ‘there have been far worse diseases’ than coronavirus and that Britain needs to learn to live alongside Covid-19 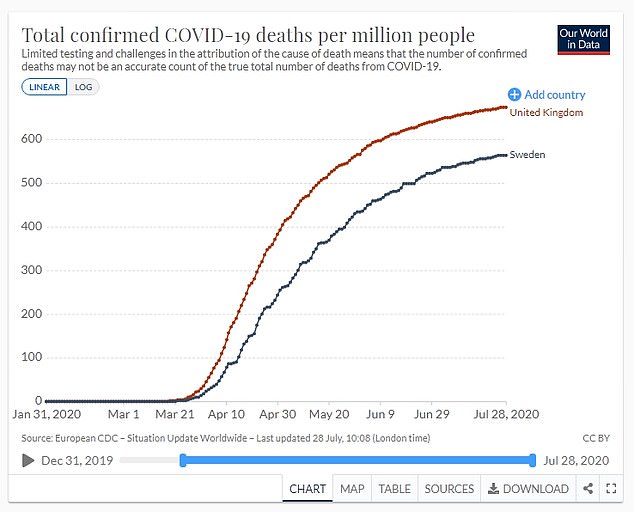 He thinks Sweden’s approach to coronavirus may have been a wiser one, considering their reported deaths per million are more than 100 lower than the UK’s 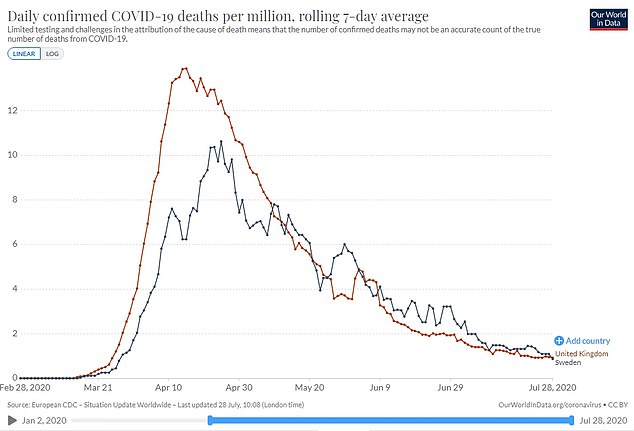 What other diseases have plagued the world in the past?

Roughly 25million people in Europe died from the Black Death, or a third of the continent’s population at the time.

The Black Death was caused by the plague and was likely transmitted from rodents to humans by the bite of infected fleas.

Some 228,000 in Britain died from the Spanish flu. Worldwide, it is thought to have killed at least 50million people.

The 1918 flu crisis was the most severe pandemic in recent history. It was caused by an H1N1 virus with genes of avian origin.

There is not yet a universal consensus regarding where the virus originated. Descendants of the virus are still in circulation today.

An estimated 300million people in the world died from smallpox in the 20th century alone.

Smallpox has existed for at least 3,000 years. It was officially eradicated in 1979.

Smallpox is caused by infection with the variola virus. It killed around 30 per cent of infected people, it is estimated.

In 2013, researchers confirmed earlier speculation that the cause was Yersinia pestis, the same bacterium responsible for the Black Death.

It is estimated that 120,000 people die of cholera each year.

The first cholera outbreak emerged out of the Ganges Delta with an outbreak in Jessore, India, in 1817 stemming from contaminated rice.

A bacterium called vibrio cholerae causes cholera infection. The deadly effects of the disease are the result of a toxin the bacteria produces in the small intestine.

Lord Sumption discussed how the Government was forced into lockdown on March 23 by a report from former government adviser Neil Ferguson.

The epidemiologist was nicknamed ‘Professor Lockdown’ for his grim modelling that predicted 510,000 coronavirus deaths in the ‘worst-case scenario’.

Professor Ferguson quit his role on SAGE in May after admitting to breaking his own lockdown rules to allow his mistress to stay at his home.

His Imperial College London team’s report added that a lockdown would only work if it was kept in place until there was a vaccine, Lord Sumption noted.

Otherwise the coronavirus — scientifically known as SARS-CoV-2 — would inevitably return, most likely even stronger than before.

Lord Sumption added the report noted aggressive isolation policies ‘merely push all transmission to the period after they are lifted’.

This has been seen in countries which have recently lifted lockdowns, with a spike in cases seen in nations such as Spain, Germany, Japan and Hong Kong.

Lord Sumption, last year’s BBC Reith Lecturer, believes there were only three options the Government could have taken in terms of lockdown.

These were: No lockdown, indefinite lockdown or lockdown for long enough for NHS intensive care capacity to catch up.

He added that intensive care units seemed to catch up with capacity within a month so the Government’s decision to lift lockdown in June was ‘six to eight weeks after it had lost any justification even by its own logic’.

And he went on to say that he believes the Government seems to be suggesting that the ‘R-number’ can be kept below one with social distancing alone, rather than a lockdown.

The R number, or reproduction number, refers to how many people an infectious person spreads the virus to. If it is higher than one, then the number of cases increases exponentially.

Lord Sumption added that if the Government is correct in that belief then the nation could have stuck with strict social distancing measures in March, rather than opting for a lockdown.

He went on to discuss how the UK should go about leaving lockdown and how social distancing should continue indefinitely until a vaccine has been created.

He wrote: ‘Our whole transport infrastructure, the buildings in which we work, play and eat out, depend on our being close together.

‘We have surrendered our liberty to the virus. Are we to surrender our humanity as well?’

He believes that the only reason the UK and Europe were hit so hard by coronavirus is because of a ‘false sense of security’.

While diseases such as Mers, Sars, Ebola, Zika, Asian flu, Hong Kong flu, H1N1 and HIV, all happened in the last 20 years, they barely touched Europe.

He adds that a major UK pandemic was at the top of the National Risk Register since it was published in 2008.

While Lord Sumption admits that Covid-19 is a serious disease, he puts it ‘at the bottom end of the scale’ when it comes to historical diseases.

He wrote: ‘For some people, social distancing will remain a sensible precaution. The rest of us should respect their choice but drop it and get on with out lives.

‘We cannot keep running away.’