Dele Alli’s rumoured relationship with Pep Guardiola’s daughter appears to be going strong after they were spotted on a lunch and coffee date in exclusive Mayfair.

The Spurs midfielder, 25, was seen kissing Maria, 20, at a London rooftop bar in May and they still appear to be close five months on.

The Manchester City coach’s daughter led the way as she and Dele carried takeaway coffees at a Starbucks in central London, after leaving the nearby Novikov Restaurant and Bar in Berkeley Street.

The luxury West End venue is a popular hotspot with the celebs and Premier League footballers, with the likes of Justin Bieber, Anthony Joshua, Drake and Novak Djokovic all regulars.

Afterwards Dele, whose career at Spurs is rumoured to be hanging in the balance, then got into a waiting car with Maria and were swept away, a witness said.  Their apparent burgeoning relationship emerged months after Dele was left ‘gutted’ over his split from his model girlfriend of five years, Ruby Mae, in February. It was rumoured he was looking for love on celebrity dating app Raya.

The increasing hints of romance between the footballer and the Spanish-born student also adds spice to the rivalry between Paula’s father’s Manchester City side, who she also supports, and Dele’s less successful Tottenham Hotspur.

Champions Man City spent the summer fighting to buy Dele’s close friend and teammate Harry Kane for £150million before the deal fell through, while City’s assent to the top of English football in recent years has involved a number of battles with Spurs, with Guardiola’s team usually finishing on top. It is not know what the star manager thinks about his daughter’s relationship with Dele, with his spokesman declining to comment previously.

MailOnline has contacted Dele’s representatives for comment. His spokesman said there would be no comment on his private life. 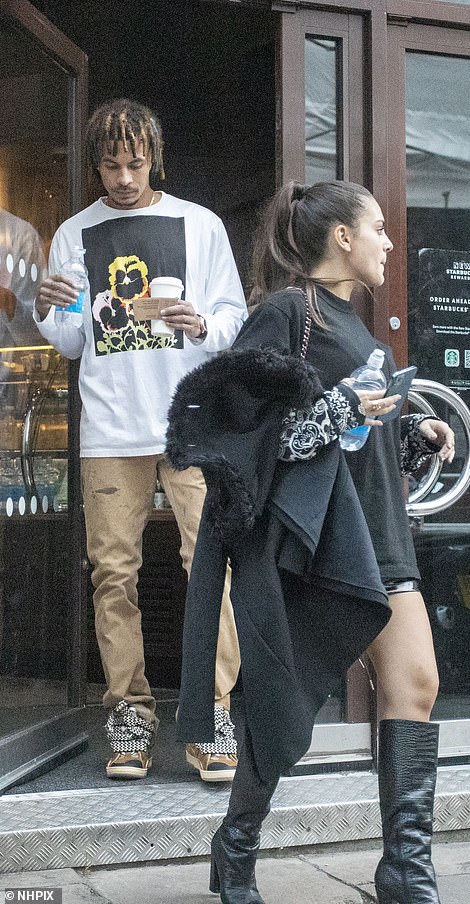 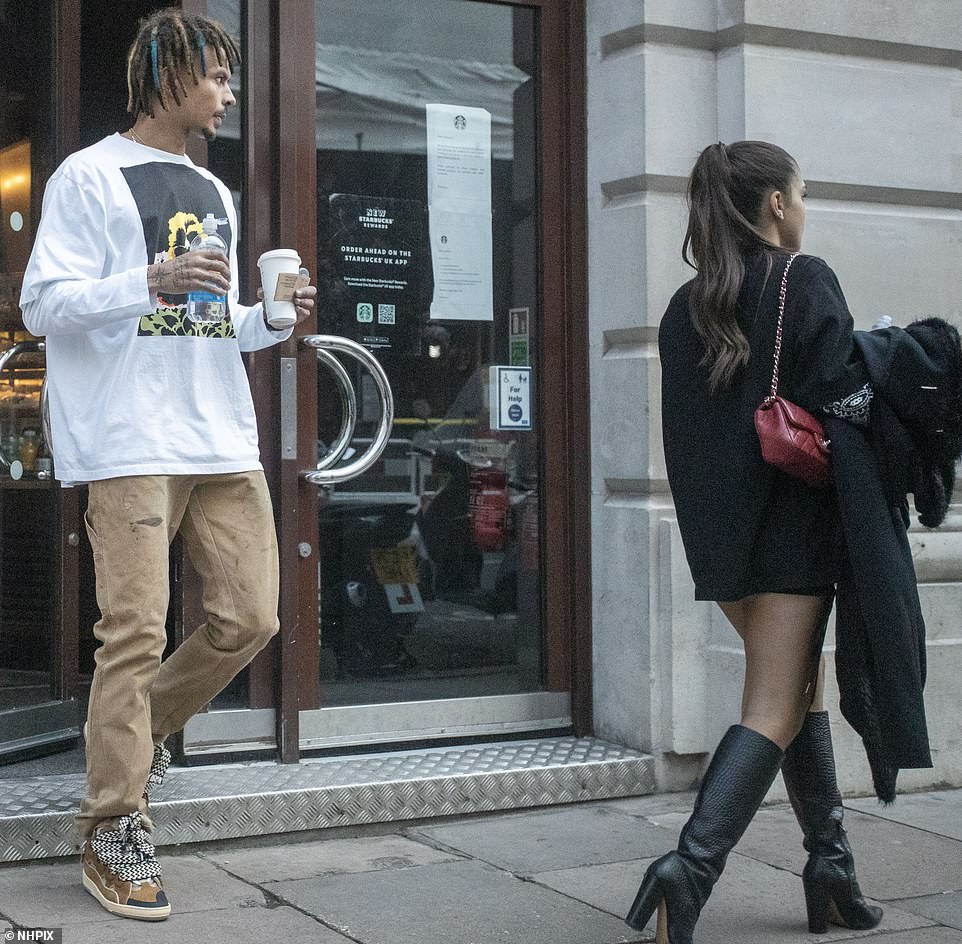 There have been rumours they are a couple after Dele split with his previous girlfriend, Ruby Mae 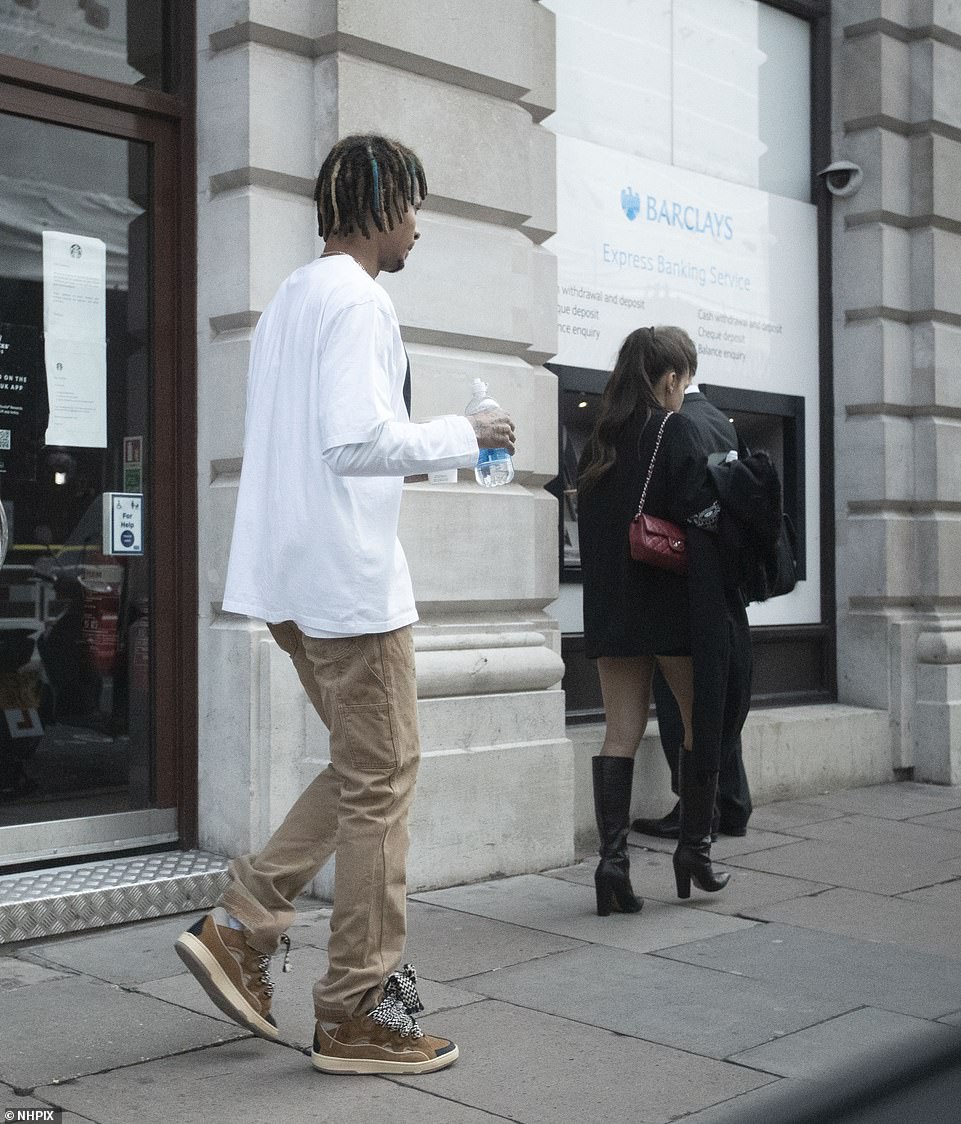 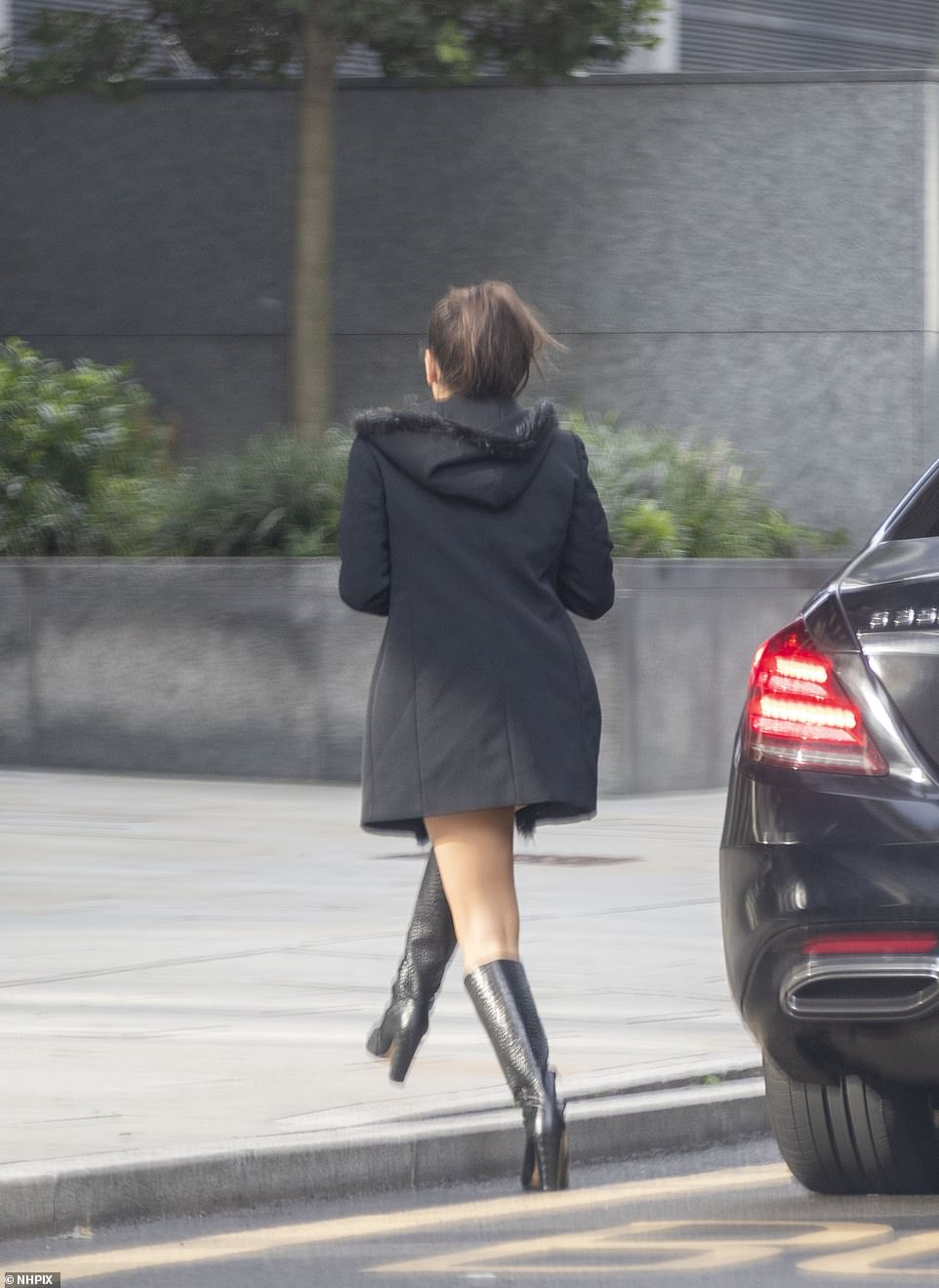 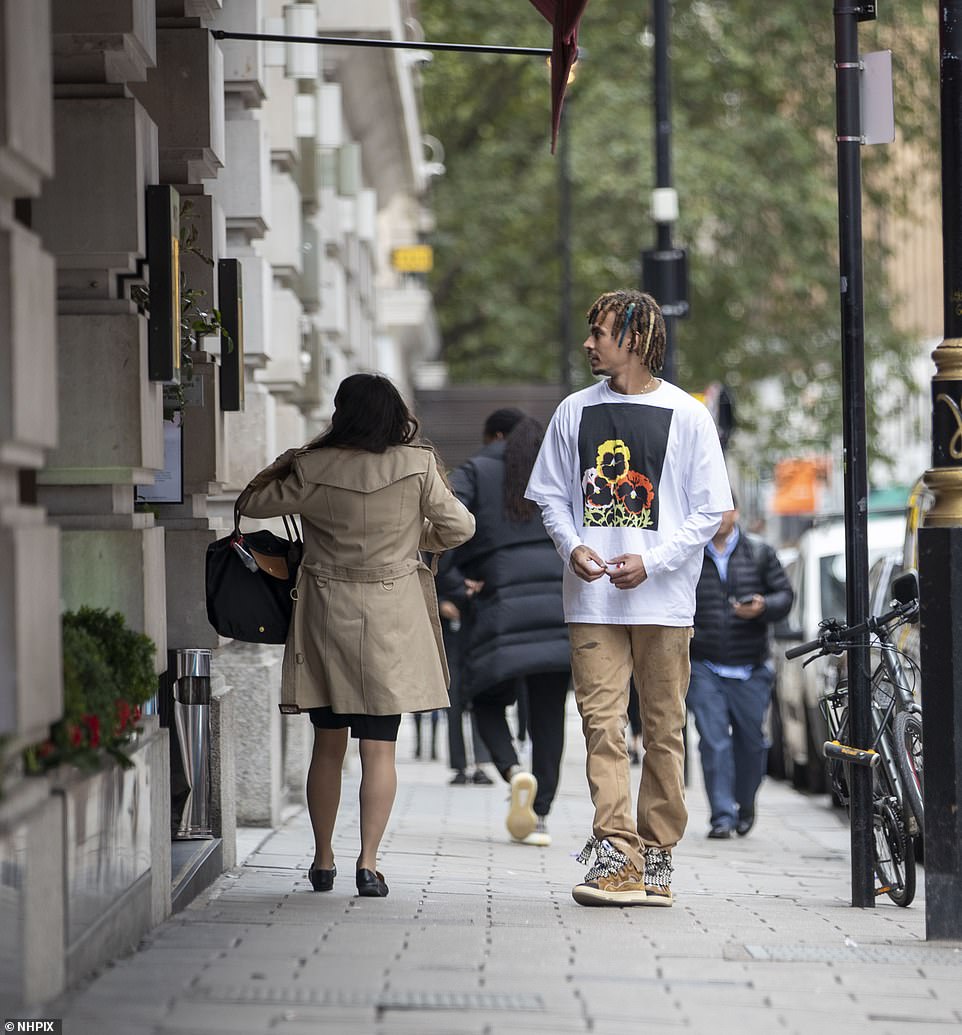 Dele had been spotted outside Mayfair’s Novikov restaurant and left with Maria. The bar and grill is loved by celebs 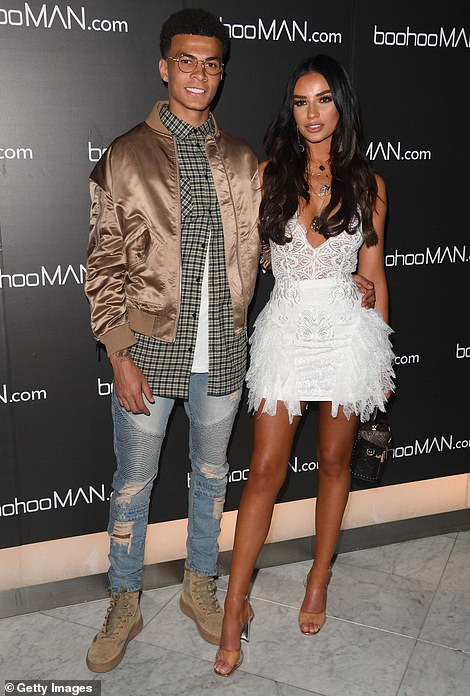 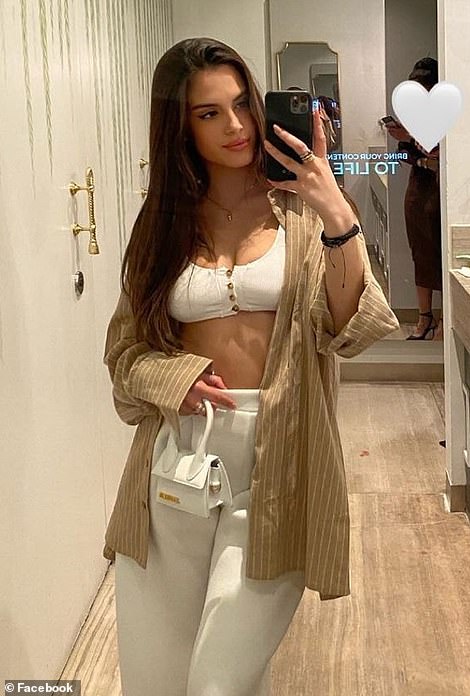 The ex factor: Dele and Ruby Mae (left) were together since early 2016. She was by his side at the Euros that summer and the 2018 World Cup in Russia before splitting early this year. He is said to have met Maria (right) in April 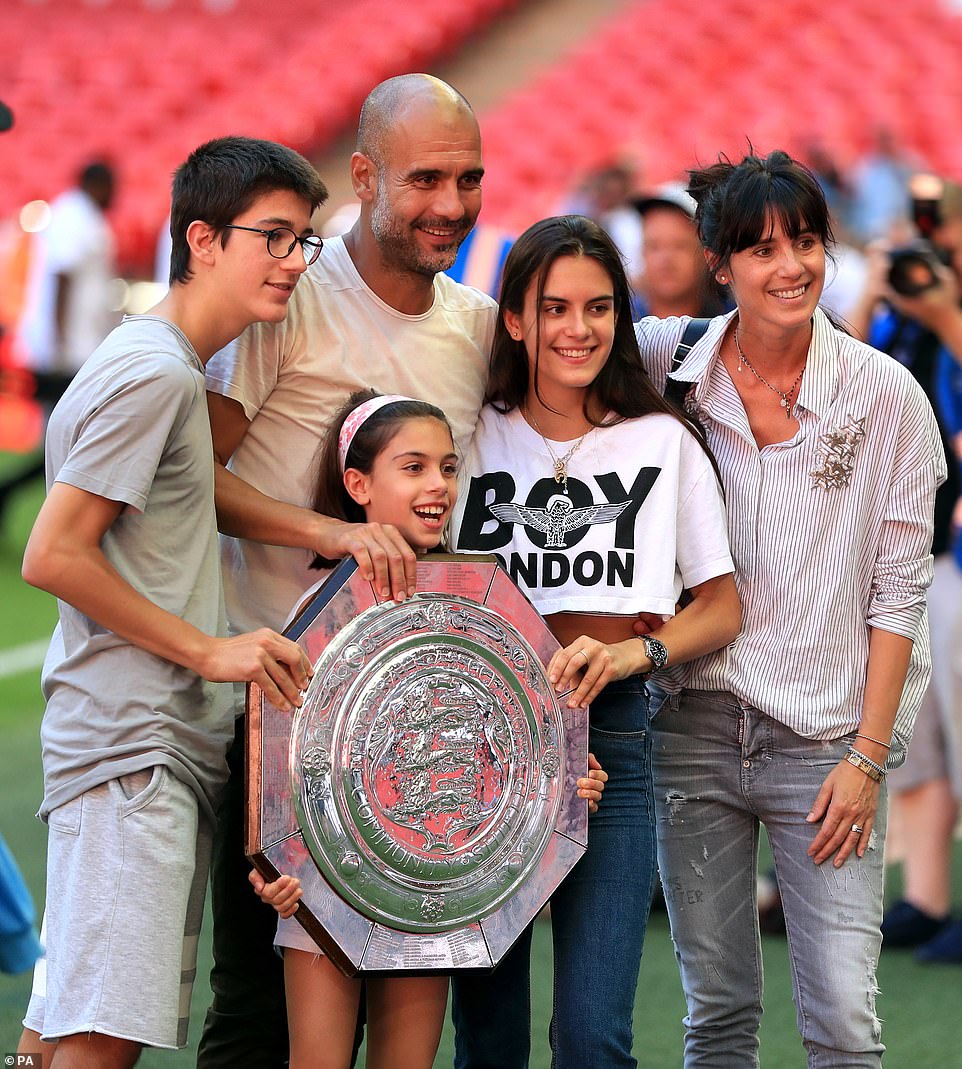 It was claimed that Dele and Maria met in April and that they ‘didn’t care who saw them’ as they kissed in front of a DJ booth at Cloud 9 bar.

An ‘onlooker’ told The Sun: ‘Dele and Maria didn’t seem to have a care in the world. They didn’t mind who saw them as they smooched in front of the DJ booth.

‘It was packed with hundreds of revellers watching on. All the tables had been booked and were completely full. Strangers were wandering past and Dele and Maria didn’t blink an eye.’

They added that the duo looked ‘so cute’ and could have passed for ‘honeymooners’. 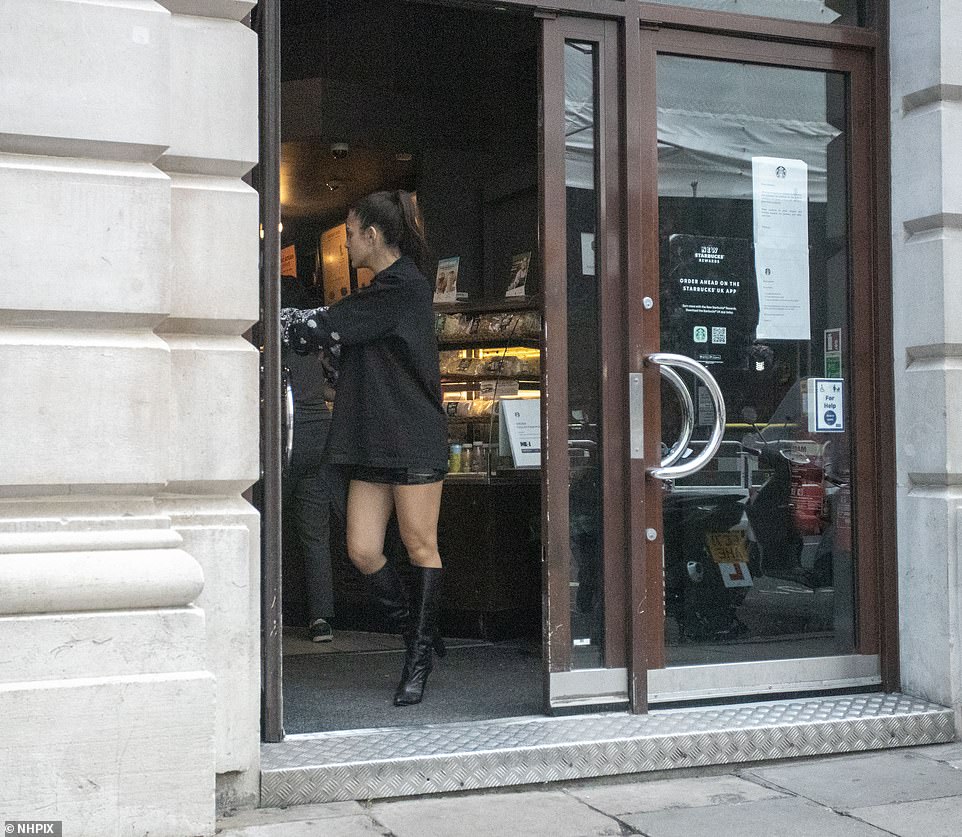 Maria holds the Starbucks door for Dele, whose spokesman declined to comment on their relationship today 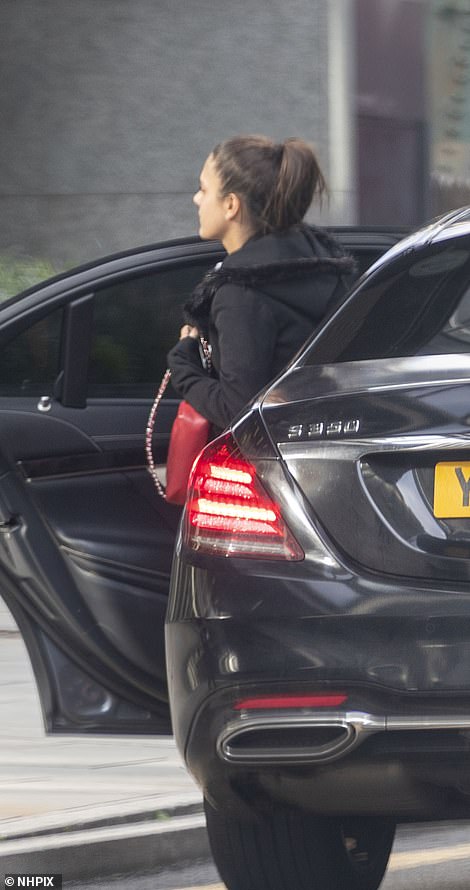 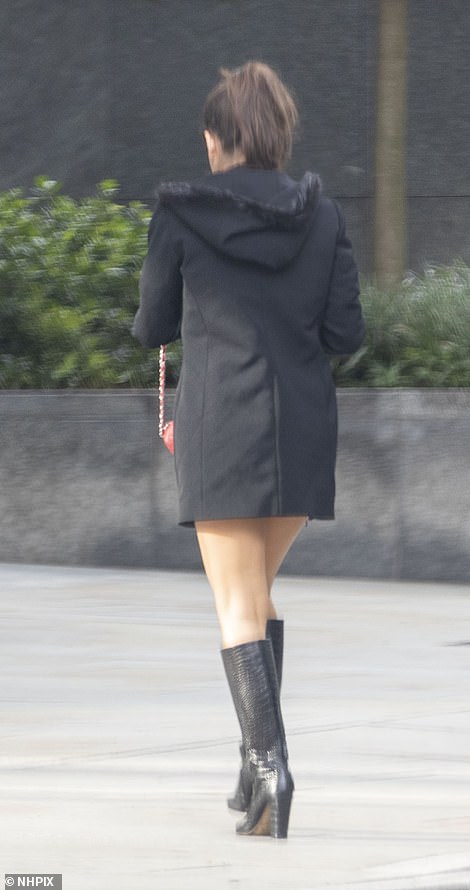 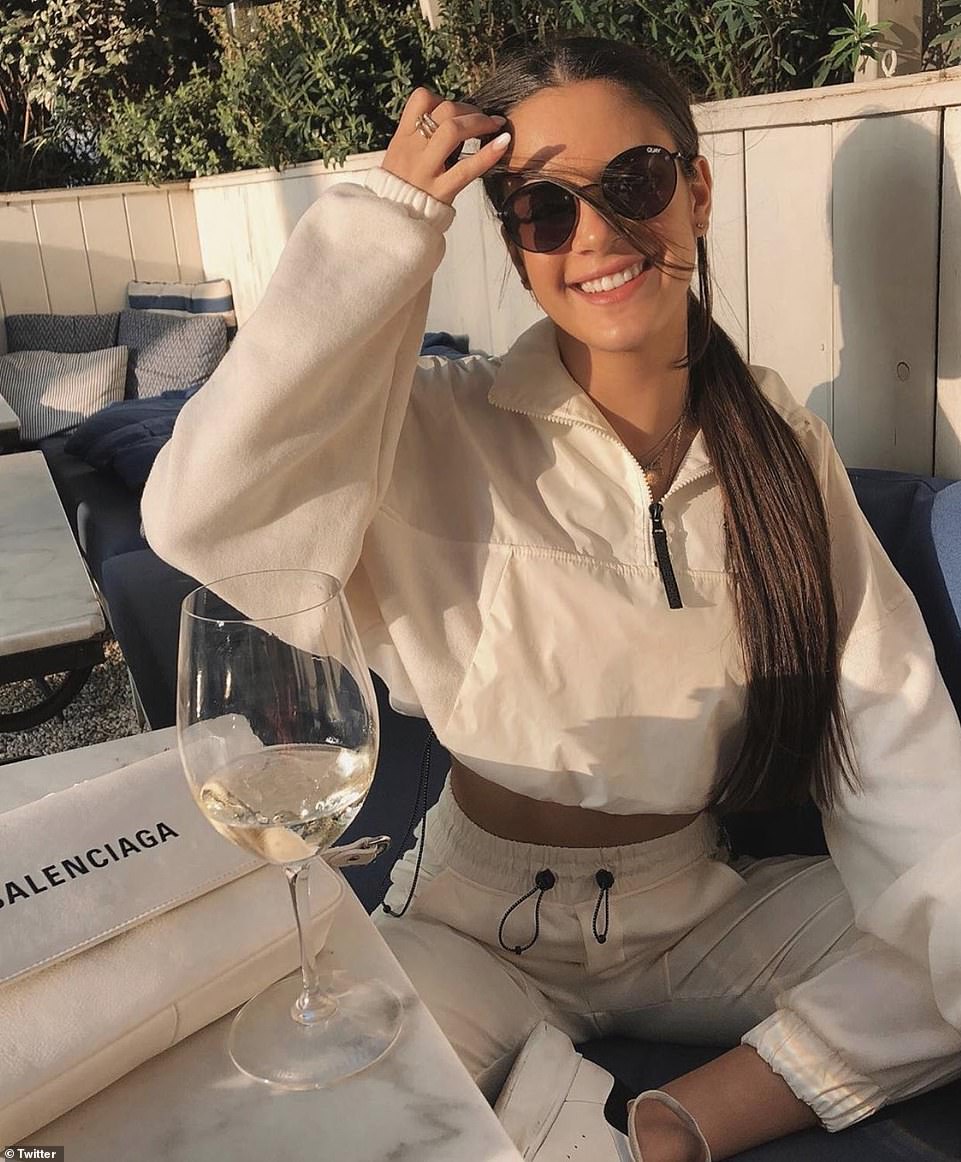 ‘Smitten’: In new pictures obtained by The Sun, it’s claimed that the Tottenham footballer, 25, looked ‘smitten’ with the student, 20, (pictured) at a rooftop bar in London last Sunday 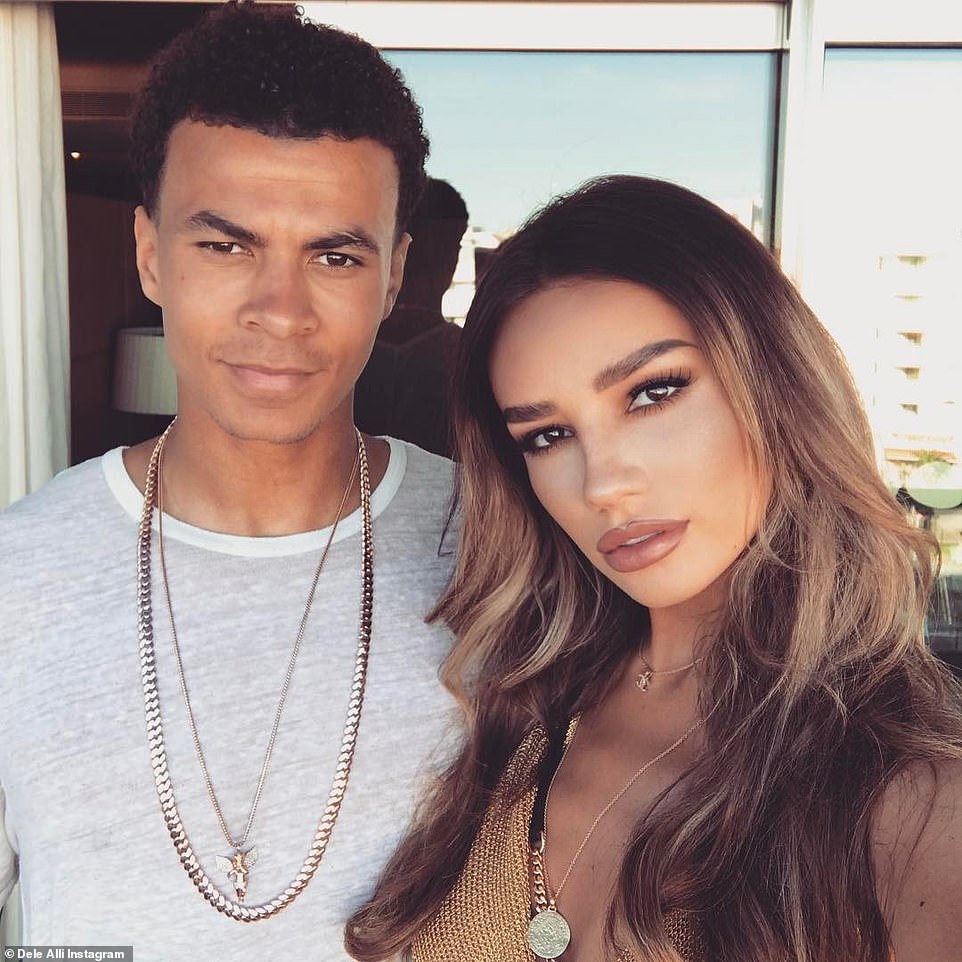 Split: It comes after it was claimed that Dele was left ‘gutted’ over his split from his model girlfriend of five years Ruby Mae and has been looking for love on celebrity dating app Raya

While a different source said: ‘Dele looked smitten and finally over being dumped by his long-term lover Ruby Mae. Dele and Maria are young, free and single. Who knows where it will go from here?’

However, Maria is said to have told friends that she is ‘just friends’ with Dele despite their reported kiss.

Pep Guardiola’s daughter Maria lives in London, where she is studying, and has a huge following on Instagram.

Guardiola, whose team Man City just won the Premier League, has three children – Maria, 20, Marius, 18, and Valentina, 13, with his wife Cristina Serra, they married in 2014.

In March, it was claimed that Dele was looking for love on celebrity dating app, Raya, after being ‘dumped’ by his model girlfriend Ruby.

The Tottenham and England star was said to be ‘gutted’ after his girlfriend of five-years, 25, decided to end things, prompting his decision to join the exclusive platform used by the likes of Cara Delevingne and Ben Affleck.

Speaking of his love life, a pal said to The Sun: ‘Dele’s still gutted about the break-up with Ruby but knows he’s got to look to the future.

‘His pride was dented but now he is open about starting a relationship with the right person.’ 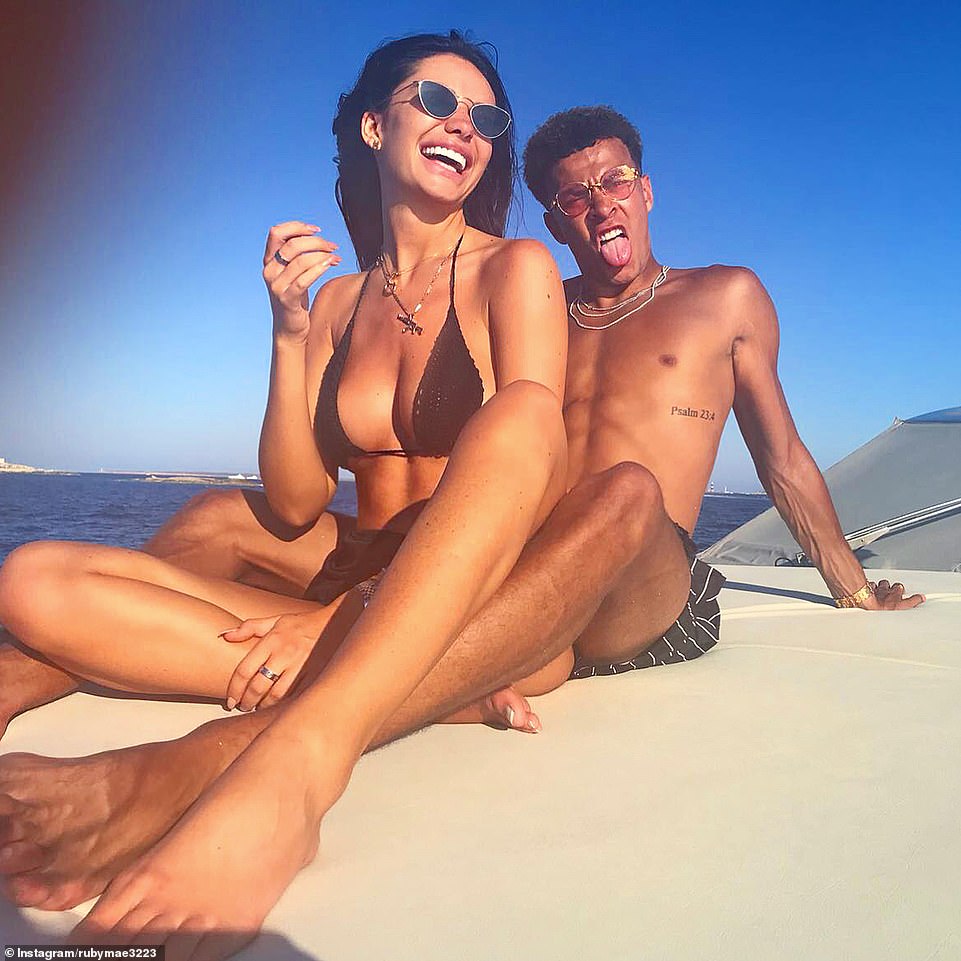 Break up: In February, Dele and his model girlfriend split up after the pair kept getting into blazing rows, insiders claimed (pictured in happier times)

In February, Dele and his model girlfriend split up after the pair kept getting into blazing rows, insiders claimed.

Ruby – who has modelled for top-brands Chanel and Dolce & Gabbana – was reportedly left ‘incensed’ over his behaviour and is understood to have ‘packed up her things’ and moved out of their £2million mansion.

A source said to the publication: ‘Their relationship has been turbulent, but it now feels very much like the end.’

Dele and Ruby were together since early 2016. She was by his side at the Euros that summer and the 2018 World Cup in Russia before they split for a short time early in 2019.

They were back together by the summer that year with the football ace reportedly flying her out to Madrid for the Champions League final between Tottenham and Liverpool at the start of June.

Dele and Ruby’s split came less than a year after the pair were robbed at knife-point by thieves who forced their way in to their Barnet, north London, home in the early hours of the morning.

In May 2020, Dele and Ruby were reportedly playing pool together when he was punched in the face by knife-wielding thugs.

The couple had been isolating with Dele’s brother Harry Hickford, his partner and a long-term friend when the robbers broke in and demanded the footballer hand over his valuables.

Met Police officers said that thousands in jewellery and watches were stolen in the raid.

The Telegraph also reported that the footballer has an overnight security guard, who was apparently ‘not aware’ of the two intruders.