With one billion ‘full Englishes’ eaten each year in the UK, the breakfast is a much-loved national staple.

But new research into English ancestry has revealed we’re a lot less British than you think – meaning a ‘true’ fry up should look very different.

Scientists have found that English DNA now contains genes from 26 regions across the world, and have cooked up a ‘real’ Full English breakfast to match.

The team suggests new foods, including Scandinavian baked eggs and French cassoulet, should replace some of the breakfast’s traditional ingredients.

This ensures the fry-up represents the ‘diversity’ of the modern Englishman in the breakfast’s biggest shake-up since its invention in the Middle Ages.

Scientists have found that English DNA now contains genes from 26 regions across the world, and have created a ‘real’ Full English breakfast to match. The team suggest adding new foods based on the DNA proportions (pictured) of the modern Englishman

Researchers have found the average Englishman’s DNA is split between 26 global regions.

They have suggested swapping ingredients from the traditional Full English with new foods to better represent this diversity.

The team only included foods from regions with at least a 1 per cent stake in modern English DNA.

The researchers, from London-based AncestryDNA, found that genes from Great Britain make up only 37 per cent of the average Englishman.

More than 20 per cent of a modern national’s DNA is Irish, with Western Europe making up a further 20 per cent.

To match this, the researchers swapped out baked beans for French cassoulet in their modern Full English, and exchanged fried bread for Irish potato Farls.

To reflect this, Spanish Iberico pork replaces bacon in the new fry-up, while Scandinavian baked eggs were swapped in for the traditional fried variety.

These new foods represent the Italian/Greek (1.9 per cent), Eastern European (1.6 per cent) and European Jewish (1.4 per cent) heritage present in the DNA of the modern Englishman.

Each of the team’s DNA tests surveyed a person’s entire genome at around 700,000 locations via a saliva sample. 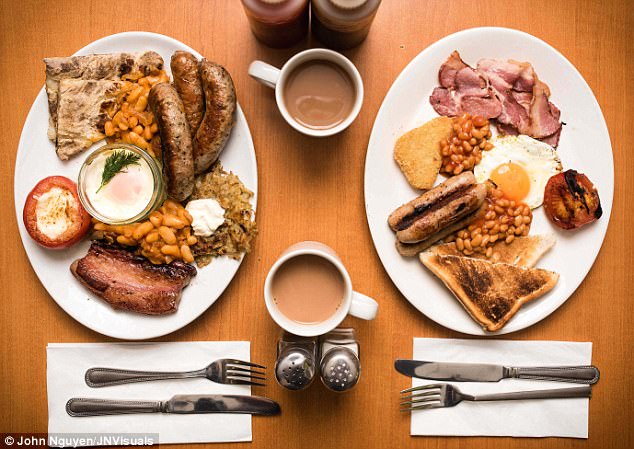 Several ingredients in the traditional Full English (right image) were swapped out for new ones in the researchers’ new breakfast (left). While fried toast and baked beans got the chop, the experts brought in Irish potato farls and French cassoulet to replace them

During their research, the scientists found more than 26 ancestral strains running through the average English person’s DNA.

While they only included regions with DNA shares above one per cent in their new breakfast, the team also found South Asian (0.6 per cent), Nigerian (0.25 per cent) and Middle Eastern (0.25 per cent) genes present. 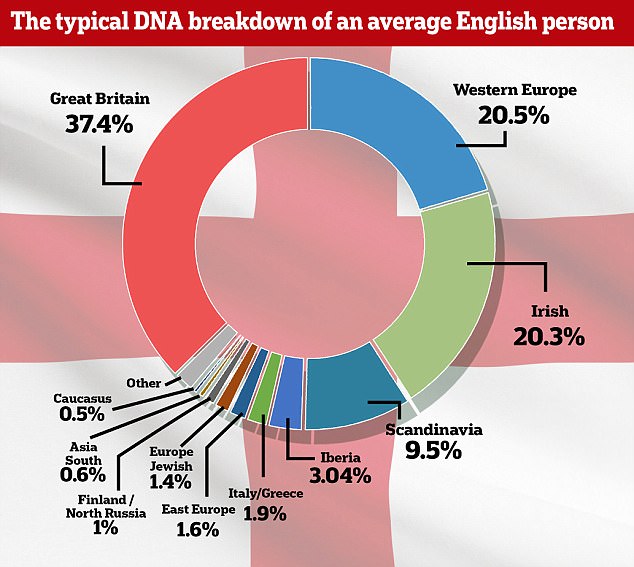 While they only included regions with DNA shares above one per cent in their new breakfast, the team also found South Asian (0.6 per cent), Nigerian (0.25 per cent) and Middle Eastern (0.25 per cent) genes present

Talking about the project, Masterchef 2017 finalist Steve Kielty, who helped curate the breakfast, said: ‘I was surprised to learn that your average English person has all these different ethnicities present within their DNA.

‘In terms of how this translates to food, it was quite a challenge to incorporate the wide range of regions whilst still ensuring the breakfast looked and tasted good.

‘We know people hold the full English breakfast very close to their heart, it’s a national institution, which is why we chose this dish to illustrate the diversity of the country, and I’m hoping this version gets people talking about what DNA can tell us about ourselves.’ 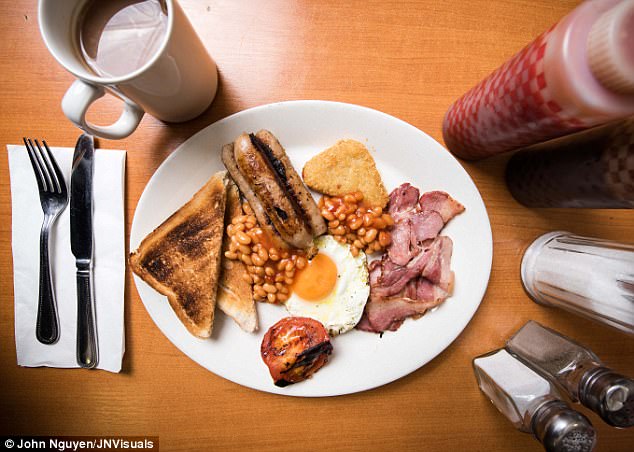 The researchers, from AncestryDNA, found that DNA from Great Britain makes up only 37 per cent of the average Englishman. They say ingredients in the traditional English dry-up (pictured) should be swapped out to represent modern English genetics