As members of Congress grilled tech titans Tuesday on bipartisan antitrust questions, an attorney for one of the companies had to be reminded he was under oath.

Nate Sutton, an associate general counsel at Amazon, said his company doesn’t use ‘individual data to directly compete’ with third-party sellers that use its platform to reach the same customers they target.

Rhode Island Democratic Rep. David Cicilline, who chairs the subcommittee, was skeptical. He believes Amazon uses the data it collects about popular products to direct consumers to Amazon’s own offerings.

Cicilline reminded Sutton twice that he had sworn to tell the truth. 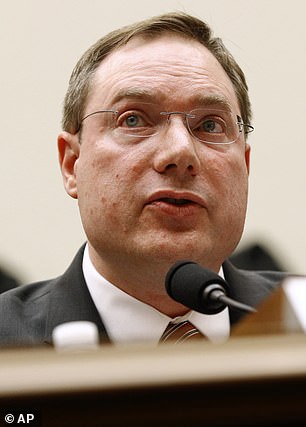 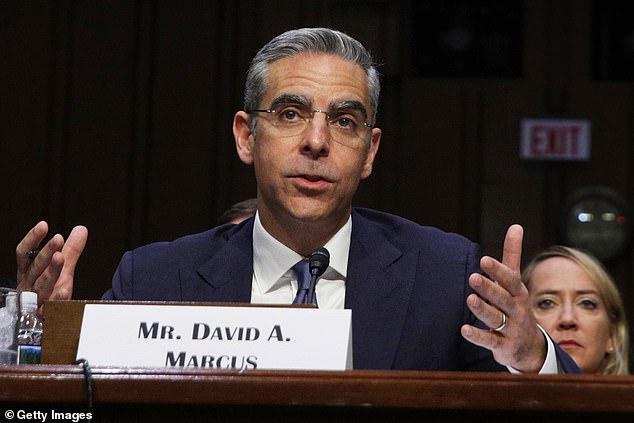 Matt Perault, the company’s head of global policy development, said the social media giant is an ‘American success story’ that happily competes in all the areas where it does business.

Perault emphasized all the ways in which Facebook doesn’t dominate the field.

The company, he pointed out, takes in less than one-quarter of U.S. advertising spending. And he said 92 percent of advertising transactions in the country happen ‘off Facebook.’

Facebook will report its quarterly earnings next week. that could show sharp revenue growth as the company seeks ever-larger shares of the global advertising market.

Cicilline argued on Tuesday that Congress and antitrust regulators have been wrong in allowing the biggest Silicon Valley firms to regulate themselves.

That, he said, has enabled Facebook, Apple, Google and Amazon to grow past the point where regulatory agencies can rein them in, allowing them to dominate the Internet and choke off online innovation and entrepreneurship.

Rep. James Sensenbrenner, a Wisconsin Republican, said the investigation could easily generate a gratuitous and unhealthy level of government control. 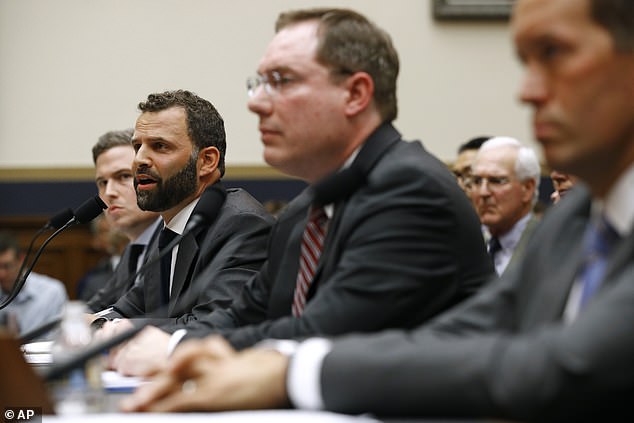 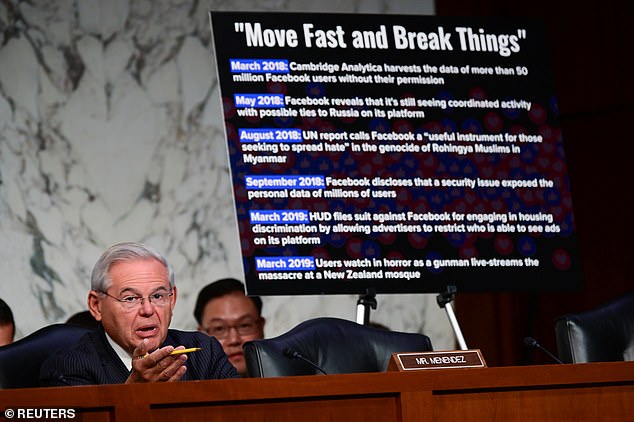 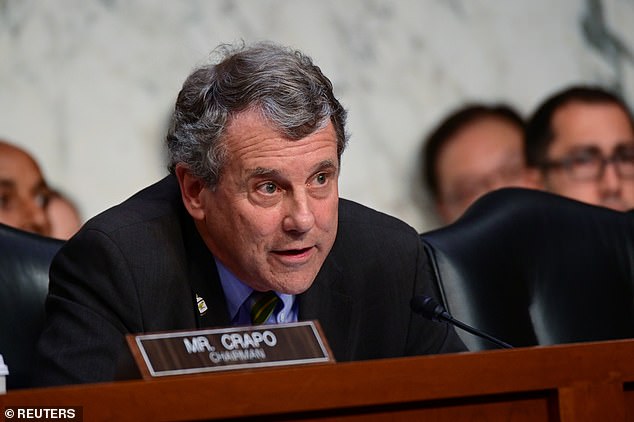 Ohio Sen. Sherrod Brown, the Senate Banking Committee’s ranking Democrat, said it’s hard to trust Facebook after a series of privacy scandals. He says it ‘takes a breathtaking amount of arrogance’ to think it can run its own bank 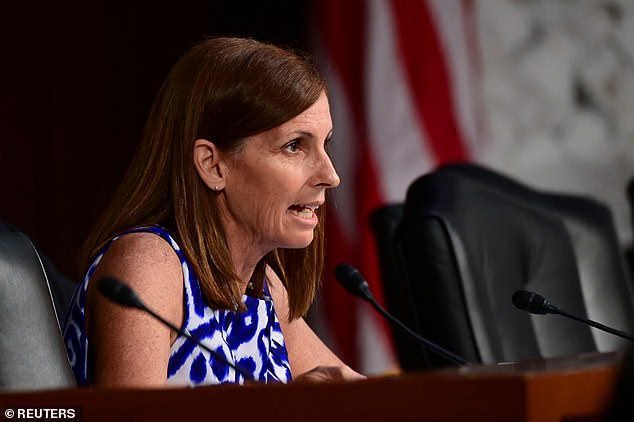 ‘Just because a business is big doesn’t mean it’s bad,’ Sensenbrenner said Tuesday. He argued that breaking up big companies could hurt smaller firms around the U.S. and might compound privacy problems.

On the other side of the Capitol, a Senate panel examined Facebook’s plan for a new digital currency.

Ohio Sen. Sherrod Brown, the Senate Banking Committee’s ranking Democrat, said it’s hard to trust Facebook after a series of privacy scandals. He says it ‘takes a breathtaking amount of arrogance’ to think it can run its own bank.

‘Facebook is dangerous,’ Brown said. He sought assurances from Facebook executive David Marcus that the plan wouldn’t jeopardize the privacy of its billions of users’ data.

Marcus assured him that Facebook ‘will take the time to get this right’ and welcomes an extensive review by federal regulators.

Committee Chairman Mike Crapo, an Idaho Republican, questioned why Facebook wants to base the project in Switzerland.

Brown pressed Marcus on whether he and his team would accept their salary in the new currency, Libra.

Marcus said that while Libra is not meant to compete with bank accounts, yes, ‘I would trust all my assets in Libra.’

And he explained that if another country’s tech titans were to build a successful digital currency first, the resulting system might be out of reach of U.S. regulations and sanctions.

WHAT DO WE KNOW ABOUT FACEBOOK’S LIBRA CURRENCY?

Libra is the name of the new cryptocurrency Facebook is backing which will launch in 2020, and once in circulation will be used to buy service digitally from a user’s smartphone.

The digital currency will be stored in a digital wallet called Calibra, a standalone app on a user’s smartphone or housed within Facebook-owned services such as WhatsApp and Messenger.

It has been backed by Visa and Mastercard, as well as businesses such as Uber, Spotify and eBay meaning eventually users will be able to use the currency to pay for almost anything from their weekly shopping to an Uber journey or their Spotify subscription.

How does cryptocurrency work?

Cryptocurrencies are entirely digital forms of money which use encryption to carry out transactions securely and in many cases anonymously between two parties, which many argue make it more secure against fraud.

A key benefit of cryptocurrency is also that they are decentralised, meaning that no one entity controls the currency in contrast to how a central bank controls traditional currency.

The currencies are often built on blockchain networks, a type of digital ledger technology where all transactions are publicly verified and recorded and can not be altered – creating a chain of information and improving transparency.

How is Facebook’s different?

The two biggest issues for cryptocurrency so far, Facebook argues, have been scalability and volatility. Bitcoin, for example, has seen its price fluctuate violently in recent years as its price is linked to supply and demand.

However, Libra is to be backed by a reserve of assets – including linking it to several international currencies – from a number of central banks in order to keep its pricing stable.

The developers have said that launching it through Facebook apps will also make it immediately accessible to more than two billion people globally – the number who use a Facebook app each month.

How can users buy Libra?

When the Calibra wallet for Libra launches, those wishing to use it will need to sign up for an account using a government-issued ID.

Users will then be able to convert their money into Libra and add it to their digital wallet. Once in place, the currency can be used to pay for “everyday transactions, like buying a coffee, buying groceries, or taking public transportation”.

Facebook said initially the new payment system will support peer-to-peer payments between individuals, as well as some other ways to pay for goods and services – for example by scanning a QR code.

The system will eventually be expanded to include integration into point-of-sale systems in stores, which would allow in-store payments that would work in a similar fashion to paying with a debit or credit card or using contactless.

Because it will also be built into WhatsApp and Facebook Messenger, users will also be able to send and receive money between their friends and families just by sending them a message.

This will also work with any businesses they interact with on those platforms, Facebook said.

When will it be available?

Still being finalised in its development, the full system of Libra and its Calibra digital wallet is expected to launch next year. 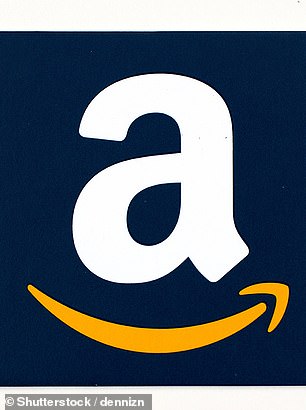 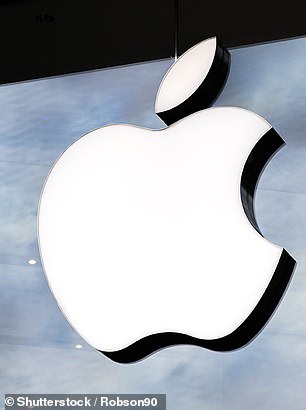 But Hawaii Democratic Sen. Brian Schatz says the question isn’t whether the U.S. should take the lead, but ‘why Facebook’ should be trusted to tackle the concept before it fixes its other problems.

Sen. Catherine Cortez Masto, a Nevada Democrat, asked Marcus how the company can guard against money laundering and make sure terrorists don’t use its currency to finance their operations.

Marcus claimed most criminal activity still depends on cash. ‘It will be better’ if more transactions move to digital, he said, because users of the new Libra currency will have to upload a government ID for verification when they use Facebook’s ‘Calibra’ wallet system.

But President Donald Trump tweeted last week that Libra ‘will have little standing or dependability.’

While the big tech companies appear to have few friends on Capitol Hill, there has been some pushback from Republicans against a proposal by Senator Elizabeth Warren, who is running for president, that Amazon, Facebook and Google should be forced to divest companies that they purchased previously.

‘I don’t think the goal of antitrust law is to break up a big company just because they’re big,’ said Representative Kelly Armstrong, a Republican from North Dakota, on Fox Television. ‘I don’t ever want to penalize any company for success.’