Facebook says it is banning all ads related to cryptocurrencies, including Bitcoin, in an effort to fight scams.

The social media giant said it is barring ads for financial products and services that are frequently associated with ‘deceptive promotional practices’.

The company said this included initial coin offerings and cryptocurrencies.

Initial coin offerings or ICOs are a way for companies to raise funds by selling investors cryptographic assets.

Facebook says it is banning all ads related to cryptocurrencies in an effort to fight scams. The social media giant said it is barring ads for financial products and services that are frequently associated with deceptive promotional practices

Fraud is common in the world of red hot digital currencies such as bitcoin.

This week, for instance, the US Securities and Exchange Commission shut down an initial coin offering by a Texas company called AriseBank.

AriseBank was accused of relying on celebrity endorsers such as boxer Evander Holyfield and social media to cheat investors out of $600 million ($425 million) of its goal of $1 billion (£0.7 billion) for a currency it called ‘AriseCoin.’

‘We want people to continue to discover and learn about new products and services through Facebook ads without fear of scams or deception,’ Mr Leathern wrote.

‘That said, there are many companies who are advertising binary options, ICOs and cryptocurrencies that are not currently operating in good faith.’

Specific examples of banned adverts include ‘Click here to learn more about our no-risk cryptocurrency that enables instant payments to anyone in the world’, writes the Guardian.

A cryptocurrency is a digital currency that can be used for transactions online.

It is the internet’s version of money – unique pieces of digital property that can be transferred from one person to another.

All crytocurrencies use ‘blockchain’ and one can only be made and shared using specific agreed-upon rules. For each cryptocurrency the rules are slightly different.

People can buy bitcoins through exchanges such as Coinbase and Bitfinex.

Bitcoin was the first cryptocurrency, created eight years ago.

Other currencies such as Litecoin and Dogecoin do the same thing but have slightly different levels of inflation and rules surrounding transactions.

Currently around 270,000 transactions are taking place every 24 hours.

These currencies don’t exist as physical or digital objects. They are just a collective agreement with other people on the network that your currency was legitimately ‘mined’.

Blockchain is the record of changes in ownership of in a currency which is broadcast through the network and maintained by computers around the world.

The network works by harnessing individuals’ greed for the collective good.

However, because cryptocurrencies allow people to trade money without a third party getting involved, they have become popular with libertarians as well as technophiles, speculators — and criminals. 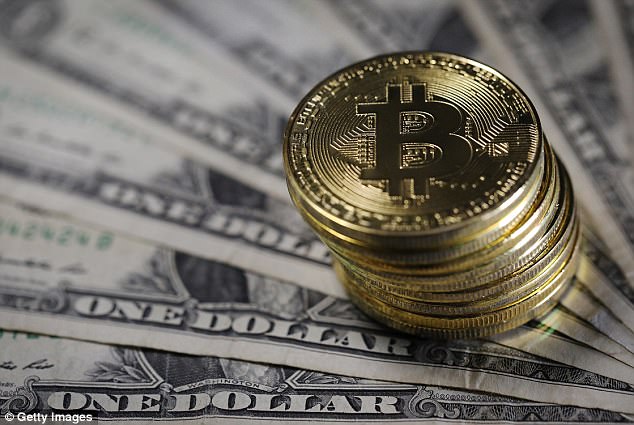 ‘Use your retirement funds to buy Bitcoin!’, was another one fraudulent advert.

Another company said it was raising money to launch a cryptocurrency for labelling fruit and vegetables.

It’s online presence suddenly disappeared and was replaced with the word ‘penis’.

At the moment, the policy applies to adverts on Instagram as well as external websites that are part of the company’s ‘audience network’.

‘This policy is intentionally broad while we work to better detect deceptive and misleading advertising practices, and enforcement will begin to ramp up across our platforms including Facebook, Audience Network and Instagram’, said Mr Leathern.

He said the company would revisit the policy and how it is enforced in the future.

Four investors of Fantasy Market claimed the creator of the digital currency – Jonathan Lucas – has failed to repay their investment despite multiple requests, the New York Post reports.

‘Jonathan Lucas (most likely alias) has scammed us and run off with the cryptocurrency,’ one angry investor told the newspaper.

In his investment plan, Lucas claimed he was attempting to raise up to $25 million (£18m).